Some finds from the garden in our old house. Any suggestions would be welcome. When I found them thought they were just old bits and bobs but may be something interesting, even Roman.

Photos belowof some of the stuff I found in our old back garden. The houses  were built in 1910 or so. As far as I could ascertain before that the area was an orchard, originally in the policies of Inveresk House. There is a Roman bath there although this is quite a way away from the finds (see the map). Not been able to find any history of previous buildings in the gardens. The soil was quite sandy and well drained, and although I dug down about three feet I never came to the end of the topsoil.

I found a lot of pottery, most of it obviously modern, but possibly old stuff as terracotta but could have been remains of garden pots. I left it in the garden when we moved. I am guessing that during the war the gardens would have been dug up for vegetables etc. so assumed that stuff I found was of no antiquity. Since then, however, I am not so sure… 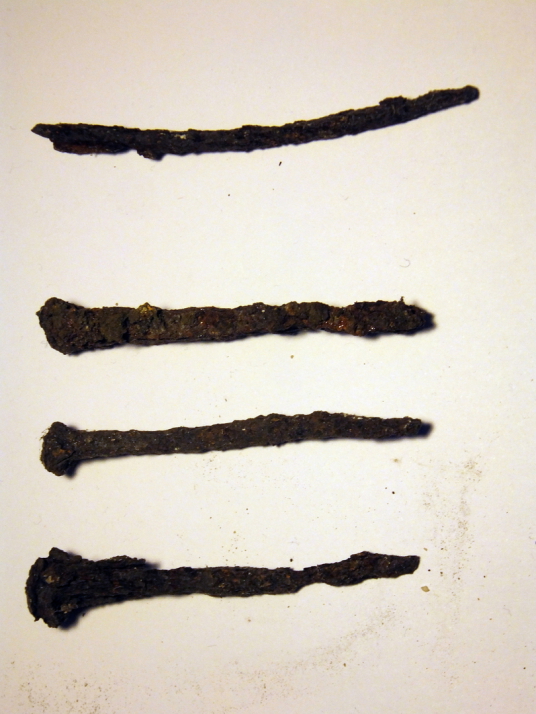 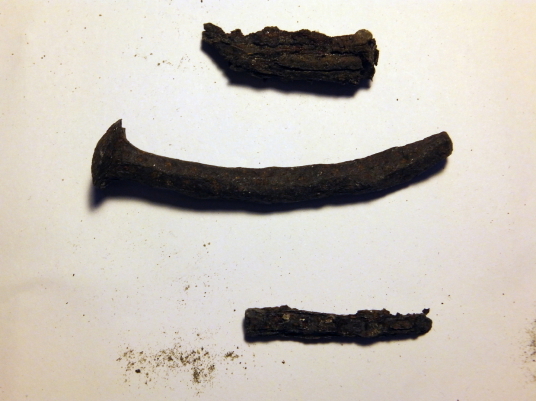 I found these in the same general area no more than 0.3 metres below the top of the soil near a tree.

There appeared to be an area of burning, i.e. the soil was black, but no wood or other stuff apart from (see photos 1 and 2):

Two other bits of metalwork

May have been other bits but some flaked away.

To be honest I just thought somebody had burnt some old furniture or rubbish. 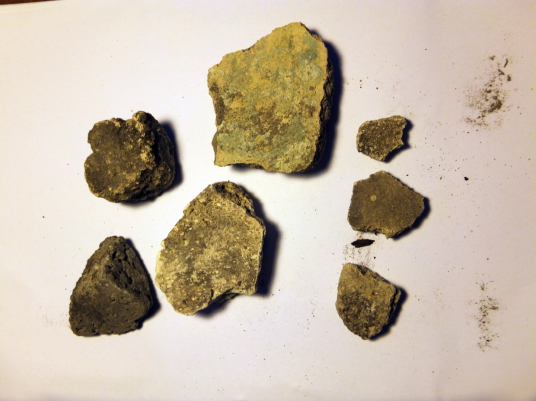 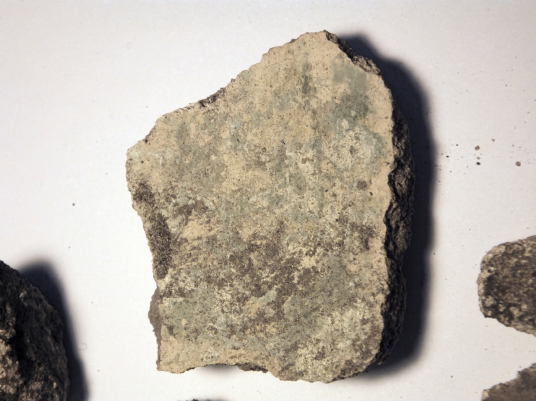 I found these together about 0.5 metres down just by the hedge when burying a dead pigeon or such like. The soil was very dry and loose. The plaster was in the bottom of the hole (see photos 3 and 4). There was no evidence of worked stone or foundations or anything like that. This was as far from the house as you could get so seemed odd that someone would carry it all the way there just to dump it.

The largest bit of plaster is 6 x 5 x 1.5 thick cms, and is quite heavy, dense and strong. There is a ridge on the back. There is a coloured pigment on the flat side, probably blue.

I also found what may have been a part of a brooch or bit of old metalwork, possibly brass or gold, certainly shiny when it came out of the ground. I put it somewhere safe but in the move can’t find it. It found it in the same general area as the nails, and I thought it was brass…