OPEN: The gardens are (or were, see below) occasionally open (house not open).
Web: www.scotlandsgardens.org 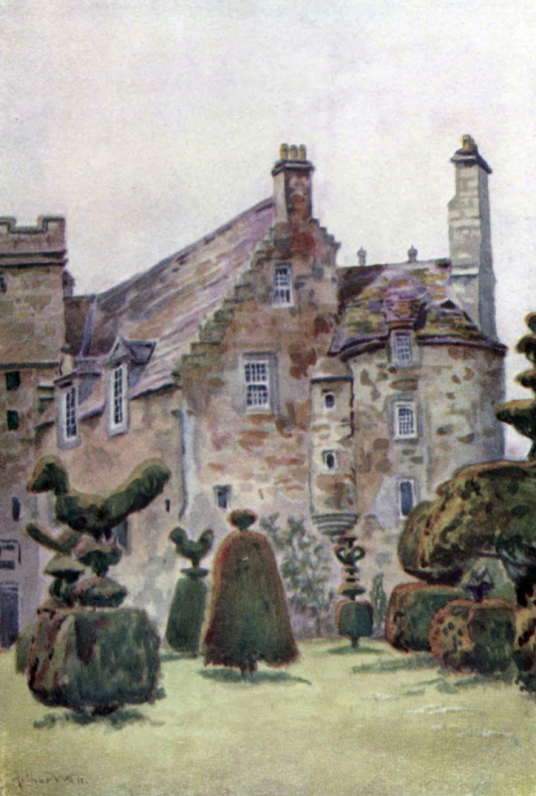 Set in lovely gardens with a topiary lawn, Earlshall is a fine 16th-century courtyard castle. It consists of a main house, occupying two sides, a smaller detached tower of three storeys, the lower two being vaulted, and a range of 17th-century outbuildings. The entrance to the courtyard is by an archway, dated 1546. 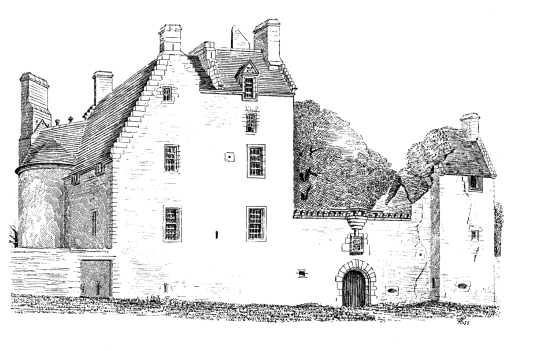 The main house consists of a main block of three storeys and a garret, and a wing. A round stair-tower is corbelled out to square and crowned by a watch-chamber. On the other corner of the main block is a large tower, with a small stair-turret in the angle between it and the principal block, and the sitting room on the first floor also has an old colourful painted ceiling, as has a bedroom on the third floor.
The entrance, in the stair-tower, leads to the vaulted basement. The hall, on the first floor, has a large carved fireplace and panelled walls. On the second floor is a gallery, which has a fine tempera-painted ceiling from the 1620s.
There is a rectangular doocot [NO 465210], which is dated 1599 with the initials A.B. for Alexander Bruce, and a walled garden. 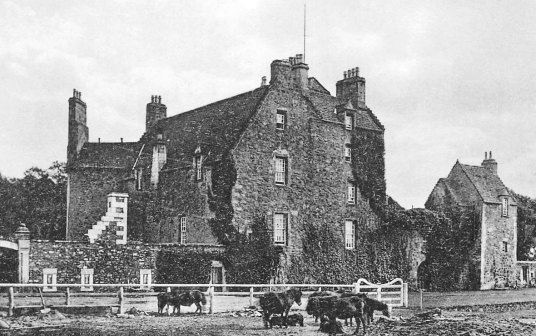 ‘Earleshall’ is marked on Blaeu’s map of Fife, and then on Adair’s map of the east part of Fife when the castle is depicted in enclosed wooded polcies and gardens.
Sir William Bruce built the present castle in 1546, although there may have been a stronghold here before that. Sir William had fought at and, unusually, survived the Battle of Flodden in 1513. Mary, Queen of Scots, visited in 1561, as later did James VI. 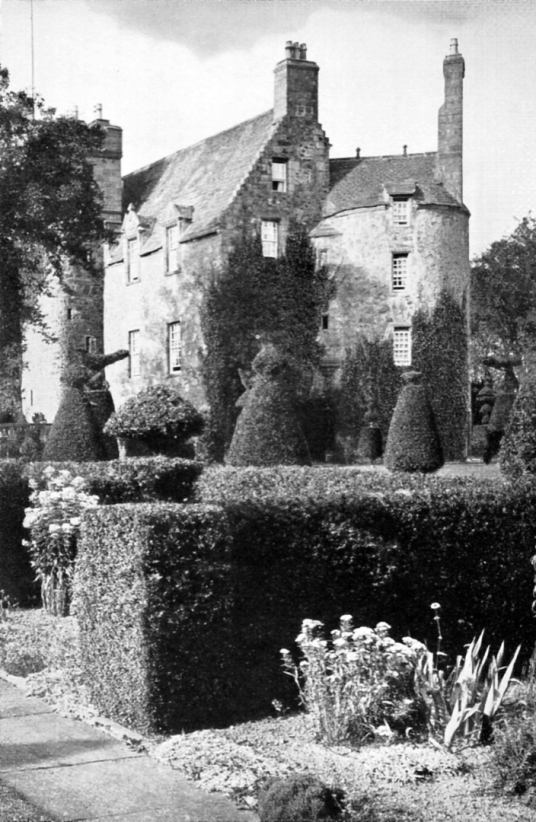 One of the family was killed at the Battle of Worcester in 1651, fighting for Charles II, and another Sir Andrew is known as ‘Bloody Bruce’ as he and his men killed Richard Cameron, a noted Covenanter, at Airds Moss in 1680. Bruce then hacked off Cameron’s head and hands, and took them back to Edinburgh, where he had them brought before the council.

The castle went by marriage to the Hendersons of Fordell in 1708, but was sold because of debt in 1824 to the Long family. The house was then occuppied by farm workers and fell into disrepair, to be sold again in 1890. 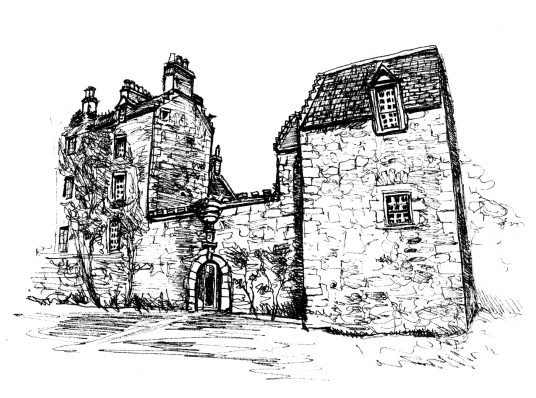 The castle was restored for R. W. R. Mackenzie by the architect Sir Robert Lorimer in 1892. The gardens were relaid, and the fine formal garden replanted, designed by Lorimer. The castle was held by the Baxters for some years, has been sold several times in the 20th century, including in 1994, and is still occupied. The property with 34 acres of policies was on the market in February 2016,

The castle is said to be haunted by the ghost of Sir Andrew Bruce, the Bloody Bruce, and his footsteps are reportedly heard on the stairs. 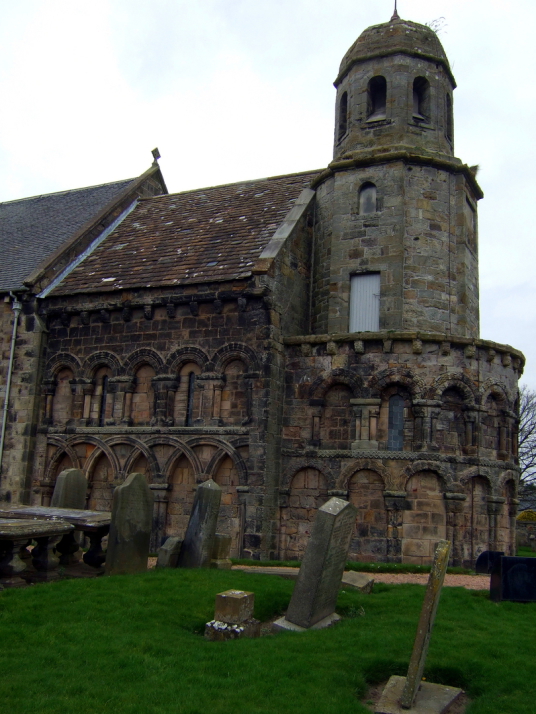 St Athernase Church [NO 455214], is a fascinating and picturesque building, set on a prominent mound in Leuchars, and with the unique Romanesque architecture of the apse and chancel, dating from the middle of the 12th century. 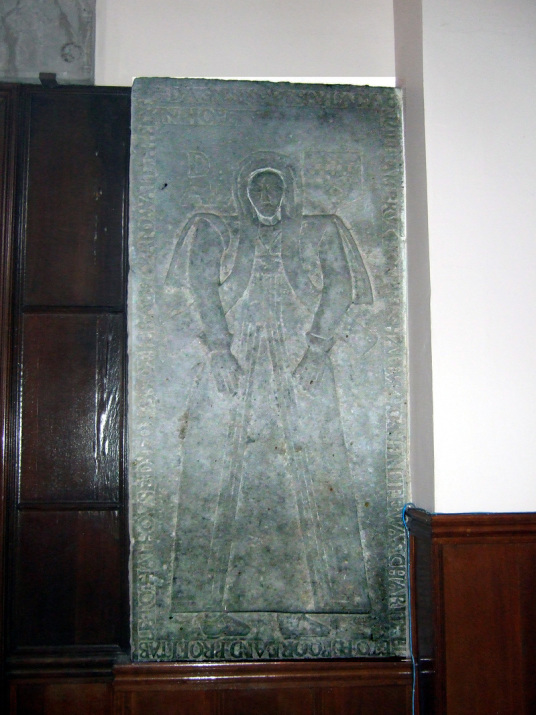 In the church are carved burial slabs, by the south wall, for William Bruce of Earlshall and Dame Agnes Lindsay, his wife, who died in 1635. There are many interesting memorials in the graveyard.