Balvenie Castle is a large ruinous courtyard castle with ranges of buildings enclosed by a strong curtain wall and ditch, in a pleasant and peaceful spot near Dufftown in Moray in northern Scotland. 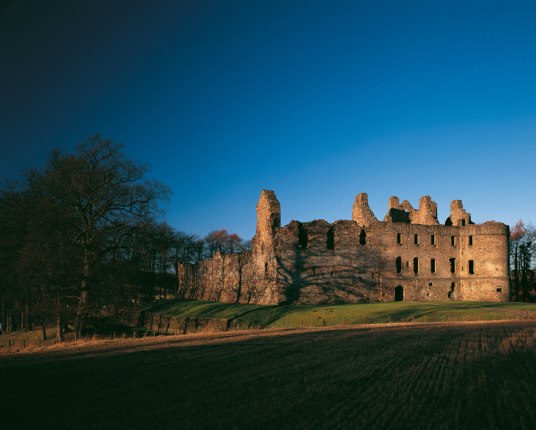 Moray: About 0.5 miles north of Dufftown, on minor road south of B975 just east of junction with A941, west of River Fiddich, at Balvenie Castle. 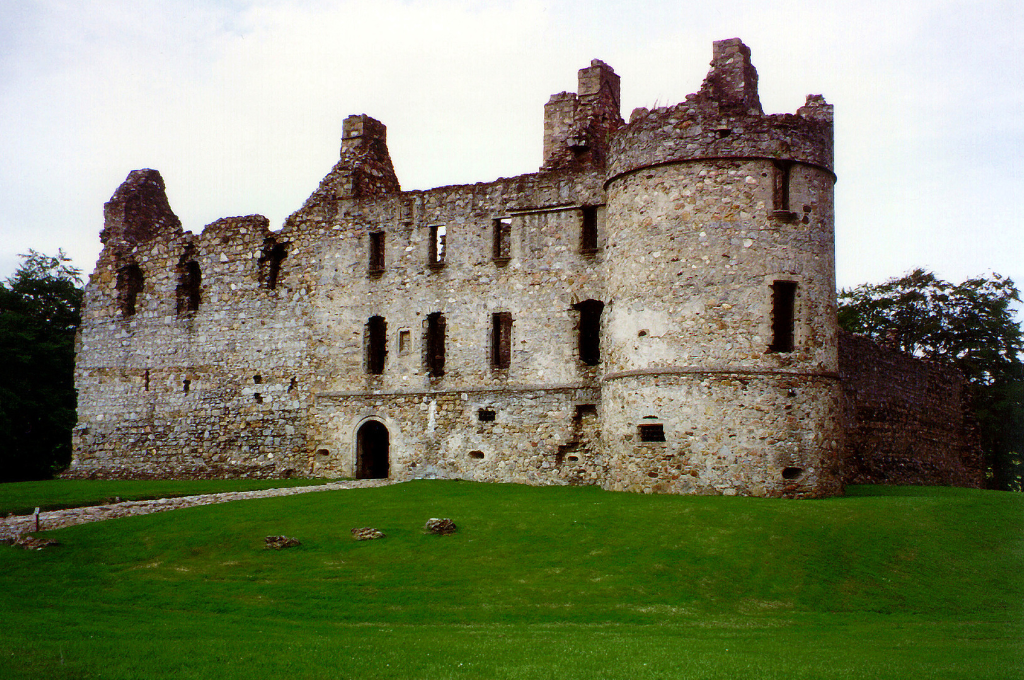 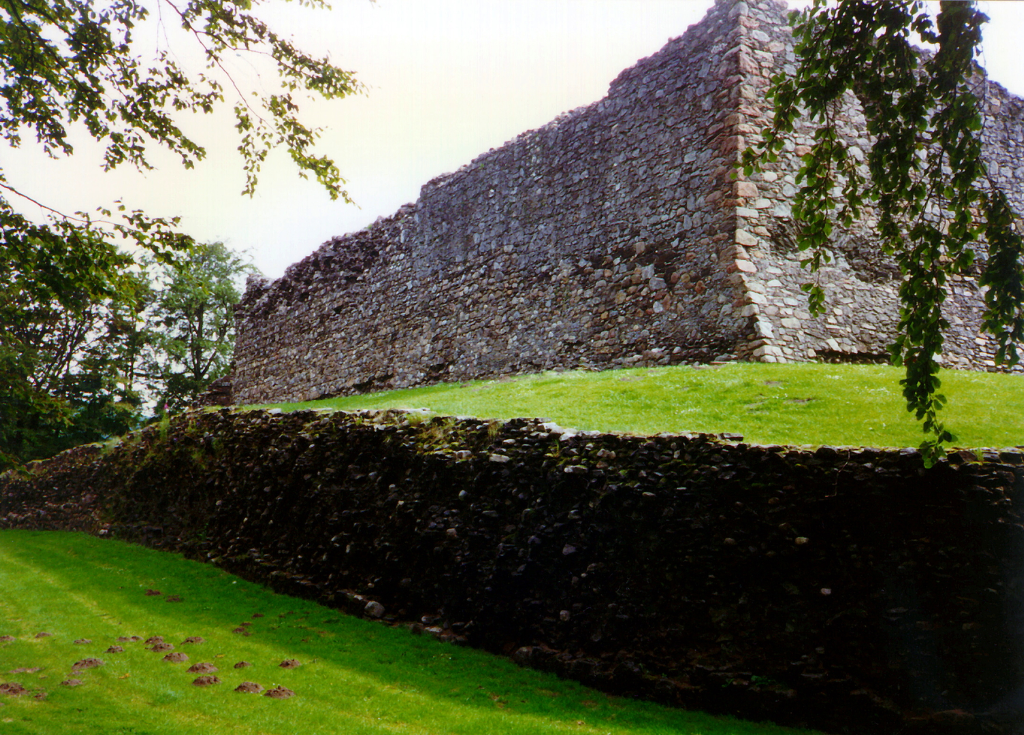 In a pleasant and peaceful location, Balvenie Castle is a large and impressive ruinous courtyard castle, with a 13th-century curtain wall and surrounding ditch, a 16th-century L-plan tower house at one corner, and other 15th-century ruined ranges within the courtyard. The walls are pierced by gunloops. 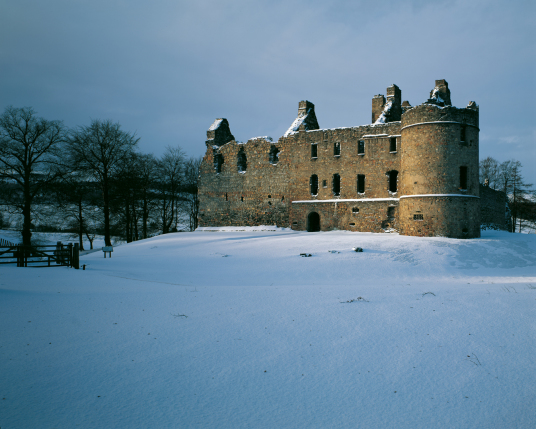 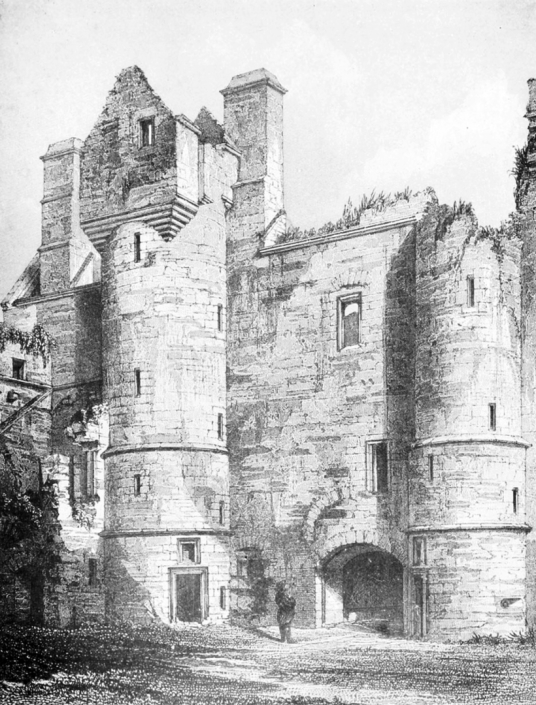 The entrance, still with the original yett, is flanked by a projecting round tower.
The early work contains a massive vaulted cellar and bakery on the ground floor, and a great hall with a pointed vault above. The upper floors are ruined. 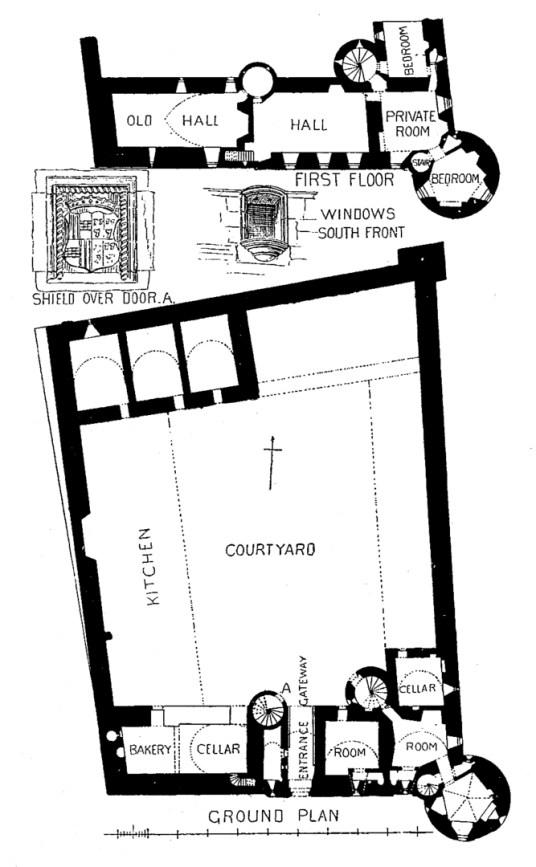 The 16th-century L-plan tower rises to four storeys. It has two stair-towers, the larger of which is crowned by a corbelled-out watch-chamber. The windows are small.
There are three barrel-vaulted cellars, and another in adjoining tower, which has a fine chamber on the first floor over the entrance pend. 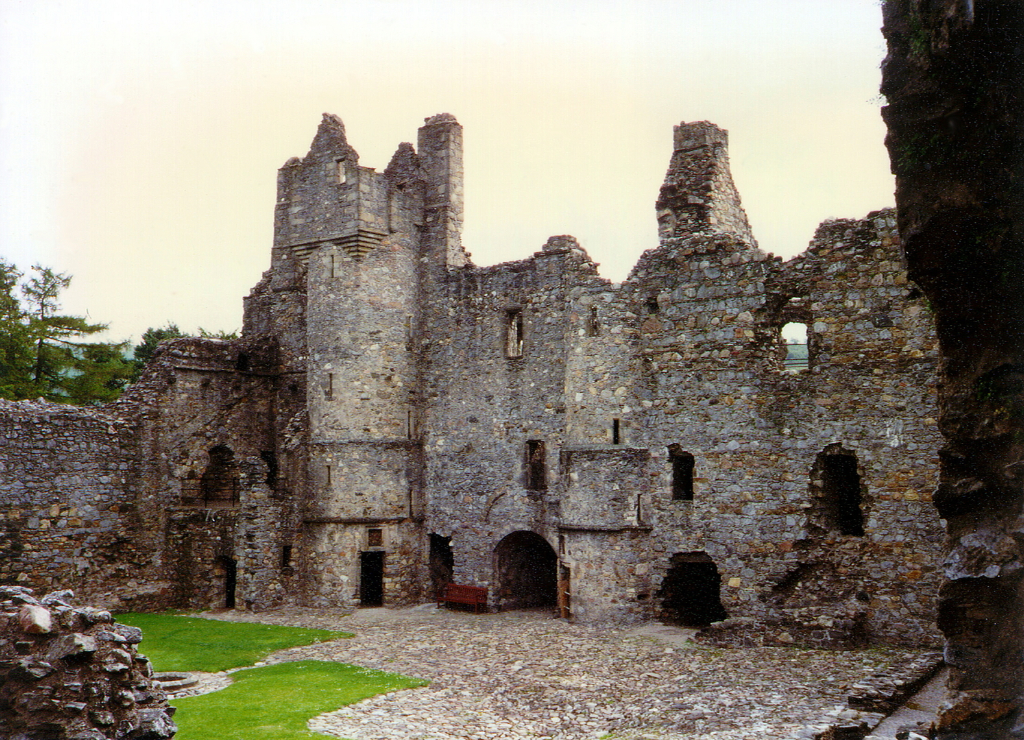 ‘Baluavy’ is marked on Pont’s map of Strathspey and is shown as a large castle with two towers of four storeys with a courtyard or lower ranges. 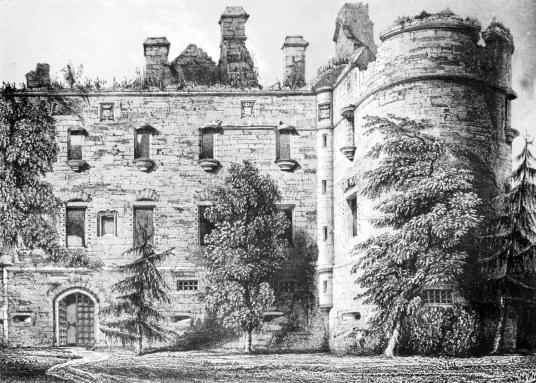 Balvenie passed to the Douglases, who rebuilt the castle, but was granted to John Stewart, Earl of Atholl, by James II following the fall of the Black Douglases in 1455. Mary, Queen of Scots, probably visited in 1562. 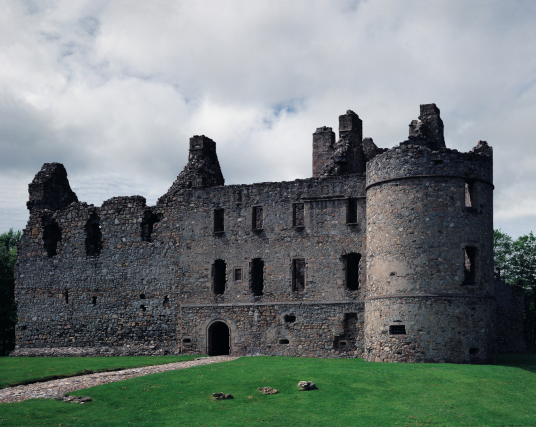 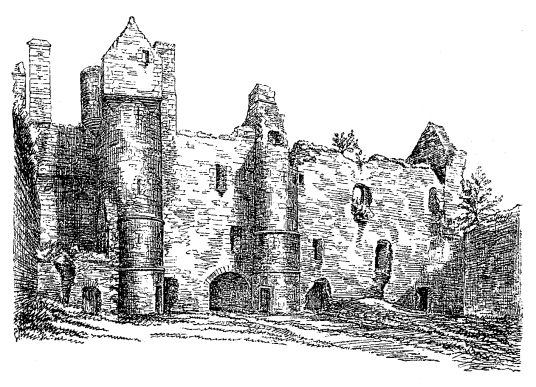 The Comyns built the first castle, then called Mortlach, which was destroyed or much reduced by the forces of Robert the Bruce in 1308 after having been visited by Edward I in 1304. 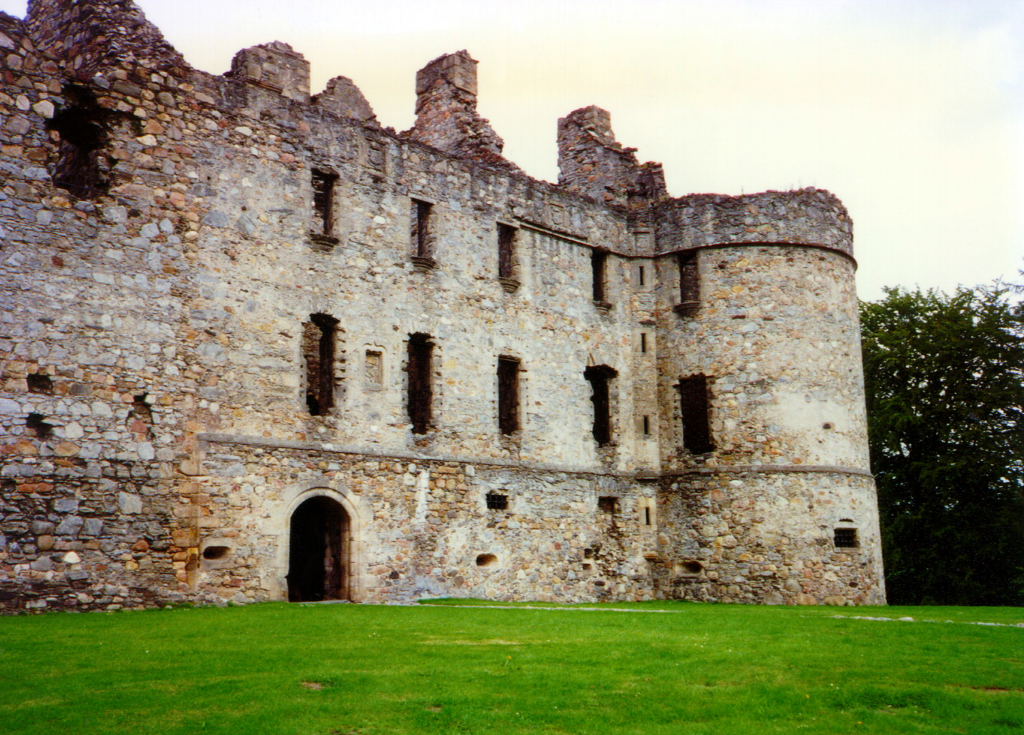 In 1614 Balvenie was sold to Robert Innes of Invermarkie, and the family were made baronets of Nova Scotia in 1628. The castle was used by the Marquis of Montrose during his campaign against the Covenanters in 1644-5. Sir Ludovic Gordon of Gordonstoun had a ratification of 1648 which mentions the tower, fortalice, manor place, orchards, yards and mains of Balvenie. 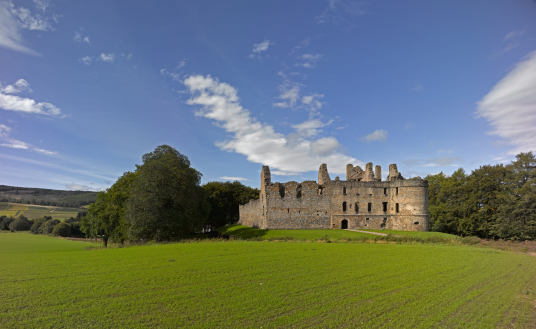 It was near the castle that a Covenanter force, led by Alexander Leslie, defeated a Royalist army in 1649, taking 900 prisoners. The Innes family suffered much by supporting the Royalist side in the Civil War, and had to sell the property to the Duffs of Braco in 1687. 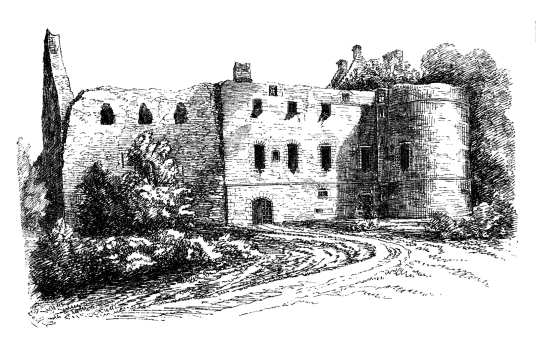 The castle was held by the Jacobites in 1689, but in 1715 was held against them by the Duffs. It was not occupied after William Duff committed suicide here in 1718, and was unroofed by 1724 – although a Hanoverian force, under the Duke of Cumberland, briefly held it in 1746. The ruins were put into the care of the State in 1929. The line of the Inneses of Balvenie, baronets, continues and they now live in Hampshire in England. 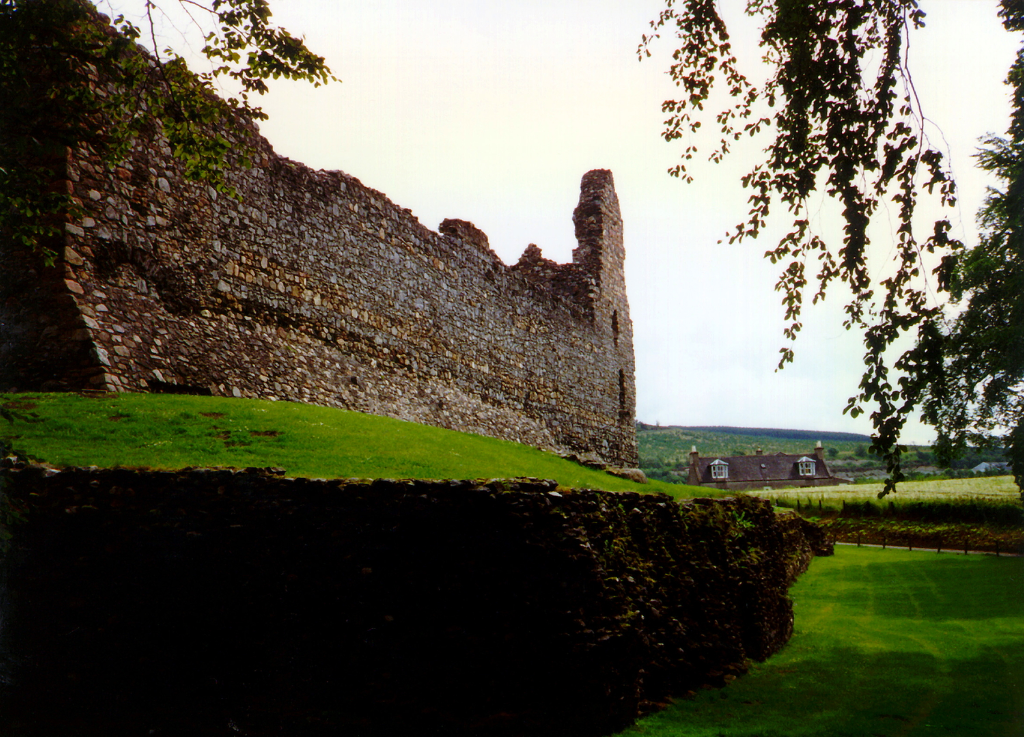 The castle is said to be haunted by a ‘White Lady’, as well as a groom and two horses and other disturbances.