Skipness Castle, a large and scenic tower and courtyard overlooking Kilbrandon Sound and Arran, long held by the Campbells and near Tarbert in Kintyre on the west coast of Scotland. 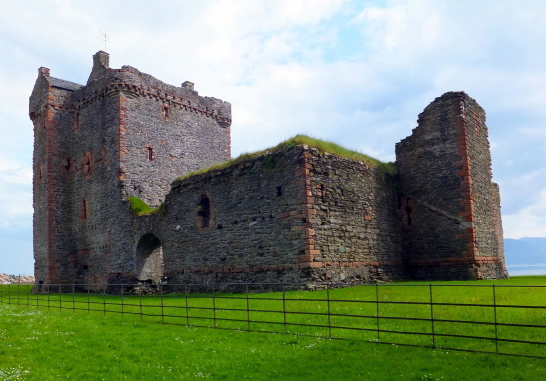 Argyll & Dunbartonshire: About 8 miles south and east of Tarbert, on minor road east of end of B8001 at Skipness, north of sea at Skipness Bay, at Skipness Castle.

OPEN: Access at all reasonable times: short walk to castle, then walk to chapel which may be muddy. The tower is open Apr-Sep, but closed Oct-Mar.
Web: www.historicenvironment.scot 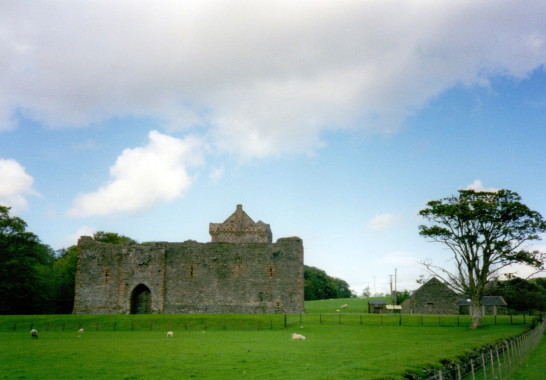 With fine views over the Kilbrannan Sound to Arran, Skipness Castle is a 13th-century (or earlier) castle of enclosure, later consisting of a courtyard with a curtain wall with a tower house and ranges of buildings. The wall has three ruined towers. The main entrance was from the sea, which was defended by a gatetower, with a portcullis and machicolation. 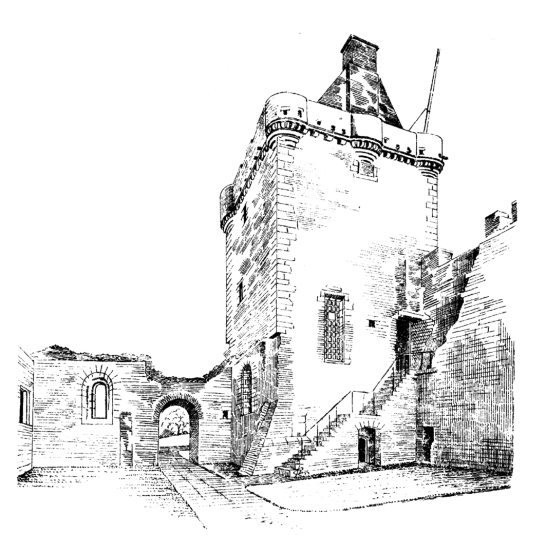 The 16th-century tower house rises to four storeys and a garret, and incorporates the late 13th-century tower or earlier hall-house. The parapet has open rounds at three corners, and a gabled caphouse at the other. The basement is vaulted, and has no access to the floors above. The hall is reached by an external stone stair. A mural stair climbs to the second floor. 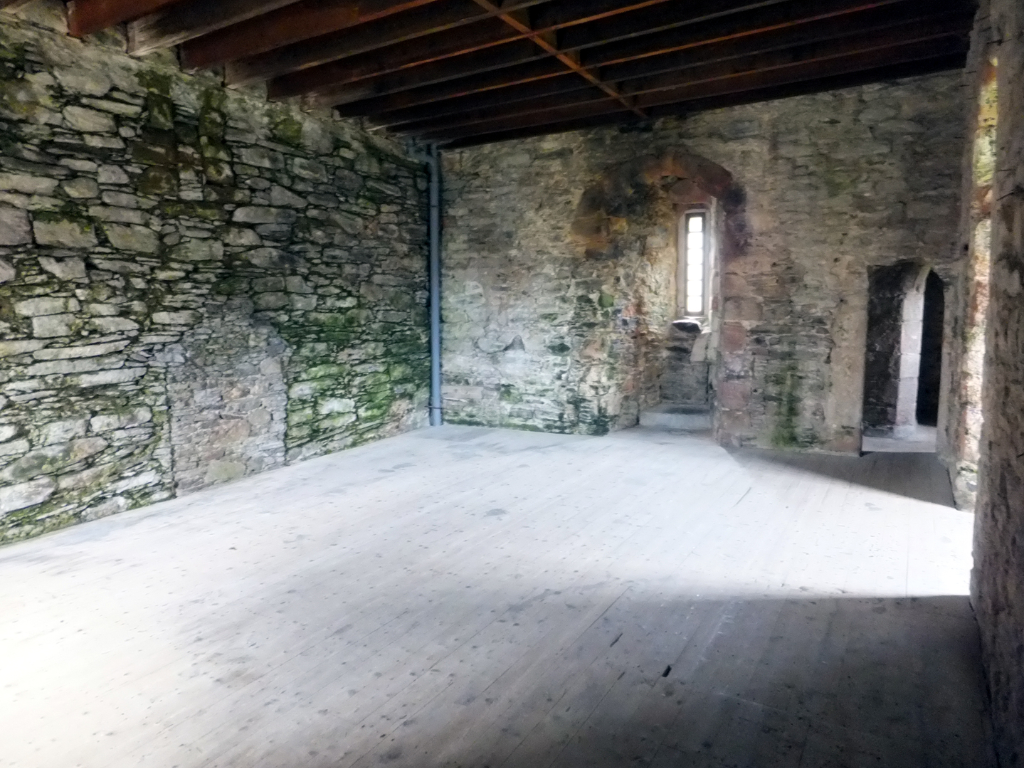 ‘Skibbenes’ is marked on Blaeu’s map of Kintyre, although (surprisingly) it is given no prominence. 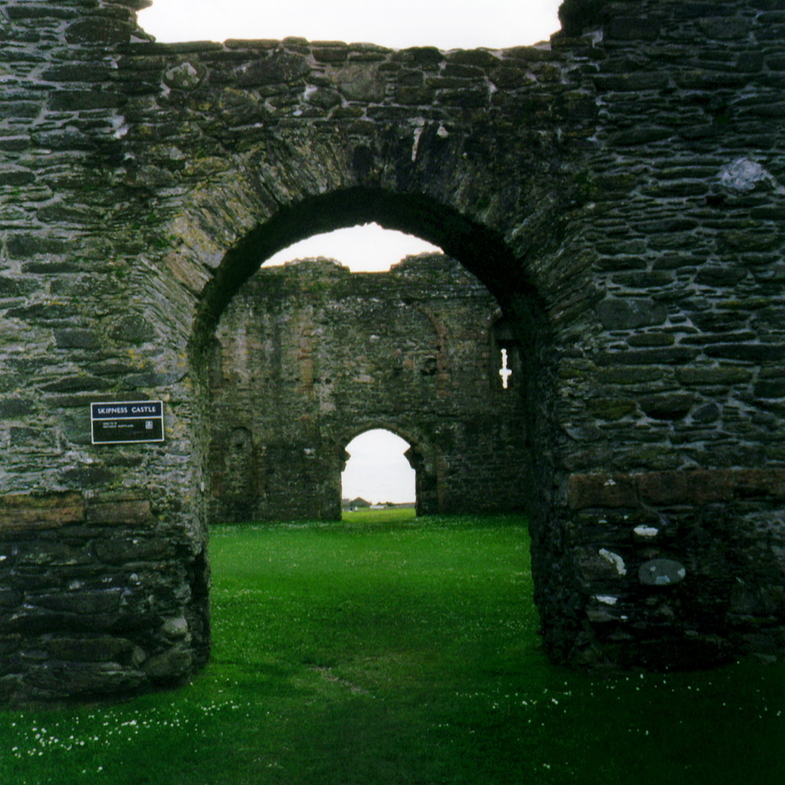 The first castle was probably built by the MacSweens around 1247, and it was strengthened against the Vikings about 1262. It was held by the MacDonald Lords of the Isles until 1493, when they were forfeited. 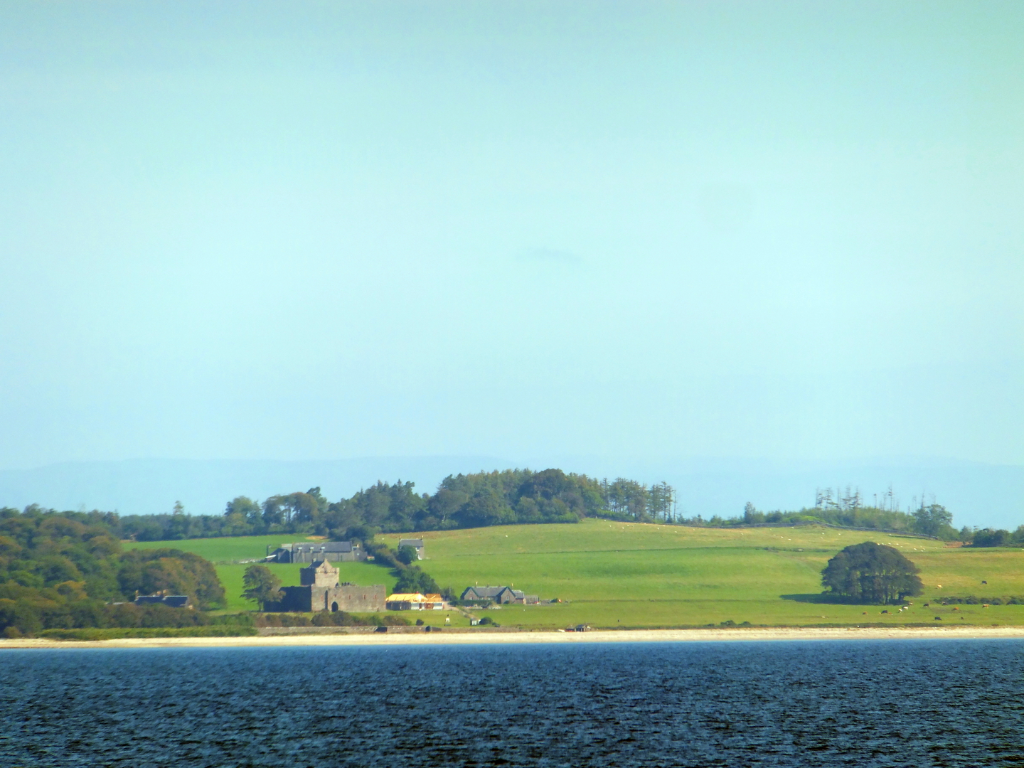 The castle was then granted to the Forresters, but in 1499 it was acquired by the Campbell Earl of Argyll, and was then held by the Campbells of Skipness. Walter Campbell of Skipness was the second husband of Janet Douglas, Lady Glamis. Along with his wife and her infant son, he was imprisoned in Edinburgh Castle on the orders of James V in 1537 on trumped-up charges of treason, poisoning and witchcraft. All three were sentenced to death, but Walter tried to escape, falling to his death. Janet was later burned alive, although her son was eventually released on the death of James V and inherited the Glamis properties (see Glamis Castle). 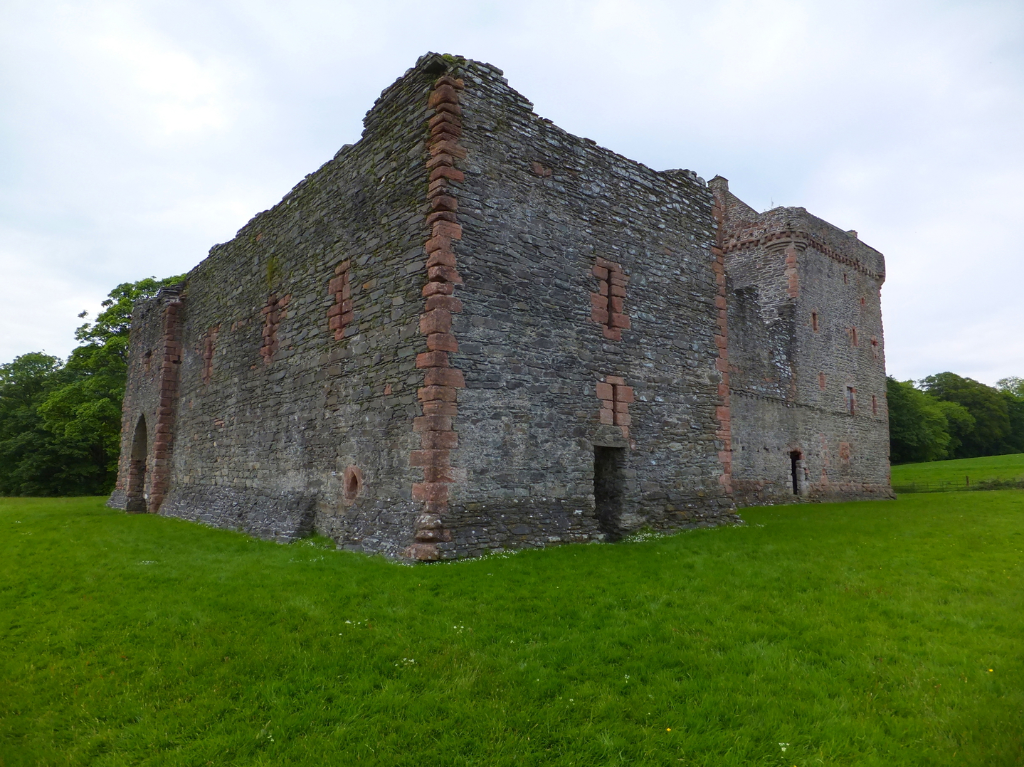 It was besieged unsuccessfully by Alaisdair Colkitto MacDonald in the 1640s, and Walter Campbell of Skipness seized Tarbert Castle from the Campbell Earl of Argyll in 1685 during the rebellion by Argyll. Skipness Castle was abandoned at the end of the 17th century, then being used as a farm steading with the demolishing of the early courtyard buildings. Angus Campbell of Skipness is on record in 1715 when he signed an oath of allegiance to George I. 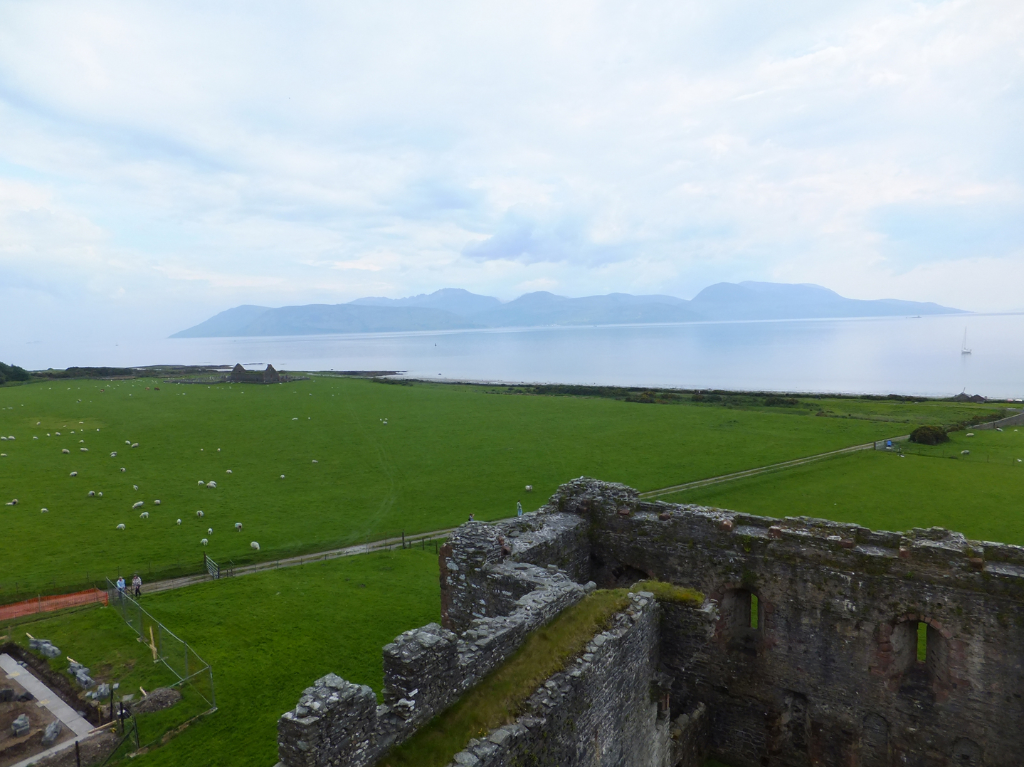 Skipness Castle: Arran from the battlements, Kilbrannan is to the left (© Martin Coventry)

In 1898 the farm was removed, and the ruins consolidated. Near the castle is Skipness House [NR 907578], built for the Graham family at the end of the 19th century, although it incorporates some of a much older house. It is still occupied. and the estate has been owned by the Oakes family since 1936. The Seafood Cabin is by the house. 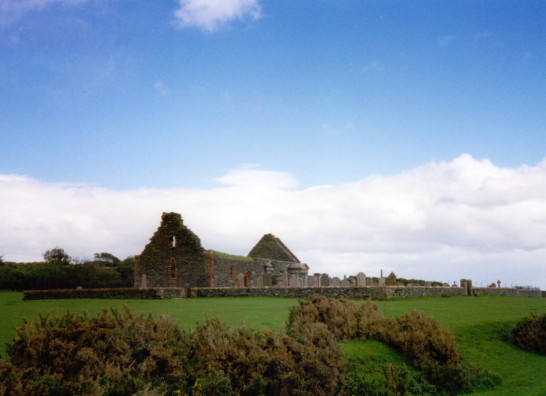 The ruins of a 13th-century chapel, Kilbrannan or Kilbrandon [NR 907577], dedicated to St Brendan, lie to the south-east of the castle. There are fine graveslabs and excellent views across to Arran, and members of the Campbells are buried here. 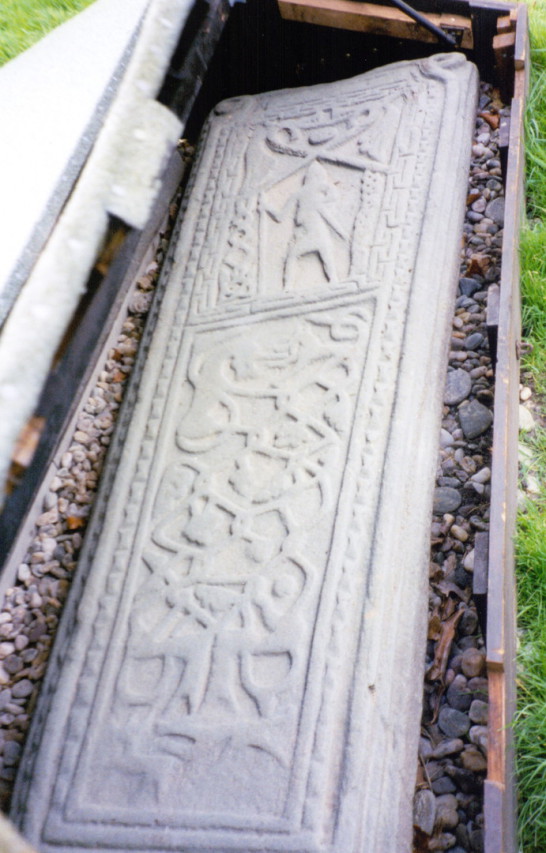 Skipness is said to have a gruagach, a ‘Green Lady’, described as being as small as a child but dressed in green and with golden hair. The spirit would clean and tidy, and feed hens, but it is also accused of nearly killing a man it believed was sleeping in the wrong bed. The ‘Green Lady’ is also said to have thwarted an attack on the castle, by spreading confusion amongst the besiegers.