Kellie Castle is a large and an attractive old tower house, once held by the Oliphants and then the Erskine Earls of Kellie, set in a beautiful spot with a stunning gardens, near Elie in Fife in central Scotland. 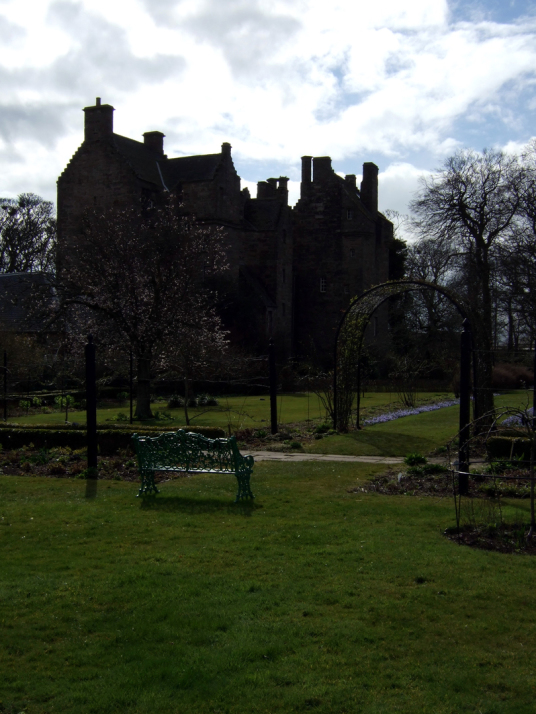 Fife: About 4 miles north and east of Elie, on minor road north of B9171, east of Newton of Balcormo, at Kellie Castle. 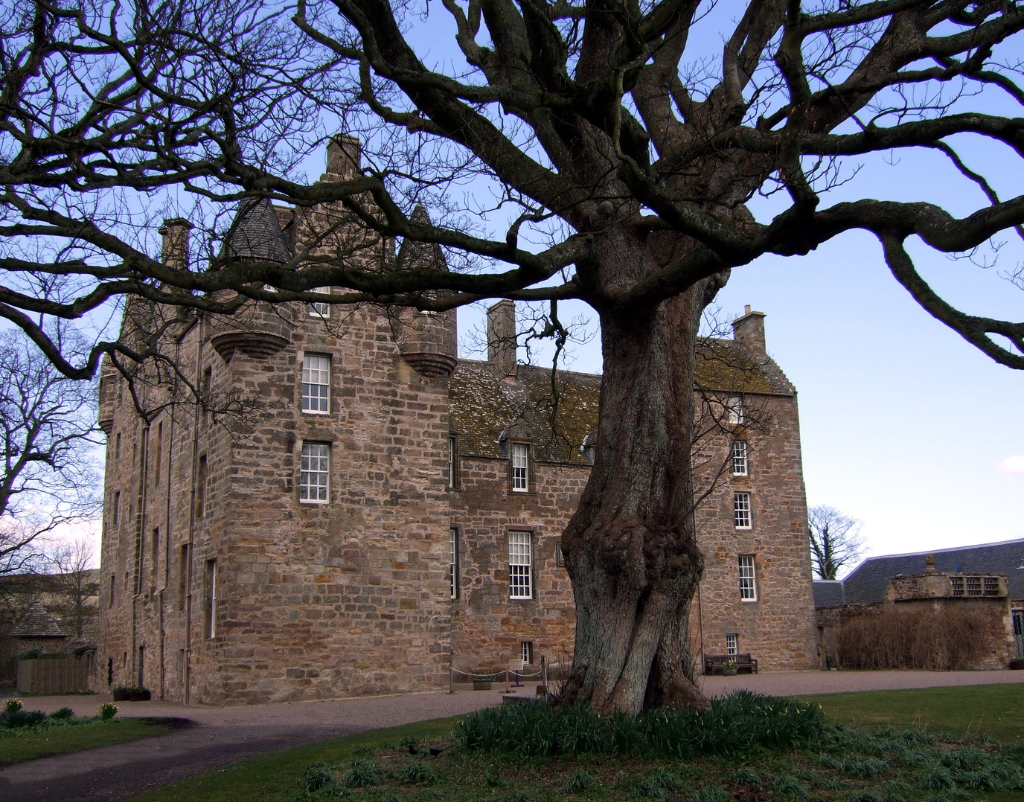 One of the finest castles in Scotland, Kellie Castle is a 16th-century E-plan tower house. It consists of a three-storey main block with three large square towers which form the E. The towers rise to five storeys, and two have bartizans. Two smaller stair-towers project from one side. The oldest part of the castle, one of the towers, dates from the early 16th century (or from 1360), while another tower was added in 1573. The main block and a large tower were added to connect the older parts of the building in 1603-6. 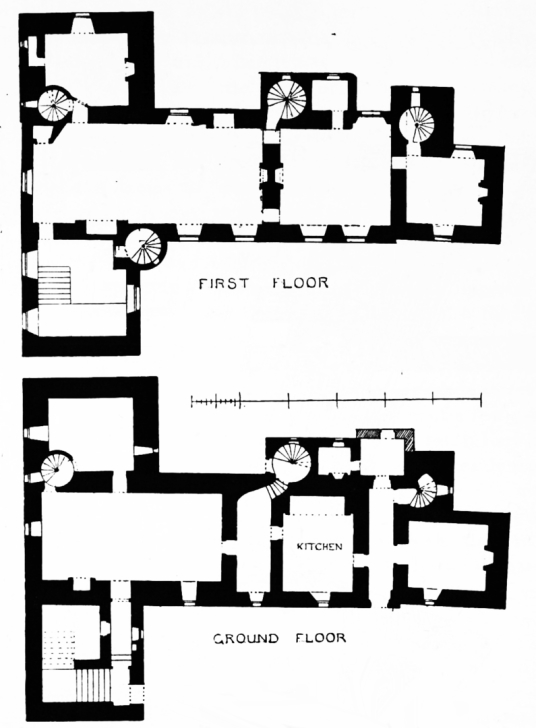 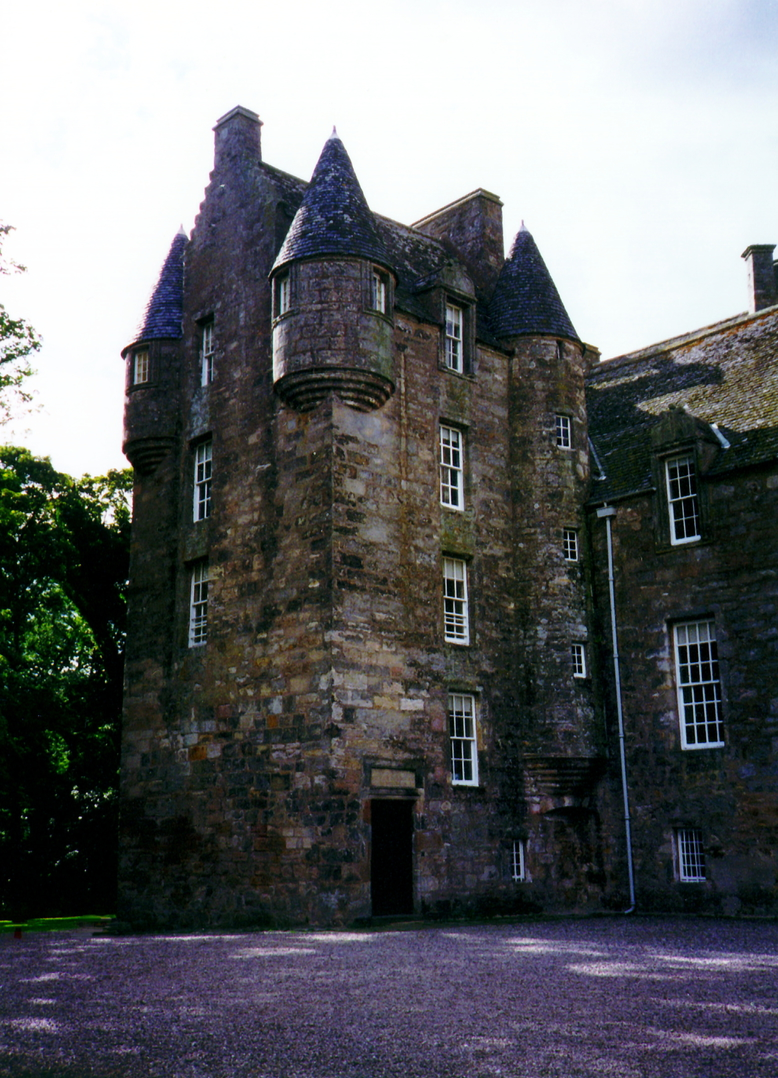 The basement is vaulted throughout the building. A square stair rises, from the main entrance, to the large hall on the first floor. Four turnpike stairs also climb to hall level. 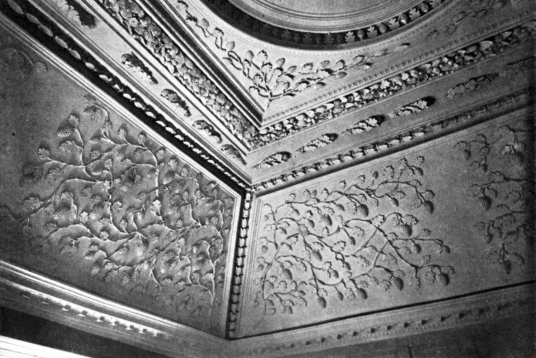 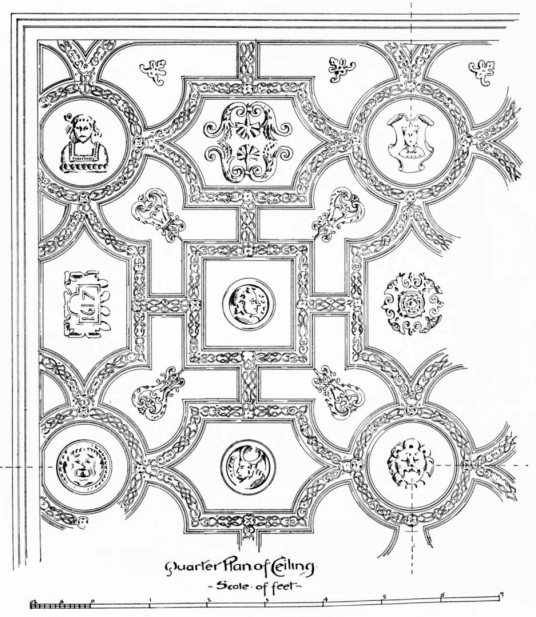 The Vine Room, on one of the upper floors, has a ceiling plastered by De Witt, and there are fine plaster ceilings. A mural by Pheobe Traquair was long covered up but has since been revealed. 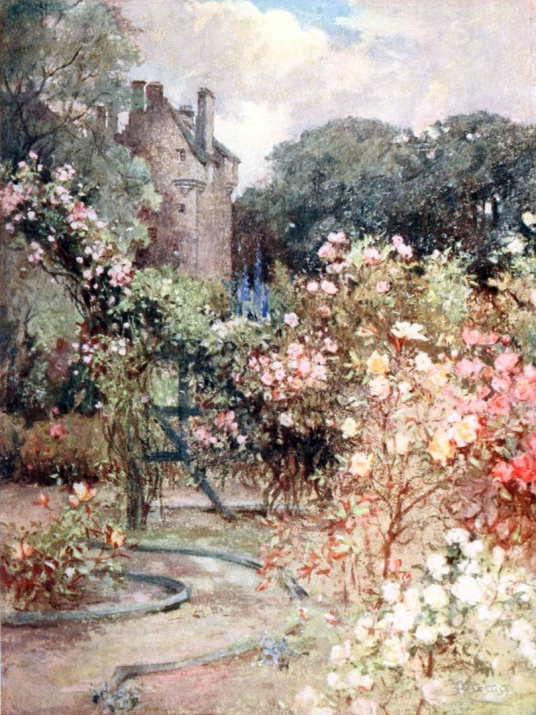 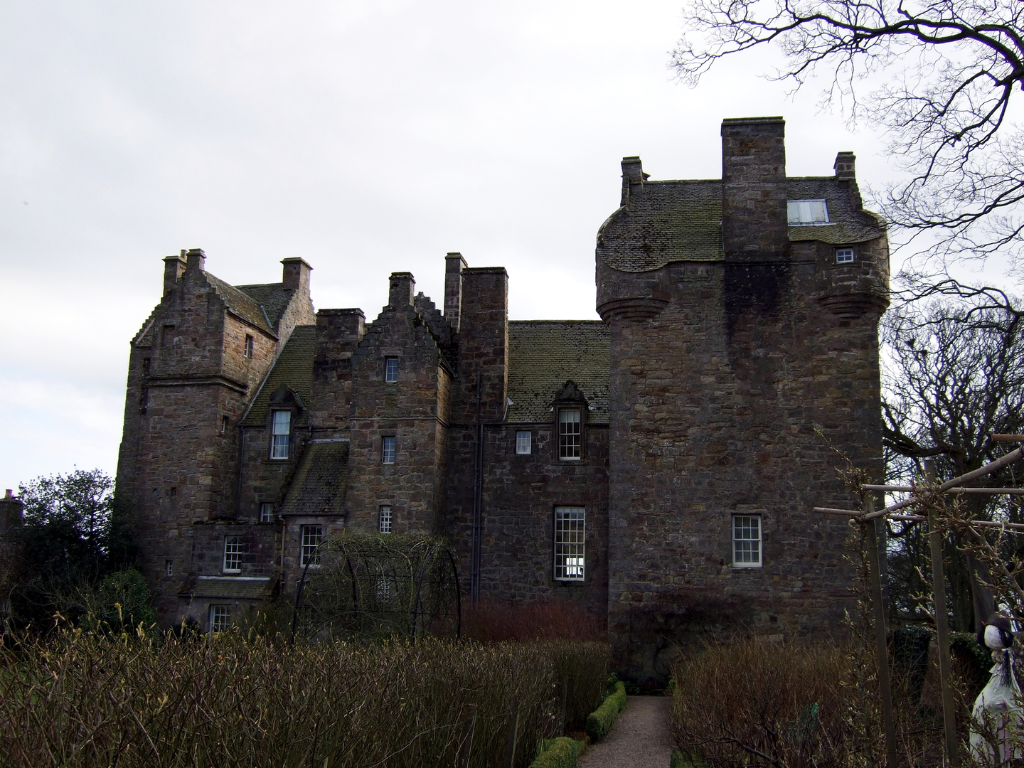 ‘Kelly’ is marked on Blaeu’s map of Fife, then ‘Kellie’ on Adair’s map of the east part of Fife, when depicted in enclosed and wooded grounds. 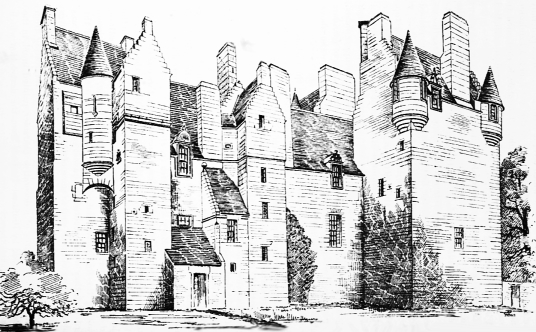 An earlier castle here belonged to the Siwards, but the present castle was built by the Oliphants, who held the lands from 1360 until 1613, when Laurence, 5th Lord Oliphant, had to sell the property. 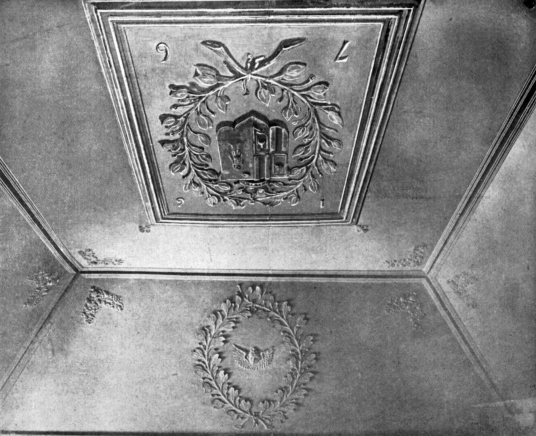 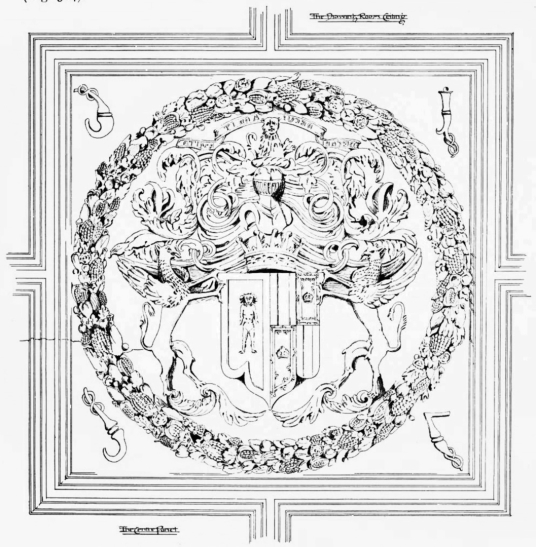 Kellie was bought by Sir Thomas Erskine of Gogar, who was made Earl of Kellie in 1619, a favourite of James VI. Erskine was involved in the Gowrie Conspiracy, and may have been one of those who murdered the Master of Ruthven and his brother, the Earl of Gowrie, at Gowrie House in Perth. Alexander Erskine, 5th Earl of Kellie, was a Jacobite, and had to hide in the stump of a tree for the summer following the Battle of Culloden in 1746. 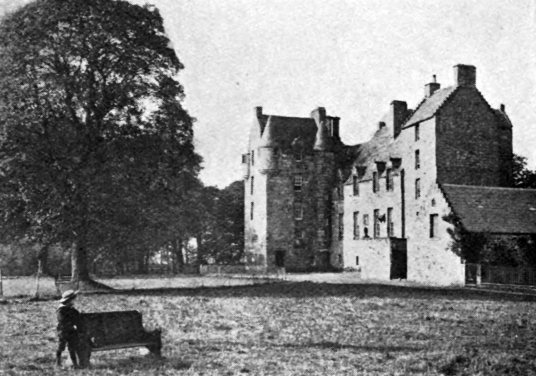 Kellie was abandoned in 1829, but in 1878 James Lorimer, Professor of Public Law at Edinburgh University, leased Kellie as an almost roofless ruin and proceeded to restore it. Robert Lorimer, his son, spent most of his childhood at Kellie, and was later a famous architect. In 1970 Kellie passed into the care of The National Trust for Scotland. 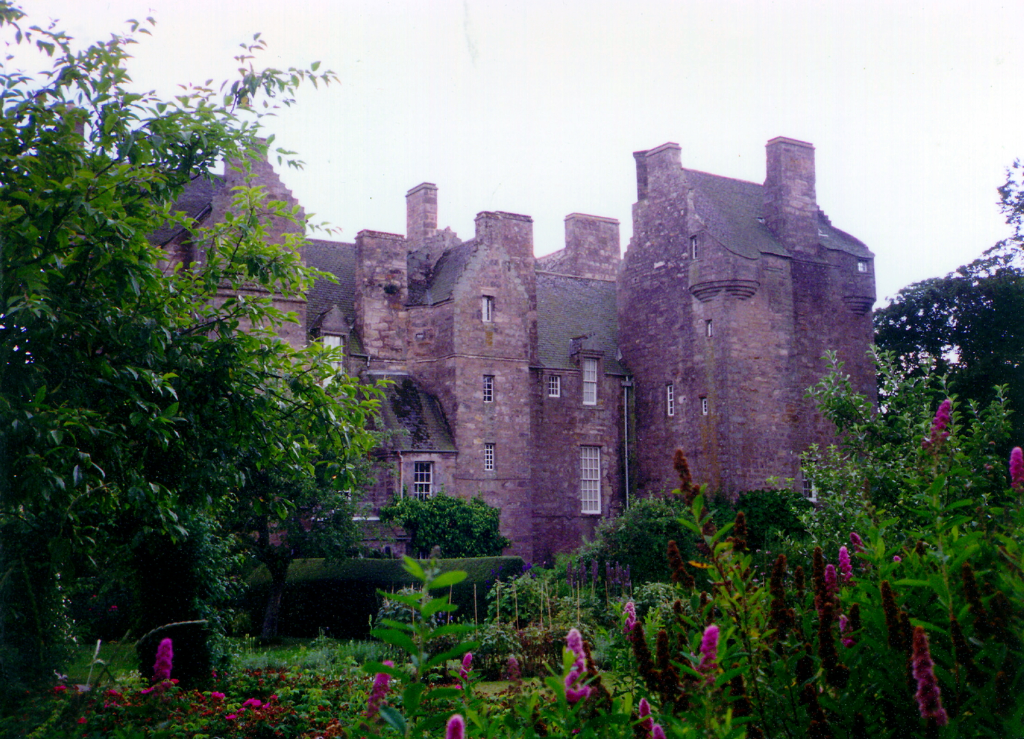 A turnpike stair in the castle is reputedly haunted by the spirit of Anne Erskine, who died by falling from one of the upstairs windows. The ghost of James Lorimer is also said to have been seen seated in one of the passageways.