Shetland: On south-east end of island of Unst in Shetland, on minor roads east of A968, west of Mu Ness, at Muness Castle. 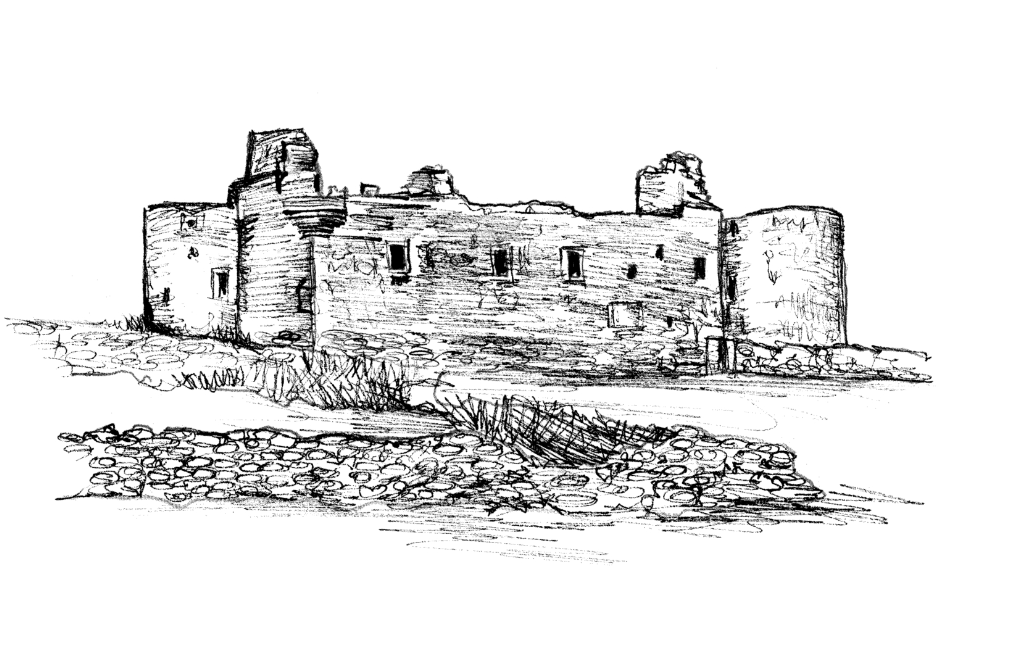 The most northerly castle in Scotland, Muness Castle is a ruined 16th-century Z-plan tower house. It consists of a main block of three storeys and formerly a garret, with round towers at diagonally opposite corners. Stair-turrets are corbelled-out above first-floor level. The walls are pierced by gunloops below many of the windows. The castle is dated 1598.
The entrance opens into a scale-and-platt stair to the upper floors and into a passageway to the vaulted basement. This passage leads to three cellars, one of which is the wine-cellar, with a small stair to the hall above, and another the kitchen, with a fireplace and oven. The hall is on the first floor of the main block, along with two other private chambers. Stairs in the turrets, as well as the scale-and-platt stair, led to the upper floor.
‘Mou nes’ is marked on Blaeu’s map of Shetland.
The castle was built by Laurence Bruce of Cultmalindie, a Scottish incomer to Shetland, who moved here after being involved in a murder. In 1573 he was appointed Chamberlain of the Lordship of Shetland, but his was a corrupt and repressive regime. Ill feeling developed between Bruce and Patrick Stewart, Earl of Orkney and Lord of Shetland, and the Earl landed a force to besiege the castle in 1608, but then withdrew. The castle was burnt in 1627, possibly by French pirates, although it was later restored. Andrew Bruce of Muness is on record in the 1660s. Muness was rented out in 1713 to the Dutch East India Company to store cargo salvaged from a wreck.
The castle was abandoned about 1750, and unroofed by 1774. The upper storey was partly dismantled for materials in the 19th century.