Ayrshire: About 1 mile north and east of Galston, on minor road east of A719, 0.5 miles north of the River Irvine, Loudoun Castle. 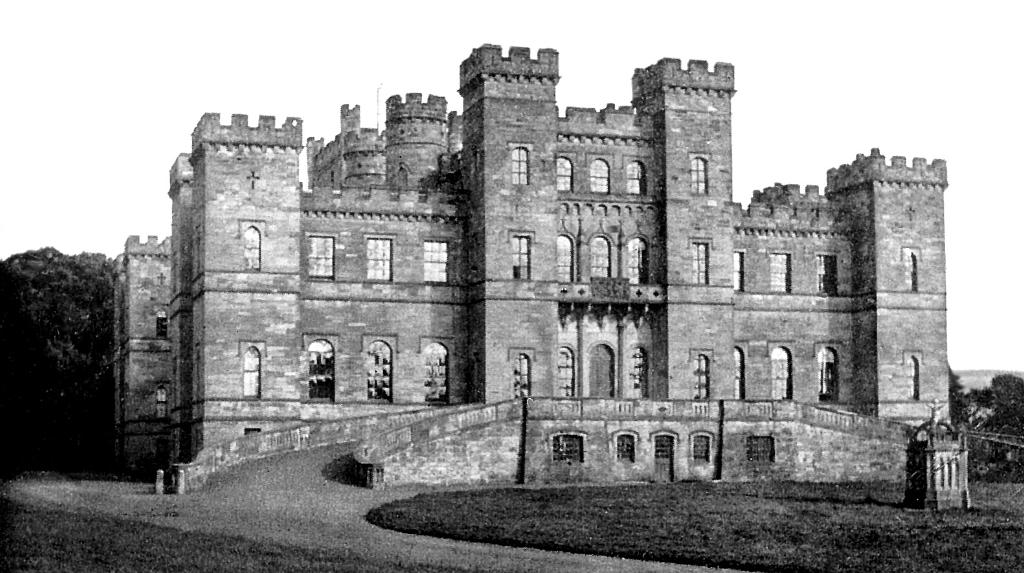 Loudoun Castle, a large ruined castellated mansion, incorporates a tower house. Part of the castle dates from the 15th century, but it was extended in the 17th century, then engulfed by a castellated mansion of 1804-11. The mansion is an impressive symmetrical edifice of two storeys with towers at the corners and a taller central three-storey tower in the middle. The building is crowned by a crenellated corbelled-out battlement.
‘Lowdoun Cast.’ is marked on Blaeu’s map of Cunningham, and is depicted as a castle with two large towers in a large wooded and enclosed park. 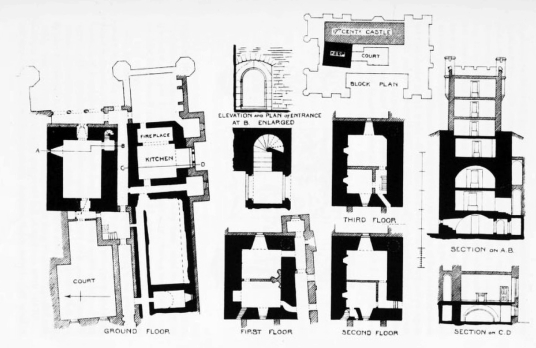 Loudoun was a property of the Crawfords in the 14th century, but passed by marriage to the Campbells in that century. Gilbert Kennedy, 2nd Earl of Cassillis,  was assassinated in 1527 by Sir Hugh Campbell of Loudoun, Sheriff of Ayr. John Campbell of Loudoun, Chancellor of Scotland, was made Earl of Loudoun in 1641. The castle was surrendered to General Monck for Cromwell in 1650 after a siege, during which part of the building was destroyed, but the Earl took part in an uprising in support of Charles II in 1653. Hugh, 3rd Earl, was joint Secretary of State for Scotland and Keeper of the Great Seal. 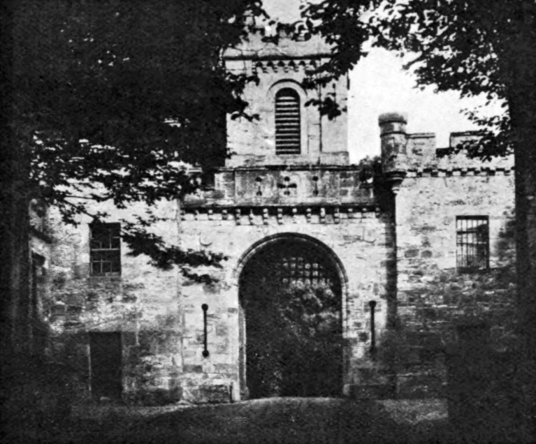 The property passed by marriage to Francis Hastings, Lord Hastings, in the 19th century, and he built much of the mansion, although he later ran out of money. The family were made Marquesses of Hastings, although this title is now extinct, while the Loudoun title continues with the now Abney-Hastings family. 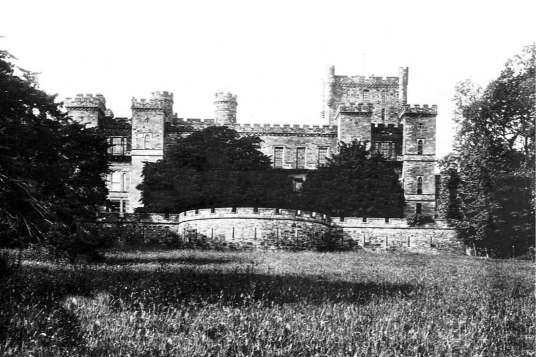 The castle was used by Belgian troops during World War II, and in 1941 was accidentally torched and gutted. It remains a large impressive ruin, and was the centre piece of a theme park, although this closed in 2010. There are plans to use the site for a holiday resort and hundreds of houses, although the ruin of the house is only to be stabilised. The initial plan, costing some £450m, to build 450 luxury lodges, along with a leisure complex, was rejected by the local council, and this was confirmed by the Scottish government reporter in February 2019.
The Campbells of Loudoun have a burial vault [NS 492374] of 1622, built from the remains of the choir of Loudoun Kirk. Among those buried there are John, 1st Earl of Loudoun, the 4th Earl, and Flora, 6th Countess, who died in 1840, along with the arm of Francis, her husband, so that they were hand-in-hand in death. There was village at Loudoun but this has been abandoned and only the ruins of the church and some cottages survive. 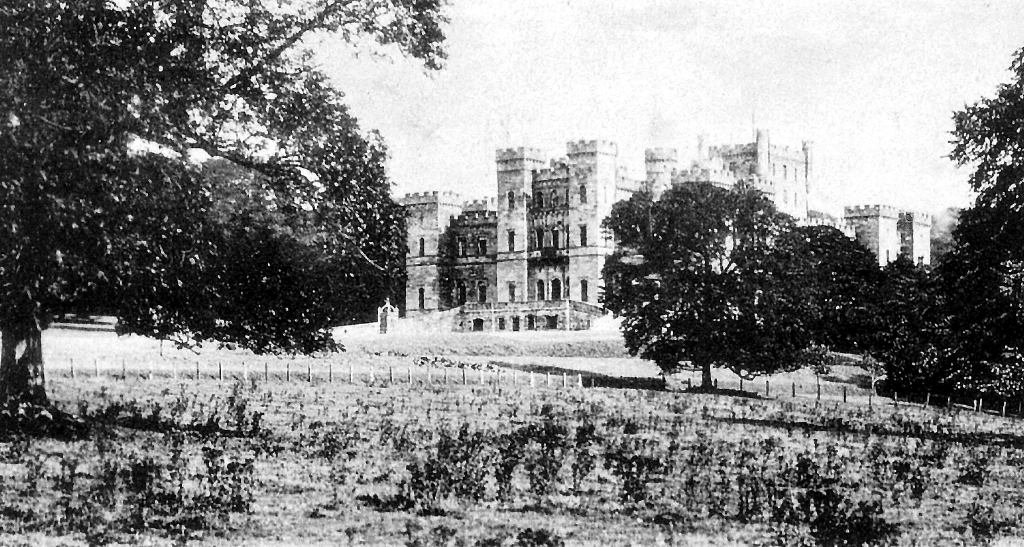 The castle was reputedly haunted by a ‘Grey Lady’, who was apparently seen often before its destruction in 1941, and is said to have been witnessed since. The ghost of a hunting dog, with glowing eyes, is also said to roam the area. There are also tales of a ghostly piper and of a monk.
The castle is said to be linked by an underground passage to Cessnock Castle.

From, In Ayrshire; a descriptive picture of the County of Ayr, with relative notes on interesting local subjects, chiefly derived during a recent personal tour by William Scott Douglas, 1874:

The chief attraction to visitors in this neighbourhood is Loudoun  Castle, with its "bonie woods and braes," renowned in song, and  hallowed with interesting associations in relation to its noble occupants and historical events during centuries past. At present it is a magnificent structure, in the modern castellated style, situated  half-a-mile north from the high road in the Galston neighbourhood.  The original Castle named The Old Place, of which there is still a  fragment with a portion of the moat is about one fourth of a mile  north-east of the present mansion. It was burned down during the  fifteenth century, in a fray with the Kennedies, who are said to have  possessed an old tower at Achruglen, on the Galston side of the  valley, still existing as a ruin. The greater and more stately part  of the present Loudoun Castle was completed in 1811. The great  tower or keep is of unknown antiquity, the walls being nine feet thick, and its two lower stories arched against fire. This was besieged by Cromwell's soldiers, and gallantly defended for some time by Lady Loudoun, who at length capitulated on honourable terms. Very extensive additions were made to the Castle by Lord Chancellor Loudoun prior to his death in 1652.

The library contains upwards of 8,000 volumes, and the family pictures are of great interest. A picture of Charles I, which was in the gallery when the castle was besieged by Cromwell's soldiers is still shown as it was mutilated by them, the monarch's nose having been cut out. Here also is a "sword of Wallace," and a celebrated  yew tree, said to be the oldest in Scotland, grows close to the Castle  walls. One of the family charters was signed beneath its foliage in the time of William the Lion.

This noble demesne is a principal seat of the Marchioness of  Hastings, and Countess of Loudoun in her own right. At the beginning of the present century, and backward through a period of 500 years, it belonged to the Campbells of Loudoun. The barony, in the days of David I, was owned by one Lambrinus, father of James de Loudoun, whose charters date from the time of William I (A.D. 1200). This James left an only daughter, Margaret, who married Sir Reginald Craufurd [Crawford], hereditary Sheriff of Ayrshire. Their great-  granddaughter (only child of Hugh Crawford) was mother of Sir  William Wallace, hero of Scotland. Susannah Crawfurd, a cousin of the mother of Wallace, and daughter of Sir Reginald, who died in 1303, married Sir Duncan Campbell of Lochaw, Sheriff of Ayrshire, and thus became the first of the Campbells of Loudoun. At the time of the Reformation, Sir Matthew Campbell of Loudoun supported the movement, but eventually sided with Queen Mary, and was taken prisoner at Langside. His grand-daughter Margaret, Baroness of Loudoun, succeeded in 1622, and married Sir John  Campbell of Lawers, who was created Earl of Loudouu in 1633. He was a member of the famous General Assembly of the Kirk in 1638, was made Lord Chancellor in 1642, and died in 1652. His son James, Lord Mauchline, the second Earl, died abroad in 1684, where he had been forced to reside during the persecution of the Presbyterians at home. Hugh, the third Earl, was one of the Commissioners who signed the Treaty of Union in 1705. He served under  Argyle [Argyll] at Sheriffmuir, and died in 1731. His widow, a daughter of John, first Earl of Stair, died at Sorn Castle so lately as 1779, nearly 100 years old. John, the fourth Earl, served under Sir John Cope at Prestonpans, was Commander-in-Chief in America in 1756, and died at Loudoun in 1782. Leaving no issue, his title devolved  upon his cousin, James Mure-Campbell, of Rowallan, who had  married Miss Flora M'Leod [MacLeod] of Raasay in 1779.

This brings us down to a very interesting period in the history of the Loudoun family. The lady just named (the eldest of a family of ten daughters and three sons, most respectfully noticed by Dr  Johnson in his Tour to the Hebrides) died at Edinburgh on "3rd Sept, 1780, a few hours after giving birth to her only child, Flora, who became Countess of Loudoun." The widower obtained the rank of Major-General in 1781, and became Earl of Loudoun in 1782. He took up his residence at Loudoun Castle, where the infant heir was reared under the care of her aunts, the Misses M'Leod of Raasay. The readers of Burns' biography will recollect  that, in 1784, he and his brother Gilbert entered on a lease of the farm of Mossgiel, which formed part of the Loudoun estates. In the fine poem ‘The Vision’, he represents himself as sitting lonely, at the close of a winter's day, "by the ingle-cheek, ben i' spence," when the local Genius of Poesy presented herself to his  imagination, and thus addressed him,

This district here as mine I claim,

Where once the Campbells, chiefs of fame,

In 1786, the date of that composition, James, fifth Earl, and last of the Campbells of Loudoun (to quote the words of the poet), 'shot himself out of sheer heart-break at some mortifications he suffered, owing to the deranged state of his finances‘. The interesting infant, Flora Mure-Campbell, was removed to Edinburgh, where, in the year following, we find Burns on terms of intimacy with her aunt, Miss Isabella M'Leod of Raasay, and others of her family. (See his poem "Sad thy tale, thou idle page," and also a song, "Raving winds around her blowing.") Loudoun Castle was let out to  strangers, and in 1788-89 was tenanted by Mrs. Henri, a daughter of Mrs. Dunlop of Dunlop, a distinguished correspondent of the poet. Burns received from thence a well-known poetical epistle, addressed to him by Janet Little, milkmaid of the tenant. To close our notes regarding the Loudoun family, it remains to be said that the orphan Countess married, on 12th July, 1804, the gallant Earl of Moira, who was created Marquis of Hastings in 1816 and died in 1826, leaving six children, the eldest of whom was the beautiful, the gifted, but unfortunate Lady Flora Hastings. His  eldest son, born in 1808, succeeded to the title and estates in 1826, and married the Baroness Grey de Ruthyn in 1831. Lady Flora  Hastings, just referred to, was in 1834 appointed one of the Ladies of the Bed-chamber to our present Queen's mother, the Duchess of Kent, and died at the age of 33, in Buckingham Palace, on 5th July, 1839, the victim of some unfounded Court-scandal, for she died of a broken heart; and her mother, the Countess-dowager, oppressed with grief through this cause, survived her only twelve months.

A posthumous volume of elegant sentimental poetry by Lady Flora was given to the world, and her own hapless story formed the subject of many exquisite effusions of sympathising genius at the period. Among these, a meritorious effort, produced in a local periodical, issued in 1839 by the publisher of the present work, thus concludes:

"What though of calumny she bore the frown!

It sped her progress to the courts of bliss;

And for a cross she hath received a crown,

And nobly conquered conquered, yea, in this."

The family burial crypt is at Loudoun Kirk, a hamlet containing the remains of an ancient chapel, with old kirkyard, about a mile west of the Castle, within sound of the murmuring flow of Irvine Water. This chapel was erected in 1451, by the widow of one of the barons of Loudoun. The secluded spot, skirted by an old moss-grown wall, overshadowed by mournful trees, is a favourite resort of the working population of Galston. Among the mouldering memorials of departed life may there be seen a grave-stone marking the resting place of one of the Drumclog Covenanters. It bears this inscription:

'Here lies Thomas Fleming, of Loudoun Hill, who, for his  appearing in arms in his own defence, and in defence of the Gospel, according to the obligation of our National Covenant, and agreeably to the Word of God, was shot in an encounter at Drumclog, June 1, 1679, by bloody Graham of Claverhouse."

Among others of the Loudoun family buried in the vault of  Loudoun Kirk was the Lord Chancellor, who died in 1652. Beneath the glazed coffin lid his face might be seen, not many years ago, in perfect preservation. Here also repose the lamented Lady Flora Hastings and her much-respected mother. In a nook of the common  burial ground lies the "Scottish milkmaid," Janet Little, above  noticed. She died 15th March, 1813, aged 54.