In a lovely location up through the sylvan Dollar Glen, the dramatically situated Castle Campbell is a handsome ruinous old stronghold of the great Campbell clan of Argyll, with many rooms to explore, colourful terraced gardens, and with superb views over Dollar and to the Forth. 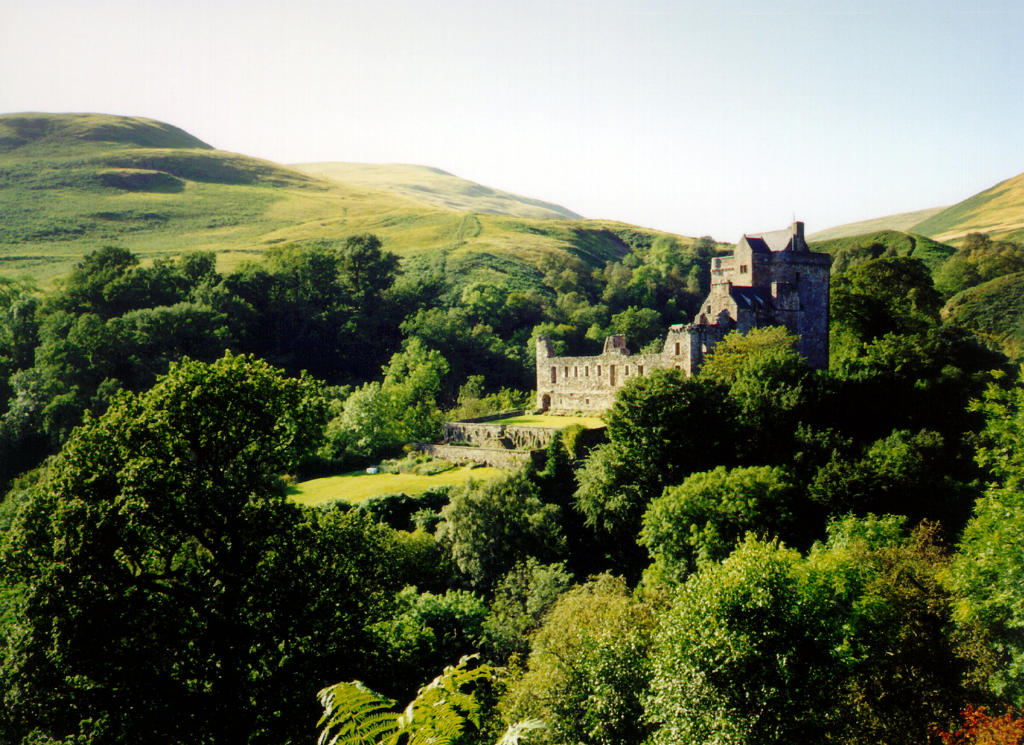 Stirling & Clackmannanshire: About 0.5 miles north of Dollar, on minor road north of the A91, in Dollar Glen, just west of Gloom Hill, east of Burn of Sorrow, at Castle Campbell.

Access to the castle is through the beautiful sylvan Dollar Glen and involves a vigorous walk, steep in places: sensible footwear recommended. 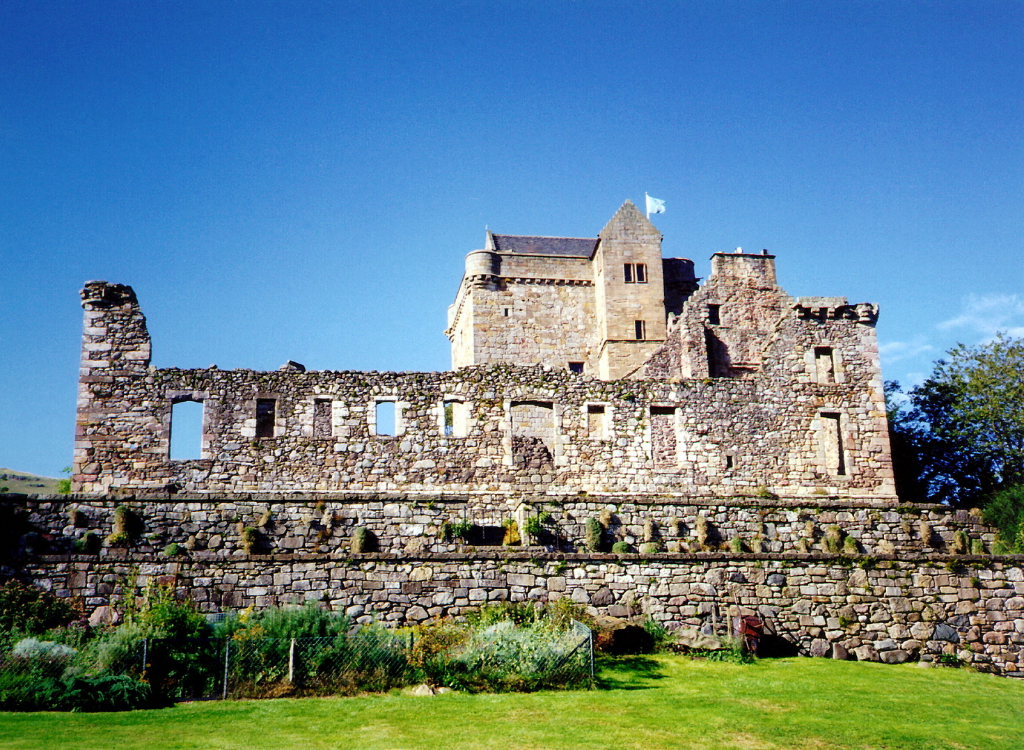 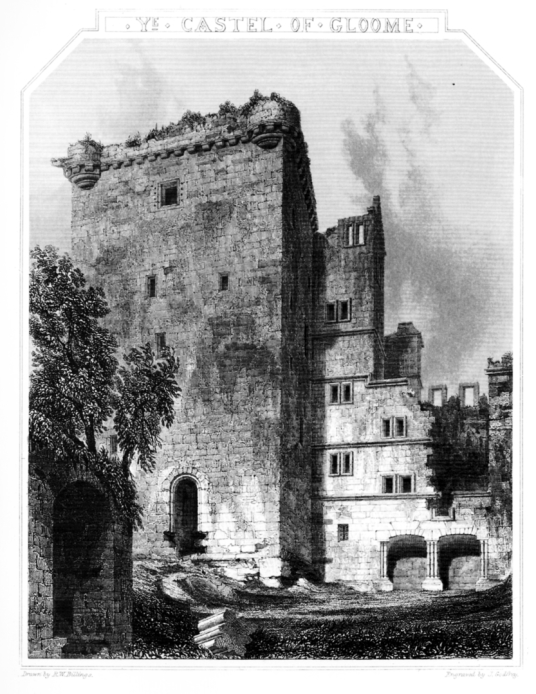 An impressive and picturesque building in a beautiful position, Castle Campbell was built where the Burns of Care and Sorrow join, overlooked by Gloom Hill, and was originally known as Castle Gloom or Castle Glume. The old stronghold is reached either by a winding road or up through the sylvan Dollar Glen by the side of the burn with a scenic waterfall. 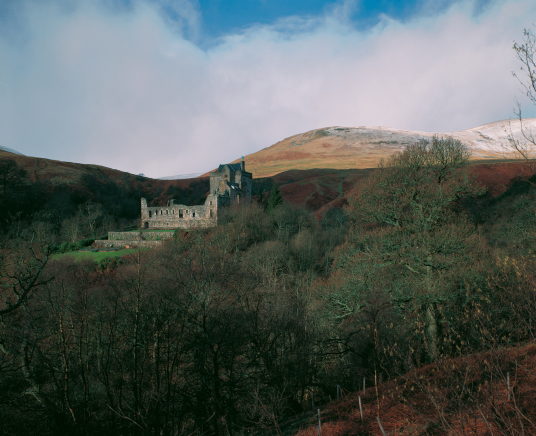 Castle Campbell (© and many thanks to Tom Wolf, www.tom-wolf.com) 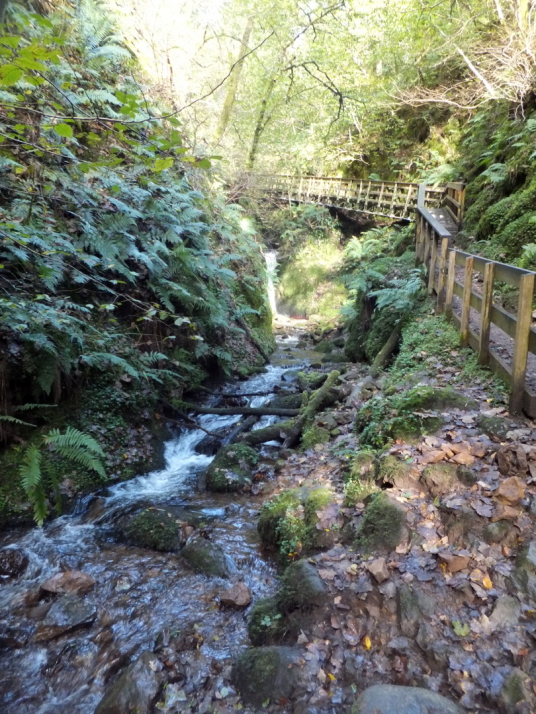 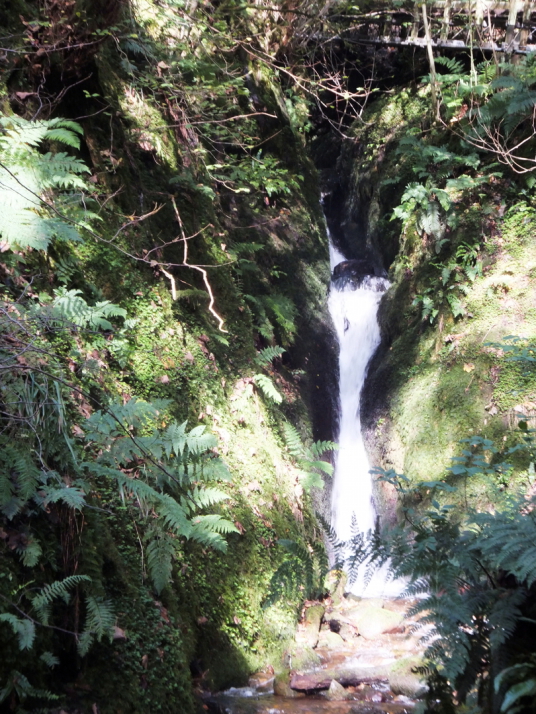 A large strong 15th-century tower, altered in later centuries, stands at one corner of a substantial courtyard, enclosed by a curtain wall. Much of the courtyard is ruinous.

The courtyard is entered by an arched pend, originally through a gatehouse. The main tower rises four storeys to a parapet with open rounds at each corner. The roof is flat, the upper floor being rib-vaulted to support it. The curtain wall has a corbelled-out parapet with machicolations. 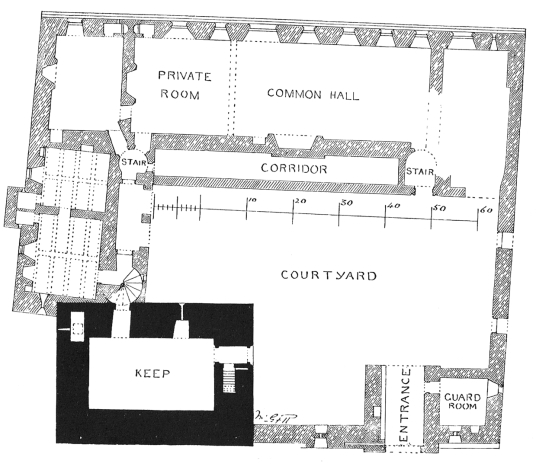 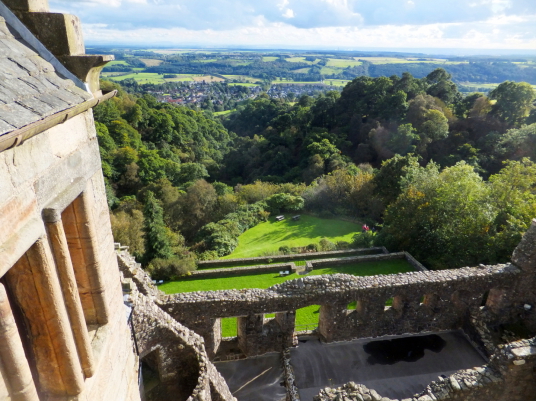 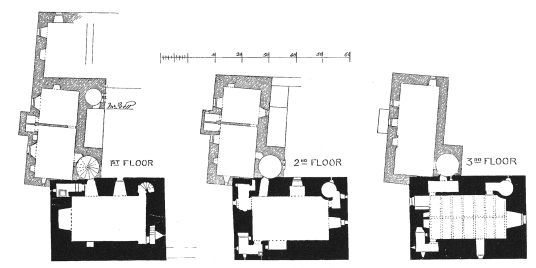 There are great views from the top of the tower. 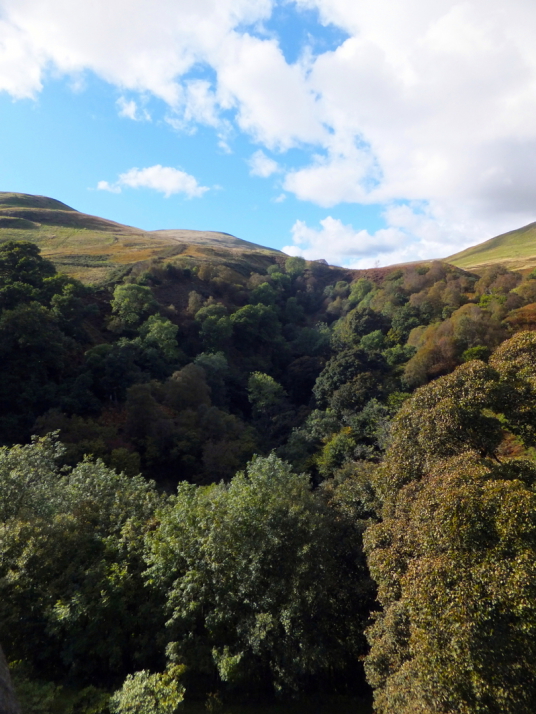 One entrance to the tower was at ground level, and led to a vaulted basement and to a straight stair, in the thickness of the wall, which rose to the first floor. The other entrance, at first-floor level, was reached by an external stair. The hall, on the first floor, is vaulted, and has a prison in the thickness of one wall, reached through a hatch in the stone floor. 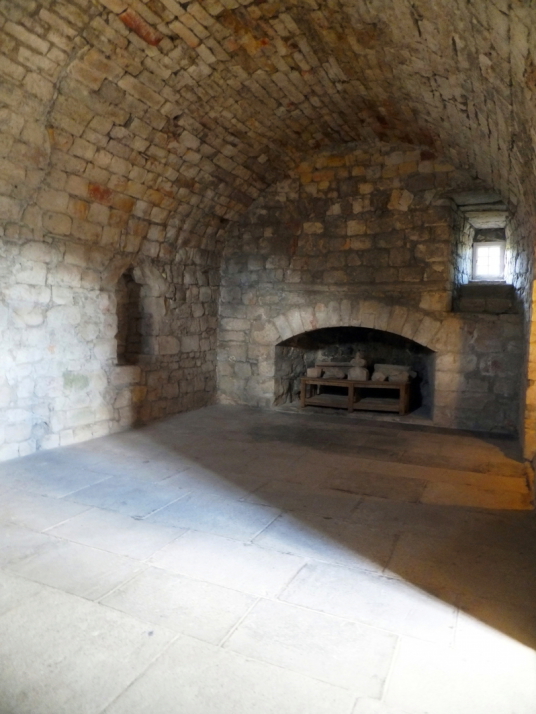 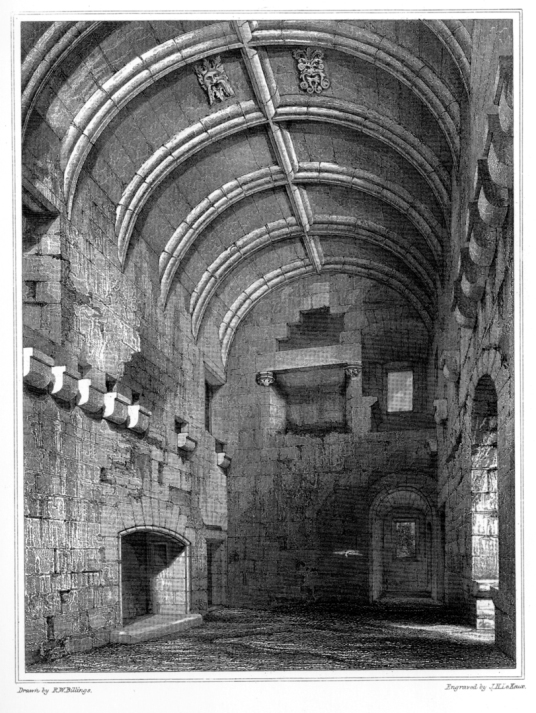 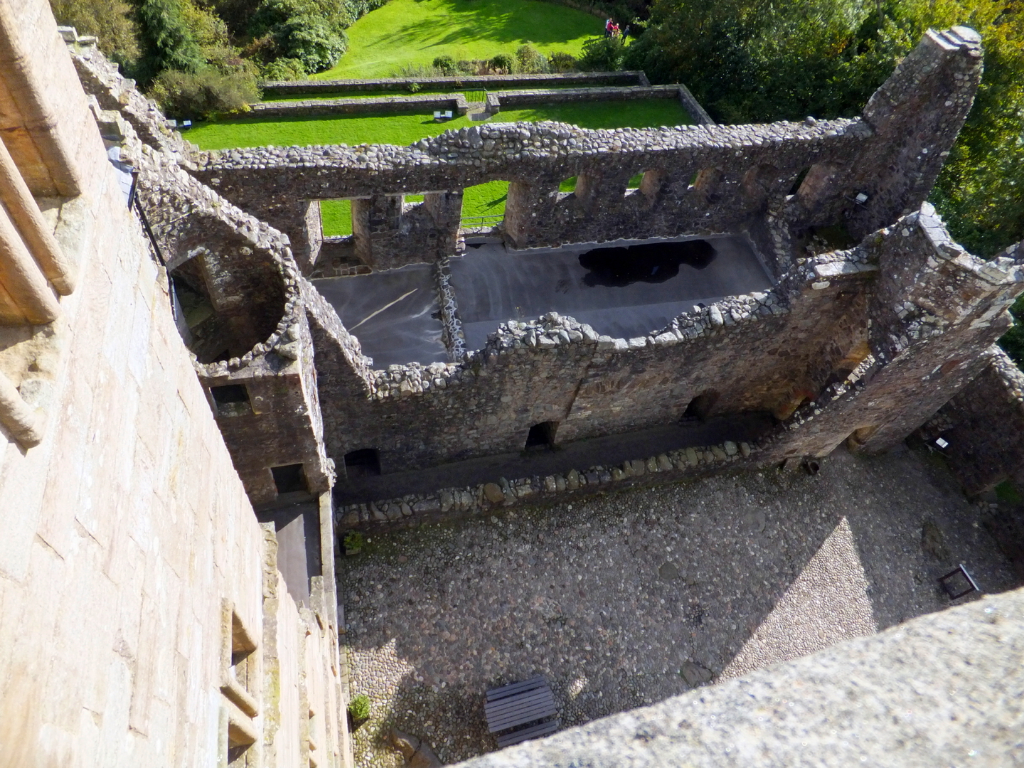 Castle Campbell: courtyard from the battlements of the tower (© Martin Coventry)

A later range also contains a hall with large windows looking out over Dollar Glen and Clackmannanshire to the River Forth. An arched loggia joins the lower storeys together, and there is a terraced garden beneath the courtyard, again with lovely views and facing south. 'John Knox's Pulpit' is from where the firebrand religious reformer is said to have preached. 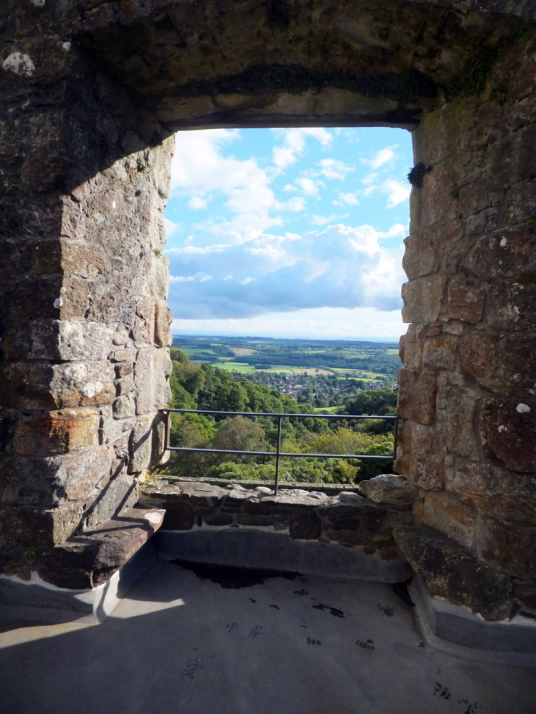 Castle Campbell: view from window in the hall of the courtyard range (© Martin Coventry)

This was a property of the Stewarts of Innermeath and Lorne, and was burned in 1466. The property passed by marriage to Colin Campbell, 1st Earl of Argyll and Chancellor of Scotland, and he had the name changed to Castle Campbell by an act of parliament in 1489 (also see Inveraray Castle). 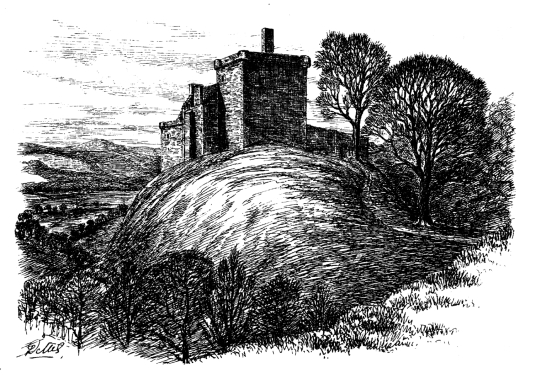 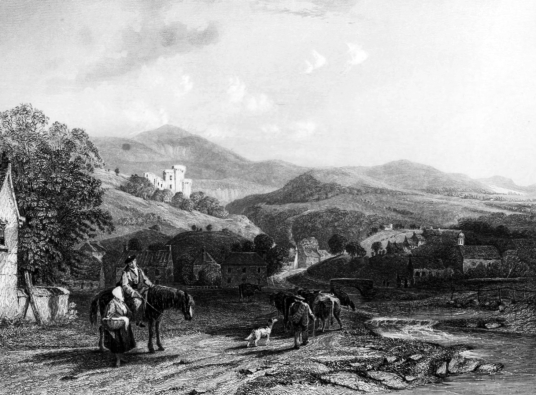 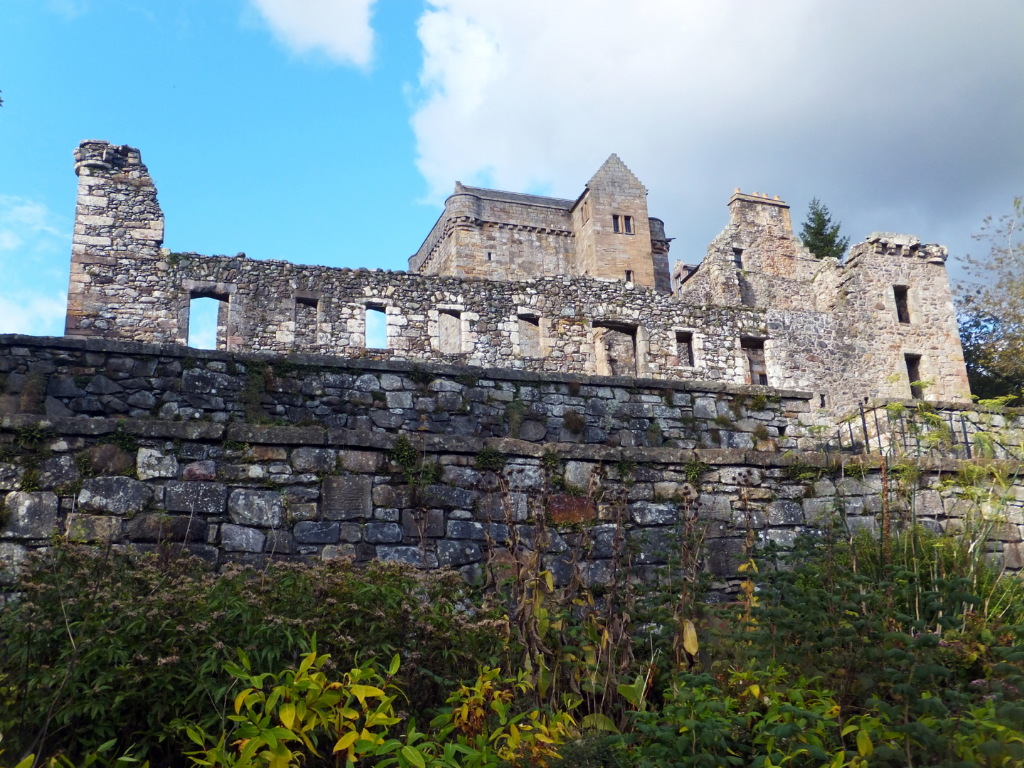 The Marquis of Montrose defeated the 8th Earl and 1st Marquis of Argyll, another Archibald, at the battles of Inverlochy and Kilsyth in 1645, but failed to capture the castle, although he ravaged the lands around. The 8th Earl was responsible for hanging, drawing and quartering Montrose in 1651 – Argyll himself was later executed in 1661 after the Restoration. It was around this time that the Campbells of Argyll made their main lowland seat Argyll's Lodging in Stirling. 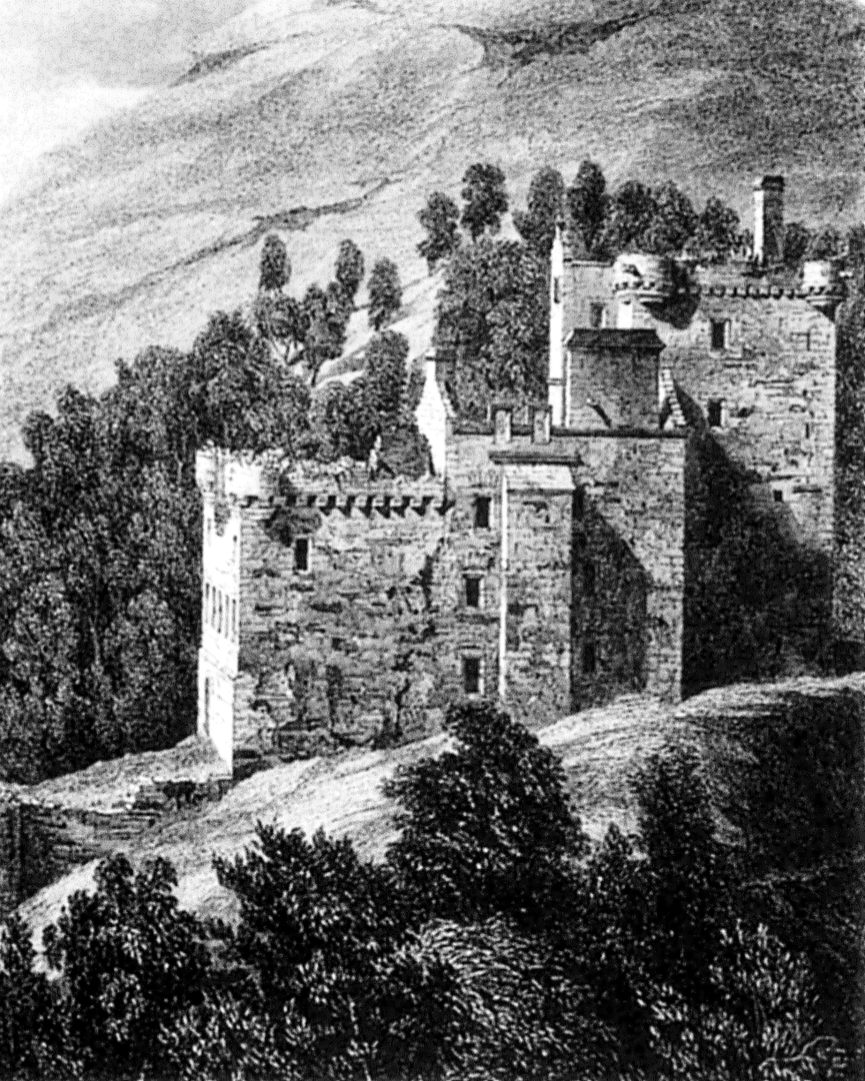 Cromwell’s forces occupied the castle in 1653, and only part was restored after a burning by General Monck in 1654. The Ogilvies are also said to have torched the castle in revenge for the burning of Airlie Castle. The 9th Earl, yet another Archibald, was condemned to death for treason, escaped to start a rebellion, but was captured and executed in 1685. 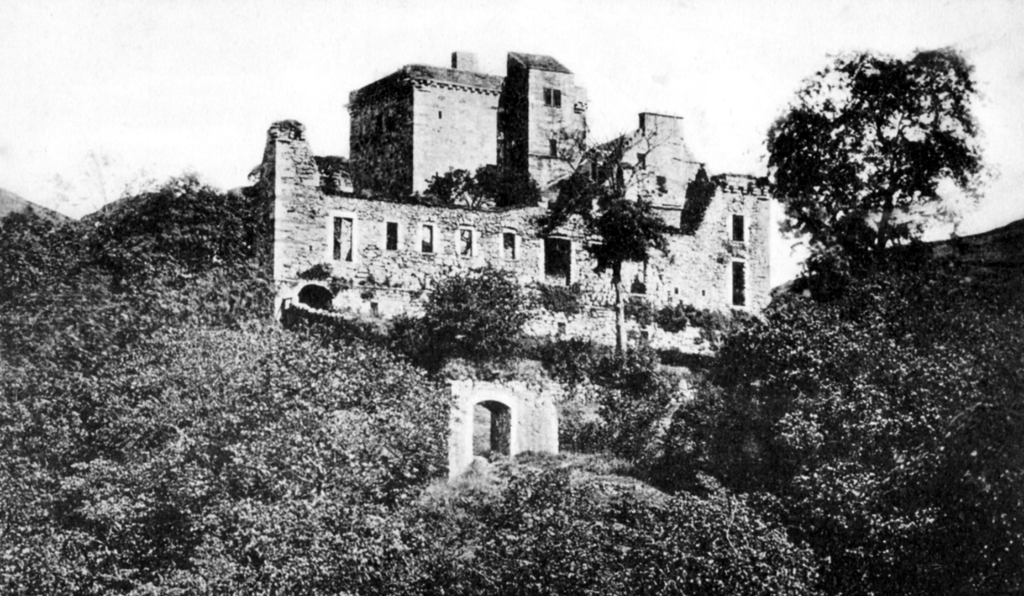 George, the 6th Duke, sold the castle in the early 19th century to the Taits, who sold it to the Orr family in 1859. In 1948 the castle was taken over by The National Trust for Scotland, but is administered by HES. 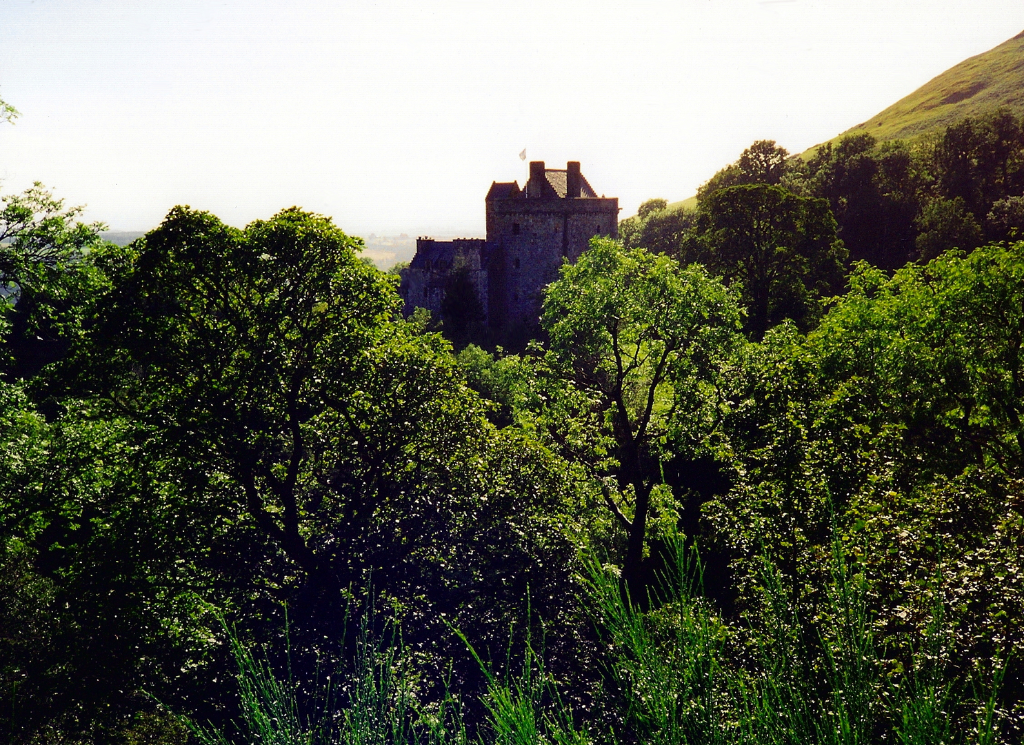 There are fine walks up to the castle through Dollar Glen, which is a Site of Special Scientific Interest because of the range of habitats and geology. Paths may be slippy when wet and the path or walkway is steep in places. The glen is open all year and in the care of the NTS. 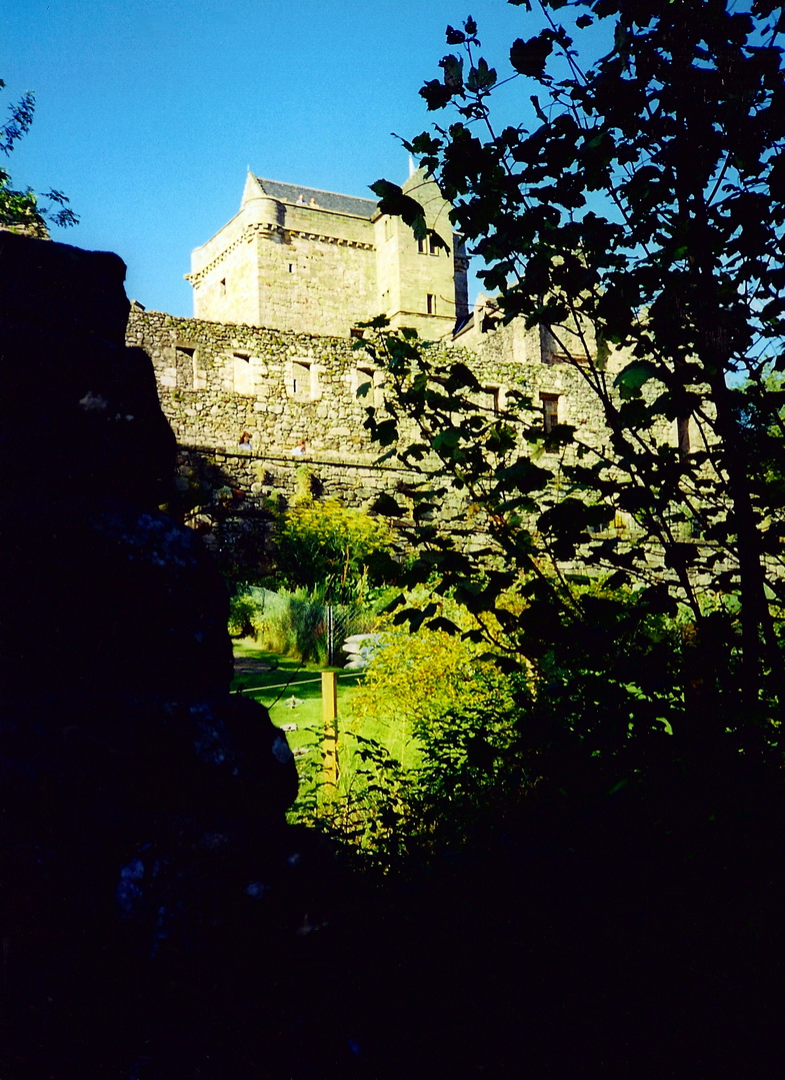 An impressive old sycamore tree stands by the entrance to the castle courtyard and is known as the Maiden Tree, from a tradition that a princess was imprisoned in the castle after falling in love with a lowborn man.