Orkney: On north-east side of island of Westray in Orkney, on minor roads west of B9066, 0.5 miles west of Pierowall, at Noltland. 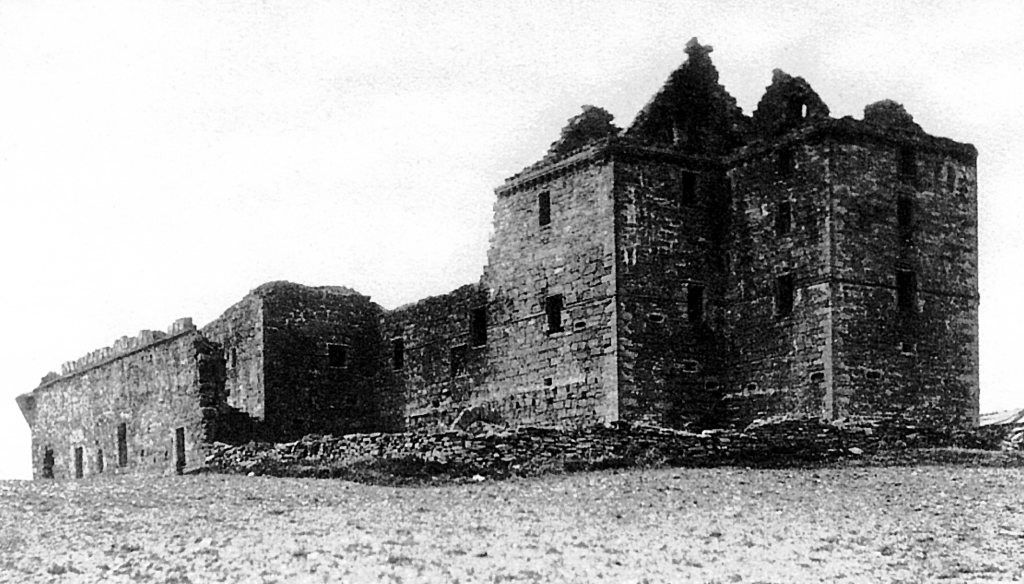 A strong and grim stronghold, Noltland Castle is a large ruined 16th-century Z-plan tower house. It consists of a main block of four storeys and an attic with square towers, one of five storeys and a garret high, at opposite corners. The thick walls are pierced by many gunloops, some 71 in total. Remains of a corbelled-out parapet, with open rounds, survive around the taller tower and part of the main block. A later courtyard survives with the remains of an L-plan range of buildings. 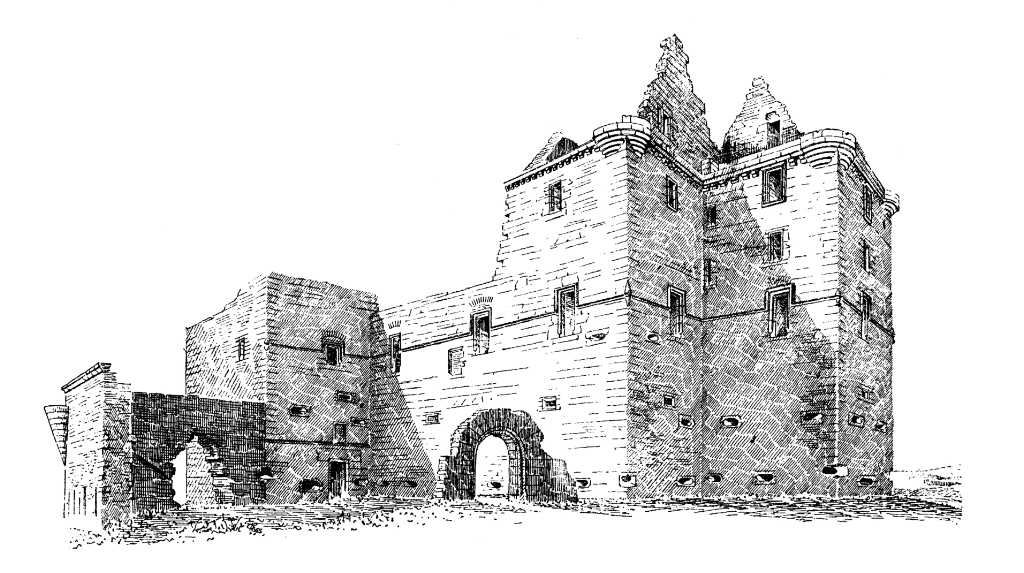 The entrance is in the re-entrant angle with one of the square towers. It leads to a wide turnpike stair and into the vaulted basement of the main block, which contains a kitchen with a large fireplace and oven, and cellars, one with a small stair to the hall above. The hall, on the first-floor of the main block, had a fireplace and very small windows, and had a stone roof. There was an adjoining private chamber, another in the square tower, as well as more rooms on the floors above. The castle may never have been completed. 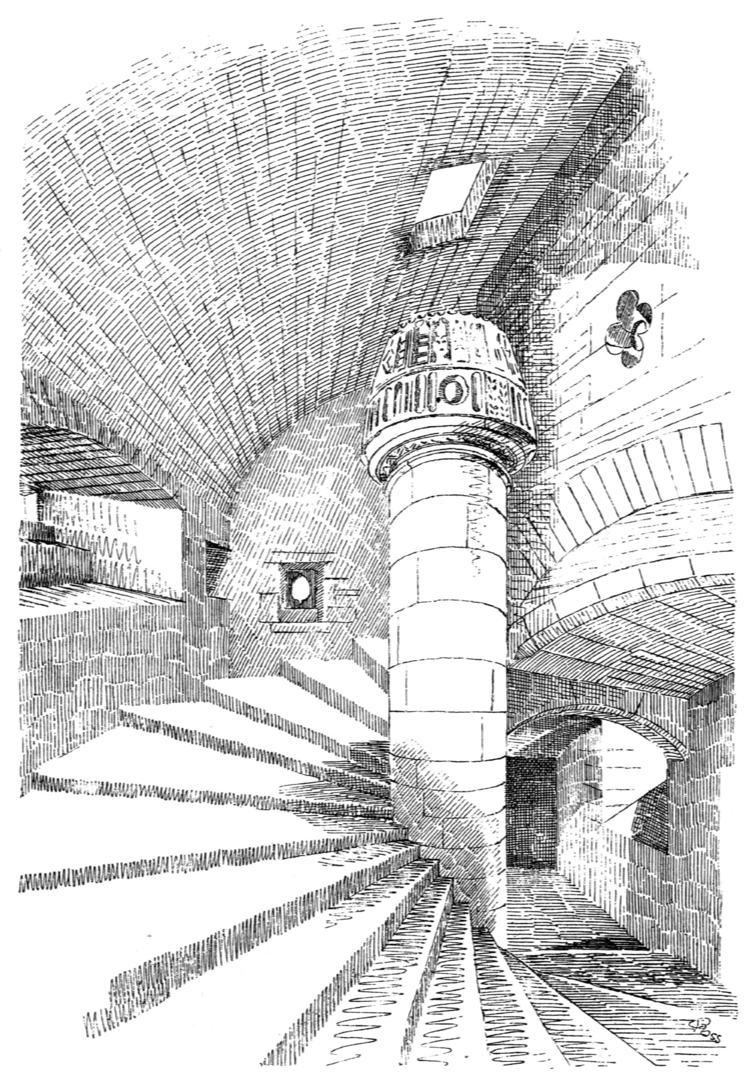 The castle is marked as ‘Westra’ on Blaeu’s map of Orkney.
An earlier castle here was built by Thomas Tulloch, Bishop of Orkney, in 1420, and he was bishop until 1461. He was succeeded by William Tulloch, who held the post until 1477. Thomas was buried in St Magnus Cathedral [HY 449112] in Kirkwall, but his tomb was destroyed by Cromwell’s forces in the 1650s. Towards the end of the 15th century, Noltland was besieged by the Sinclairs of Warsetter. 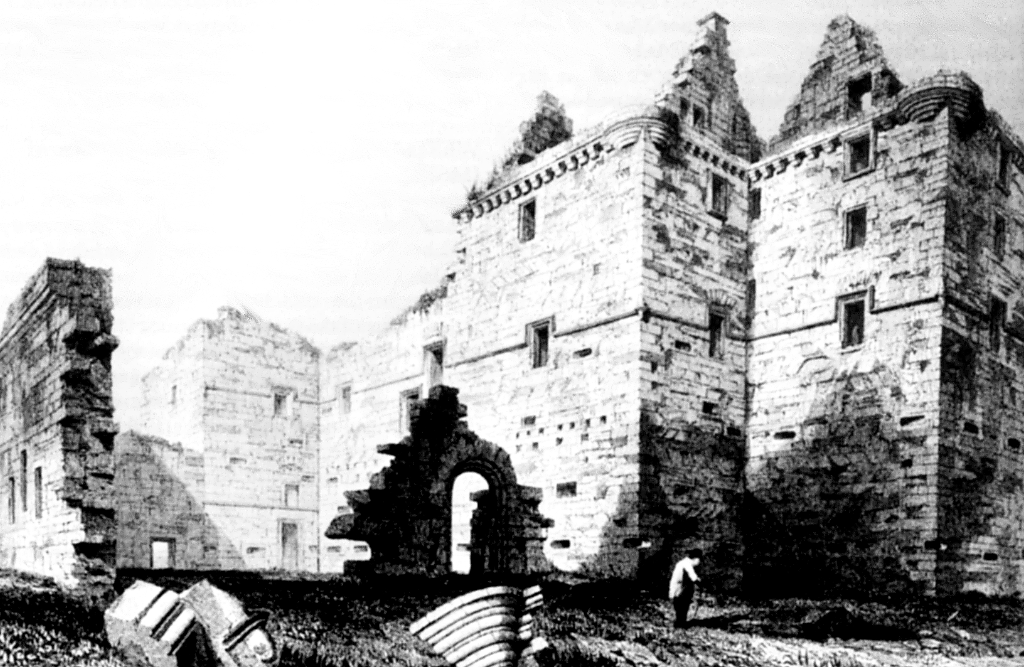 The present castle was built by Gilbert Balfour, who was Master of the Household to Mary, Queen of Scots. He acquired the property by marrying Margaret Bothwell, whose brother was Bishop of Orkney and granted the lands to Balfour. Balfour had been involved in the murders of Cardinal David Beaton in 1546, for which he was imprisoned, and then Henry Stewart, Lord Darnley, in 1567. Balfour was also Sheriff of Orkney and the keeper of Kirkwall Castle. He supported Mary after she fled to England, but when her cause became hopeless he fled Scotland, and served in the Swedish army until his death, being executed for treason against the Swedish king in 1576.
The castle was besieged and captured in 1592 by Patrick Stewart, Earl of Orkney, in order to get payment of a debt, during which ‘attacking and invading it with iron, fire and war engines day and night’ according to an act of 1607. The property was sold to Sir John Arnot in 1606, who was Provost of Edinburgh and then Sheriff of Orkney. Some of the Marquis of Montrose’s men took refuge here after their defeat in 1650, and the castle was later held by Cromwell’s troops and wa sburned out. Noltland was damaged by fire in 1746, and abandoned about 1760. It passed into the care of the State in 1911.
A death in the Balfour family was reputedly heralded by a ghostly howling dog, the ‘Boky Hound’. A story behind the legend is that the dog was slain by a Sir David Balfour in the 13th century. Balfour had flown into an uncontrollable rage after the faitthful pooch had knocked a drink from his hand. The faithful hound had actually saved his master from being poisoned. Births and marriages were announced by an eerie spectral light. The castle is also said to have had a brownie, an old man who helped folk at need, beaching boats or clearing roads, and is said to have been well liked by the Balfour family. The brownie left when the castle was abandoned.