Perthshire: About 1.5 miles north-west of Spittal of Glenshee, on minor road west of A93, south of Glenlochsie Burn, near 6th tee of golf course, at Dalmunzie. 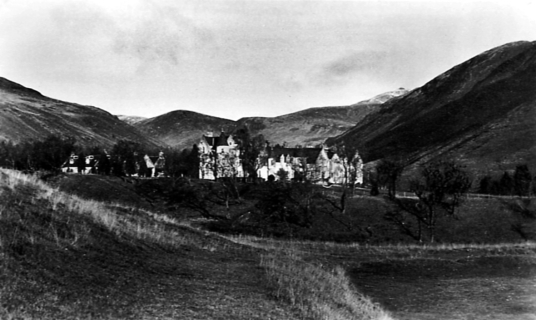 Some remains survive of a castle or laird’s house. This was replaced by a large, rambling castellated and turreted mansion of two and three storeys, now the Dalmunzie Hotel [NO 091712]. The old castle was apparently ruinous in the 17th century. The estate runs to some 6,500 acres.
The lands were held by the Fergussons of Dunfallandy, and then by the MacRitchies, and Robert MacRitichie and his son were outlawed in 1584 and 1589. The family was also recorded as Mackintosh, and Robert Mackintosh, 3rd of Dalmunzie, fought on the side of the Marquis of Montrose in 1645, and many of the clan fought for the Jacobites in the 1715 Rising, then at the Battle of Culloden in 1746.
There was a hunting lodge, built by Dr Charles Hill Mackintosh of Dalmunzie in 1874. This was later rebuilt, the Mackintoshes held the property until 1916 when the last laird died childless. The estate was sold to Sir Archibald Birkmyre in 1920 and he extended the house, laid out the golf course and even built a railway to join up his property. Dalmunzie was the base of the mountain artillery regiment during World War II, and the estate was sold in 1946, and since then has been used as a country house hotel.