Kincardine & Deeside: About 5.5 miles north-east of Laurencekirk, on minor roads south of B967 at village of Arbuthnott, just north of Bervie Water, at Arbuthnott.

OPEN: Gardens May-June, daily 9.00-17.00 or by prior arrangement throughout the year. House open certain days and by arrangement (check website). Holiday cottages.

St Ternan’s Church is open to the public 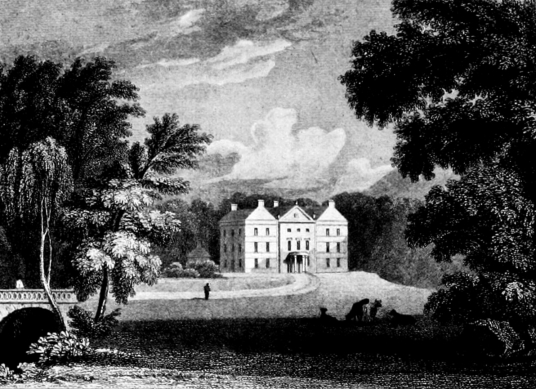 On a strong site between two rivers, Arbuthnott House is a large and an impressive symmetrical mansion of three storeys with classical detail but incorporating old work. There was originally a 13th- or 14th-century castle here, but the present building dates from the 15th century, and a further range was added in the 17th century. There are some fine plaster ceilings of about 1685, and in the 1750s the gateway side of the courtyard was replaced and the house remodelled.

There are fine gardens of about five acres, with a terraced garden and a walled garden with Arts and Crafts planting.
Arbuthnott was held by the Oliphants, but passed by marriage to the Arbuthnotts (originally de Swinton) in the 12th century and they built the castle. Hugh Arbuthnott was implicated in 1420 for the murder of John Melville of Glenbervie – by throwing him in a cauldron of boiling water, then drinking the resultant broth. In 1641 Sir Robert Arbuthnott was made Viscount Arbuthnott, and the family still live at the house:

In a peaceful and pleasant spot is St Ternan’s Church[NO 801746] at Arbuthnott. dating from the 13th century, with the two-storey Arbuthnott Aisle, added by Robert Arbuthnott around 1500. The Arbuthnott Missal, Psalter and Prayer Book were transcribed and illuminated in the chamber above the Arbuthnott Aisle between 1497-1500, and now in Paisley Museum.

There is a medieval stone effigy in the church, and in the burial ground the memorial to Lewis Grassic Gibbon (James Leslie Mitchell), author of Sunset Song, part of A Scots Quair, just voted Scotland’s favourite book, along with other interesting memorials. The Grassic Gibbon centre is close by.