Lothians: About 3 miles west and south of South Queensferry, just west of B8020 between B9080 and A904, short distance north of M9. 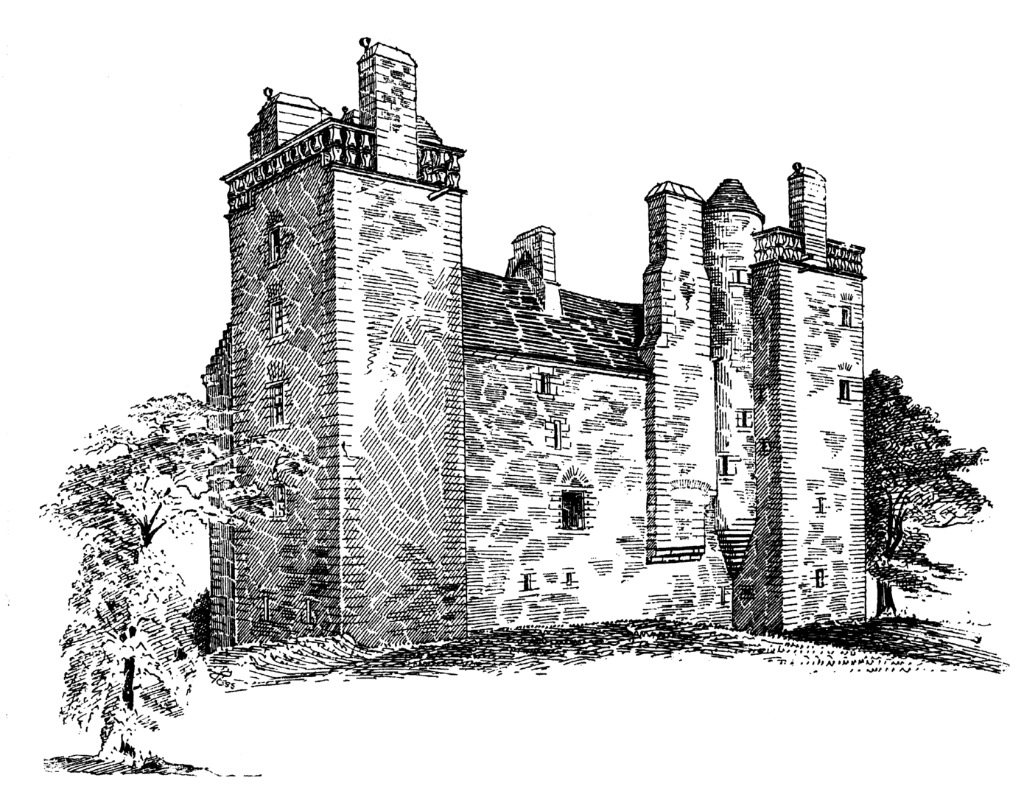 Duntarvie Castle is a large ruined 16th-century tower house, although it may include older work as there was a stronghold here from 1212 or earlier. The present building consists of a rectangular main block of four storeys, with square towers, rising a storey higher, projecting at each end. Tall corbelled-out stair-turrets, in the re-entrant angles, are crowned by stone-roofed caphouses.
The basement is vaulted, and contained the kitchen with a wide fireplace and cellars, one with a small stair to the hall above. A straight stair led to the first floor, the upper floors being reached by the turret stairs. The hall was on the first floor, with adjoining chambers, and a small stair in one corner led up to a room above. The upper floors were occupied by many chambers in the main block and towers.
‘Duntaruy’ is marked on Blaeu’s map of The Lothians, then ‘Duntarvie’ on Adair’s map of West Lothian.
Duntarvie was held by the Lindsays, but was a possession of the Durham family in 1588, and Francis Durham of Duntarvie is on record in the 1640s. The property went to the Hamiltons of Abercorn in 1605, and then to the Hopes of Hopetoun. The building was abandoned about 1840.
The tower was being restored, although, during preliminary work, part of one tower collapsed in a gale, and it was later put up for sale. The building is now being restored and is home to a kiltmaker and Highland dress outfitter.
One story is that the castle is haunted by the ghost of the Marchioness of Abercorn, and the apparition has reportedly been seen on the battlements, while disembodied voices are said to have been heard during the night. The identity of the Marchioness of Abercorn may be Marion Boyd, who was Countess of Abercorn and was imprisoned because of her Catholic faith. She died in 1632, but not at Duntarvie.