Craignethan Castle is a substantial artillery castle built the influential Hamilton family, now ruinous but with an impressive tower, fortifications and a ditch with a unique caponier, standing in a pleasant wooded location, near Lanark in central Scotland. 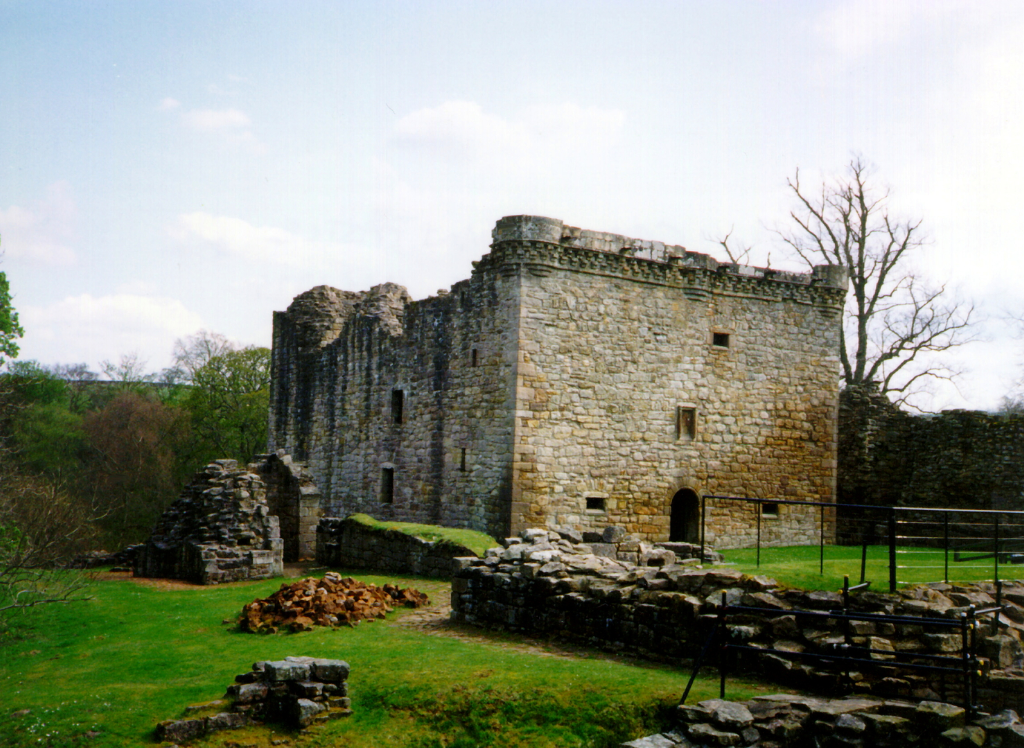 Lanarkshire & Glasgow area: About 4.5 miles west and north of Lanark, on minor roads south of A72 at Crossford, on the north side of the River Neithan, just north of Tillietudlem, at Craignethan Castle. 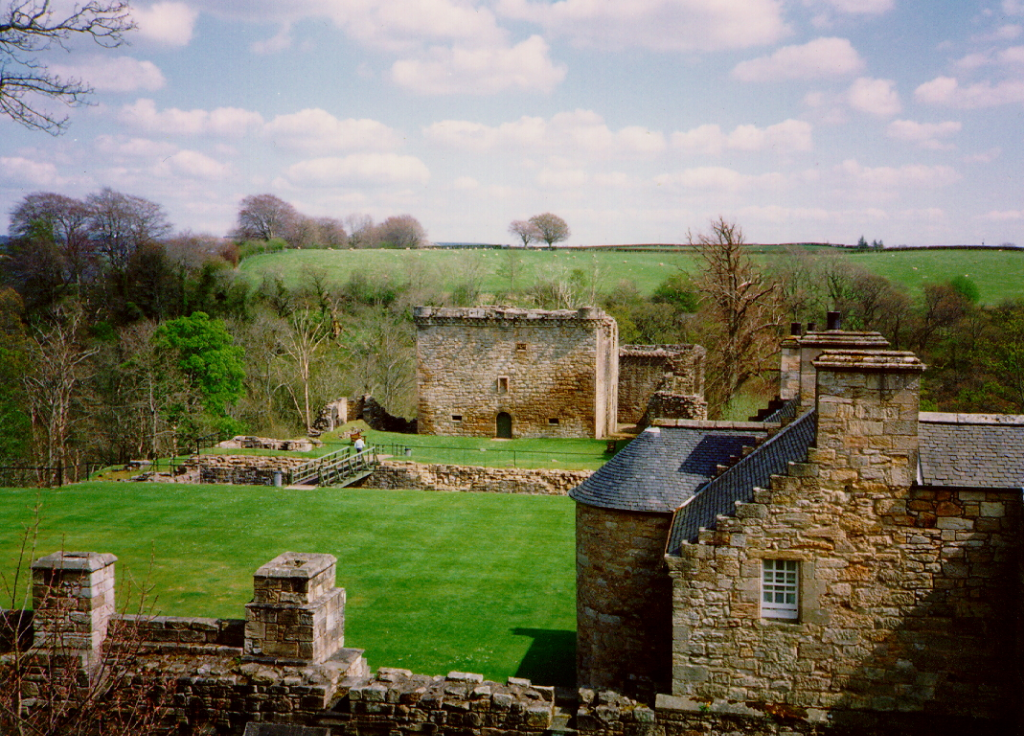 Standing on a promontory above a deep ravine of the River Nethan in a pretty location surrounded by ancient woodlands, Craignethan is an early castle built to withstand artillery. A strong tower was surrounded by a curtain wall on three sides, with a massively thick rampart protecting the landward side. There was also an outer courtyard.
The ruined but well-preserved main tower is squat and rectangular, with a corbelled-out parapet, open rounds at the corners, and a machicolation over the entrance. 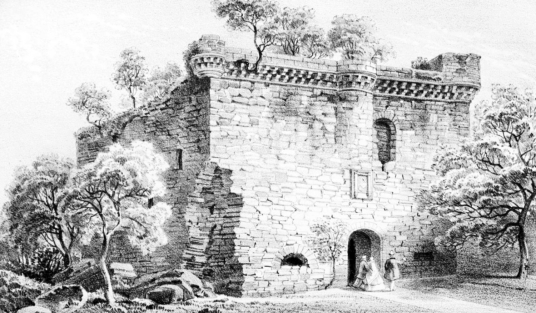 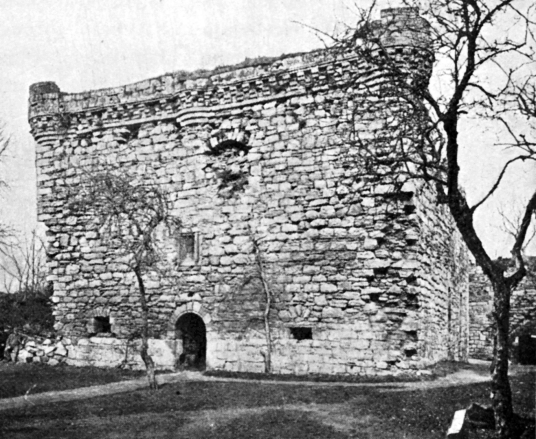 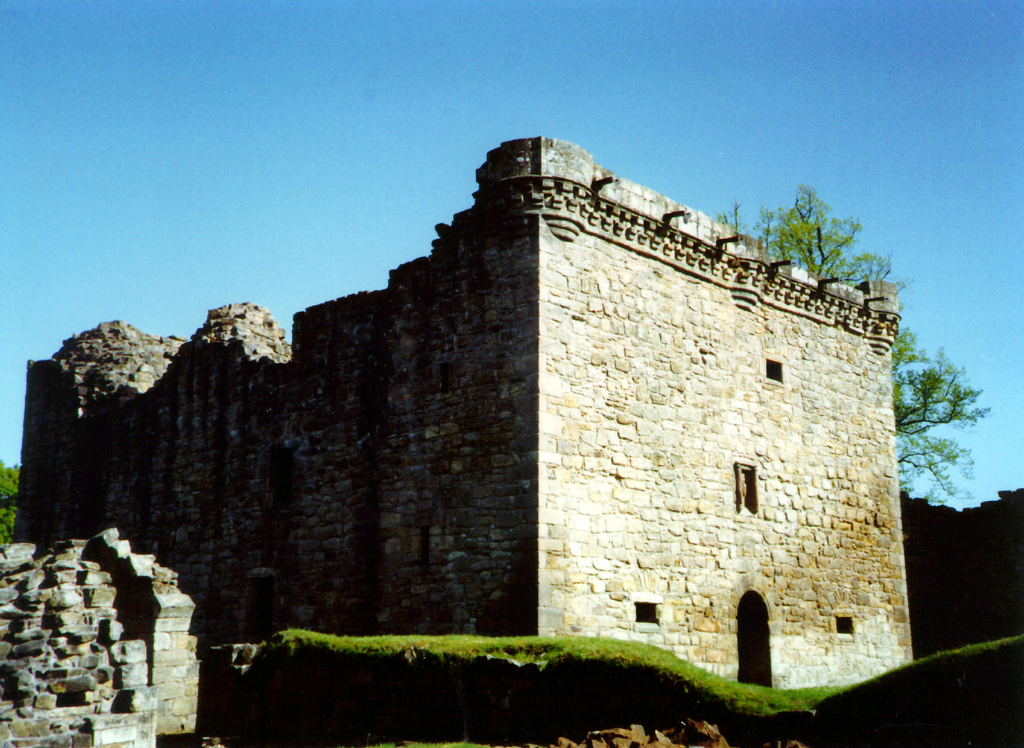 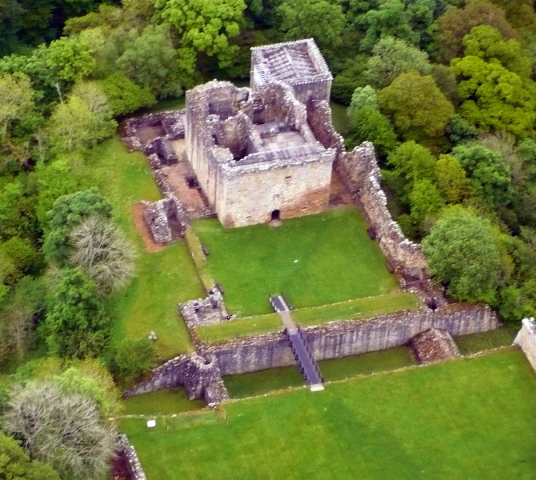 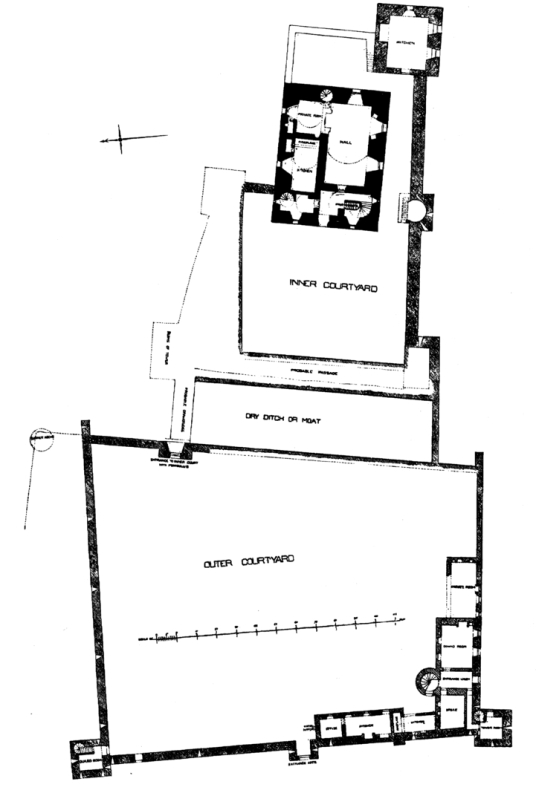 There were large flanking towers, only one of which survives, and a massively thick rampart before the tower, which has been completely demolished. The base of another flanking tower and of the gatehouse survive on one side. In the ditch, before the rampart, is a caponier, rediscovered in 1962 when the ditch was excavated: it must have been claustrophobic and airless if ever used. The ditch was crossed by a drawbridge, which led to the gatehouse. 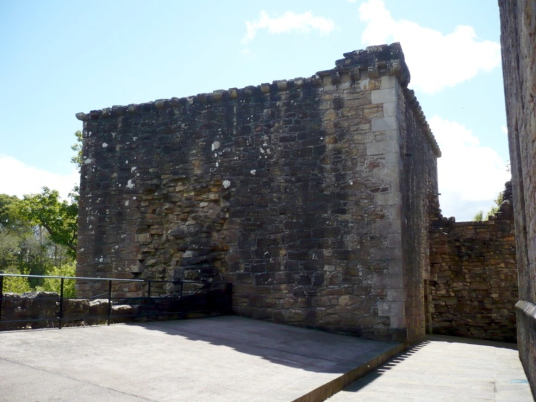 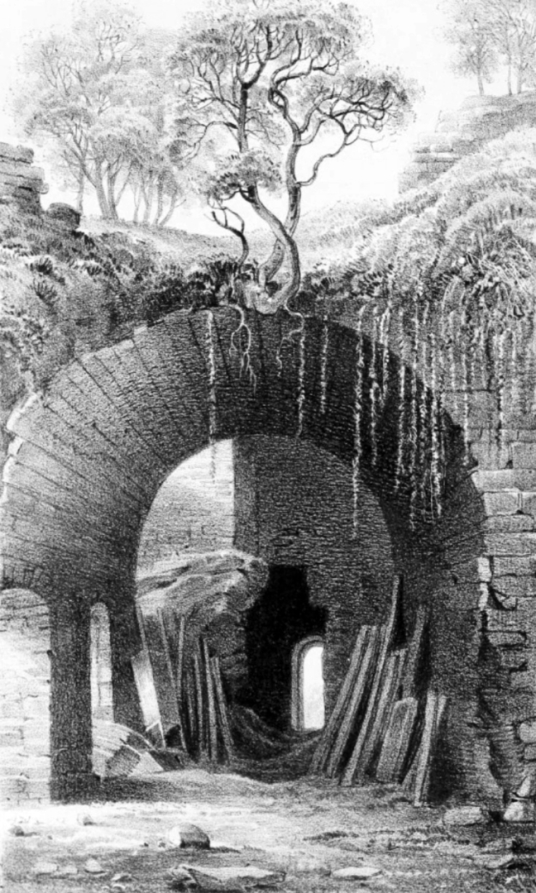 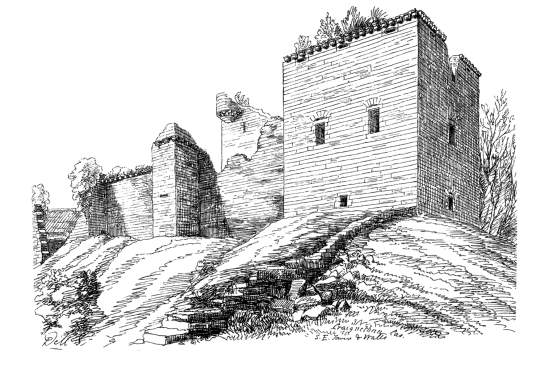 The outer courtyard consists of an enclosing wall with a gatehouse, a corner tower surmounted by a doocot, and another corner tower incorporated into a 17th-century house. 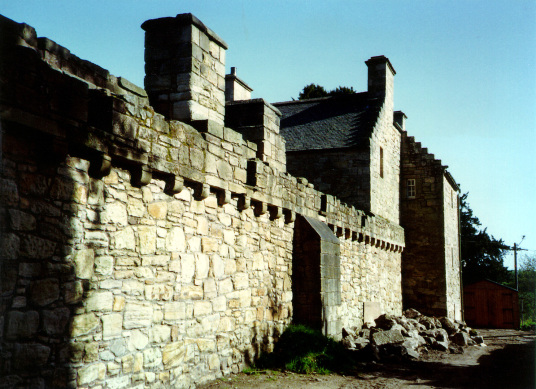 The property originally belonged to the Black Douglases, but passed to the Hamiltons when the Black Douglases were forfeited in 1455. Sir James Hamilton of Finnart, a talented architect and the King’s Superintendent of Palaces, built most of the castle, along with work at Linlithgow Palace, Stirling Castle and Blackness Castle. James V attended a wedding here in 1536. Hamilton was the illegitimate son of James Hamilton, Earl of Arran, and was beheaded for treason in 1540, after a missile was fired at James V in Linlithgow, although his son eventually inherited his lands. In 1543 in procedure the land of Draffan is mentioned, with the castle and fortalice thereof. 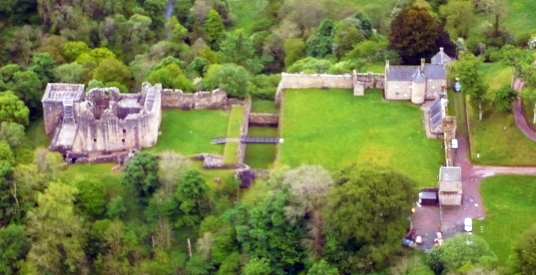 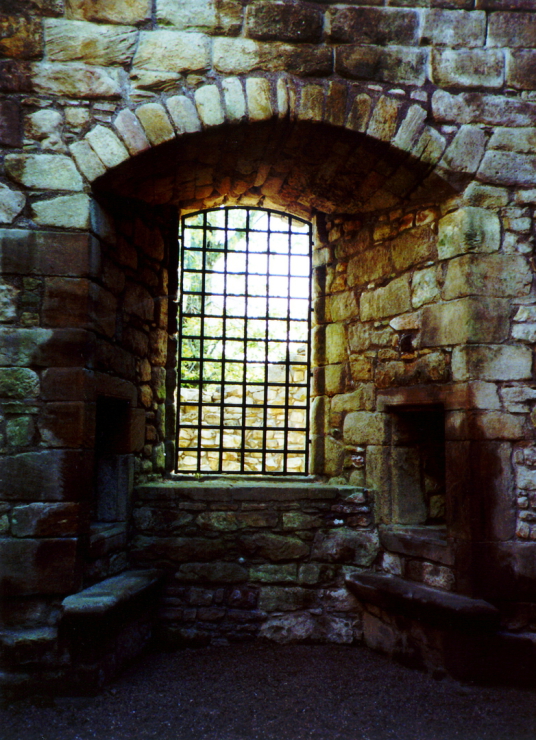 Mary, Queen of Scots, is said to have spent the night here before the Battle of Langside in 1568, although this is not certain. The Hamiltons certainly formed the main part of her army, but were defeated by the Regent Moray and Mary fled to England. The garrison of Craignethan surrendered after the battle, but the castle was retaken by the Hamiltons, was attacked in 1579, then given up without a siege. It was slighted, and much of the defences demolished. It was sold in 1665 to the Hays, who built the house in the outer courtyard. 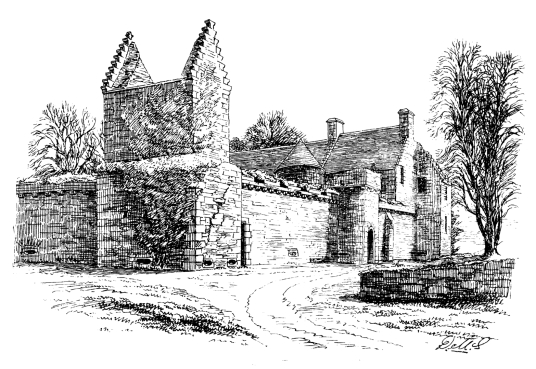 Sir Walter Scott is said to have featured Craignethan in Old Mortality, but called it ‘Tillietudlem’, although the author denid this. Nevertheless, a train station, now closed, was called Tillietudlum Station. The castle passed into the care of the State in 1949, and is surrounded by ancient woodland, frequented by birds of prey, including buzzards, kestrels and sparrowhawks. 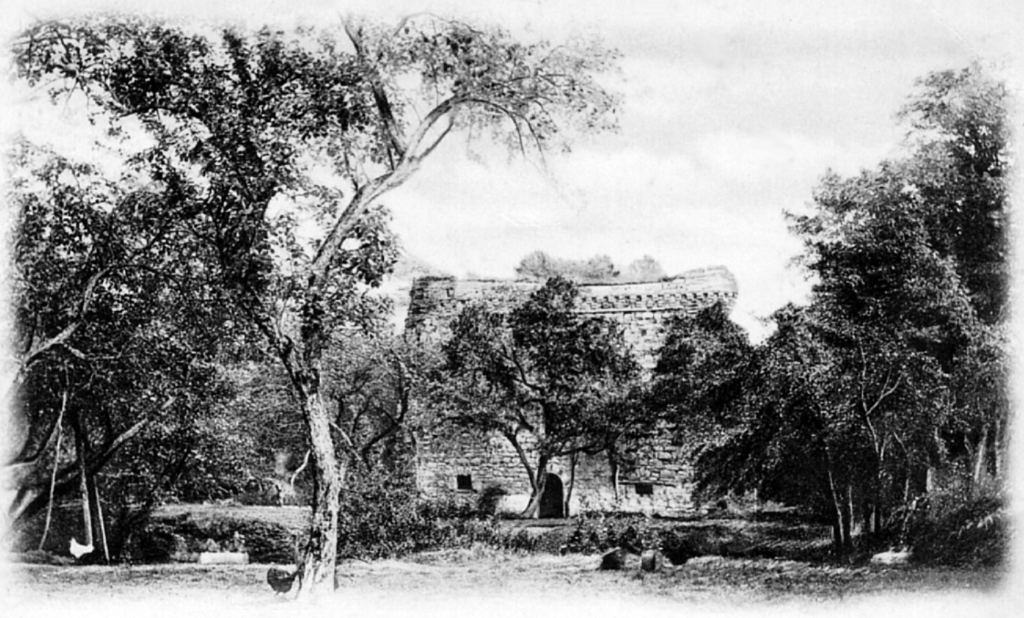 In April 2018 a ‘very angry’ badger managed to get into the passgeway at the back of the castle, and this part of Craignethan had to be closed for some days until the grumpy meline was enticed away, perhaps as a protest against the slaughter of his kin in England to stop the spread of bovine TB. 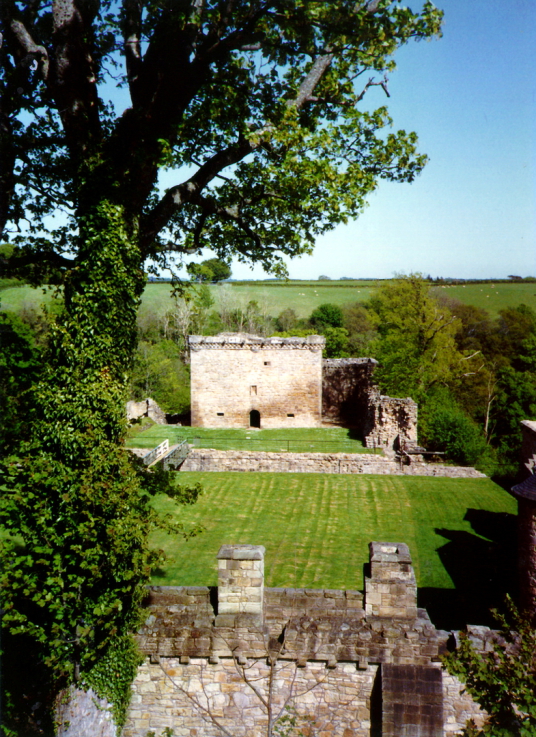 The castle is said to be haunted by a headless ghost, perhaps the spirit of Mary, Queen of Scots, as well as other ghosts and many manifestations in the later house in the courtyard, which contains the tearoom and toilets. The apparition of a woman wearing Stuart period dress has been witnessed in the courtyard, and other unexplained disturbances include pipe music and voices.