Fife: About 4 miles north-east of Kirkcaldy, on minor roads south of A955, near the shore of the Firth of Forth, south of Coaltown of Wemyss. at Wemyss Castle.

OPEN: Gardens may be visited by prior appointment only, May-Jul, Mon-Fri only, 9.30-18.00; castle not open.
Web: wemysscastlegardens.com 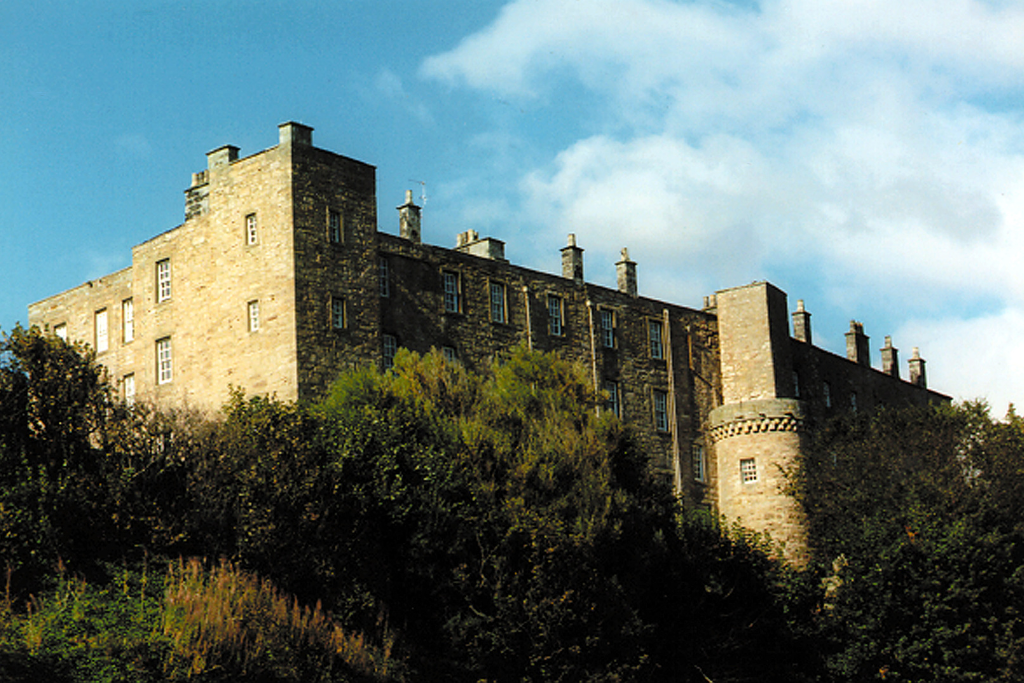 Wemyss Castle originally consisted of a 15th-century rectangular tower and a large irregularly shaped courtyard, with a round tower at one corner, which may date from the 13th century or earlier. Ranges of buildings were built within the courtyard in the 16th century, and in about 1699 a large L-plan block was also added. The castle was extended again, and the courtyard was finally filled in during the 19th century. Most of the Victorian additions were demolished in the 1930s, and the castle was restored back to something like its original appearance. 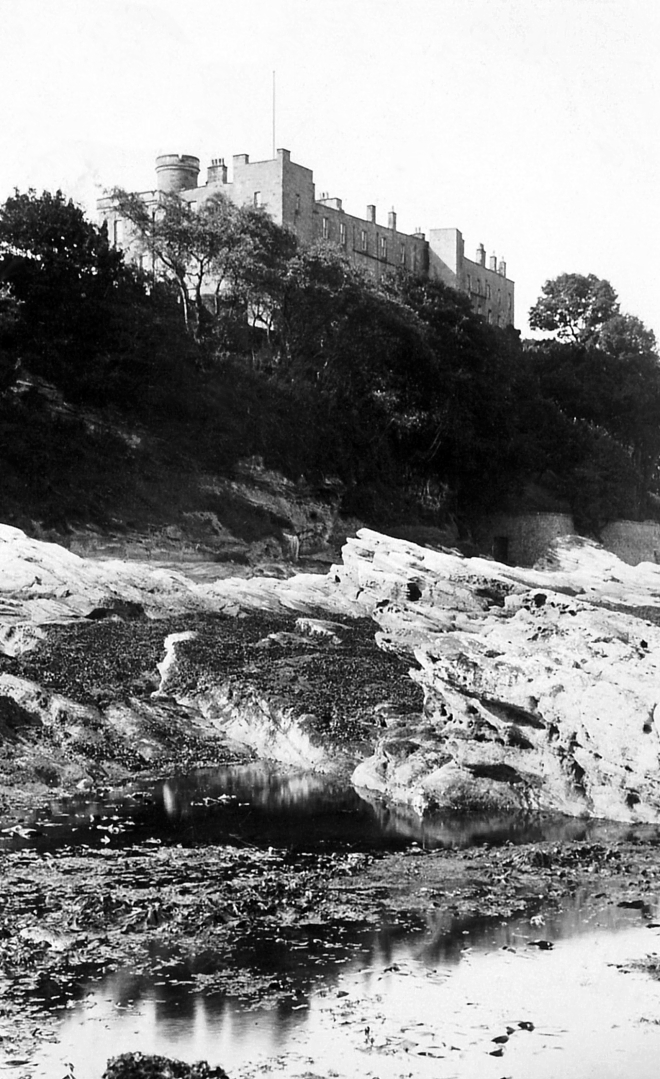 The building has been much altered, but the original curtain wall can be traced, and the basements of some of the buildings are vaulted. A fine 17th-century scale-and-platt stair survives, as does much panelling. There is a six-acre walled garden, which is being restored.
‘Weemis’ is marked on Blaeu’s map of Fife, then ‘Weems’ on Adair’s map of the east part of Fife. 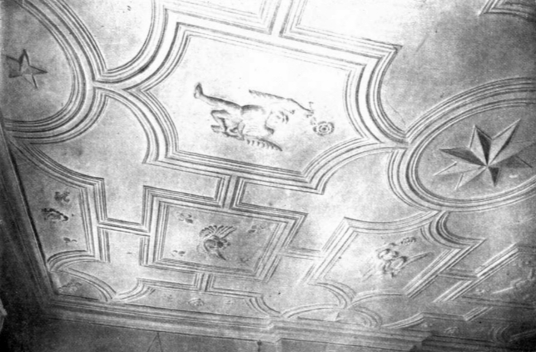 This was a property of the Wemyss family. Sir Michael Wemyss was one of the ambassadors sent to bring Margaret, Maid of Norway, to Scotland at the end of the 13th century, and a silver basin, preserved at the castle, is said to have been given to Sir Michael by the King of Norway. The castle was sacked by the English during the Wars of Independence, and Sir David Wemyss added his seal to the Declaration of Arbroath in 1320. A later Sir David Wemyss was killed at the Battle of Flodden in 1513. Mary, Queen of Scots, first met Henry Stewart, Lord Darnley, here in 1565, and the family fought for her at Langside in 1568. 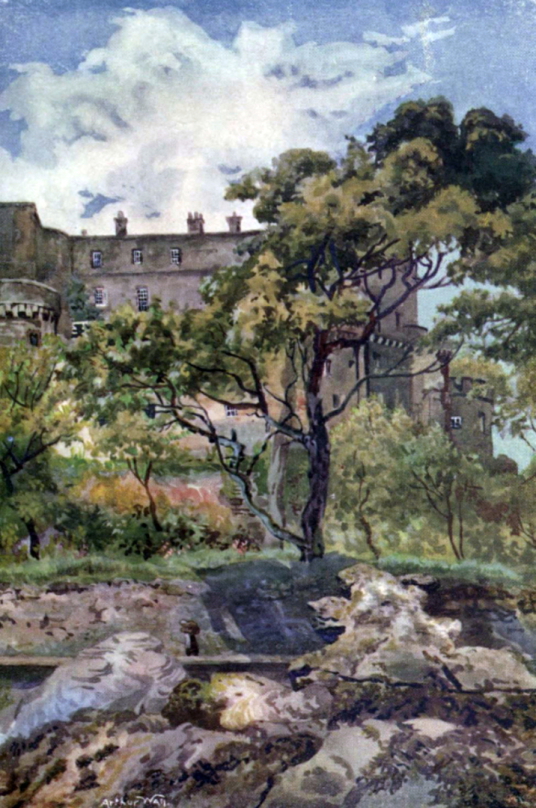 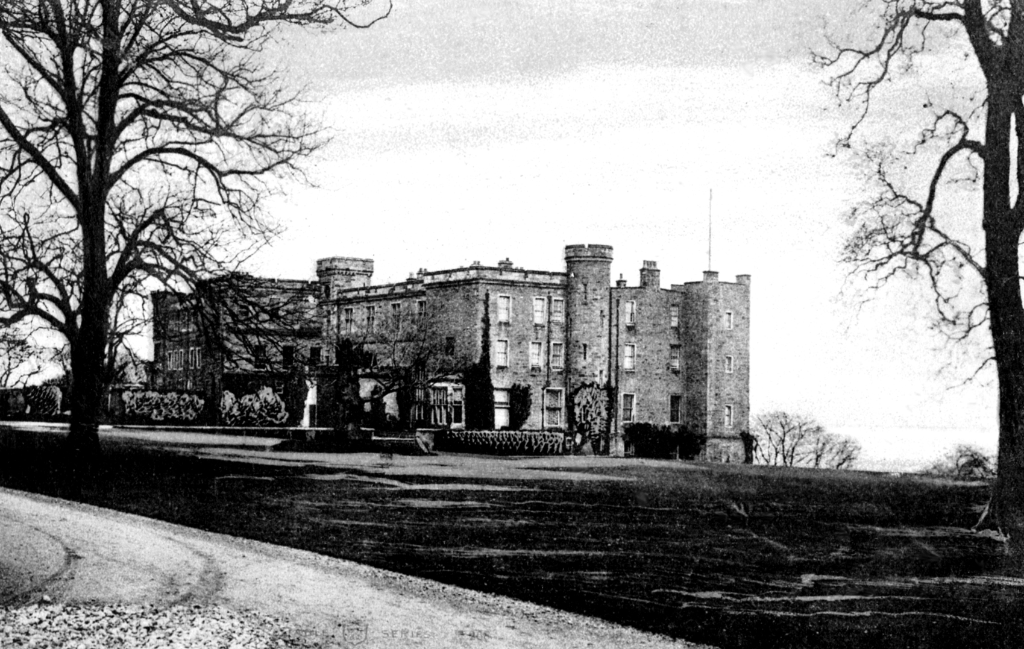 John Wemyss, Lord Wemyss of Elcho, was made Earl of Wemyss in 1633, and Charles II visited in 1650 and 1651. David Wemyss, Earl of Wemyss, had a ratification of 1661 which mentions the castle, tower, fortalice, manor place and mains thereof. The family were forfeited for their part in the Jacobite Rising of 1745-46. The title was restored in 1826, and the family name was latterly Charteris. The castle was used as a hospital during World War II. 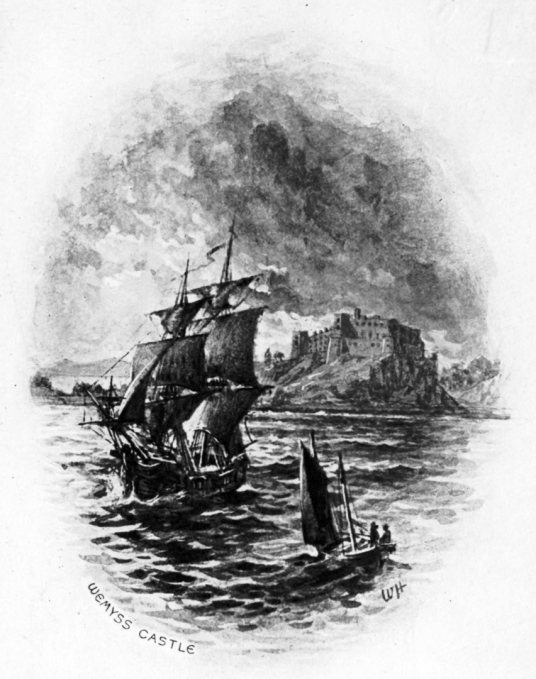 The Wemyss family still occupy the castle, and there is a burial enclosure for the family at West Wemyss [NT 319947]. The Earldom of Wemyss, along with March, is now held by the Charteris family, who own Gosford House.
The gardens feature a woodland gardens and walled garden.
A ‘Green Lady’ – Green Jean – reputedly haunts the castle, and is said to have been seen in all parts of the building, and by family and servants. In the 1890s she was described as ‘tall and slim and entirely clad in green, with her visage hidden by the hood of her mantle’. She was also seen in 1904, when one of the family walked along side her until she disappeared. Her dress is said to ‘swish’.

My last reminiscence will be a ghost story for which I can vouch the truth.

My sister Millicent (who, as I have said married Mr. Hay Erskine Wemyss, of Wemyss Castle) herself told me the story.

There was a large party staying at Wemyss Castle for Christmas, and my sister had arranged some theatricals for Christmas evening for the amusement of her guests.

I ought to have begun by stating that "the ghost" of Wemyss Castle was always styled "Green Jean," and was supposed to appear in the form of a beautiful, tall, slim lady, clad in a long gown of green that "swished" very much as she walked, or rather, glided, by. No one seemed to know her history, or, at all events, it was a subject which was to be avoided. But to my story.

Everything had been prepared for the theatricals, which were to take place in a large room, which was then used as a dining-room. A stage had been placed at the further end, and a curtain was hung in readiness. It must be noted that there was a small room which led from the stage, its door being in front of the curtain, and in view of every body. This door was kept shut, the room being generally used by the butler to keep glasses, etc., in. At the time it was perfectly empty.

On the afternoon in question, two girls, my sister's eldest daughter and a girl friend, were sitting over the fire … talking over the coming theatricals. Nothing could be heard but their two voices, and the violent rain which was pouring against the windows. Suddenly a rustling sound smote their ears, as if coming from the stage. They looked up; the curtain, however, remained down. But presently it was gently pushed aside to make room for the entry of a tall, pale-looking lady dressed in green, who held a sort of Egyptian lamp (lit).

The lady took no notice of either of the girls, but, holding the lamp well in front of her, she walked calmly (her long gown "swishing" after her as she went) up to the door, before mentioned, in front of the curtain. She opened it, passed into the room, and closed it noiselessly. My niece was much excited. She sprang to the door, and taking the handle in her hand she called out to her companion, "Get a candle quickly; there is no way out of the room into which she is gone, and it is quite dark." The other girl hurriedly brought a light and ran to the door. They opened it. It was pitch dark—no sign of the Green Lady. To their amazement she had disappeared into space.

Not long after my sister's carriage was heard driving up to the door. The two girls rushed out to meet her, and told her "We have seen 'Green Jean!' My sister knew the effect such a report might have upon the visitors and the servants, and that it might alarm the latter so much as to spoil the arrangements and the pleasures of the evening. She was not the person herself to be alarmed at a ghost, but she feared the effects of such a report upon the others, so the story was hushed up.

Not long after my sister herself saw the Green Lady … On the evening of the event I am about to relate, it was, as often is the case in bonnie Scotland, a pouring wet night. My sister's son had been out riding most of the day, and he being at that time rather delicate-chested, his mother was anxious … as regards his health, she … walked through into his bedroom, which was lit by gas. Seeing that his wet clothes were all lying on the ground she was satisfied, and made good her way out on to the gallery, when, to her surprise, she saw, about 20 yards off, coming towards her along the gallery, a tall lady in green! Although the house was full of guests, my sister could not conceive for a moment who this lady could be, for it was some one she had never seen before.

The lady walked in a slow, dignified fashion, and seemed in no way put out at seeing another person on the gallery. For a moment my sister stared in astonishment, but in a flash she felt who it was.

"It is 'Green Jean,' " she said to herself," and I shall wait till she comes up to me, and then I shall walk by her side, and see what she will say." She waited. "Green Jean" joined her, but turned her head away! My sister moved on by her side, but, as she afterwards told me, she felt tongue-tied. The figure accompanied her to the end of the gallery, and then—was gone.

My sister felt, I think, annoyed with herself for not having done or said something. But when afterwards some one rebuked her for her faintheartedness, she said truly, "I walked by her the whole length of the gallery, and I don't think there are many who would have done that—but speak I could not."

The Duke of Argyll, in his "Real Ghost Stories" in the London Magazine for November, 1901, tells of three other apparitions of apparently the same Green Lady, as often described to him by "the late Miss W. who lived in a castle in Fife." She had not seen anything supernatural for the first seventeen years of her life in the place, which, although altered for modern use, is throughout a large portion of the building of ancient date. One winter eve, a joiner was working in a little room which could only be reached by traversing the billiard-room, in which there was a fire, but no other light. The joiner had a lamp and Miss W. stayed with him a little time and then left him. As she re-entered the billiard-room, she felt there was somebody or something there, which craved her attention. She had a curious, indefinite feeling such as some have when another's eyes are resting on them. She looked up and saw at the other end of the billiard-room a misty, but defined figure advancing towards her. "The Green Lady" she at once thought, and stood still. The figure coming towards her was moving slowly. While passing the firelight, rather curiously, Miss W. remarked that it was not reddened by it or made more distinct. The grey indefiniteness of the moving person kept the same neutral colour and was still advancing, though not now, more than ten feet away. Then it turned a corner of the billiard-table and without pause or change of pace or attitude went on—through the wall! The same week this identical figure was seen twice by other inmates of the castle—once in a passage upstairs and once in a room. Since this triple appearance the Green Lady, who seems to have of late appeared in grey, has not been seen. - F. H. & J., 8th February, 1905. 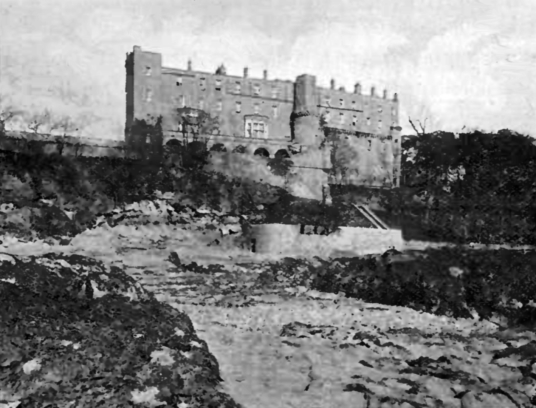 One other small circumstance I recall, also of Castle Wemyss … My sister was going to have a baby. She had been suffering a good deal from many causes, and one was that her husband, Hay Wemyss, was in a very bad state of health. His sister, Fanny Balfour (since dead), told me the story. Poor Millicent had gone to bed, and Hay and his sister were talking about going to London, which they were about to do in a day or two. They were looking out of one of the windows which had a lovely view, and some terraces had lately been built going down towards the sea. The moon was shining brightly, and Hay said to his sister that he felt very ill. As they spoke together there was a crash, and part of one of the terraces smashed and fell. He turned to Fanny and said, "I am a dead man! for as a warning to the owner of Wemyss Castle of his early approaching death a piece of masonry always falls!"

Fanny tried to laugh him out of the idea, but he would say and hear no more. In a few days they went to London, and Hay Wemyss of Wemyss Castle died a fortnight before his youngest son was born.