Sutherland & Caithness: About 1 mile south of Dunbeath, on minor roads east of A9, north-east of Dunbeath Mains, just west of the sea, at Dunbeath Castle. 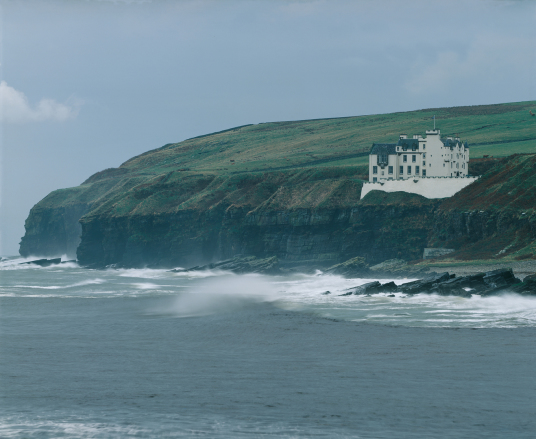 Standing on a spectacular location on top of cliffs above the sea, Dunbeath Castle is a 17th-century E-plan tower house of four storeys, to which has been added later wings, although it may incorporate work from the 15th century. Two-storey bartizans crown three corners and two stair-turrets are corbelled-out above first-floor level to be topped by square watch-chambers. The walls are harled and whitewashed, and are pierced by many gunloops and shot-holes.
There is a lectern-style doocot [ND 153290], dating from the 18th century or earlier, and two walled gardens. 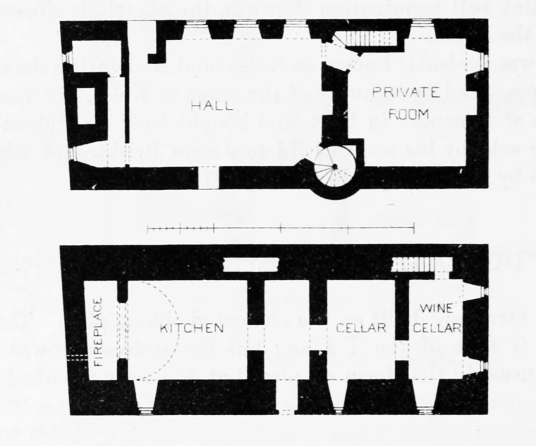 The castle has been much altered inside, but the basement is vaulted. It contained the kitchen, with a large fireplace, and a wine-cellar, with a small stair to the hall above, as well as other cellars. There is a very narrow secret stair. A turnpike stair, in one of the turrets, leads to the upper floors. 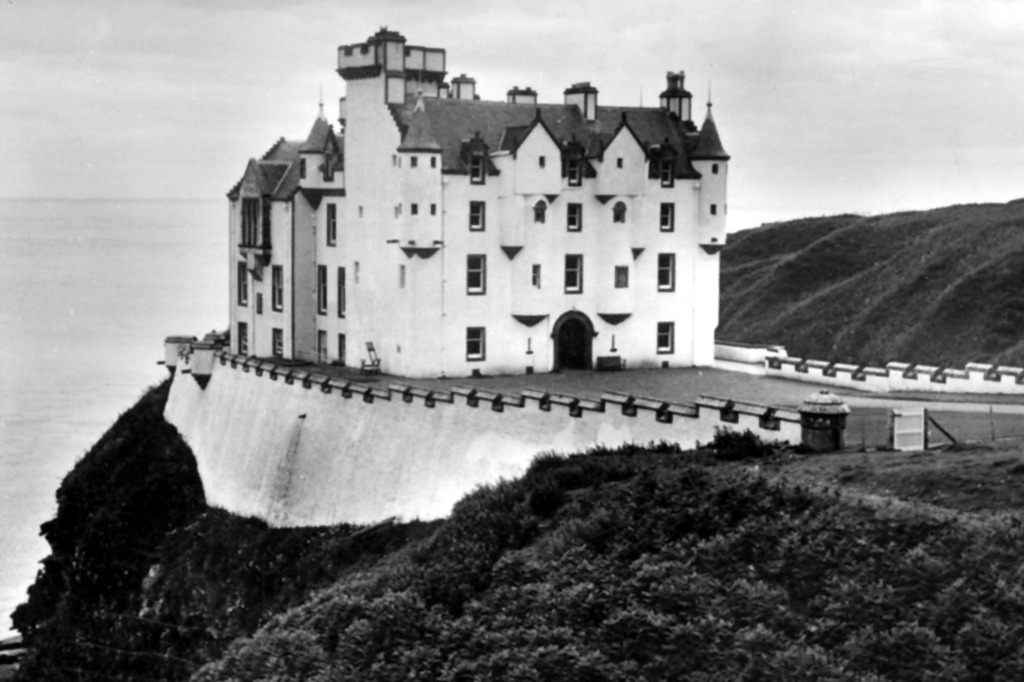 There are two lovely walled gardens, the northern laid out as a conventional garden with separate rooms, the southern a water and fantasy garden. Fig and apricots are grown here, despite winter gales with winds of sometimes 100mph gusts and salt spray.
‘Dun Beth’ is marked on Blaeu’s map of Caithness, where it is depicted as a tower on an island. 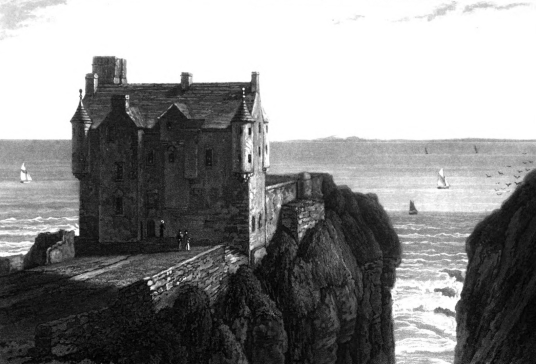 The property was held in 1452 by the Crichtons, but appears to have gone to the Keiths as in 1496 as William Keith of Inverugie complained that, although the castle had been delivered up to him by William Sinclair, Earl of Caithness, Sinclair had then made off with much of Keith‘s property, including a feather bed without a bolster, an old counting table and some weaponry and armour. 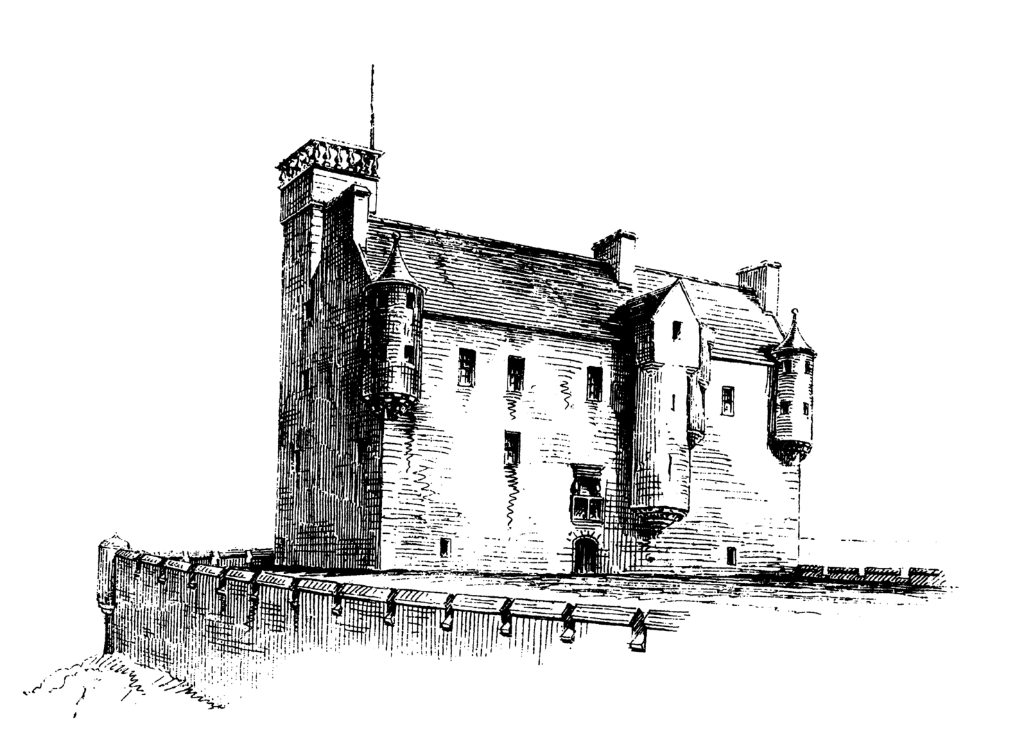 By 1507 Dunbeath had passed to the Innes family, and they held it until 1529 when it was acquired by the Sinclairs of Geanies, who built much of the existing building about 1620. Sir John Sinclair of Dunbeath is on record in the 1640s, then William Sinclair of Dunbeath towards the end of the 17th century. The castle had been besieged and taken by a force for the Marquis of Montrose in 1650, but it was quickly recaptured after his defeat at the Battle of Carbisdale. 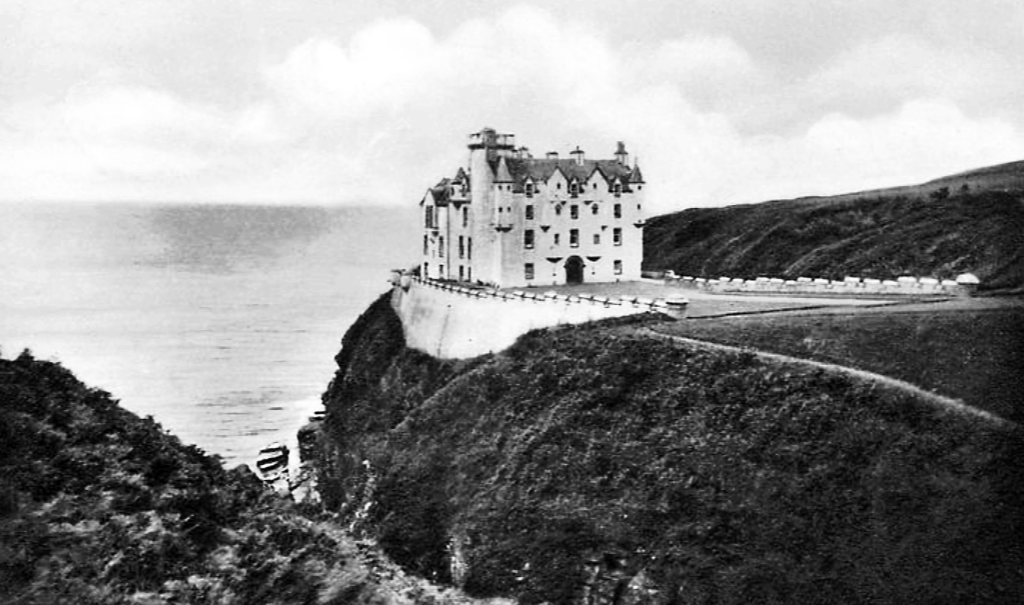 The family were made baronets in 1704, and now live in London in England, having sold the property in 1945. The house was altered in the 1850s by the architect David Bryce and in 1881, and is still occupied.
Members of the family were buried at Latheron Old Parish Church [ND 202332].
The Dunbeath and Glutt estates cover some 45,000 acres.