Sutherland & Caithness: About 5 miles west and north of Thurso, on minor road north of A836, just south of sea at Port of Brims, at Brims Castle. 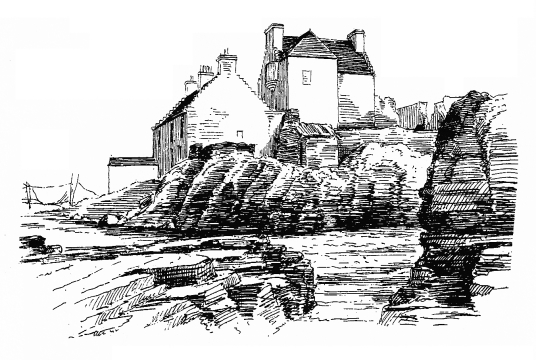 Brims Castle is a ruinous 16th-century L-plan tower house of three storeys and a garret, consisting of a main block and square stair-wing. An open turret crowns one corner above the entrance, and the gables are corbiestepped. The original windows are small. A walled courtyard, with a moulded gateway, encloses ranges of later buildings.
The entrance, at first-floor level in the wing, is reached by a later external stair. The basement is vaulted, and reached by a small stair from the hall on the first floor. Private chambers occupied the upper floors. 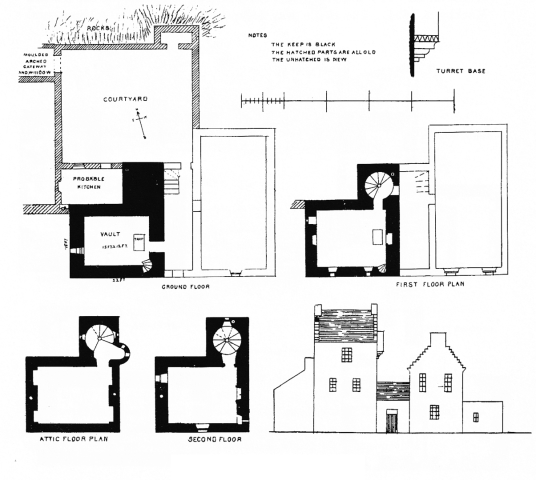 ‘Brims’ is marked on Blaeu’s map of Caithness, and is depicted as a tower.
Brims was a property of the Sinclairs, and James Sinclair of Brims Ness is on record in 1643. The property then passed to different branches of the Sinclair family. The castle was occupied until the 1970s, but is now derelict and roofless.
Brims is said to have a ‘White Lady’, the ghost of the daughter of James Sinclair of Uttersquoy. The attractive young woman was lover to Patrick Sinclair of Brims, but the story goes that he tired of her, murdered her and then hid her body in the castle.
There is a small ruinous chapel [ND 284882], dedicated to St John, and a burial ground.