Scone Palace, a fabulous castellated mansion house with a magnificent interior and wooded landscaped grounds by the River Tay, long held by the Murray Earls of Mansfield and near Perth in central Scotland. 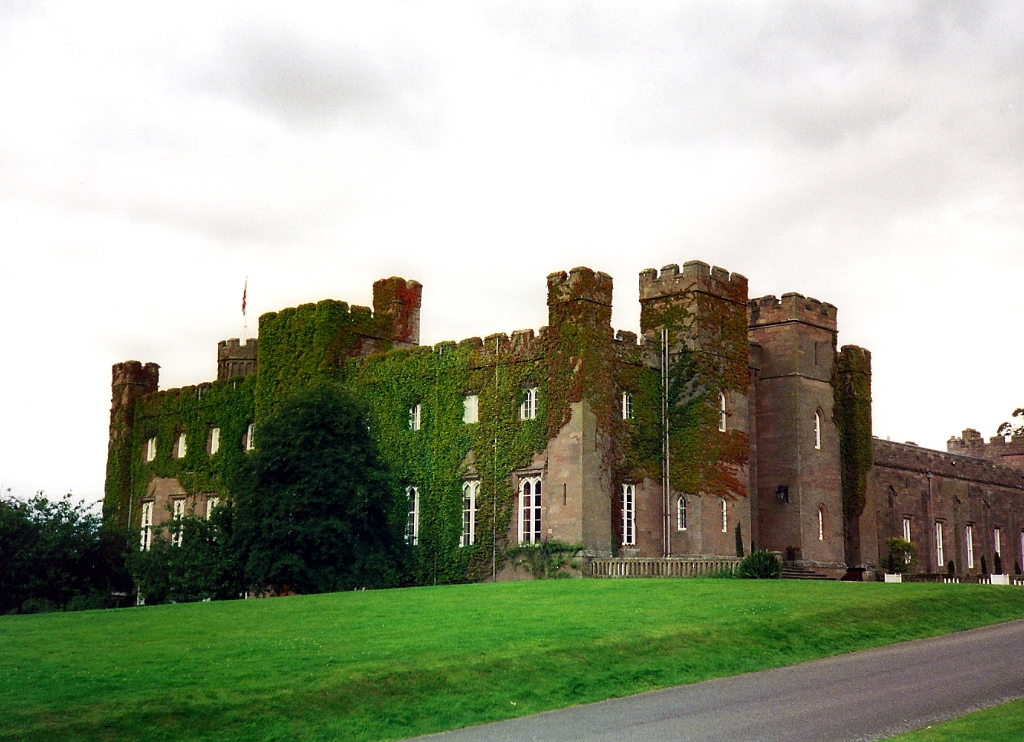 Perthshire: About 2.5 miles north of Perth railway station, on minor road west of A93, east of River Tay, 0.5 miles west of Old Scone, at Scone Palace. 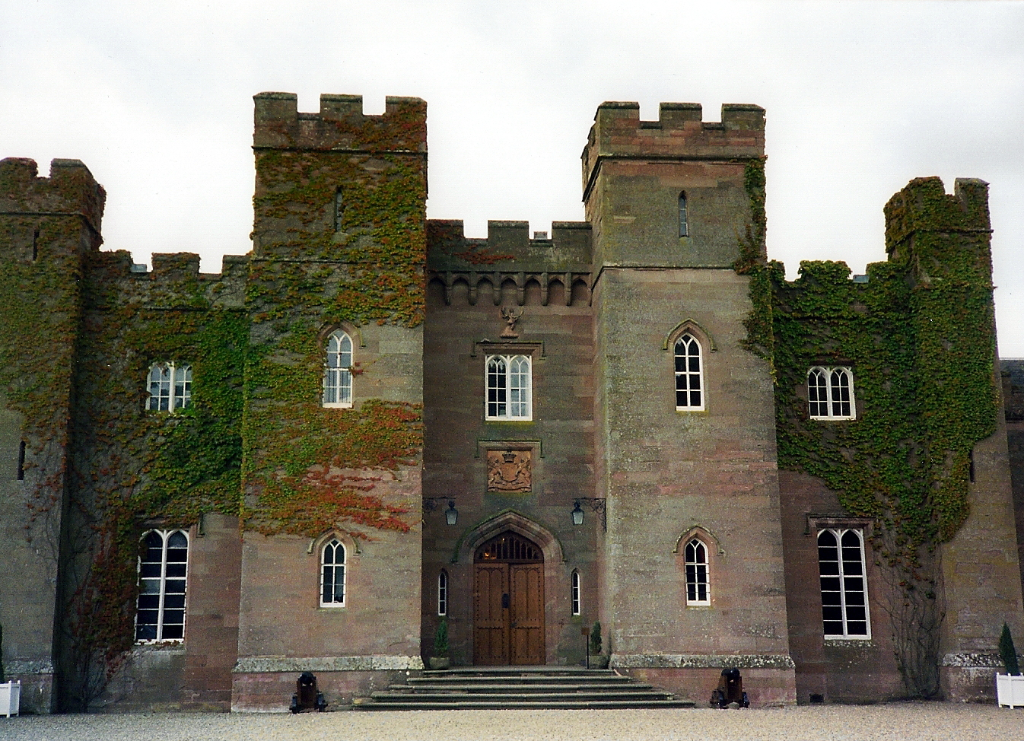 Set in many acres of policies, wild gardens, woodlands and a pinetum, Scone Palace is a large and imposing Gothic mansion, dating from 1802 and designed by the architect William Atkinson. The name is pronounced ‘Skoon’, and the palace incorporates part of the house built by the Ruthvens in the 1580s, itself probably created out of the Abbot’s Lodging of the former abbey. The fine grounds are also home to peacocks, including several white males.
The palace has a sumptuous interior, and a particularly grand feature is the royal gallery, which is some 142 foot long. 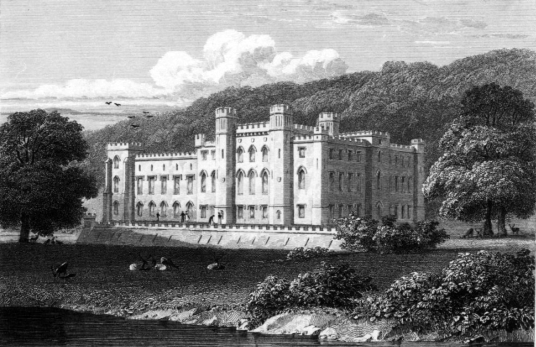 ‘Skone’ is marked on Pont’s map of Angus and Perthshire, and what appears to be a large ecclesiastical building is depicted. 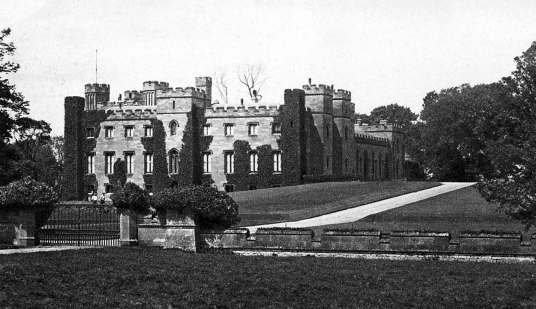 Scone was a centre of the Picts, and in the 6th century a Culdee cell of the early Celtic church was founded here. The Kings of Scots were inaugurated at the Moot Hill, near the present palace, from the reign of Kenneth MacAlpin, including MacBeth, Malcolm Canmore, Robert the Bruce and the first six Jameses. An abbey had been founded here in the 12th century, and the Stone of Destiny, also called the Stone of Scone, on which the monarchs were crowned, was kept here, until thieved and taken to Westminster Abbey by Edward I of England in 1296 – although this was returned to Edinburgh Castle in 1996. The last king to be inaugurated at Scone was Charles II in 1651, who also stayed at the palace. 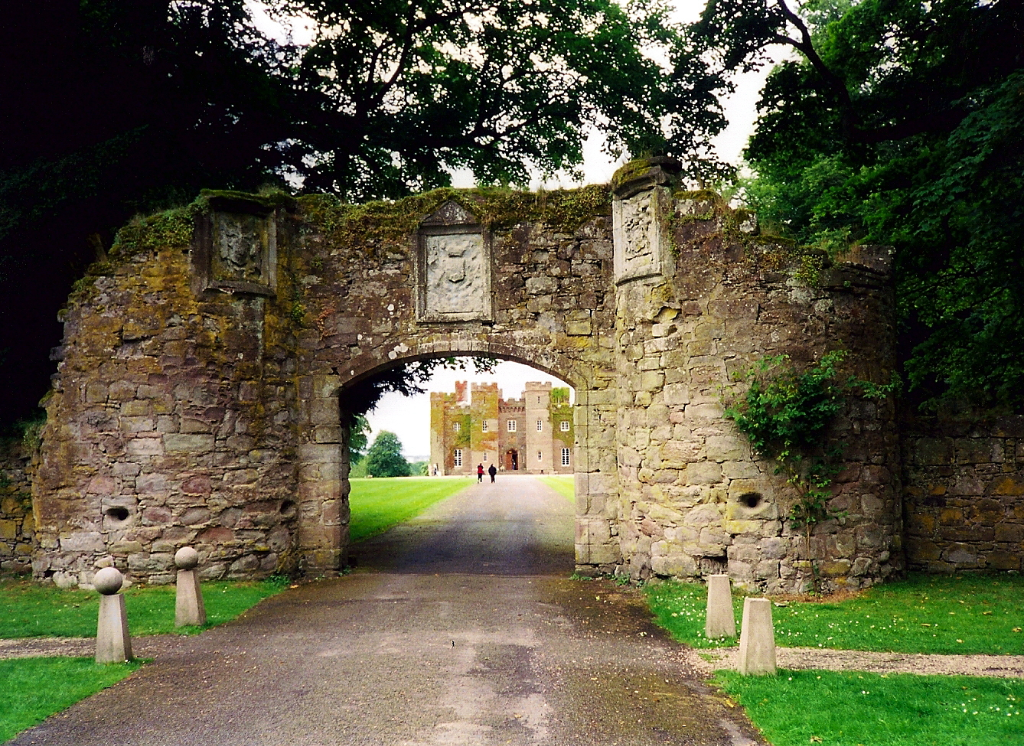 The abbey had been sacked by a Protestant mob in 1559, and there are no obvious remains. The property passed to the Ruthvens in 1580. After the Gowrie Conspiracy (also see Huntingtower and Gowrie House) in 1600, however, when John Ruthven, 3rd Earl of Gowrie, and his brother, Alexander, the Master of Ruthven, were slain by James VI and others, Scone passed to the Murrays. Sir David Murray of Gospertie had been one of those to save the king’s life (or at least to stop James being forcibly kidnapped or perhaps it was just revenge). The family moved from Balvaird Castle [NO 169118], and Murray was made Viscount Stormont in 1621, and then the family became Earls of Mansfield in 1776. 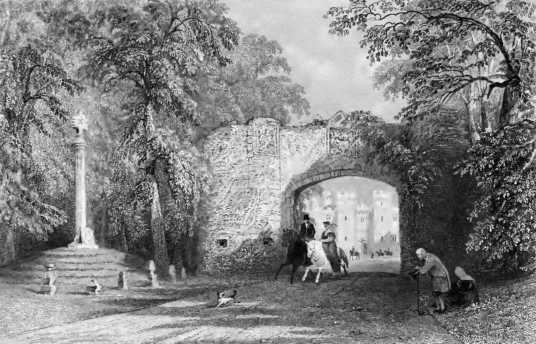 James VIII and III held ‘court’ at Scone in 1716 during the Jacobite Risings, although by then the Jacobite Rising had all but fizzled out and James soon fled abroad again, and Bonnie Prince Charlie visited in 1745.
The building is said to be haunted, and ghostly footsteps have been heard in the south passage.
The old village of Scone was moved to New Scone in 1804-5, as it was too close to the Palace for the then owners. On the Moot Hill is Scone Palace Chapel, used as a mausoleum and containing the exuberant alabaster monument to commemorate David Murray, 1st Viscount Stormont. 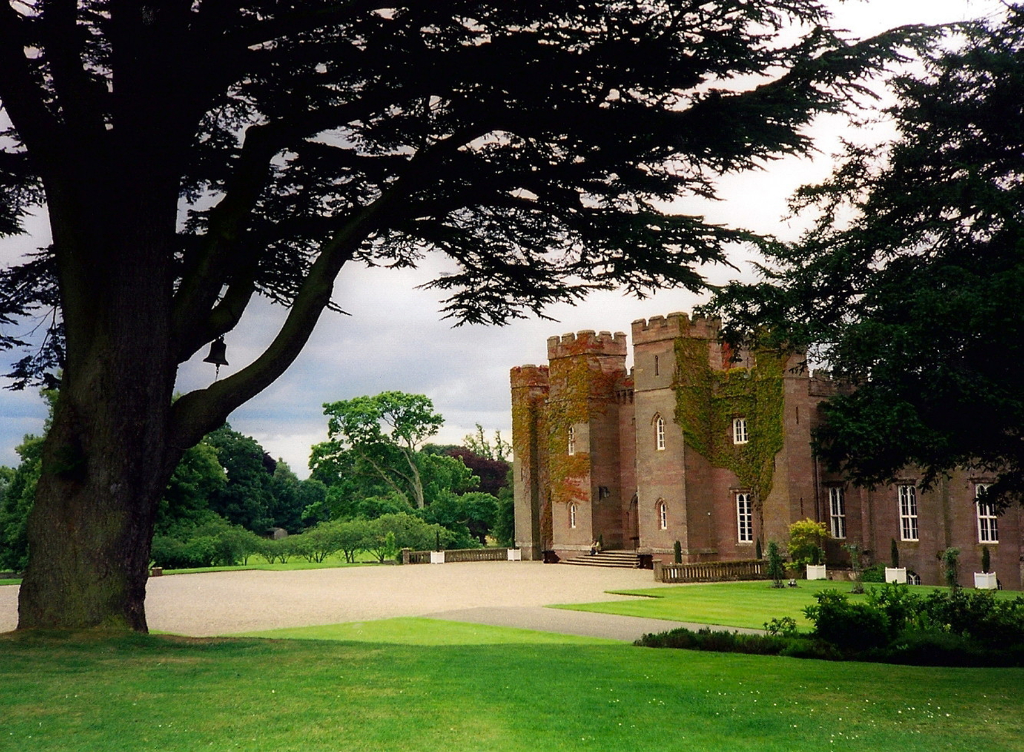 The palace is still home to the Murray Earls of Mansfield, who also have the titles Viscount Stormont (held by the heir) and Lord Scone and Lord Balvaird, as well as hereditary keepers of Lochmaben Castle. The present Earl of Mansield is Alexander David Mungo Murray, who succeeded in 2015.

The palace features in Mary Berry’s BBC TV series Country House Secrets in 2017. The Earl and Sophia, Countess of Mansfield, daughter Lady Iona and son William, Viscount Stormont, all took part, with many of the palace and estate staff. 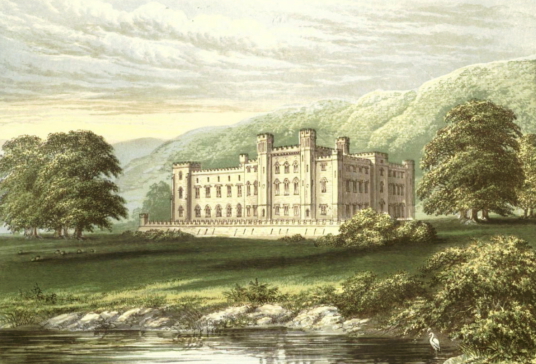 Scone Palace, it need hardly be here stated, was in ancient times a favourite residence of the kings of Scotland, and the celebrated stone on which they sat when crowned, was carried from Scone by Edward the First, and is now placed in the coronation chair in Westminster Abbey. This stone is stated by Sir James Ware to have been first brought to Ireland by the colony of the Inath de Danans, and thence removed to Scotland when Fergus, the first king of Scotland, who was descended from the blood royal of Ireland, was crowned on it.

The situation of this seat is extremely beautiful, the Tay flowing at the edge of the park in view of the windows, while on the opposite side is the rich scenery about Perth, and on the right the Grampian Hills bound the distant view.

The palace and the abbey were both dilapidated under Henry the Eighth, but the former was restored in the early part of the seventeenth century, and here King Charles the Second was crowned in the year 1651, ten years before the ceremony was again performed in Westminster. Here also the Pretender, the Chevalier St. George, was crowned in 1715.

In the year 1803 the old palace was removed by the then Earl of Mansfield, and in its stead he erected the present mansion, which was completed in 1806. It is two hundred and twenty feet long, and the sides are one hundred and thirty on the north and the south.

The rooms are very fine, and contain many curiosities and paintings, and among the latter portraits of King Charles the Martyr, by Vandyke; the Marquis of Montrose; Lord Mansfield, the great lawyer, by Sir Joshua Reynolds; also his successor, and the next Earl and Countess, by Sir Thomas Lawrence.

In the state bedroom is a bed presented by King George the Third to the then Earl. It is of crimson damask, with the full arms of Britain embroidered in gold at the head and the top. In an adjoining room is a bed in which Queen Mary slept, the hangings worked by herself while a prisoner in Lochleven Castle; in another one which her son, James the Sixth of Scotland and First of England, used. In these apartments there are several curious portraits of members of the Royal House of Stuart.

In the cloisters, between the gallery and the corridor, are full-length portraits of George the Third and Queen Charlotte, by Ramsay, and some ancient coats-of-arms, carved in stone and built into the wall.

There are in all in Scone Palace one hundred and twenty-five rooms, and it is stated that of these ninety are bedrooms.

In the library is the woolsack on which the Lord Chief Justice Mansfield used to sit in the House of Lords. He was born in Scone Castle in the year 1705, and died in 1793, in his eighty-ninth year.

From: A Series of Picturesque Views of Seats of the Noblemen and Gentlemen of Great Britain and Ireland, Volume I (by F. O. Morris, 1880s)