Lanarkshire & Glasgow area: About 3 miles north-west of Biggar, on minor road west of B7016, at Shieldhill Castle. 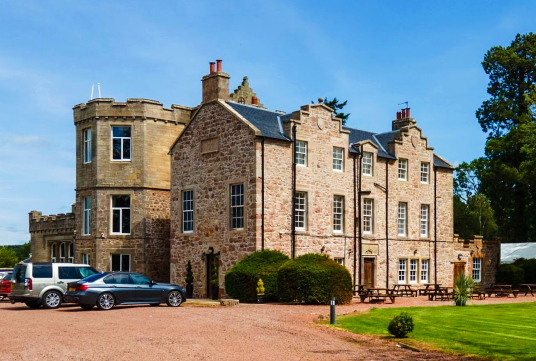 Set in rolling hills and six acres of gardens and wooded park land, Shieldhill incorporates a massive square tower, said to date from as early as 1199. The castle was extended and altered in the 16th and 17th centuries, and again in 1820. The tower is now the entrance hall to the house, which is a rambling three-storey mansion with lower extensions.
This was a property of the Chancellor family. The family supported Mary, Queen of Scots, and fought for her at the Battle of Langside in 1568. As a result their house at Quothquan was burned by the forces of Regent Moray.
The minister at Quothquan accused John Chancellor of Shieldhill’s wife and daughter of resorting to charms to restore the health of a sick child. His daughter attended the presbytery, and kneeling before them had to confess her guilt. In 1639 John was charged with breaking down the door of Quothquan Kirk, in order to bury his wife within, and he was censured by the kirk session.
James Chancellor of Shielhill was imprisoned for helping fugitives from the Battle of Bothwell Bridge in 1679. He later took ‘violent possession’ of the lands of Parkholm, which had belonged to Carmichael of Bonnyton until a deluge had altered the course of the River Clyde. Carmichael crossed the river and cultivated the land for several years, but when Carmichael died in 1688 Chancellor and his neighbours claimed that, since the river had been the boundary between the lands, this portion was rightfully theirs. During harvesting, they imprisoned local folk in their homes. Chancellor was charged with riot, but the case was not proven. In 1695 the Lords of Session decided that Parkholm should remain Carmichael property, and James was made to pay 300 merks in recompense.
Shieldhill was occupied by the Chancellor family until the 20th century, and since 1959 has been a hotel. This closed in 2019 and was sold for in the offers of £750,000 and has reopened after an extensive and thorough refurbishment, which included the commissioning of a special new tartan from Mill Calzeat.
The building is said to be haunted by a ‘Grey Lady’, the ghost of the young and beautiful daughter of one of the Chancellor lords who died in tragic circumstances. She is said to be seen wrapped in a grey cloak. There are are several versions of what happened to her.
It was at a nearby fort that William Wallace is said to have rallied his men before going on to victory over the English at the Battle of Biggar in 1297. 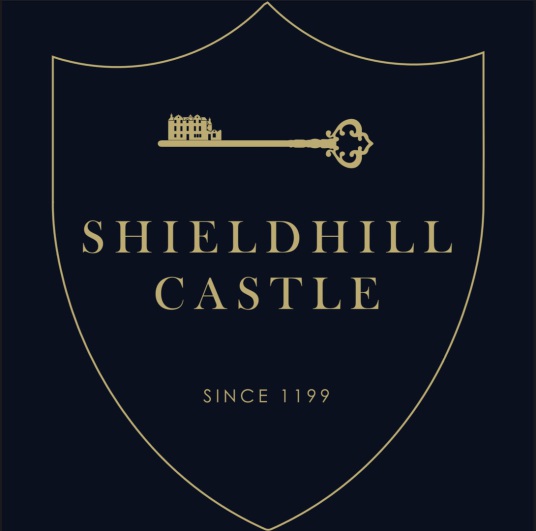