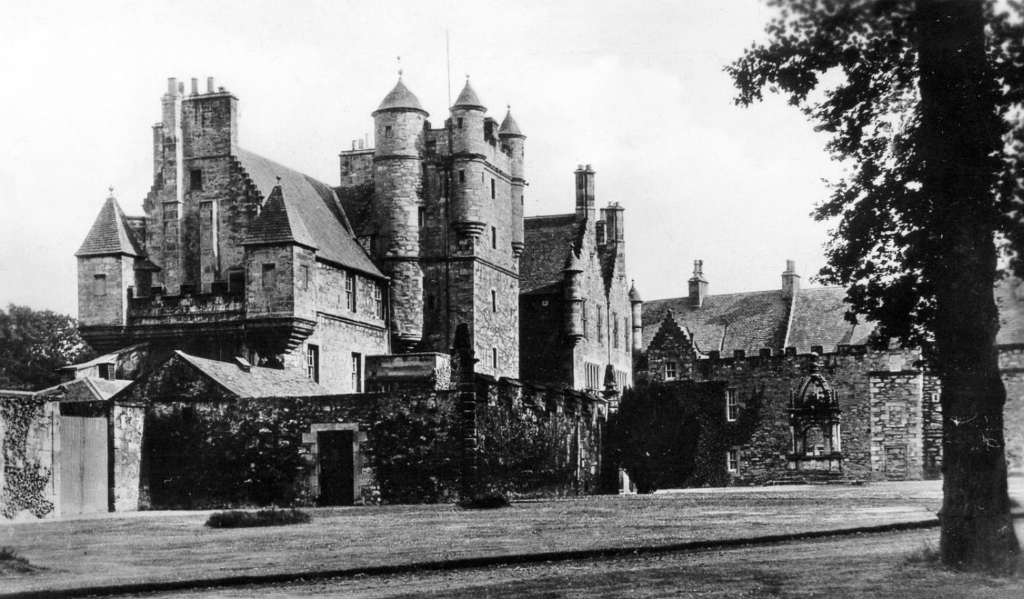 Pinkie House is an altered 16th-century L-plan tower house, of three storeys, to which has been added 17th-, 18th- and 19th-century extensions. The old part consists of a strong main block and square tower, and has steeply pitched roofs, and may date from the 14th century. The square tower rises to five storeys, and is topped by a flat roof with a crenellated parapet and bartizans. 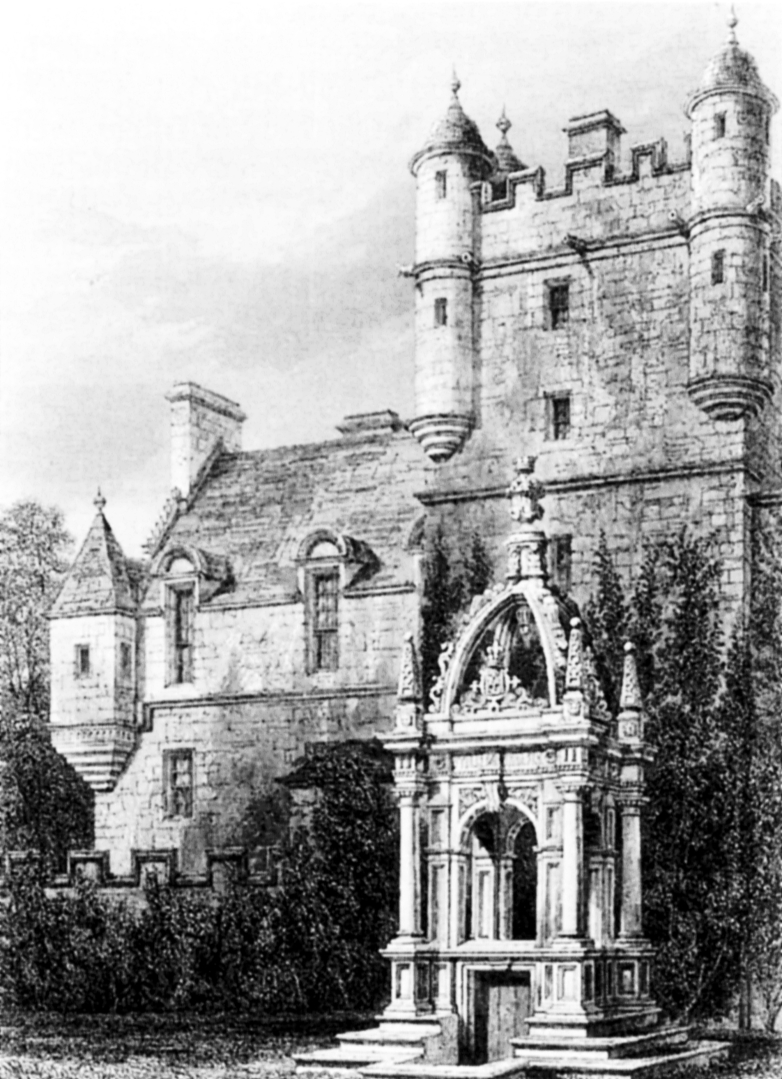 The interior has been largely modernised, but the basement is vaulted, and a wide turnpike stair climbs as far as the second floor. A long gallery has a fine painted wood ceiling with decorations and inscriptions, and there are also many good plaster ceilings. Two other rooms were also found to have paintings during building work in 1953, and part of one is now on display in the Museum of Edinburgh (Huntly House).
There is a rectangular doocot [NT 351729] with 1087 nesting boxes and dating from early in the 17th century. 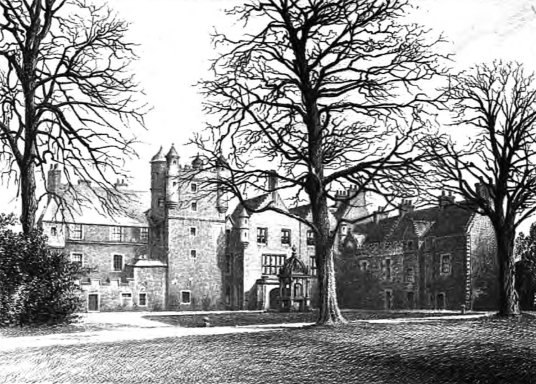 Pinkie is not marked on Blaeu’s map of The Lothians, but is on Adair’s map of Midlothian, when it is depicted in enclosed and wooded policies.
Pinkie was a property of the Abbey of Dunfermline, who are said to have had a hunting lodge here, but passed, after the Reformation, to the Setons. Alexander Seton, son of George Seton, 5th Lord Seton, was 1st Earl of Dunfermline, Lord Fyvie and Chancellor to James VI. He altered the house in 1613, and died here in 1622 and is buried at Dalgety. 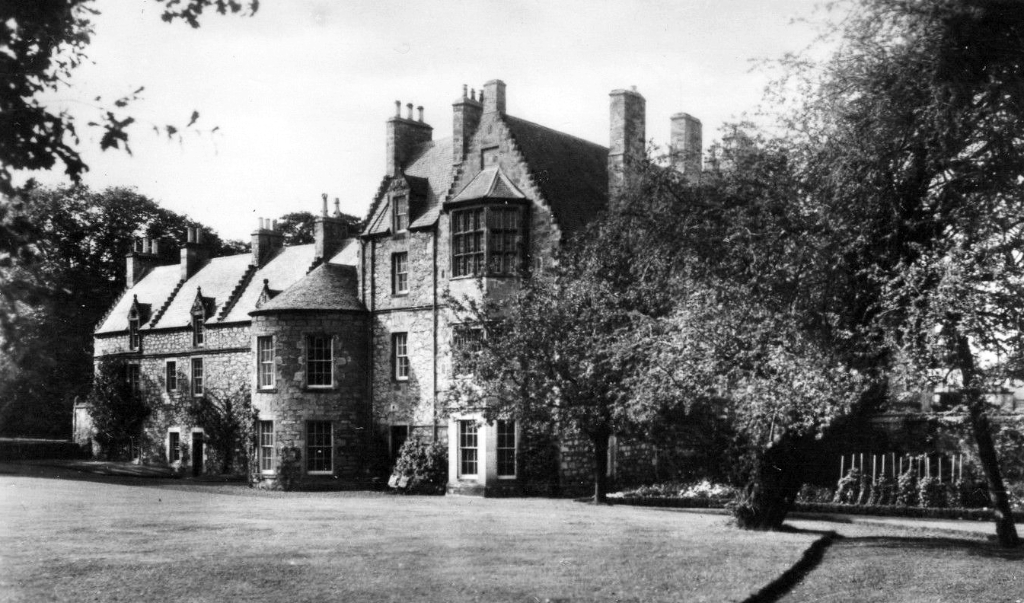 Charles Seton, Earl of Dunfermline, had a ratification of 1644 which mentions the manor place and fortalice of Pinkie. The Setons were forfeited in 1690 because of their support for James VII. Charles I had stayed here, as did Bonnie Prince Charlie following victory over Sir John Cope and his army at Prestonpans in 1745 during the Jacobite Rising, and the Long Gallery was used to treat wounded troops. The property was sold to the Hay Marquis of Tweeddale in 1694, then in 1788 to the Hopes of Craighall. The house was sold again in 1951 and is part of Loretto, a private school and is used as a boarding house. 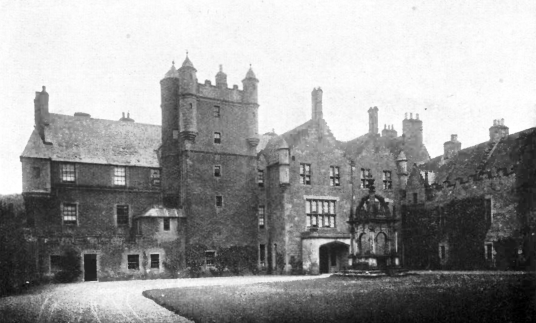 The house is said to be haunted by a ‘Green Lady’, a Green Jean. Some have identified the ghost as the bogle of Lilias Drummond, who died at Dalgety in 1601 and was the wife of Alexander Seton, but this seems unlikely (although she is associated with Fyvie Castle). The appearance of the ghost apparently bodes ill for the resident family, and is said to be sometimes be accompanied by a child. Another identification has been suggested as a Lady Jane or Jean Seton, possibly the daughter of George, 3rd Earl of Winton, who died un-wed in 1636 and is said to have murdered her child. A portrait in the house is said to show the lady, clad in a green frock, and with a child. There are, however, many ‘Green Jeans’ in Scotland’s castles, ‘Green Lady’ ghosts called Jean, so the name may be misleading…
Another tale is that an underground passage connected the house with Falside Castle, which would be a feat of subterranean engineering.