Lothians: About 2 miles north-west of Bonnyrigg, on minor road south of B704 between A6094 and A7, on west bank of South Esk, at Dalhousie Castle. 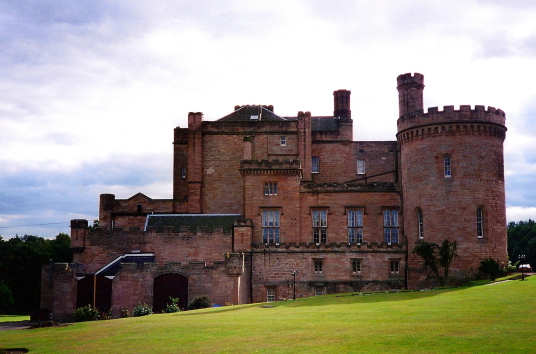 Set in wooded parkland, Dalhousie Castle, a large and rambling baronial mansion, incorporates an altered 16th-century L-plan tower house, within a 13th-century courtyard with corner towers and a moat, traces of which remain. The main entrance, through a tall archway, is crowned by two bartizans, and a large round tower survives, at one corner, from the courtyard. In the 17th century the castle was extended, and further substantial internal alterations were made by William Burn in 1820. The slots for the drawbridge survive, as does a bottle dungeon and the basement is vaulted. 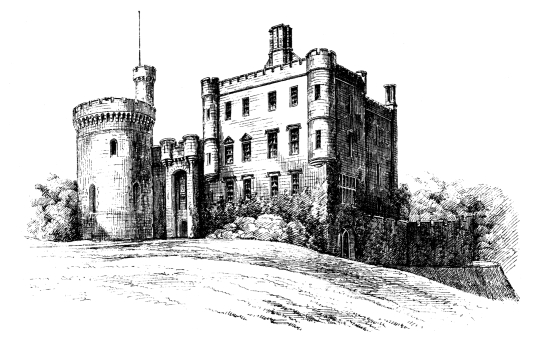 ‘Dalhousy’ is marked prominently on Blaeu’s map of The Lothians, and then on Adair’s map of Midlothian, where it is depicted as a castle in large enclosed and wooded policies. 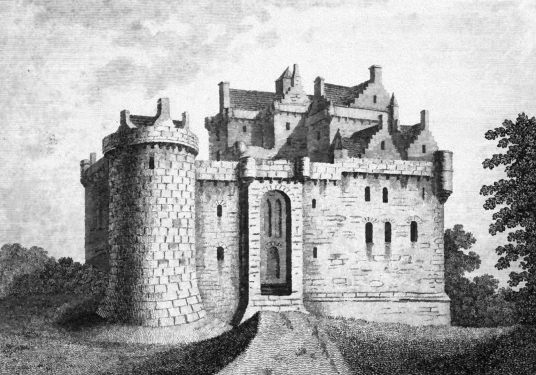 The property belonged to the Ramsays from the 13th century, and William Ramsay of Dalhousie added his seal to both the Ragman Roll of 1296 and the Declaration of Arbroath in 1320. Sir Alexander Ramsay was active for the Scots against the English during the Wars of Independence. However, he was starved to death by the Douglases in Hermitage Castle in 1342 after he was made Sheriff of Teviotdale, an office the Douglases coveted. William Ramsay, his brother, was captured at the Battle of Neville’s Cross in 1346. 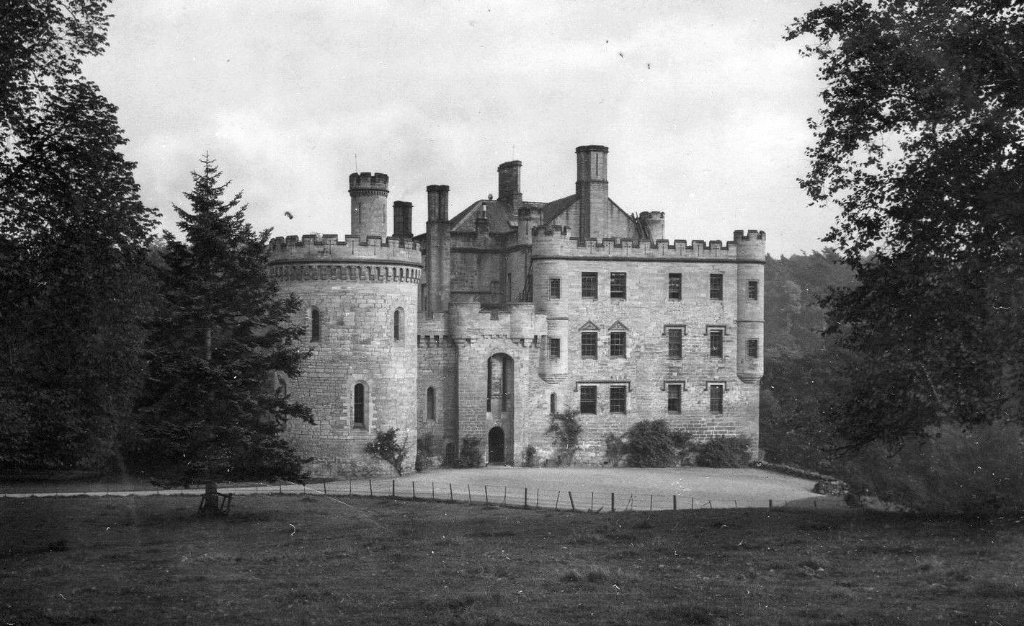 In 1400 the castle was held successfully against Henry IV of England, but Sir Alexander Ramsay of Dalhousie was killed at the Battle of Homildon Hill in 1402, as was another Alexander at the Battle of Flodden in 1513. In 1567 George Ramsay, laird of Dalhousie, had a ratification for the barony of Dalhousie, with the castle, tower, fortalice, yards, orchards, mains, woods, parks, etc. The family supported Mary, Queen of Scots, and fought for her at Langside in 1568. In 1633 William Ramsay was created the 1st Earl of Dalhousie, and had the house much extended and remodelled. He fought at Marston Moor against the king in 1644, and then was in the force that defeated Montrose the following year. Cromwell besieged and captured the castle in the 1650s. Many of the later Earls were soldiers and fought in foreign wars and parts of the Empire. 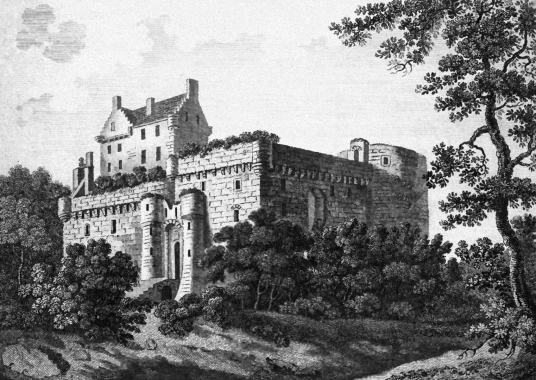 The Ramsays lived at the castle until about 1900, then moved to Brechin Castle. The castle was used as a school from 1925-50, but since 1974 has been a hotel.
The old parish church at Cockpen [NT 327633] is ruinous but dates from the 13th century with later modifications, and was consolidated in the 1990s. The Ramsays of Dalhousie had a burial aisle here.
Dalhousie Grange [NT 318640] was used as a dower house.
The castle is said to be haunted by a ‘Grey Lady’, an apparition of a Lady Catherine. One version of the story is that she was the mistress of one of the Ramsay lairds, but his vengeful wife had her locked up in one of the castle turrets. Another that she was his daughter and fell in love with the wrong man, was imprisoned in one of the chambers, and there starved to death.
Other stories are of the ghost of one of the pupils, from when the castle was a school, who fell from the top of the building, while a third spirit is alleged to be that of a dog.