Site of castle, which was completely demolished in 1833. It is marked on Pont’s map and is depicted as a massive tower, rising to four or five storeys, with bartizans or turrets and a walled courtyard. It appears to be in a wooded park.
Tullibardine was a property of the Murrays from 1284, and Andrew Murray of Tullibardine supported Edward Balliol, playing an important part in ensuring victory at Dupplin Moor. He was executed for treason in 1332. Sir William, son of the then laird another Sir William, was slain at Flodden in 1513. Sir John Murray was Comptroller to James VI and was made Earl of Tullibardine in 1606, while his son, William, had been one of those who were present at the Gowrie Conspiracy at Perth in 1660 and saved the king’s life. The Murrays were made Marquises in 1676, while another branch became Earls and then Dukes of Atholl in 1703 (see Blair Castle). William Murray, Marquis of Tullibardine, fought in the 1715 and 1719 Jacobite Risings, and then was also out for Bonnie Prince Charlie. He was caught following the Battle of Culloden in 1746 and died in captivity in the Tower of London. Tullibardine Castle was dismantled in 1747, and was then completely demolished in the 1830s. 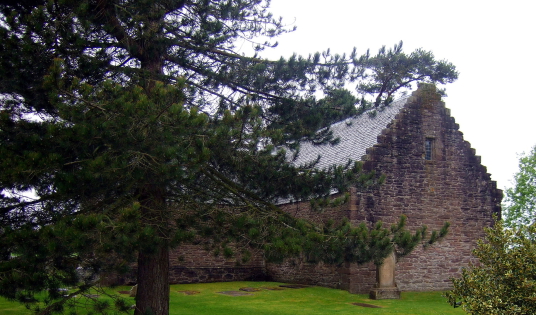 The nearby cruciform chapel, was founded by Sir David Murray of Tullibardine in 1446, and has been used as a burial place by the Murrays since the Reformation.