Dunvegan Castle, a large and impressive castle and mansion, stands in a pretty spot to the north of the island of Skye in the Hebrides of Scotland and has long been the seat of the MacLeods of Dunvegan. 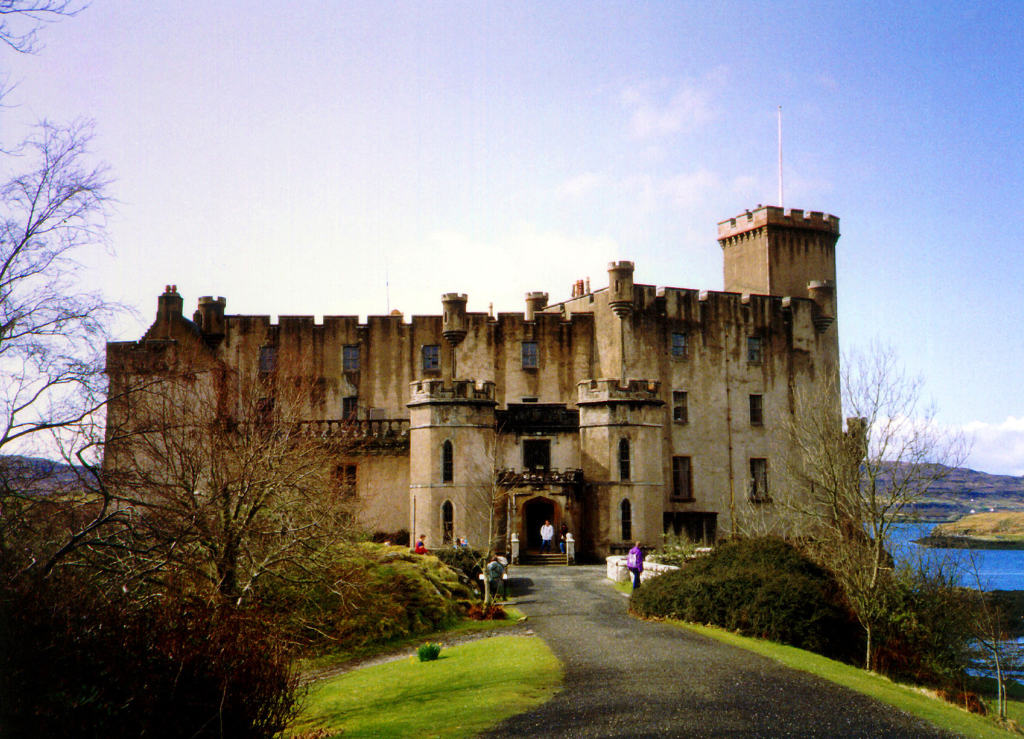 South Highland: About 1 mile north of the village of Dunvegan on island of Skye, on minor road north of A850, east shore of Loch Dunvegan, at Dunvegan Castle. 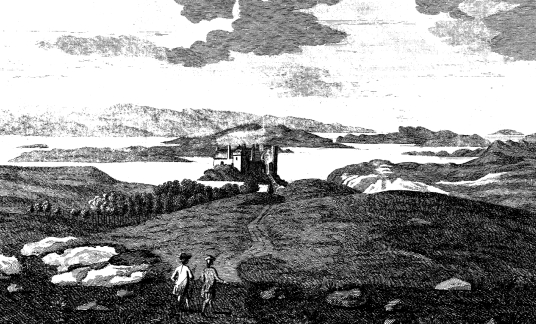 On what was once an island in Loch Dunvegan, Dunvegan Castle consists of a massive 14th-century tower, a 16th-century tower known as the Fairy Tower, which was built by Alasdair Crotach, whose fine tomb is at St Clement’s Church [NG 047833] at Rodel Church on Harris, and a joining hall block from the 17th century, as well as a later wing. 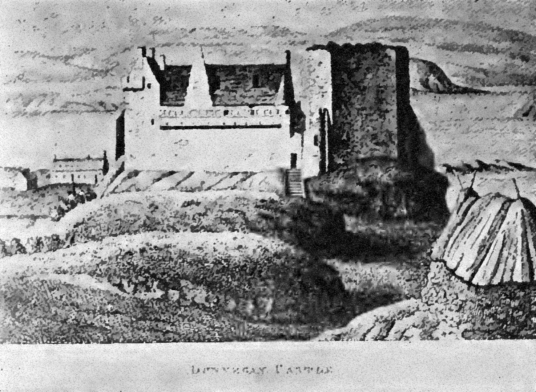 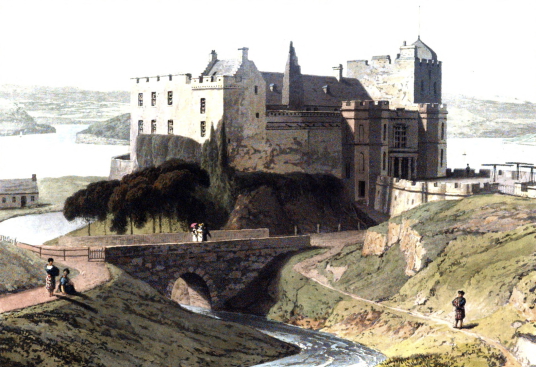 The castle was completely restored in 1840-50, and given ornamental turrets and battlements in the 19th century. It was repaired after a fire in 1938-40.
‘Dun vegen’ is marked on Blaeu’s map of Skye and is depicted as a tower. 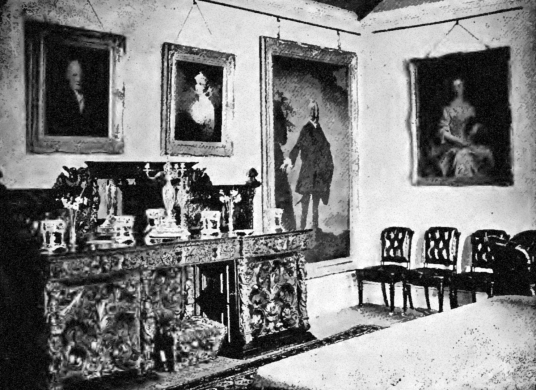 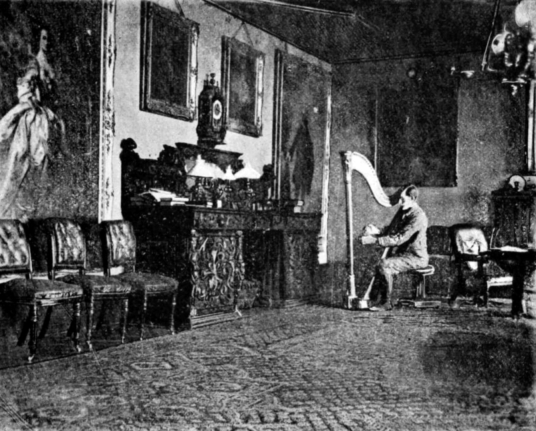 The castle has been continuously occupied by the chiefs of MacLeod since 1270, who trace their ancestry back to Leod, a son of Olaf the Black, Viking King of the Isle of Man. The MacLeods supported Robert the Bruce in the Wars of Independence, and they fought at the bloody battle of Harlaw in 1411. Dunvegan was visited by James V in 1540, and the king was reputedly entertained on the top of MacLeod’s Tables, flat-topped hills, which dominate that part of Skye. 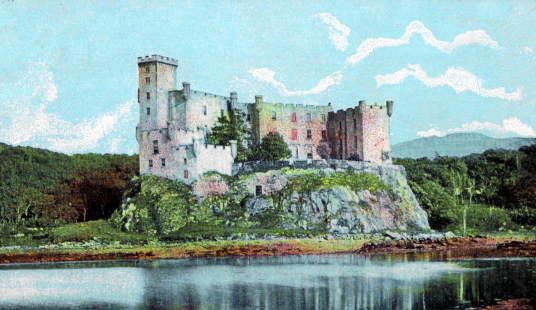 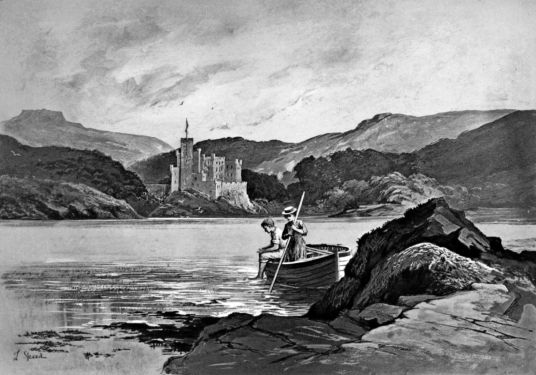 The MacLeods fought at the Battle of Worcester for Charles II but lost 500 men, which made them reluctant to take part in the Jacobite Rising. In fact MacLeod of Dunvegan refused to join Bonnie Prince Charlie unless he had significant French help, which was perhaps wise, and the MacLeods did not take part in the Rising. The castle is still owned by the 29th Chief of MacLeod. 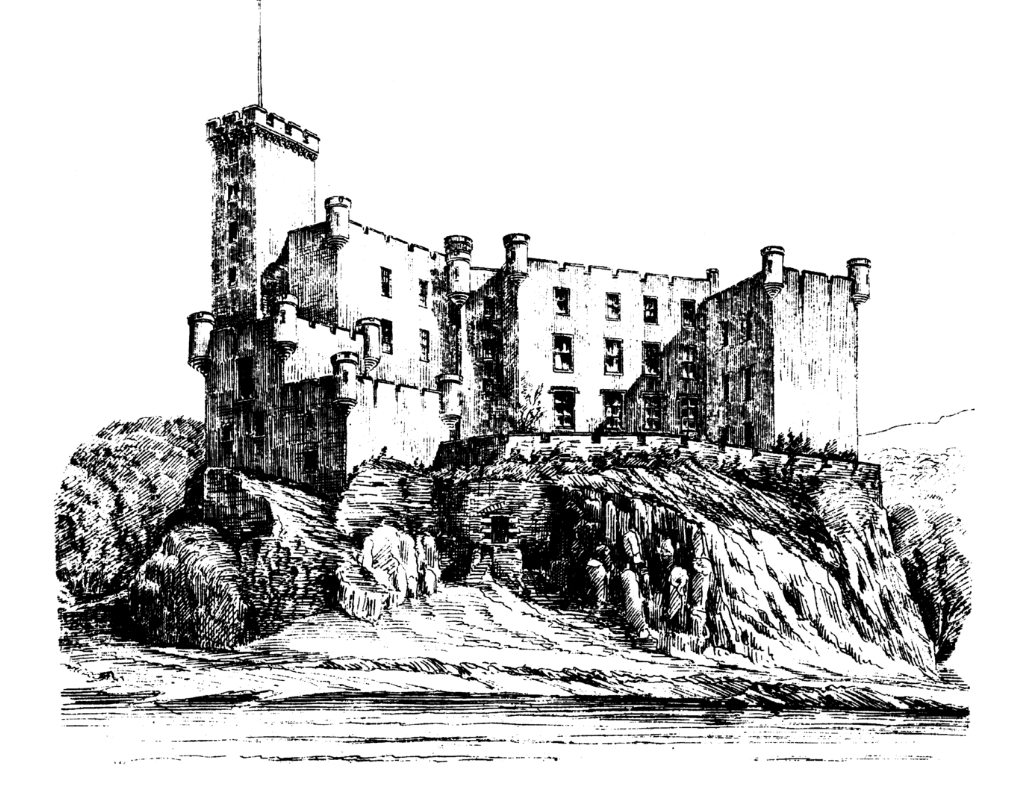 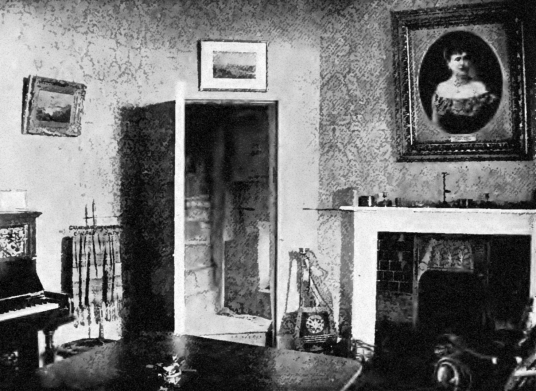 Dunvegan is the home to the famous Fairy Flag, Am Bratach Sith in Gaelic. There are many legends surrounding this piece of silk, which is now reduced in size (from pieces being removed and kept for luck) and somewhat threadbare. One is that it was given to one of the chiefs by his fairy wife at their parting. This is said to have taken place at the Fairy Bridge [NO 278514], three miles to the north east, at a meeting of rivers and roads. The chief had married his wife thinking she was a mortal woman, but she was only permitted to stay with him for 20 years before returning to Fairyland. 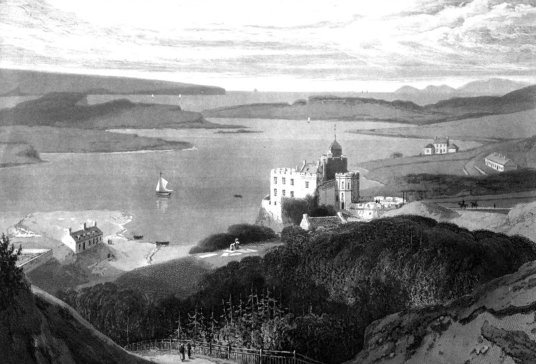 The flag, however, originates from the Middle East, and it has been dated between 400 and 700 AD, predating the castle by hundreds of years. The flag is believed to give victory to the clan whenever unfurled, and reputedly did so at the battles of Glendale in 1490 and Trumpan in 1580. 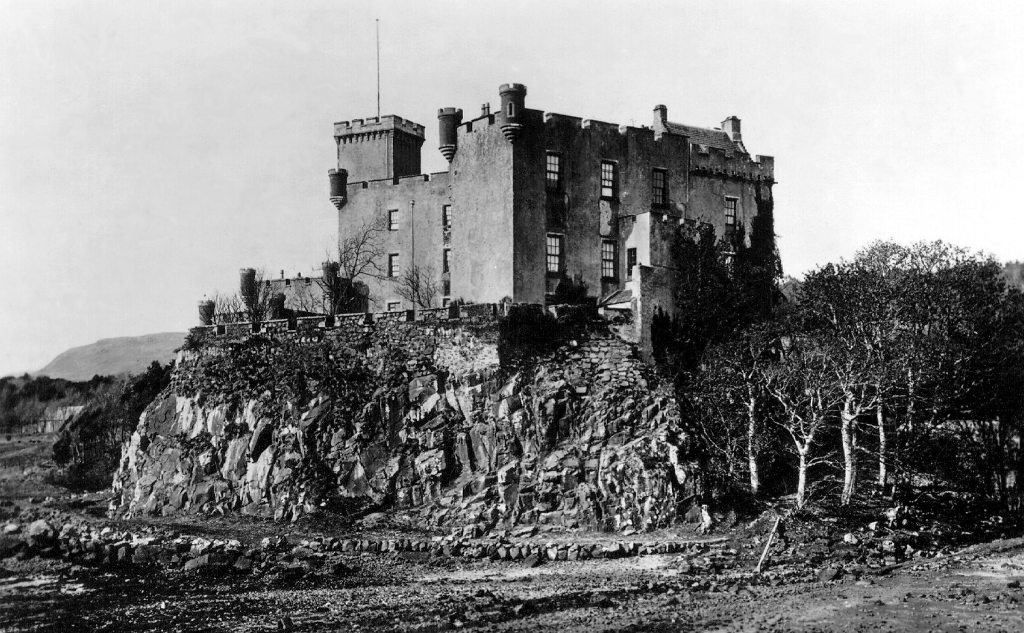 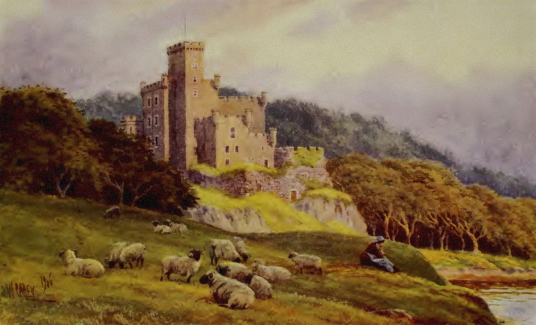 The Fairy Flag was also believed to make the marriage of the MacLeods fruitful, when draped on the wedding bed, and to charm the herrings out of Dunvegan Loch when unfurled. Belief in its power was such that during World War II pilots from the clan carried a picture of the flag as a talisman. 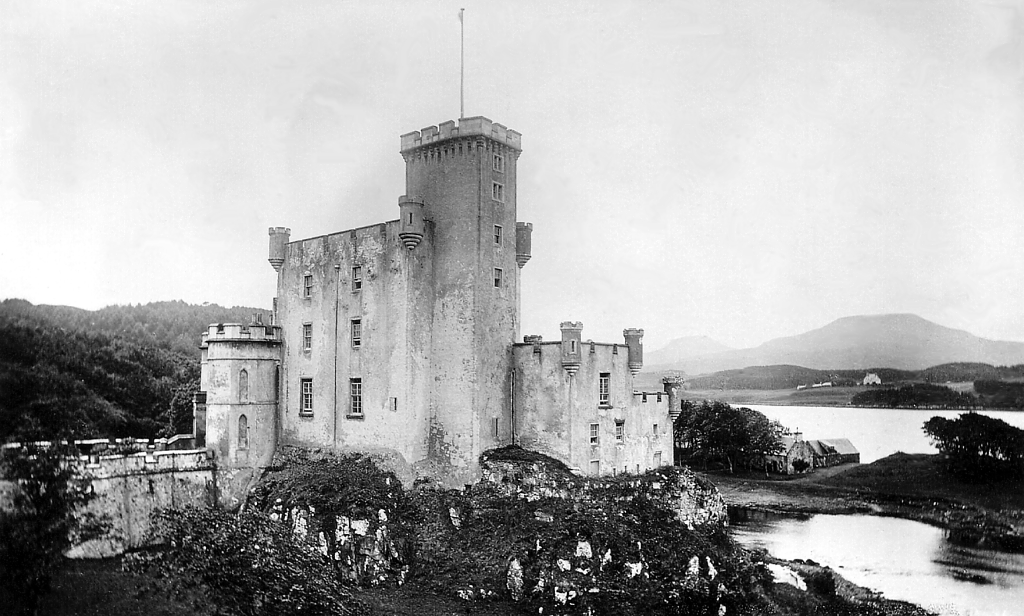 Other interesting items at Dunvegan include a drinking horn called Rory Mor’s Horn, holding several pints of claret, which the heir of the MacLeods had to empty in one go; and the Dunvegan Cup, gifted to the clan by the O’Neils of Ulster in 1596. There are also mementoes of Bonnie Prince Charlie and Flora MacDonald, and information about St Kilda, which was formerly a property of the family. 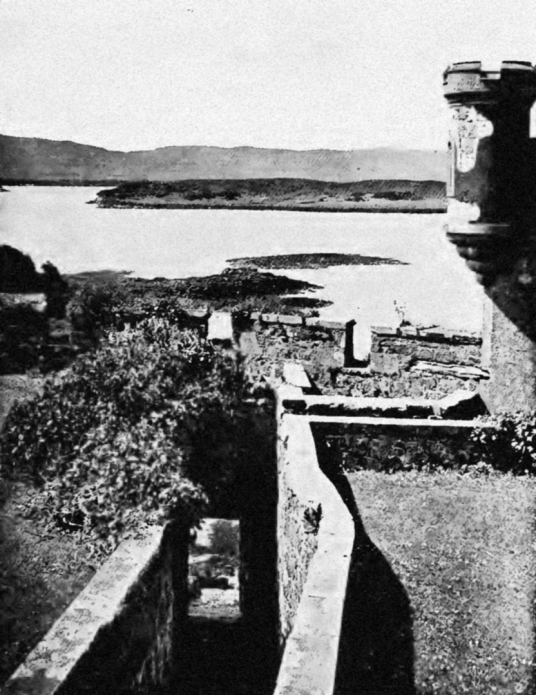 At Borreraig [NO 192536] there was a college of piping of the MacCrimmons, renowned pipers to the MacLeod chiefs. 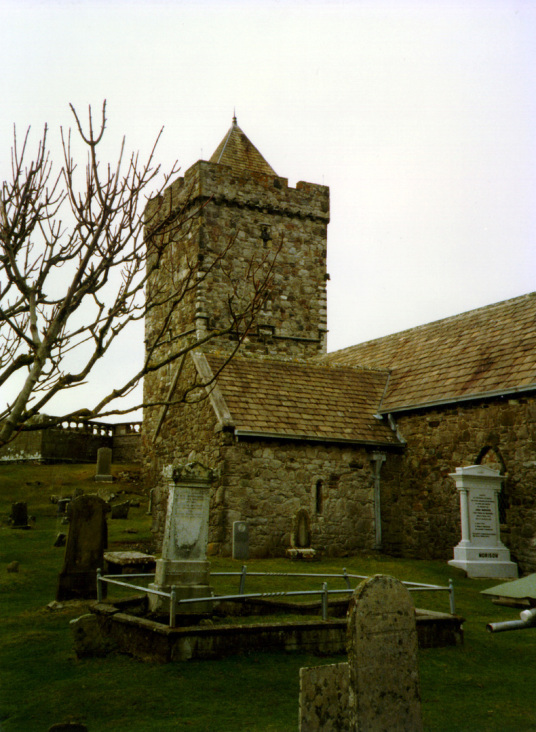 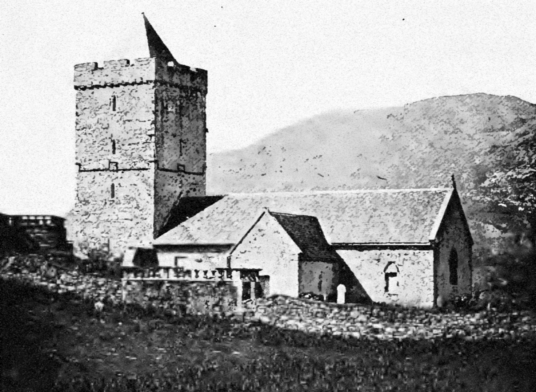 The clan also owned the Isle of Harris at one time, and at Rodel to the south of the island is St Clement’s Church, a fine building with an impressive tower. Several old carvings decorate the tower, one a Sheila na Gig, a suggestive female fertility symbol, also found on the nunnery on Iona. The church was dedicated to St Clement, a thirteenth-century bishop of Dunblane on the mainland, and was restored in 1787 and 1873. 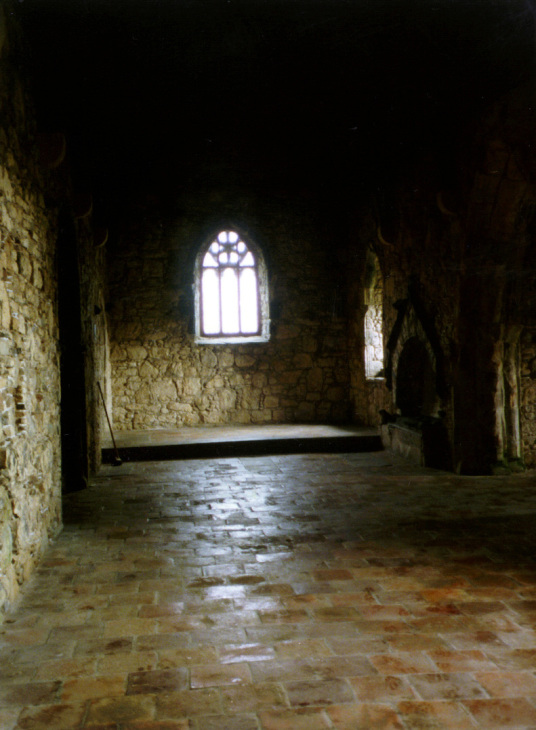 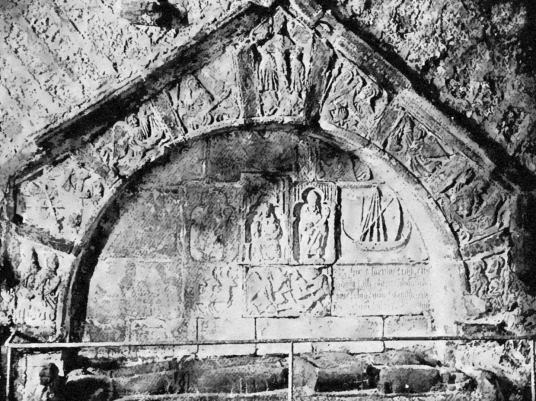 Inside is the splendid carved tomb and stone effigy of Alasdair Crotach MacLeod, who owned Harris and built the ‘Fairy Tower’ of Dunvegan Castle on Skye. The inscription reads ‘the tomb was prepared by Lord Alexander, son of Willie-lmus MacLeod, lord of Dunvegan, in the year of Our Lord 1528’ (twenty years before he died). Others of the family were interred here, and another stone effigy dates from 1539. There are also carved slabs and a ring-headed cross, and interesting memorials in the burial ground. In the church is also reputedly buried the bard Mairi nighean Alasdair Ruaidh, who was interred face-down, said to be the fate of all female bards. 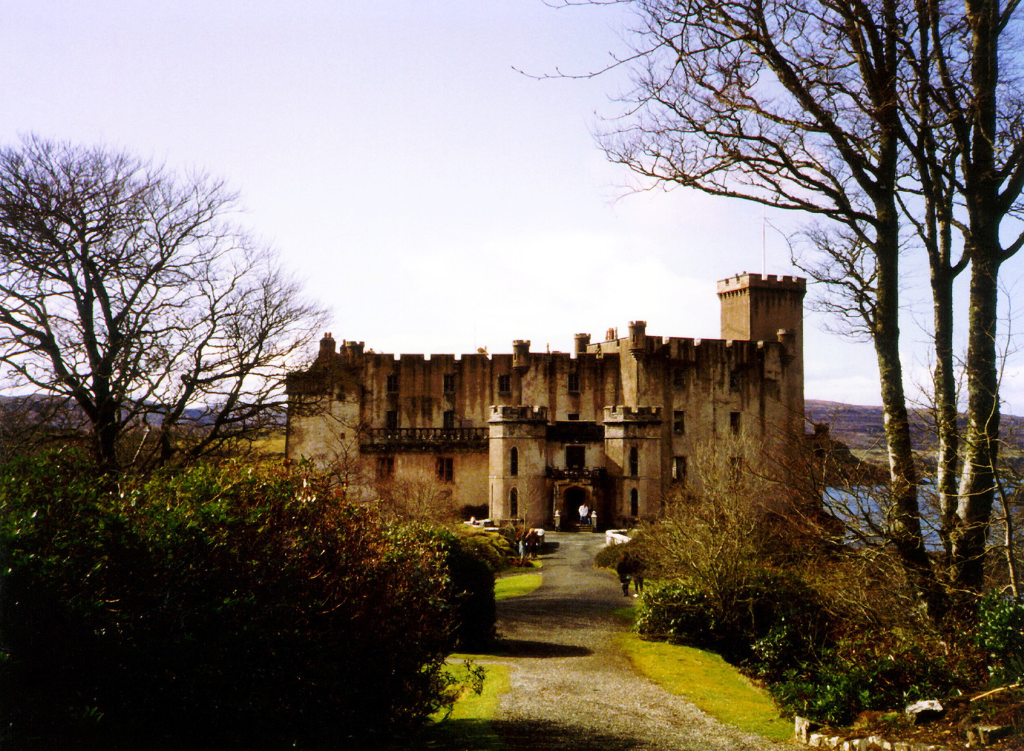 The castle was used as a location in the 1986 movie Highlander with Christopher Lambert and the 2008 film Made of Honour, starring Patrick Dempsey and Michelle Monaghan.