Drumlanrig Castle is a magnificent old baronial mansion with a fascinating interior, in expansive lovely parkland and gardens nestling in the hills of Nithsdale, long held by the Douglases then by the Scott Dukes of Buccleuch, located near Thornhill in Dumfries and Galloway. 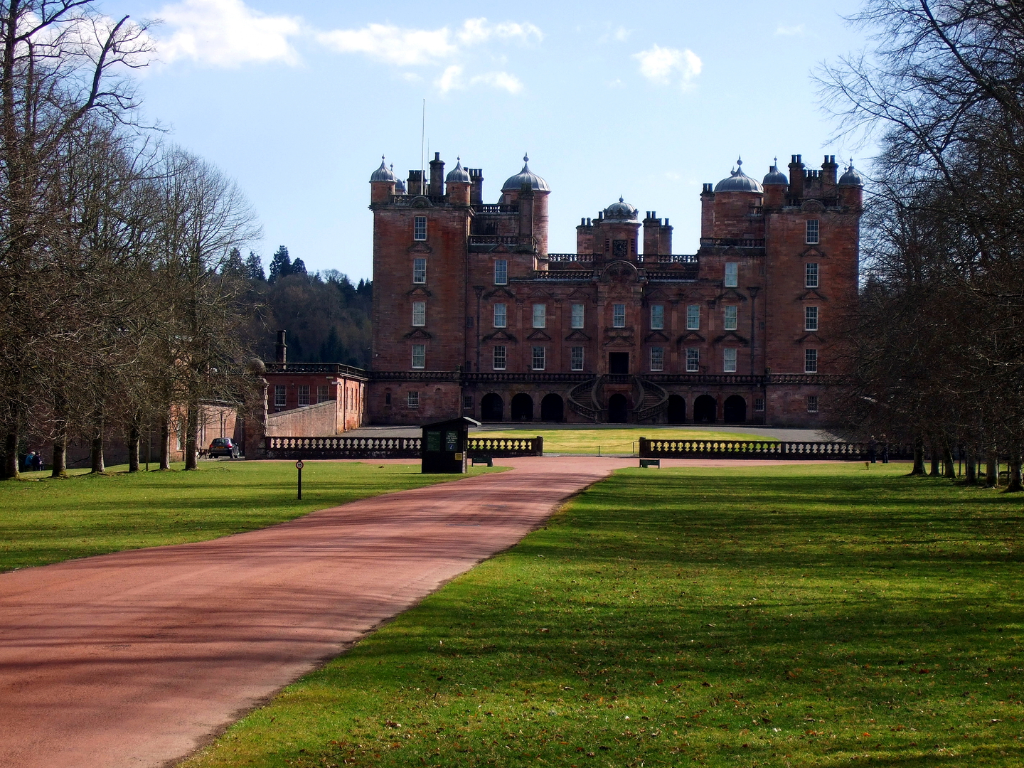 Dumfriesshire: About 3 miles north and west of Thornhill, on minor roads west of A76, just west of River Nith, at Drumlanrig. 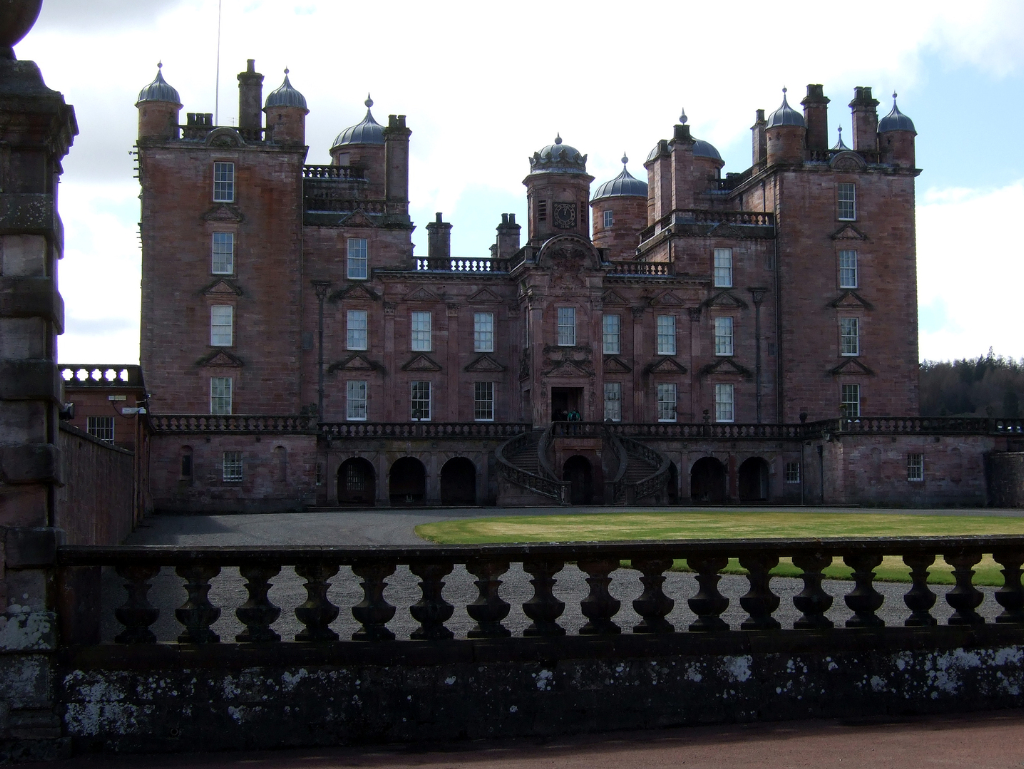 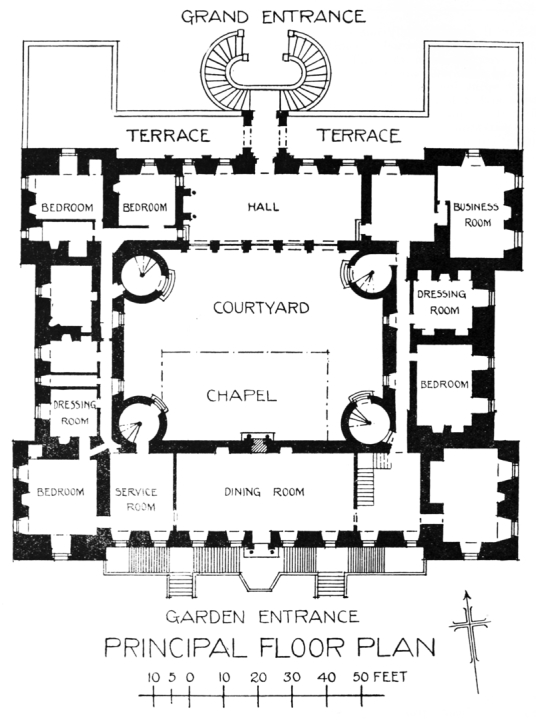 Set in a prominent position in lovely parkland and wooded grounds, Drumlanrig (the 'pink palace') is a very impressive Scottish baronial mansion house, which dates from the 17th century. The remains of a 14th-century castle, including cellars, are incorporated into the building. The castle consists of four ranges around a courtyard, with higher rectangular towers at the corners and stair-towers within the courtyard. The towers have pepper-pot turrets. 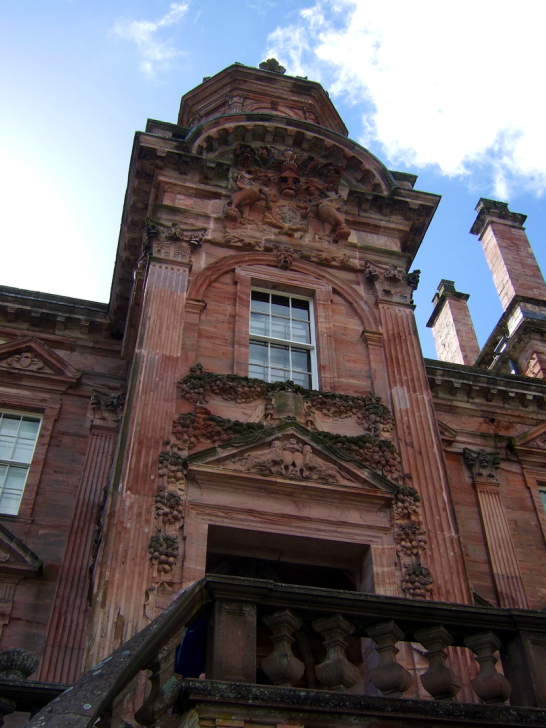 ‘Drumlainrig Castell’ is marked as a large building on Pont’s map of Nithsdale in its own park. 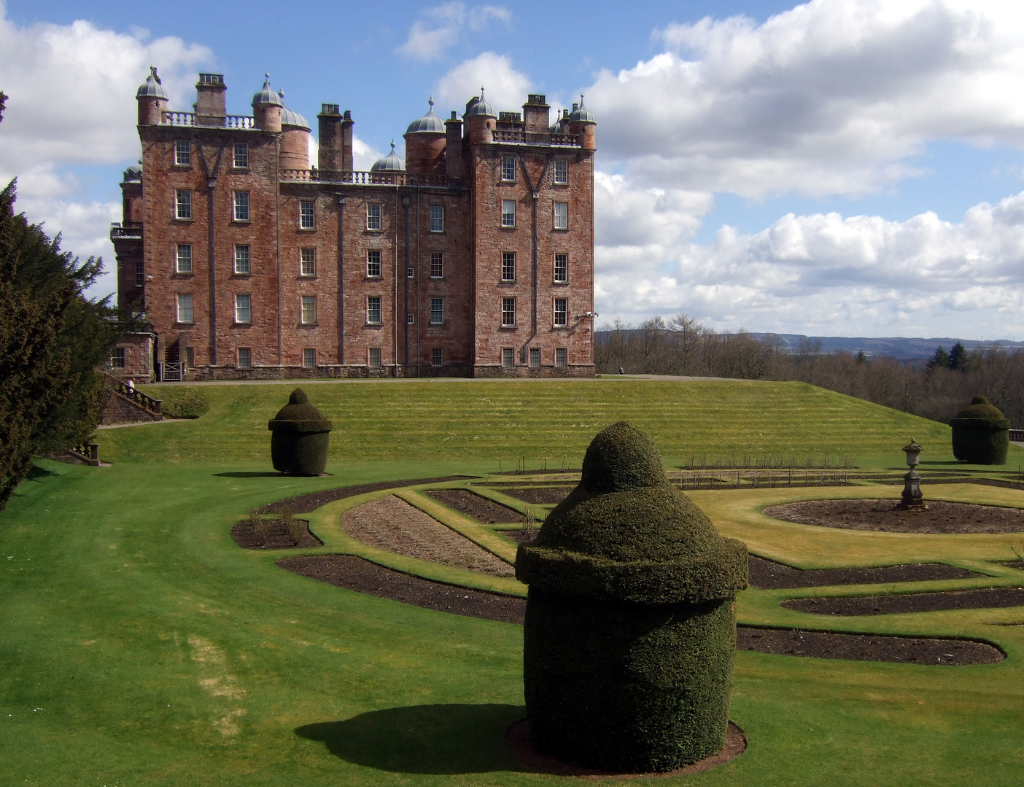 In the middle of the 14th century the barony of Drumlanrig was held by the Earls of Mar. James Douglas, 2nd Earl of Douglas and Mar, died at the Battle of Otterburn in 1388, and the property passed to William Douglas, his son. 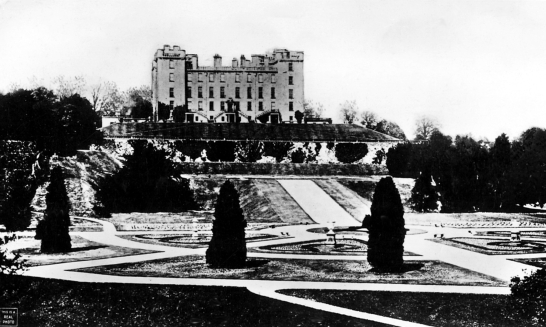 The original castle was built by the Douglases after 1357, and was sacked by the English in 1549. It was destroyed in 1575 because the family supported Mary, Queen of Scots, who had stayed here in 1563. It was restored or rebuilt as James VI stayed here in 1617, by when it was a courtyard design. Drumlanrig was occupied by a Cromwellian force in 1650. 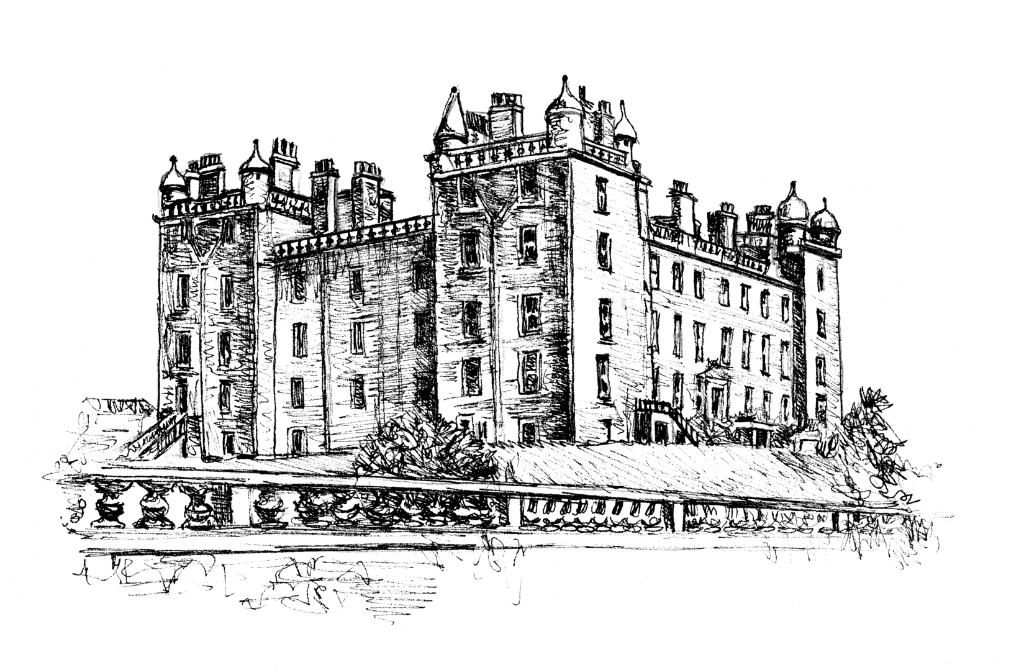 The new castle was built between 1679 and 1691 by William Douglas, 3rd Earl of Queensberry, who was made Duke in 1684. The Duke, however, spent only one night in his splendid new mansion, decided he did not like it, and moved back to Sanquhar Castle, where he died in 1695. His son, James, 2nd Duke, transferred his seat to Drumlanrig, and Sanquhar  was left to decay. 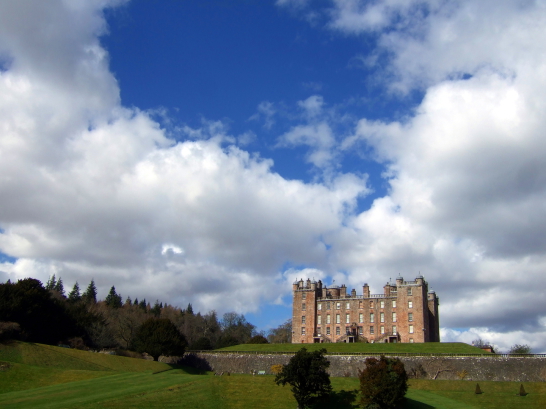 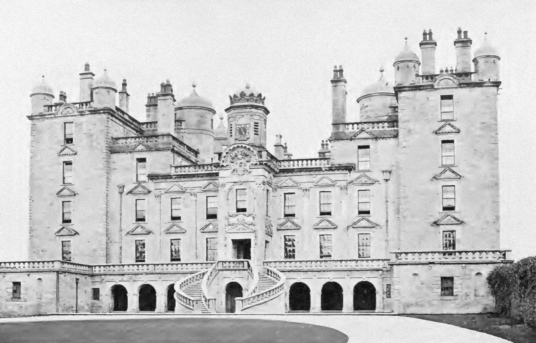 Bonnie Prince Charlie stayed at the castle in 1745 after his retreat from Derby, and his men sacked and damaged the building and slashed a painting of William of Orange. 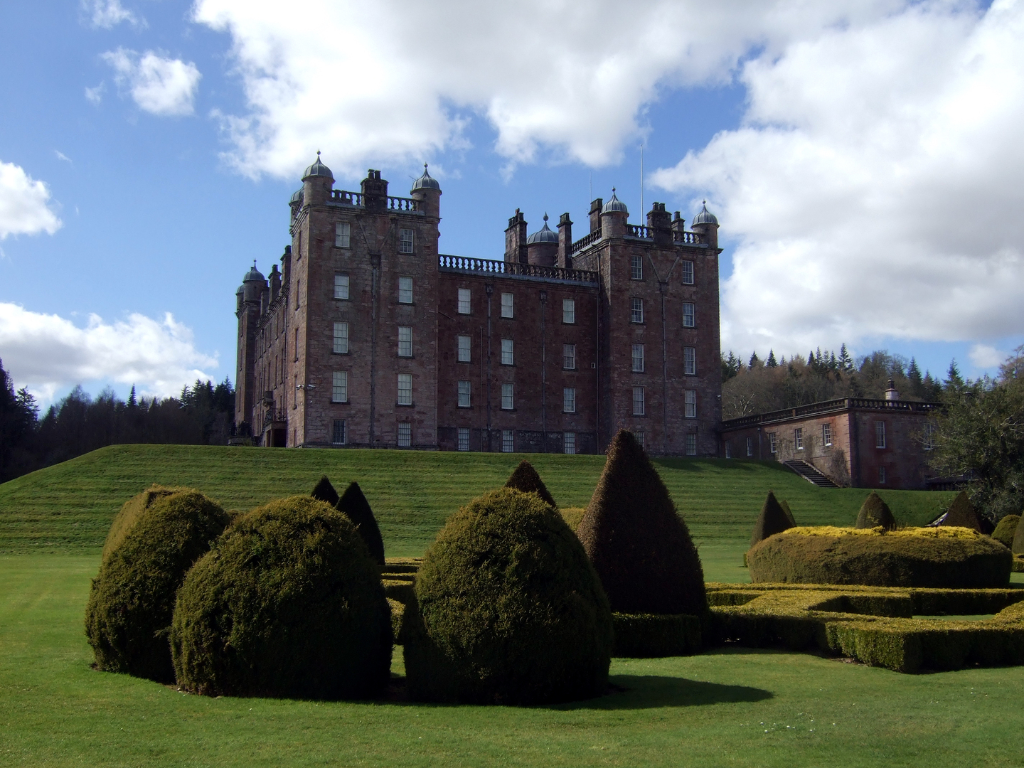 Drumlanrig passed to the Scott Dukes of Buccleuch in 1810 after the death of William, 4th Duke of Queensberry, known as Old Q, whose portrait by Allan Ramsay hangs in the drawing room. The castle was restored in 1827, and service wings were added by William Burn. There is a fine collection of pictures, including paintings by Rembrandt and Holbein, as well as many other works of art.

The castle was used as Bellhurst Manor in the Outlander TV series. 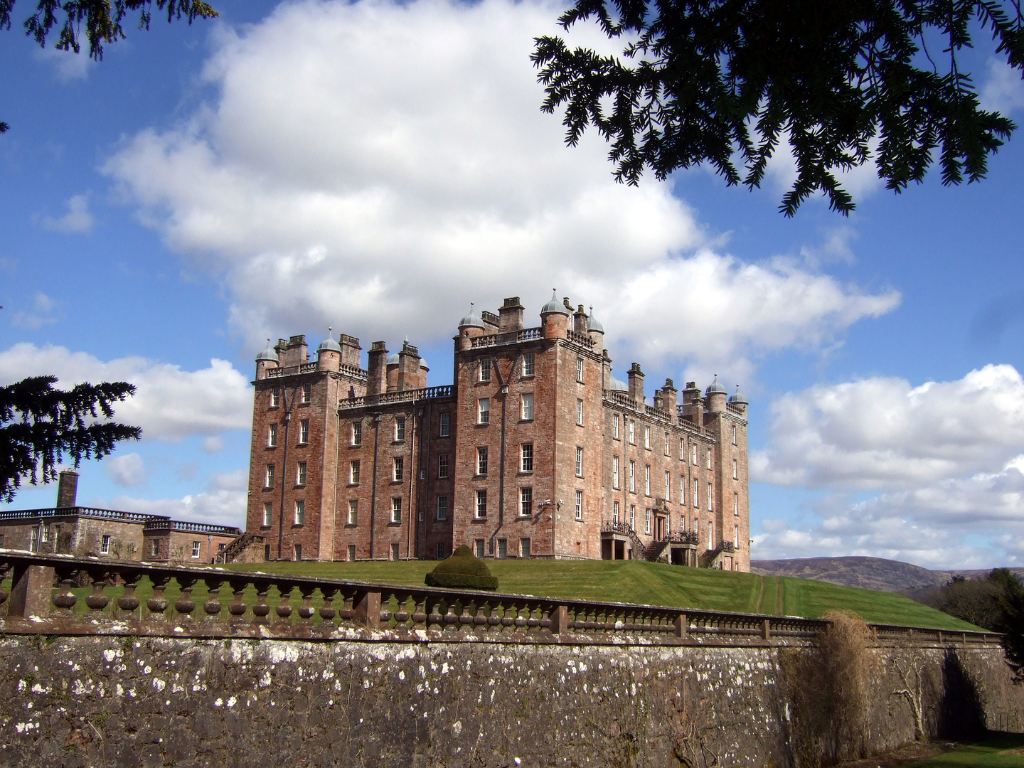 The property is still owned by the Montagu-Douglas-Scott Dukes of Buccleuch and Queensberry, along with Branxholme, Bowhill and Dalkeith Palace, and who hold many titles including Marquess of Dumfriesshire, Earl of Drumlanrig, Buccleuch, Sanquhar and Dalkeith, and Viscount Nith, Torthorwald and Ross. 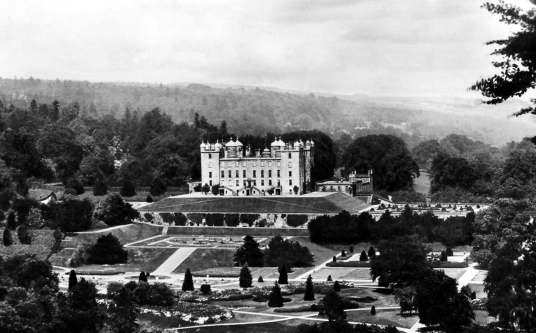 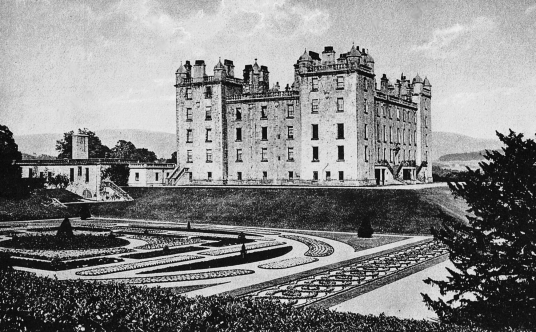 The Dukes of Queensberry have a mausoleum of 1708 at Durisdeer Parish Church [NS 893038], a large parish church which was designed by the architect James Smith and replaced an older building. The Queensberry Aisle has a baroque mural and carving in white marble, depicting cherubs, flowers, skulls, garlands of flowers and much else by the effigy of James, 2nd Duke of Queensberry. There are many old memorials in the graveyward dating from the 17th century onwards. 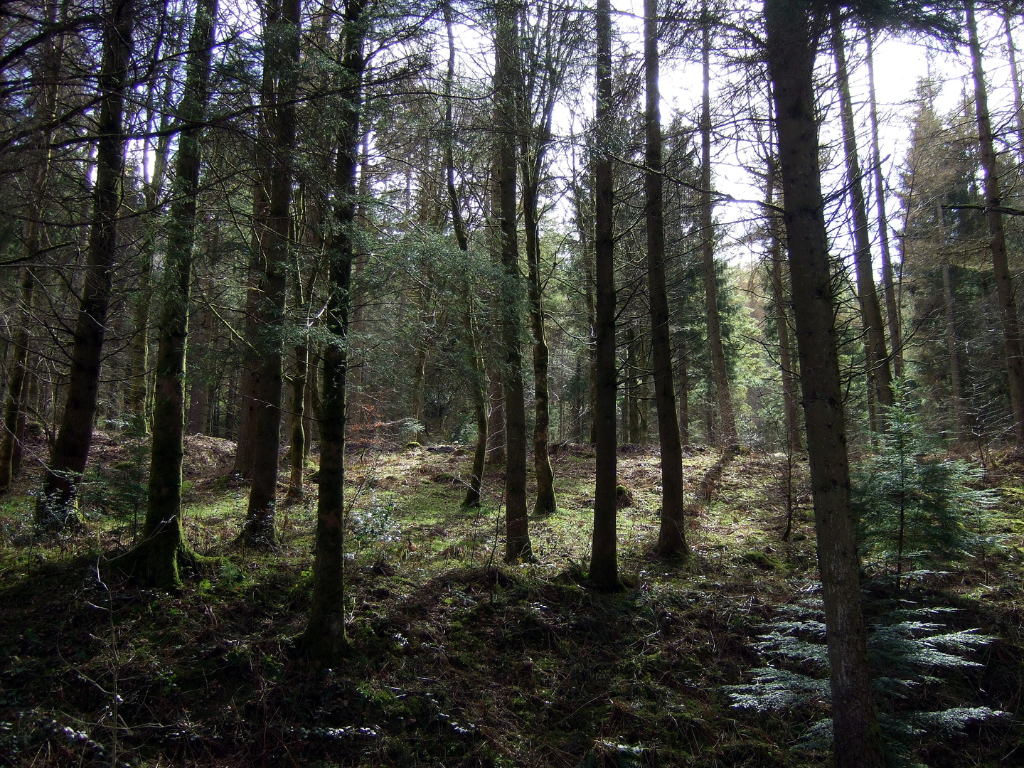 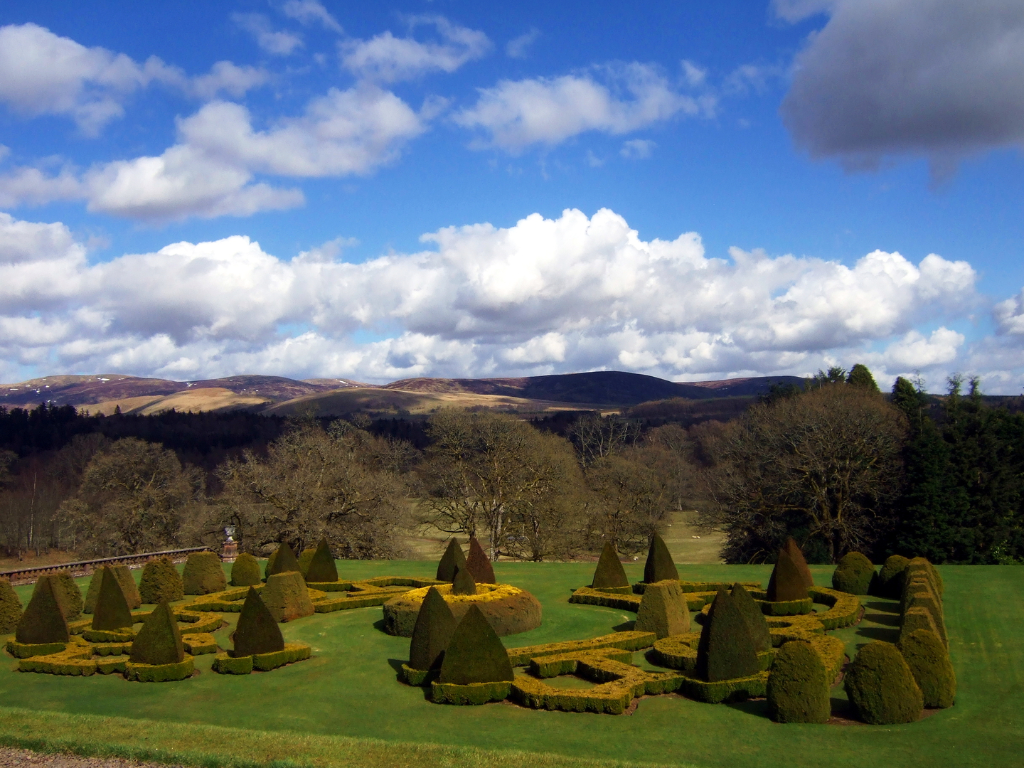 The castle is set in a beautiful spot surrounded by hills with expansive landscaped grounds and fine gardens. 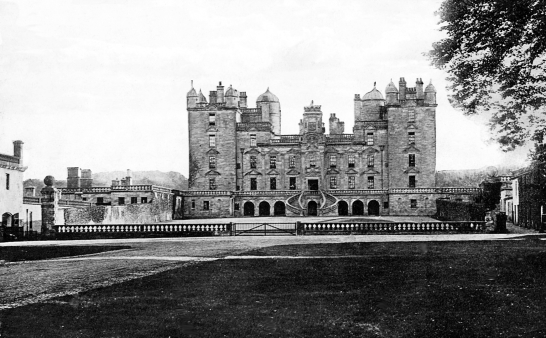 Three ghosts are said to haunt the castle. One is reputed to be the spirit of Lady Anne Douglas, seen with her head under her arm, another that of a young woman in a flowing dress, and the third of a monkey or other creature. 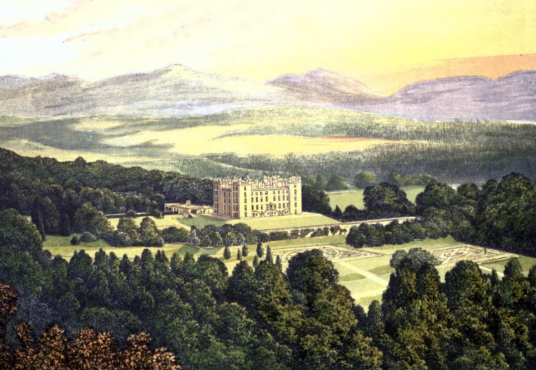 This magnificent seat of the Duke of Buccleuch is situated in the parish of Durisdeer, on a knoll of rising ground on the right bank of the river Nith, and for several miles forms an attractive feature in the rich and varied landscape of the picturesque vale through which that river flows.

The Castle is a hollow square, four stories high, surmounted with turrets at the angles. From the inner court staircases ascend at the angles in semicircular towers. On the architraves of the windows and doors is a profuse adornment of hearts and stars, the arms of the Douglases.

The main front is towards the north, but the building has also a noble appearance to the east, combining on each side the aspects of strength and beauty. The architecture is of a Gothic character. This huge castle occupied ten years in building, and was completed in 1689, the year after the Revolution. William, first Duke of Queensberry, planned and completed it, expending upon it enormous sums of money. A defaced portrait of William the Third is still a memorial of this building having been occupied by the Highlanders during their march in 1745.

Drumlanrig was the principal residence of the family of Queensberry; but on the death of Charles, the third Duke, in 1777, leaving no male issue, it passed, along with the titles attaching to the Queensberry family, to William, Earl of March, and upon the death of the latter, in 1810, it went by entail to the Duke of Buccleuch. For a considerable period the castle was unoccupied, greatly neglected, and defaced; but the succeeding proprietor, adopting it as his residence on attaining his majority in 1827, immediately commenced restoring the house and beautifying the grounds around it.

Pennant writes:—"The beauties of Drumlanrig are not confined to the highest part of the grounds; the walks for a very considerable way by the sides of the Nith, abound with most picturesque and various scenery. Below the bridge the sides are prettily wooded, but not remarkably lofty; above, the views become wildly magnificent. The river runs through a deep and rocky channel, bounded by vast wooded cliffs, which rise suddenly from its margin; and the prospect down from the summit is of a terrific depth, increased by the rolling of the black waters beneath. Two views are particularly fine: one of quick repeated but extensive meanders amidst broken sharp- pointed rocks, which often divide the river into several channels, interrupted by short and foaming rapids coloured with a moory tint; the other is of a long strait, narrowed by the sides, precipitous and wooded, approaching each other equidistant, horrible from the blackness and fury of the river, and the fiery red and black colours of the rocks, that have all the appearance of having sustained a change by the rage of another element."

From: A Series of Picturesque Views of Seats of the Noblemen and Gentlemen of Great Britain and Ireland, Volume IV (by F. O. Morris, 1880s)