On an island in the River Dee in a scenic spot, Threave Castle consists of a massive brooding ruinous tower, some 100 foot tall, built by Archibald the Grim, Earl of Douglas, in the 14th century but finally attacked and then slighted and abandoned after a siege in 1640. 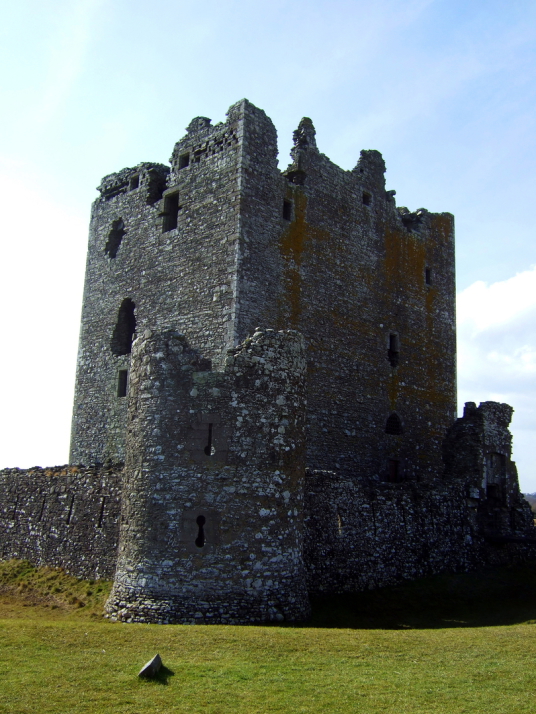 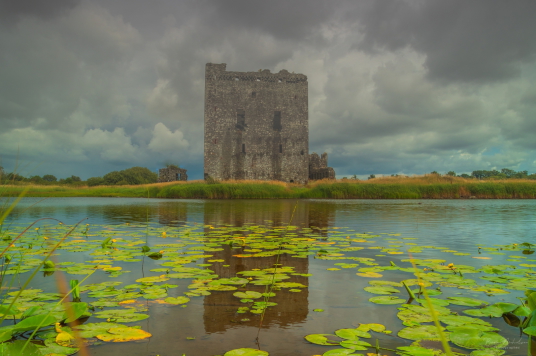 Threave Castle (many thanks and © Brian Nicholson 2921)

Galloway: About 1.5 miles west of Castle Douglas, on minor road north of A75, then foot and short boat trip to Threave Island in the River Dee. 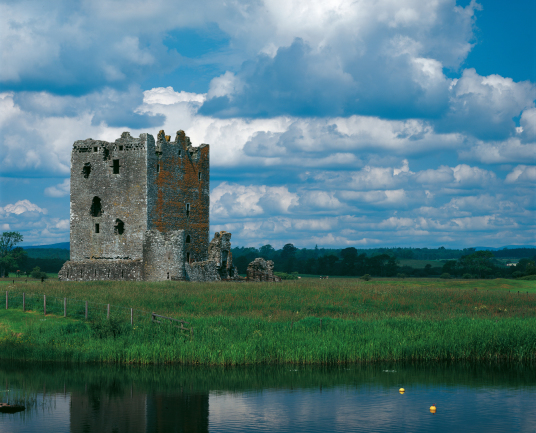 Standing on an island in the River Dee, Threave Castle consists of a massive, tall, strong and very impressive 14th-century tower, rectangular in plan, of five storeys and formerly a garret, rising about 100 foot high with walls up to 10 foot thick. The tower has few windows, and had an overhanging wooded battlement or bretasche, to protect the walls below. 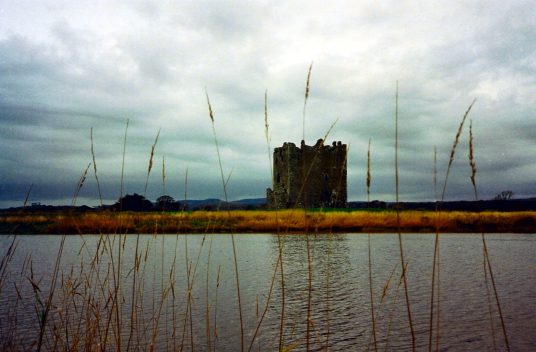 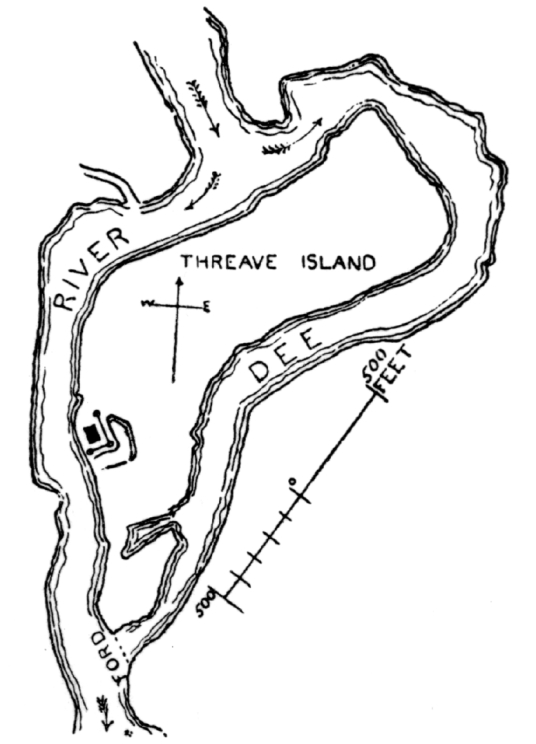 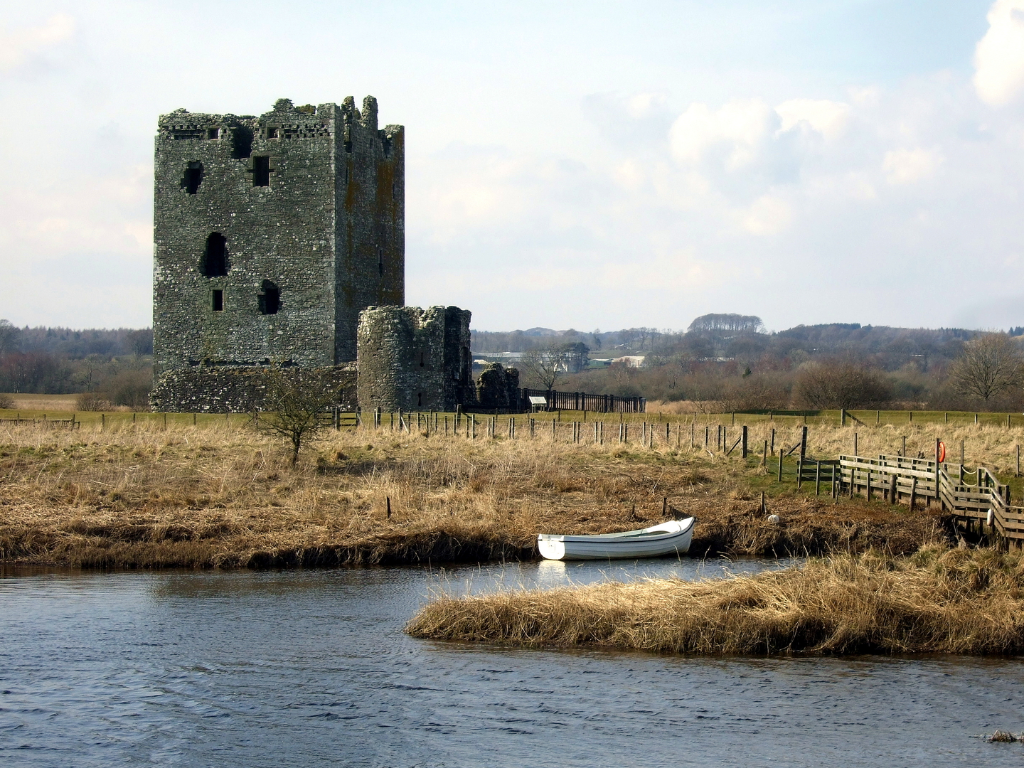 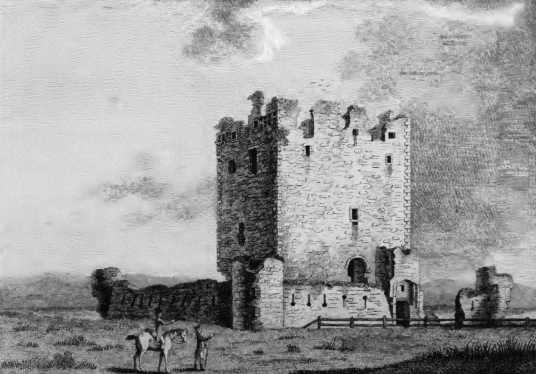 This stood within a courtyard, which was enclosed by a wall and ditch, with drum towers designed for artillery at each corner, only one of which survives. An impressive gateway remains in the curtain-wall. In the courtyard was also a hall, and there was also a harbour, but these have both gone. 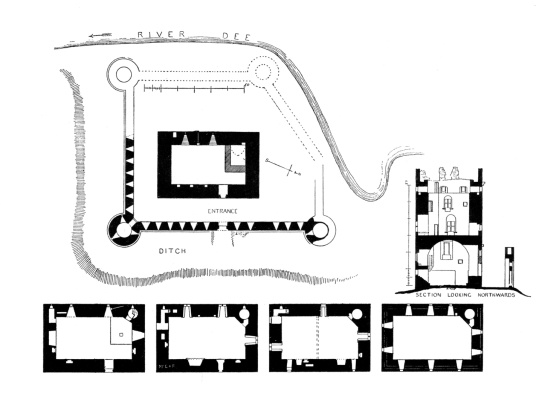 The entrance to the main tower, at entresol level, was by a bridge from the gatehouse in the curtain wall. A kitchen, with a fireplace, occupied the upper part of the vaulted basement. The chamber beneath contains a well and a deep pit-prison entered by a trapdoor.
A turnpike stair climbs up to the hall, where there was a second entrance from a bridge from the upper floor of the gatehouse and parapet wall.
‘Treef Cast.’ is marked on Blaeu’s map of the middle part of Galloway. 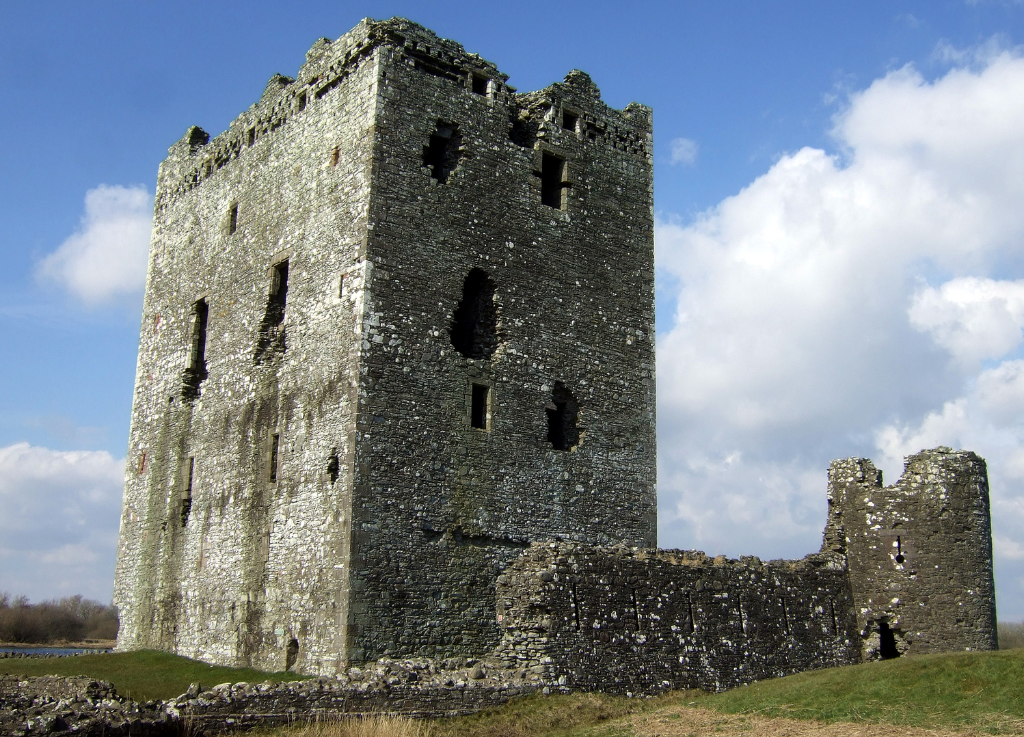 An earlier castle here was burnt by Edward Bruce in 1308. The present castle was started by Archibald the Grim – so named because his face was terrible to look upon in battle – 3rd Earl of Douglas, and Lord of Galloway from 1369 until 1390. He died at Threave in 1400 (and also see Douglas Castle). His son, Archibald, married James I’s sister and was created Duke of Touraine in France after winning the Battle of Baugé against the English. He was killed at the Battle of Verneuil in 1424. 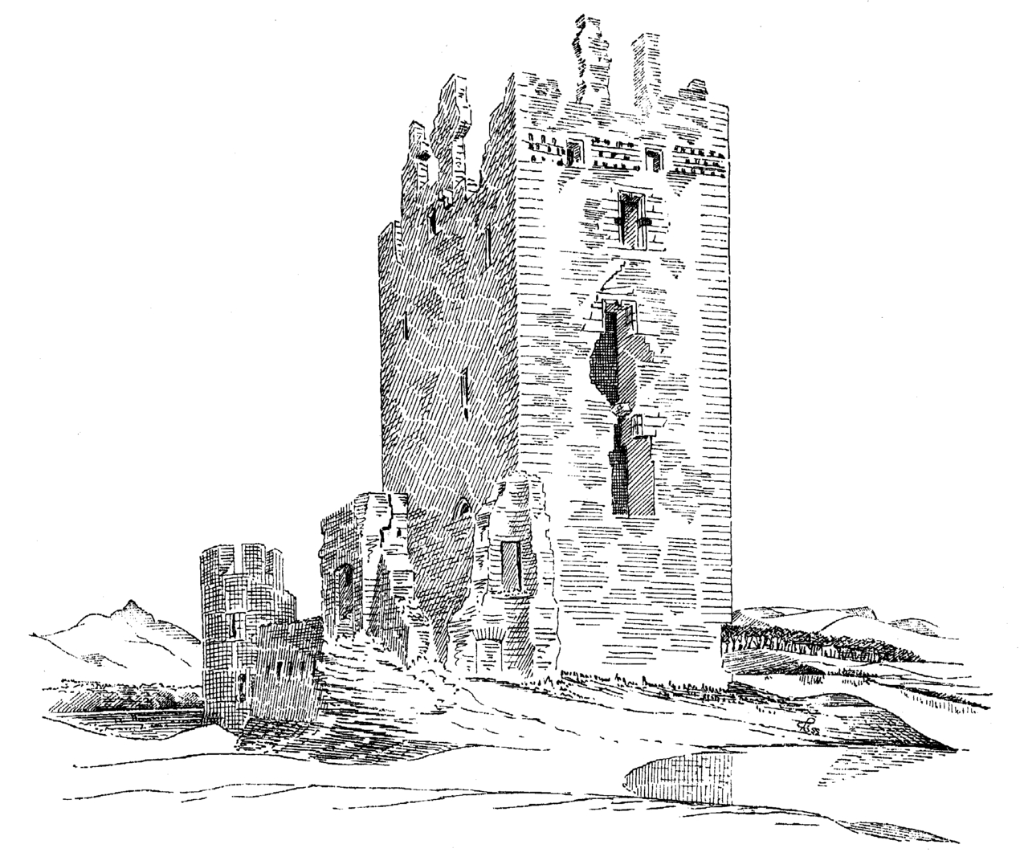 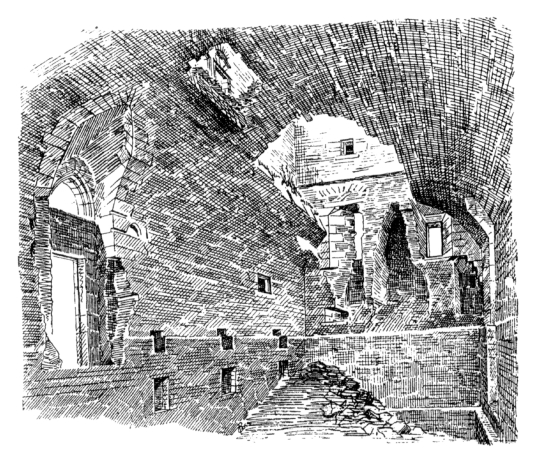 It was from Threave that William, the young 6th Earl, and David, his brother, rode to Edinburgh Castle in 1440 for the Black Dinner, where they were taken out and summarily executed, along with Sir Malcolm Fleming of Cumbernauld. 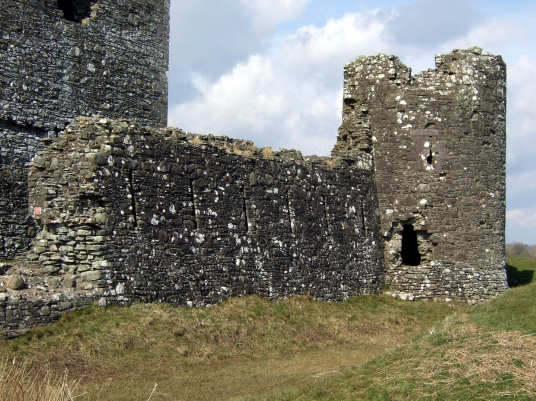 The 8th Earl, another William, was murdered in 1452 by James II at Stirling, after being invited there as an act of reconciliation. James, 9th Earl, was rather hostile to James following the murder and plotted with the English. 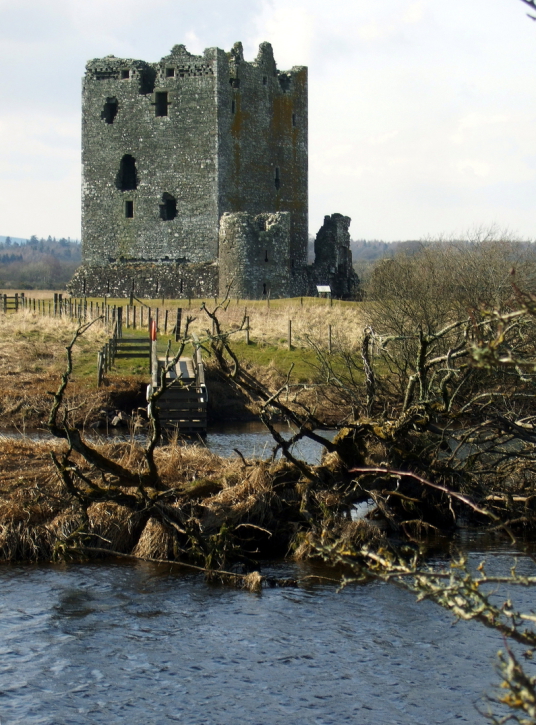 In 1455, after the defeat of Douglas and his family, the Black Douglases, James II besieged Threave with artillery, but apparently not with Mons Meg, although this is a matter of dispute. James was helped by the MacLellans: Sir Patrick MacLellan of Bombie, was murdered at Threave in 1452 by the Earl of Douglas. The garrison surrendered, however, after a siege of two months, but this seems to have been achieved by bribery rather than ordinance. 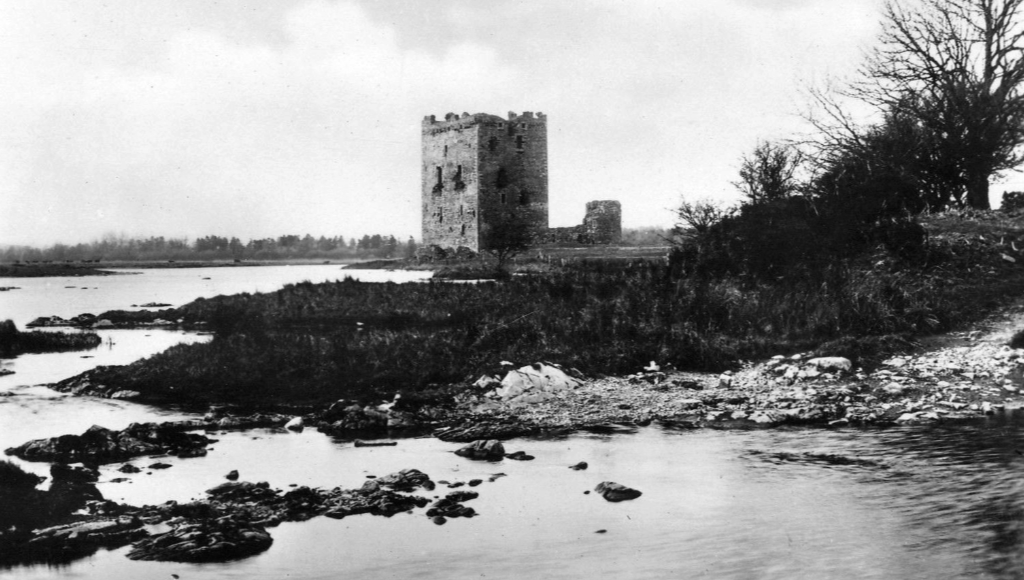 Threave then became a Royal fortress. In 1513 the Maxwells were made keepers, and in 1525 the post was made hereditary. After being captured at the Battle of Solway Moss in 1542, the Maxwell keeper was obliged to turn the castle over to the English, but it was retrieved by the Earl of Arran in 1545. In 1640 the castle was besieged by an army of Covenanters for 13 weeks until the Maxwell keeper, now Earl of Nithsdale, was forced to surrender it. The castle was slighted and partly dismantled. 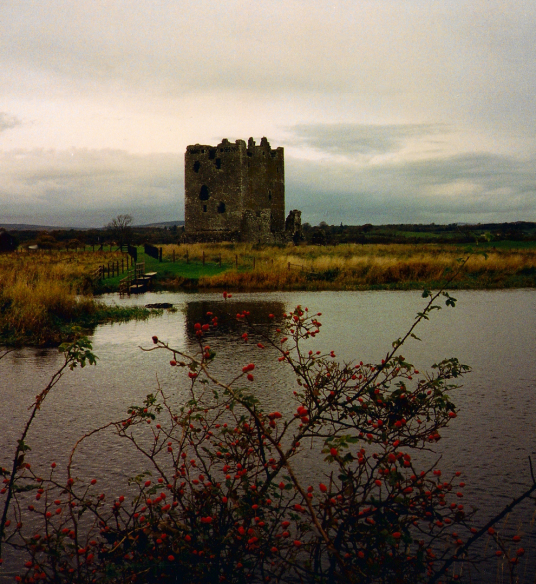 Threave was used as a prison for French troops during the Napoleonic wars. It was given to The National Trust of Scotland in 1948, but is managed by HES. 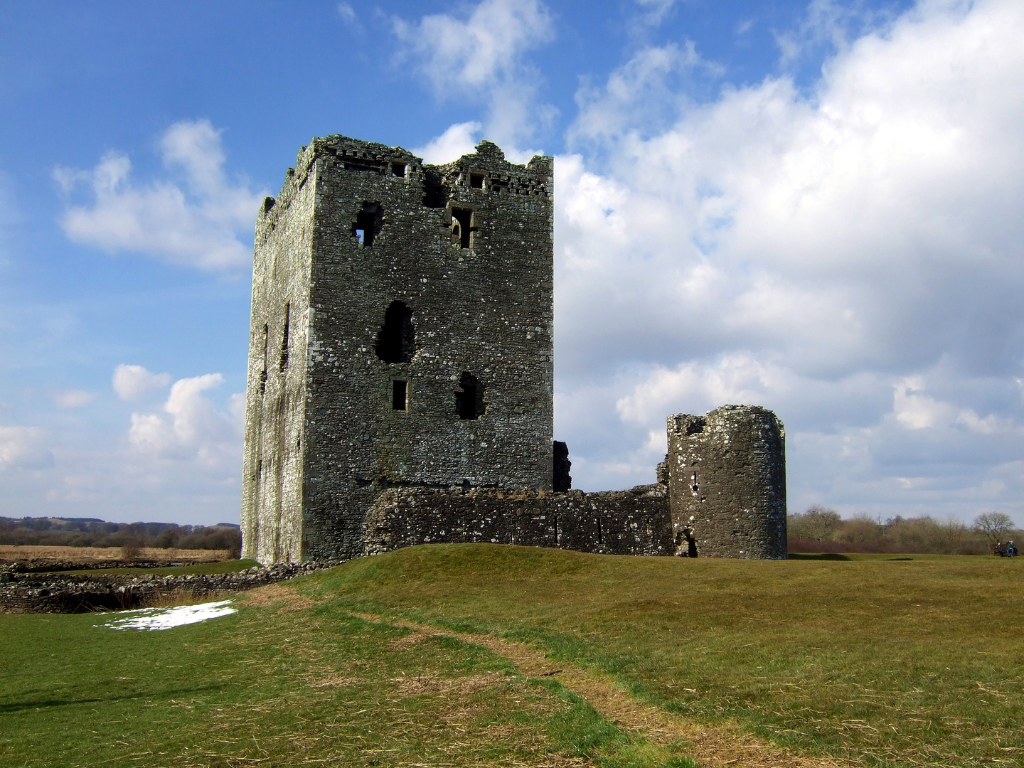 Unexplained breathing noises have been heard in Threave Castle: some have suggested a supernatural origin. 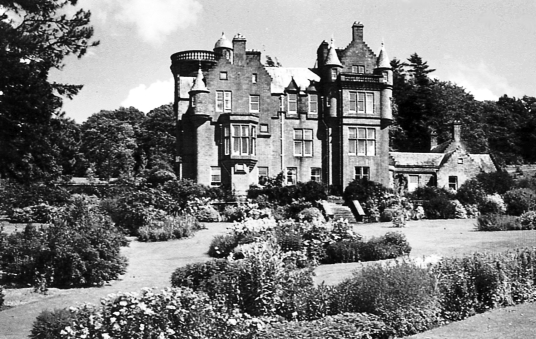 Threave House [NX 752605], a substantial castellated mansion of three storeys with an attic and basement and a taller drum tower, was built in 1873 by the Gordon family, who acquired the estate in 1870. The estate is owned by the NTS and is home to the School of Heritage Gardening, and the fine gardens are open to the public. Tours of some of the rooms of the house, decorated as they would have been in the 1930s, are also available. There is a woodland walk and bat trail.