Argyll & Dunbartonshire: About 7 miles south-west of Dunoon, on track north of A815, at the southern tip of Cowal, south-east of Castle Toward, at Toward Castle.

OPEN: Access currently unclear. Formerly park in layby on A815, then through gate and along track to east: short walk. 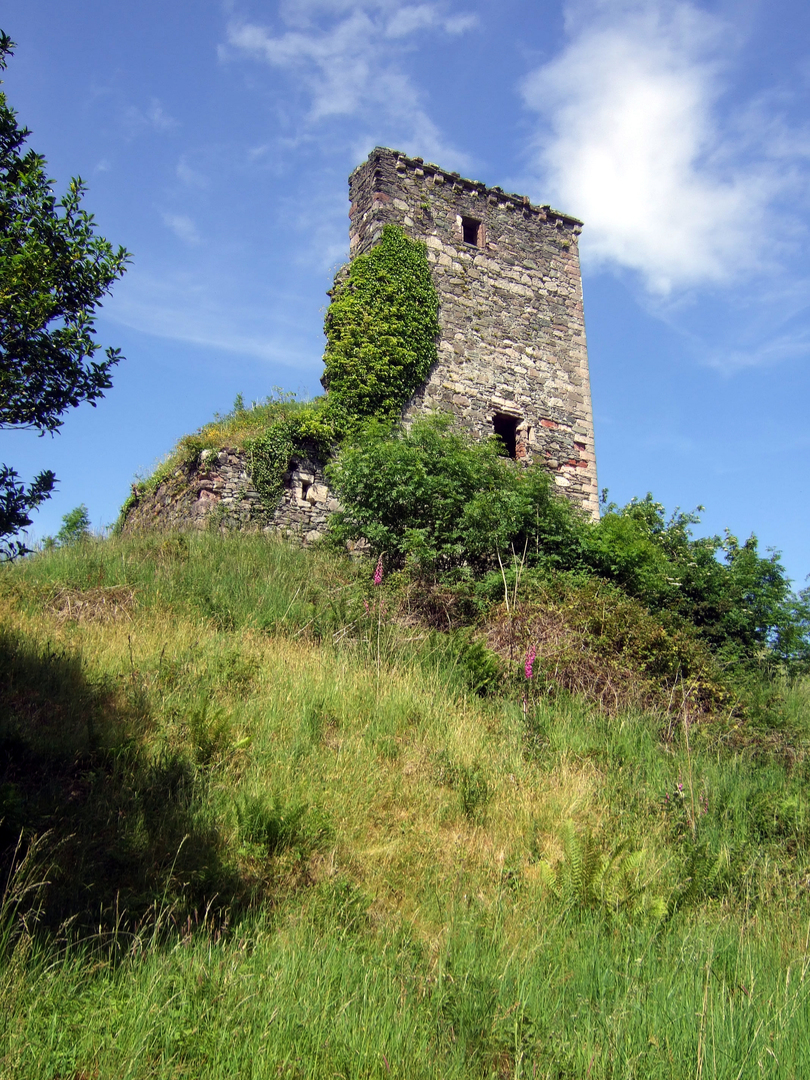 In a pretty spot, Toward Castle consists of an atmospheric ruined 15th-century tower, one wall standing to the height of the parapet, and a 16th-century courtyard, with a decorated arched gateway. The basement of the tower is vaulted, as was the first-floor hall. The stair, in the thickness of the walls, led up to the first floor, and the main entrance appears to have been at first-floor level. 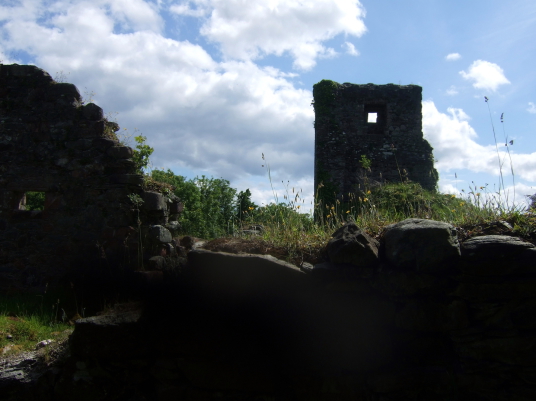 The courtyard contained a range of buildings, housing a hall and kitchen, and there was also a gatehouse and bakehouse. 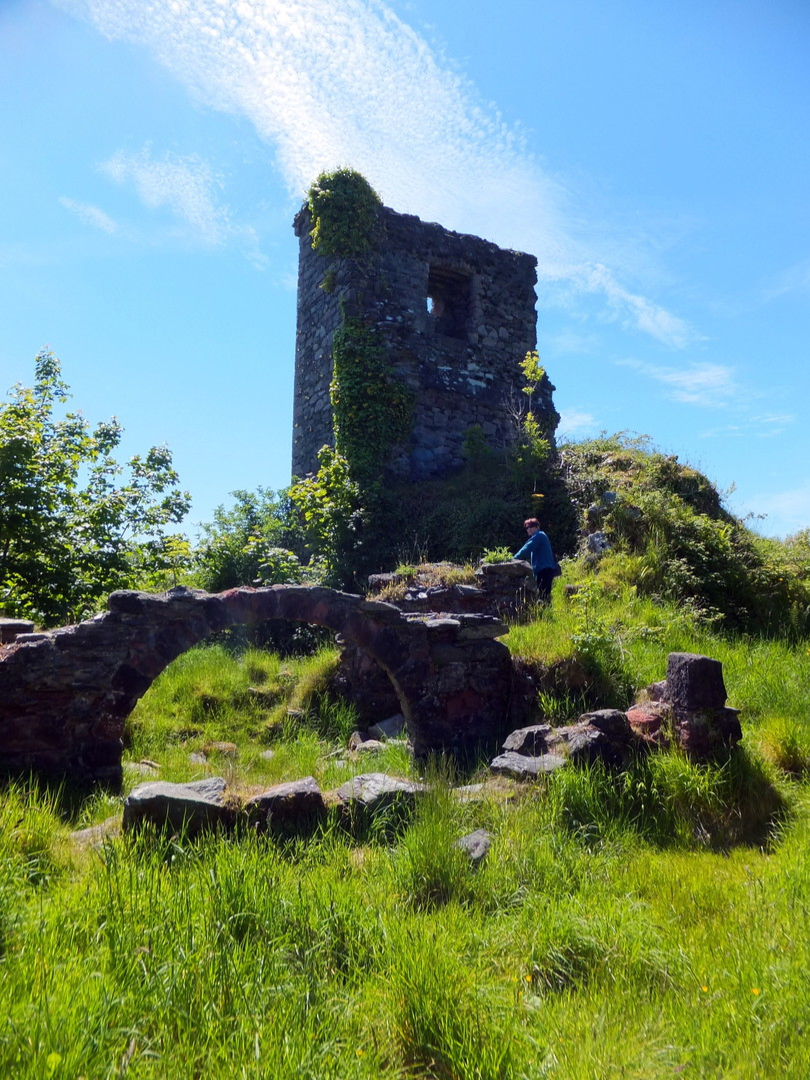 ‘Castell of Towart’ is marked on Pont’s map of Dunoon and Inveraray.
This was a property of the Lamonts, who had held lands in Cowal from 1200 or earlier. Mary, Queen of Scots, visited in 1563. 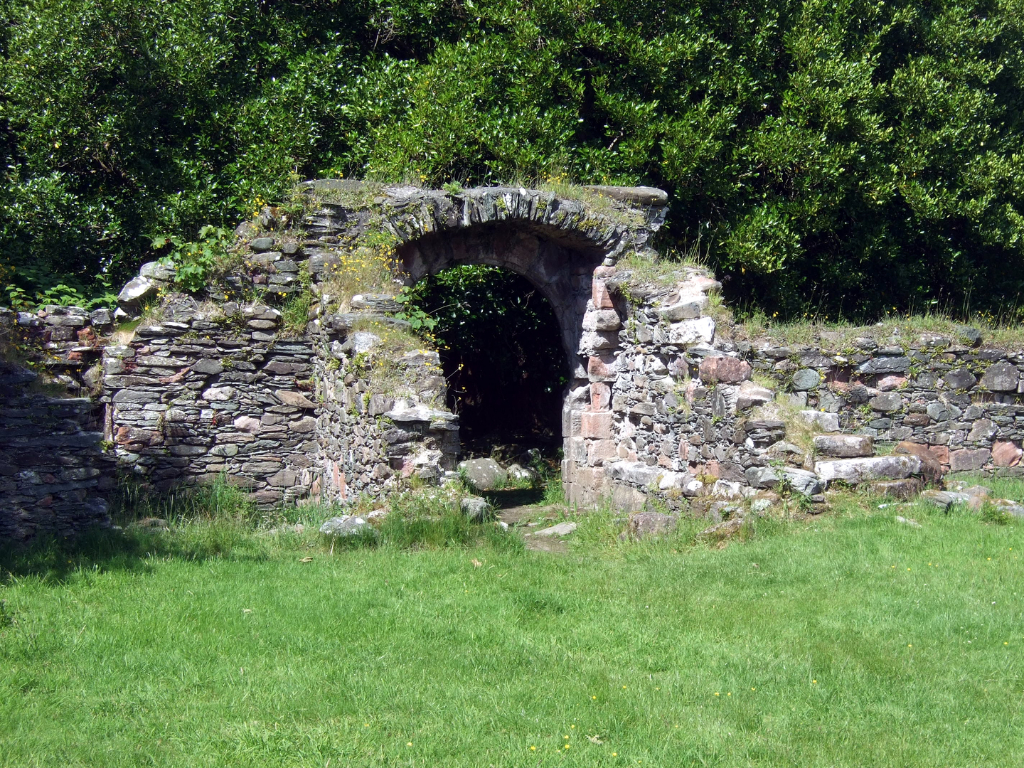 The Lamonts were Royalists, and in 1646 the Campbells bombarded, captured, looted and burnt the castle after a two-week siege – this is said to have been in retaliation for the Lamonts sacking Kilmun and killing many Campbells. Although the Campbells had promised that the Lamonts could go free, they massacred and mistreated any Lamonts they found, including old folk, women and children. They took many of the captives back to Dunoon where they hanged 36 from one tree, while others were buried alive in pits. The chief of the Lamonts, Sir John, was imprisoned in Dunstaffnage Castle. Many Lamonts changed their name to Black after the slaughter. 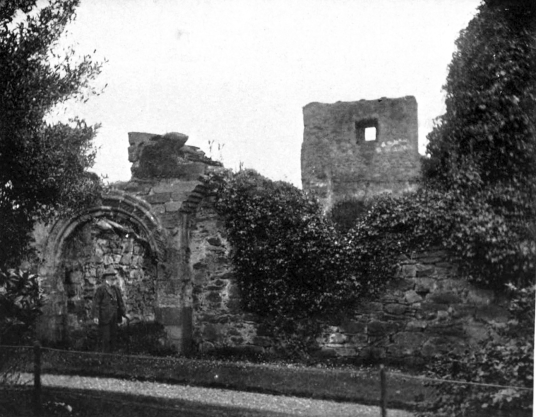 More on the massacre, including the indictment against the Marquis of Argyll, can be found below:

From: The Island of Bute Bute in the Olden Times (Hewison, 1895)

One of the saddest tragedies that ever horrified Bute and the west was completed near the Castle Hill of Dunoon, when the Provost of Rothesay, several other townsmen, and adherents of Sir James Lamont of Inveryne and Ascog [Cowal], were cruelly murdered by the Clan Campbell. The episode was the ground for one of the indictments which brought Archibald [Campbell], Marquess [Marquis] of Argyle [Argyll], to the block for high treason, fifteen years after its occurrence.

According to the charge preferred to Parliament on January 13, 1661, by the Lord Advocate, Sir James Lamont, Knight, on behalf of himself, vassals, and kindred; Robert Campbell, laird of Escog [Ascog]; Colin Macklawchlane, minister of Lochgoilhead; and others, it appears that Sir James Lamont had received a commission from King Charles in 1643 to prosecute a war against Argyle and other Scots rebels, which he executed till 1646, when King Charles gave himself up at Newark; and in consequence, Lament sheathed his sword, and retired to his houses at Toward and Ascog, where his vassals had found shelter during the times their lands were wasted.

The Campbells, under the lairds of Ardkinglas and Inveran, in 1646 laid siege to these two strongholds, and ultimately compelled Sir James and his garrison at Toward to capitulate, on condition that life, fortune, and goods, with their personal liberty, should be honoured. The treaty was instantly dishonoured, and their captives, to the number of 200, were bound with their hands behind their backs, and detained in the courtyard of the castle.

"Nevertheless, they plundered the said houses of the whole furniture and goods therein; and did rob and take away the whole money and cloathes [clothes] of the persons within the same, and did drive away the whole cattle. These and former wastation to the said Sir James, his friends, vassals, and tenants, did exceed the sum of fifty thousand pounds sterling, and in a most cruel and most barbarous way, while some of his poor friends were rescuing their own goods, they barbarously murdered and massacred a number of innocent women, as namely Mary Gilaspie, Marione Mackleish, a young maid; Caleech Breedmachfoyne, Margaret Crawfurde, and certain others, and inhumanly left their bodies as a prey to ravenous beasts and fowls," &c.

Sir James was ferried over to Ascog to cajole that place of defence into surrender. Then the same treachery and cruelty ensued.

" In pursuance of their further villany, after plundering and robbing all that was within and about the said house, they most barbarously, cruelly, and inhumanly murdered several young and old, yea, suckling children, some of them not one month old."

After devastating and burning the house of Ascog, and wasting the orchard and demesne, the ruthless Campbells conveyed their prisoners over to Toward, Sir James, and a few of kin, being taken direct to Inveraray. There he was brutally used, and was hurried off to imprisonment, which lasted six years: the meantime the Campbells enjoyed the lands of the Lamonts Robert of Auchinwilling [Auchavoulin] holding Toward, and Ardkinglas, Ascog, till 1661.

A bitterer fate awaited the captives penned up in Toward. They were marched off to the Castle of Dunoon. It was the leafy month of June, and all the fresh ash-trees around the church were in full foliage. Thither the melancholy procession wended, and soon the Campbells decorated an ash-tree with the dangling forms of their captives, whose names follow:

Hugh Lamond, the other brother.

Duncan Ger Lamond, in Kilmarnock (near Toward).

Gocie Lamond, son of above.

Duncan and John Lamond, sons to Walter Lamond, brother german to the Laird of Escog.

Hugh Lamond, in Gorro of the Carrie (Kilfinan).

What the Provost of Rothesay and other of his townsmen were doing there we cannot tell, probably, being a colonel of the Bute Militia, he went with his company to protect or release the prisoners from Bute, but the wild caterans of the Campbells fell on them as well, and butchered with dirks, pistols, and swords the following number:

“John Lamond, in Auchenschellich (Kilfinan), with hunger and thirst as he 4 score years with a flux on him and pining stood at the ladderfoot." (The ladder referred to was the one in use at the tree.)

John Jamieson, then Provost of Rothesay.

They noticed the Provost sweltering in his blood.

"John Jamieson, then Provost of Rothesay, who being thrice shot through the body, finding some life in him, did thrust several dirks and skanes in him, and at last did cut his throat with a long durk [dirk]; the said John Jamieson not only representing his Majesty's authority as a prime magistrate of his Burgh Royal, was so cruelly murdered in contempt thereof, and of the statutes made in that behalf."

The matter-of-fact indictment then proceeds to state:

"The Lord from heaven did declare his wrath and displeasure against the aforesaid inhumane cruelty by striking the tree whereon they were hanged in the said month of June, being a lively fresh growing ash-tree at the Kirkyard of Denoone amongst many other fresh trees with leaves. The Lord struck the said tree immediately thereafter; so that the whole leaves fell from it, and the tree withered, never bearing leaf thereafter, remaining so for the space of two years, which being cut down there sprung out of the very heart of the root thereof a spring like unto blood, popling up, running in several streams all over the root."

The defence of Argyle, that he also had a royal commission in 1644 to punish Lamont, and that he acted on the authority of Parliament, was of no avail, and being condemned, he was beheaded for this and other acts of treason, 27th May 1661.

So the tragedies of Ascog, Toward, and Dunoon were legally avenged. 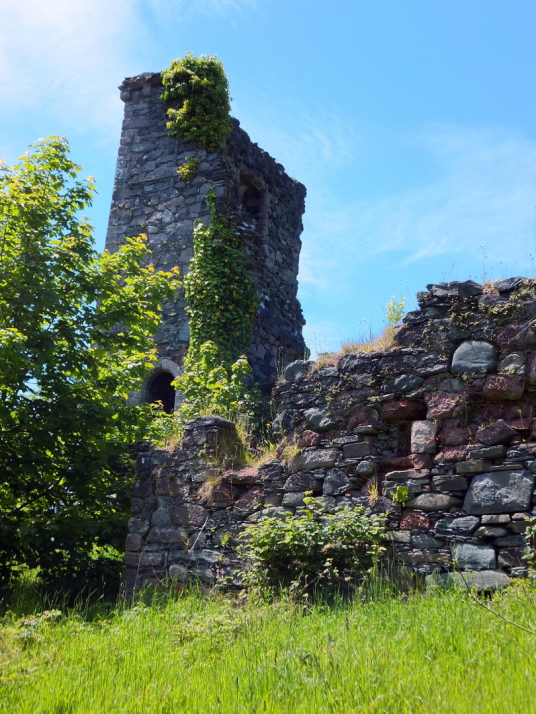 The Lamonts recovered their lands but their chief seat then became Ardlamont. The old castle was excavated and consolidated in 1970, and is in the care of the Clan Lamont Society. 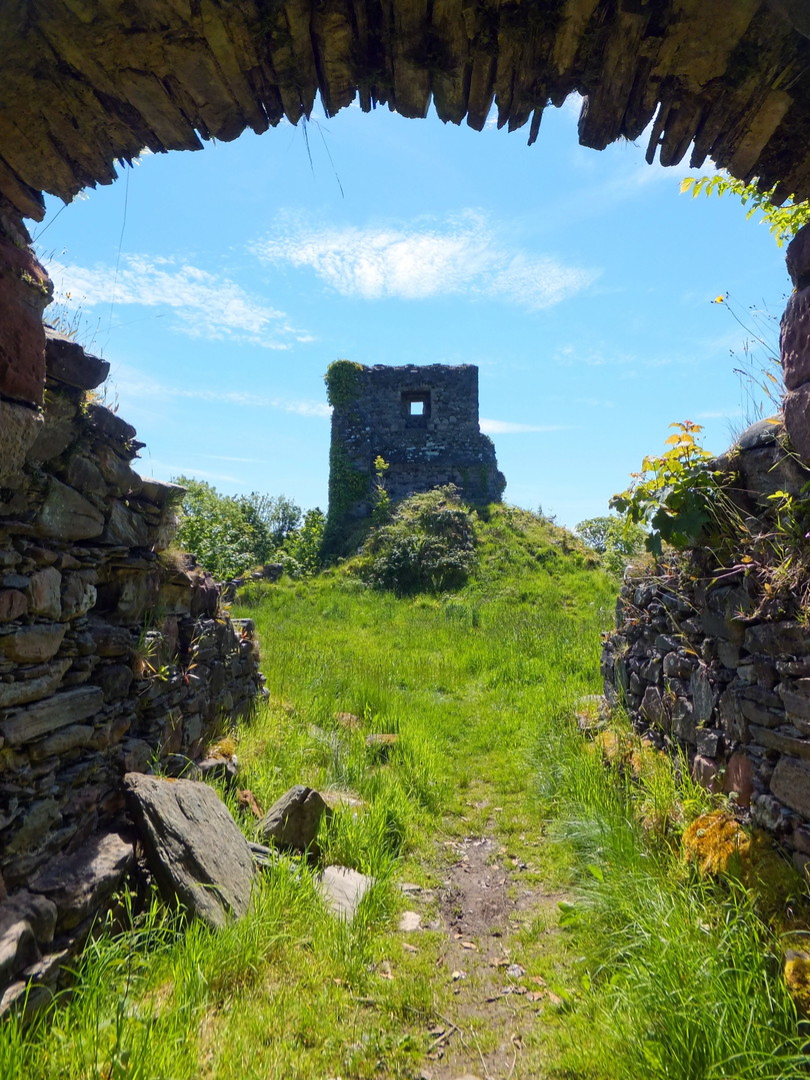 The ruins of the castle are said to be haunted by those slain in 1646 by the Campbells. A hoard of more than 200 silver coins was found at Toward in 1821. 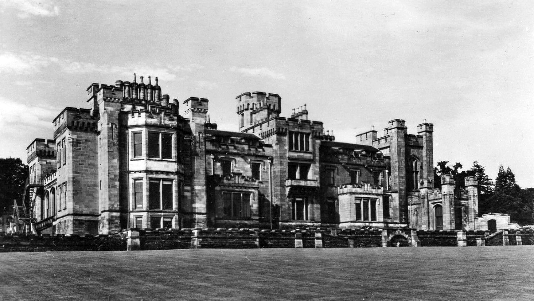 Toward Castle: Castle Toward (old postcard)

In the 1820s, a new castlellated mansion, Castle Toward [NS 115682], near the site of Auchavoulin, was built by the architect David Hamilton for Kirkman Finlay, Lord Provost of Glasgow. This property is currently for sale.
The BBC TV series Raven was filmed here.