Fife: On island of Inchcolm in Firth of Forth, 2 miles south of Aberdour on north coast of Fife. 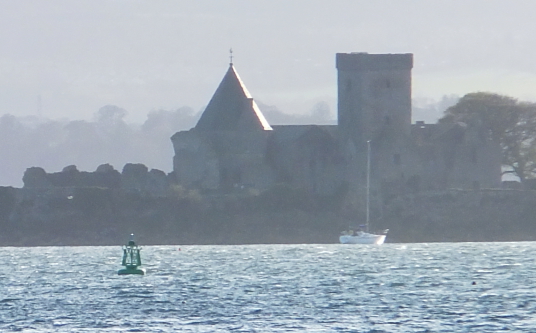 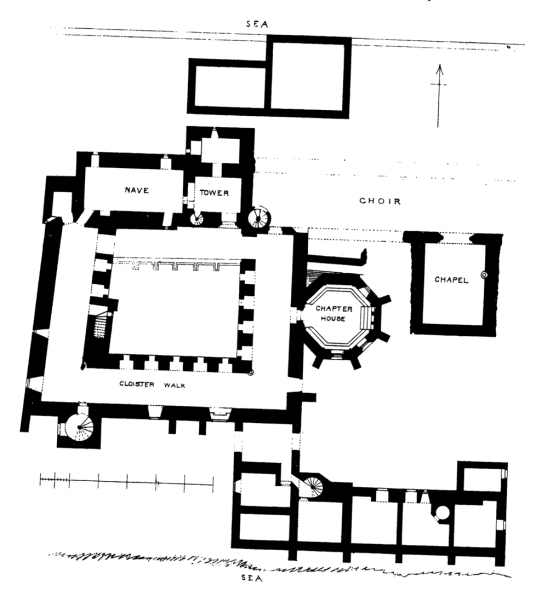 Inchcolm Abbey, although ruined, is the best preserved monastic complex in Scotland, the cloister and octagonal chapter house being roofed and complete, along with the dormitory and refectory. There is a rare medieval fresco wall painting, dating from the 13th century, depicting a funeral procession in a tomb recess. A new range of buildings, including a square fortified tower, were added on the south side about 1609. The tower rises to four storeys, and has a parapet. 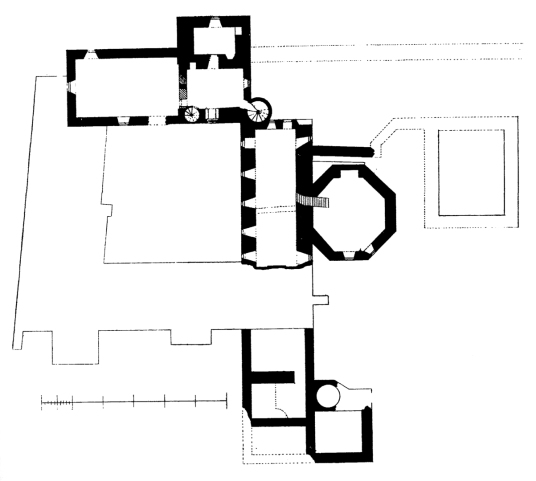 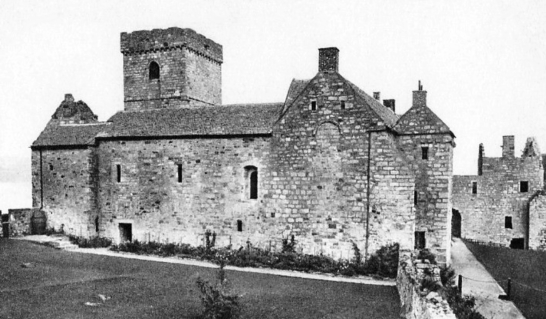 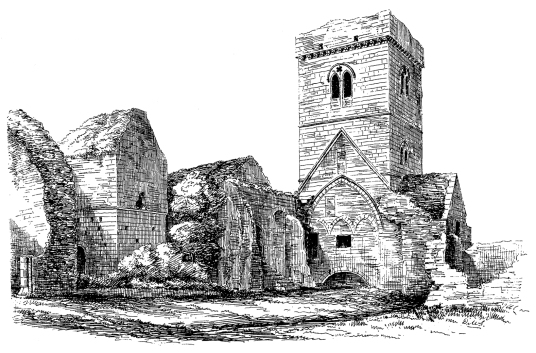 The abbey was founded in 1123 by Alexander I, King of Scots, after he had been rescued here from the sea, his boat having capsized crossing the Forth at Queensferry. Walter Bower, the then abbot, wrote the Scotichronicon at Inchcolm in the mid 1500s, a  great history of Scotland. The abbey was repeatedly attacked and was sacked by the English in 1542 and 1547, and was garrisoned by the French in 1548. 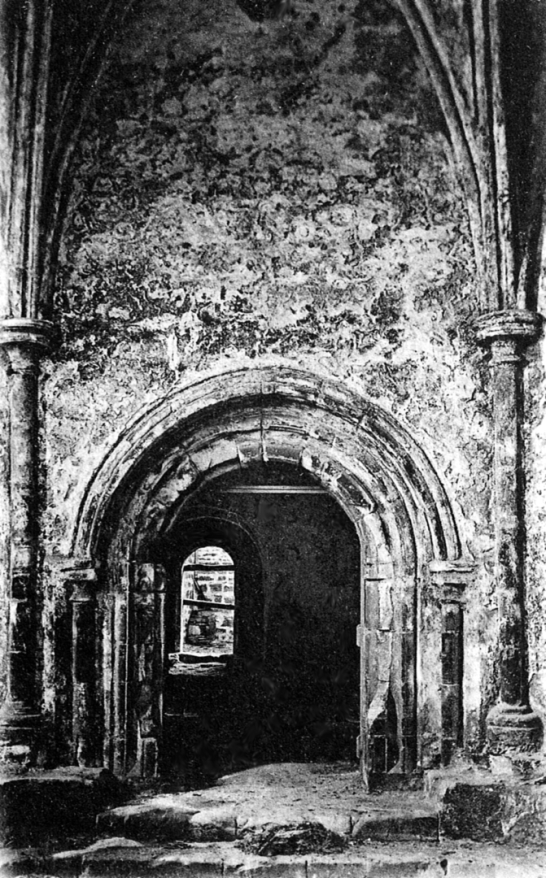 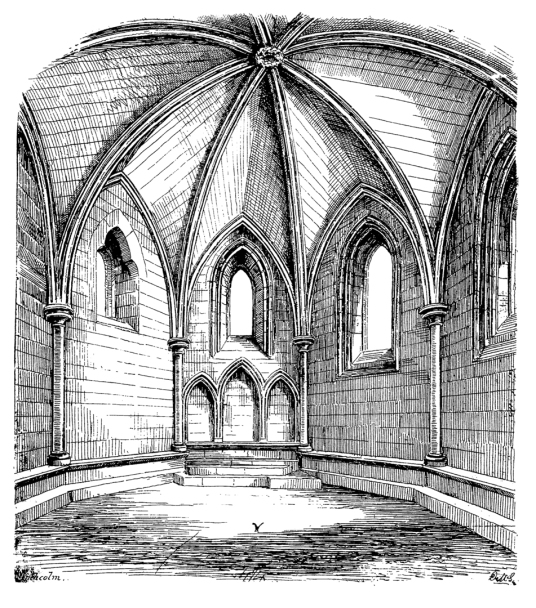 Inchcolm Abbey: inside of chapter house (MacGibbon and Ross)

The property passed to the Crown at the Reformation in 1560. In 1581 a confirmation of the infeftment of the isle, abbey and mansion of Inchcolm mentions that the abbey at diverse times was taken by Englishmen, and served to them as a fortalice and stronghold against our sovereign lord’s good subjects. 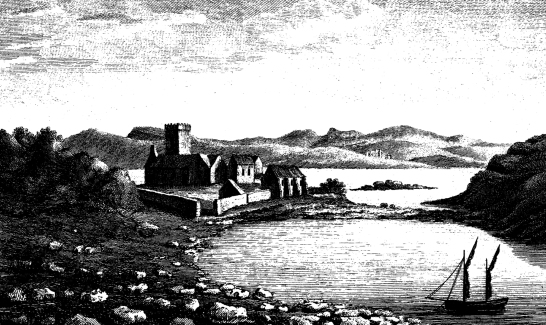 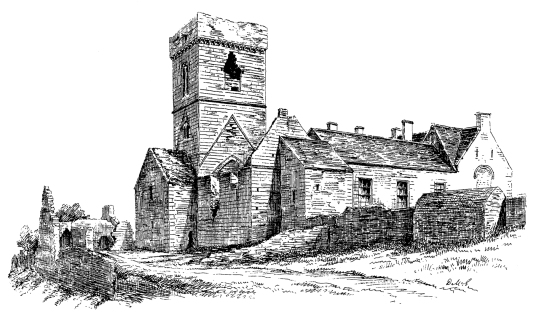 The abbey had then been left deserted to be used by pirates and so was then granted to Sir James Stewart of Doune so that some use could be made of the place. The property was given to Henry Stewart of Beith in 1609. His son married the heiress of the Regent Moray, and became the Earl of Moray. He was murdered by men sent by the Gordon Earl of Huntly on the sands at nearby Donibristle, the deed recorded in the ballad ‘The Bonnie Earl o’ Moray’. 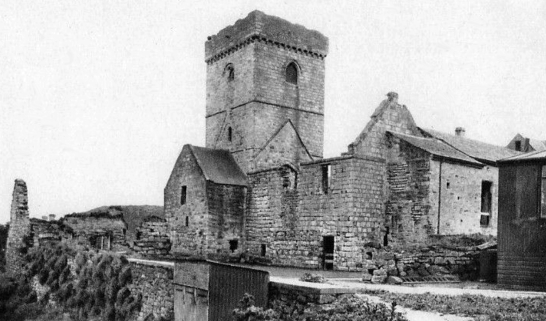 The island was later used as a naval quarantine station, fort, and Russian naval hospital, and was then fortified against German aircraft attacking the Forth Bridge and the Rosyth naval base in the two World Wars. In 1924 Inchcolm passed into the care of the State, is now managed by HES, and the picturesque island also has beaches, seals and other wildlife. 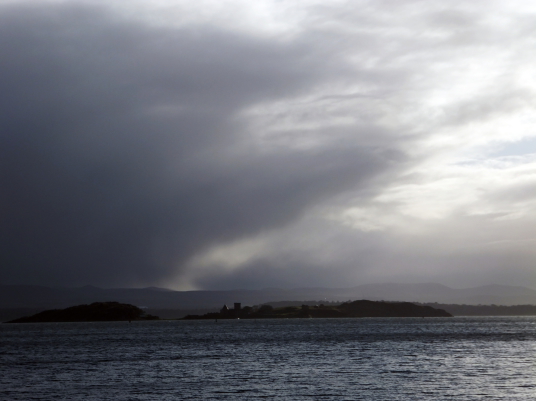 The stretch of water between the island and the north shore of the Forth is known as Mortimer’s Deep. This is indeed a deep channel, and is reputedly where the coffin and body of one of the Mortimers from Aberdour Castle was pitched overboard.