Kincardine & Deeside: About 6.5 miles east and north of Banchory, 3 miles west of Peterculter, on minor roads north of A93, 1.5 miles north of the Dee, at Drum Castle. 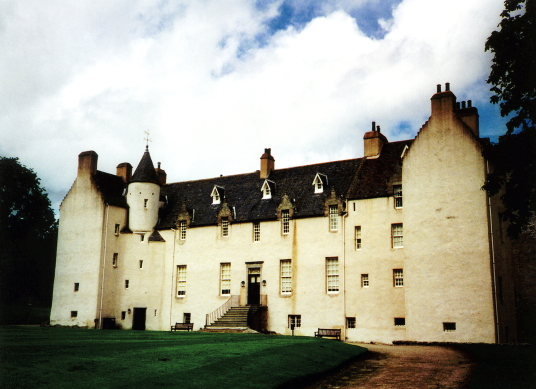 One of the oldest occupied houses in Scotland and surrounded by extensive gardens, Drum Castle consists of a plain 13th-century tower of four storeys. To this has been added a large L-shaped range of 1619 of three storeys, and the castle was extended again in the 19th century. 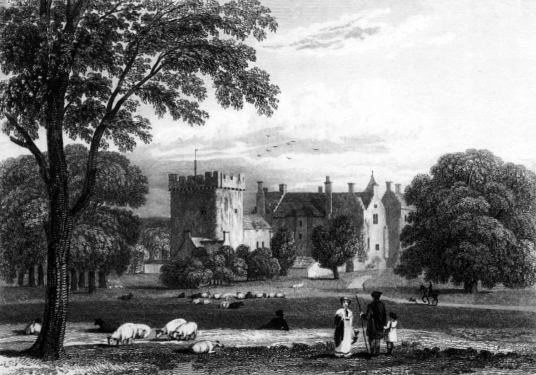 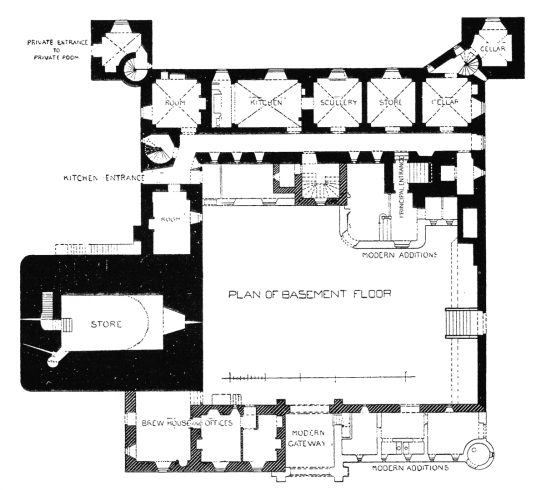 The old tower has rounded thick walls, which are pierced by small windows, gunloops and slits. Surrounding a flat roof, which may once have had a garret, the corbelled-out parapet has open rounds. An external stone stair leads to the entrance at first-floor level. 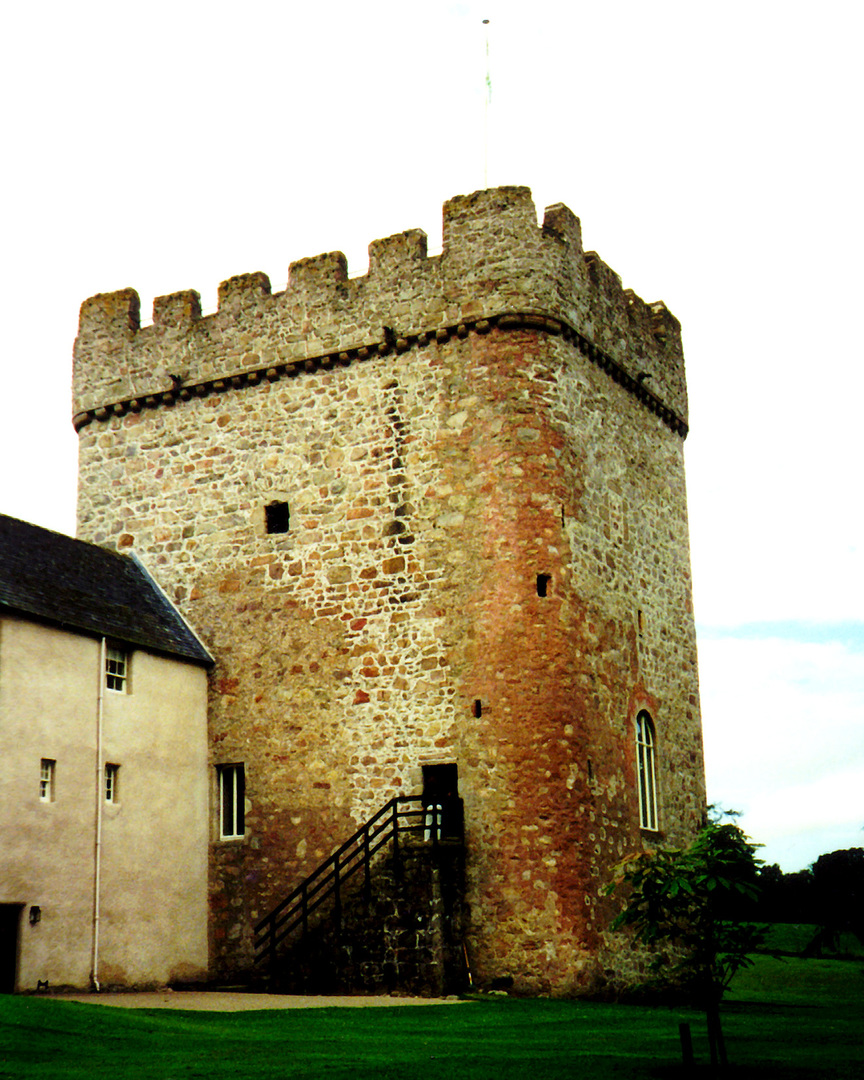 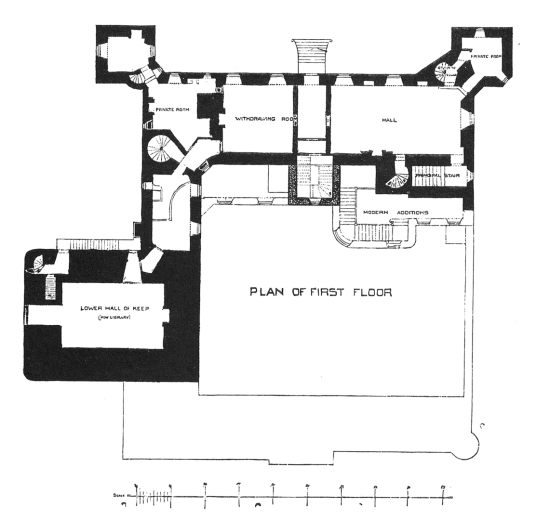 The vaulted basement is lit only by slits, and is reached down a straight stair, in the thickness of the walls, from the barrel-vaulted lesser hall on the first floor, now the library and accessed from the newer house. An external stair climbs to the entrance. The main hall, which is also vaulted, is on the second floor. A turnpike stair rises in the thickness of one corner. 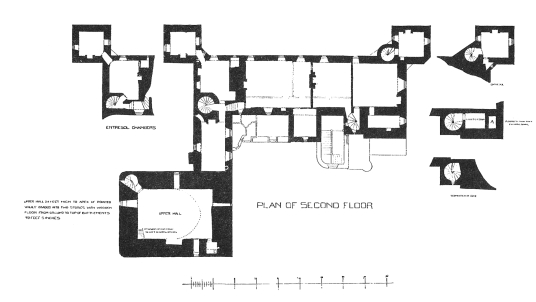 The 17th-century extension consists of an L-shaped range of three storeys and a garret, with square gabled projecting towers and a round stair-tower. There are other additions, which together with the older parts, form a courtyard completed by a curtain wall with a gateway. 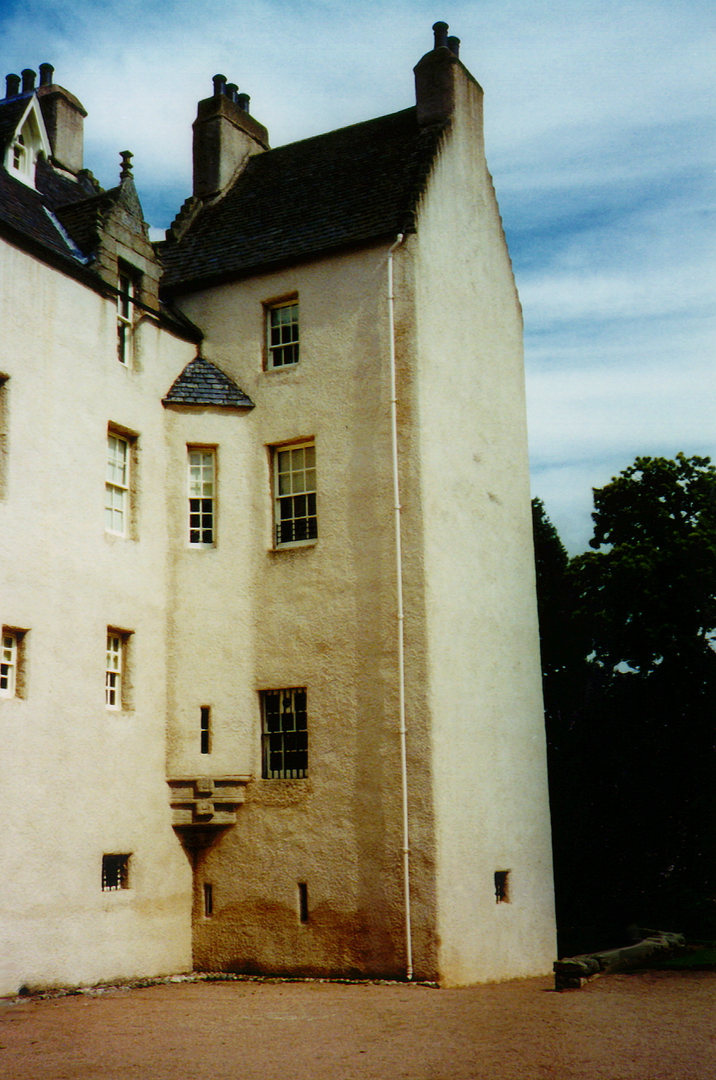 The basement of the extension is vaulted, and contained the kitchen with a large fireplace and cellars. A large hall occupies the first floor, and a turnpike stair led up to the private chambers above.
There is a walled garden with old roses, and in the grounds is the Old Wood of Drum, an ancient oak woodland. 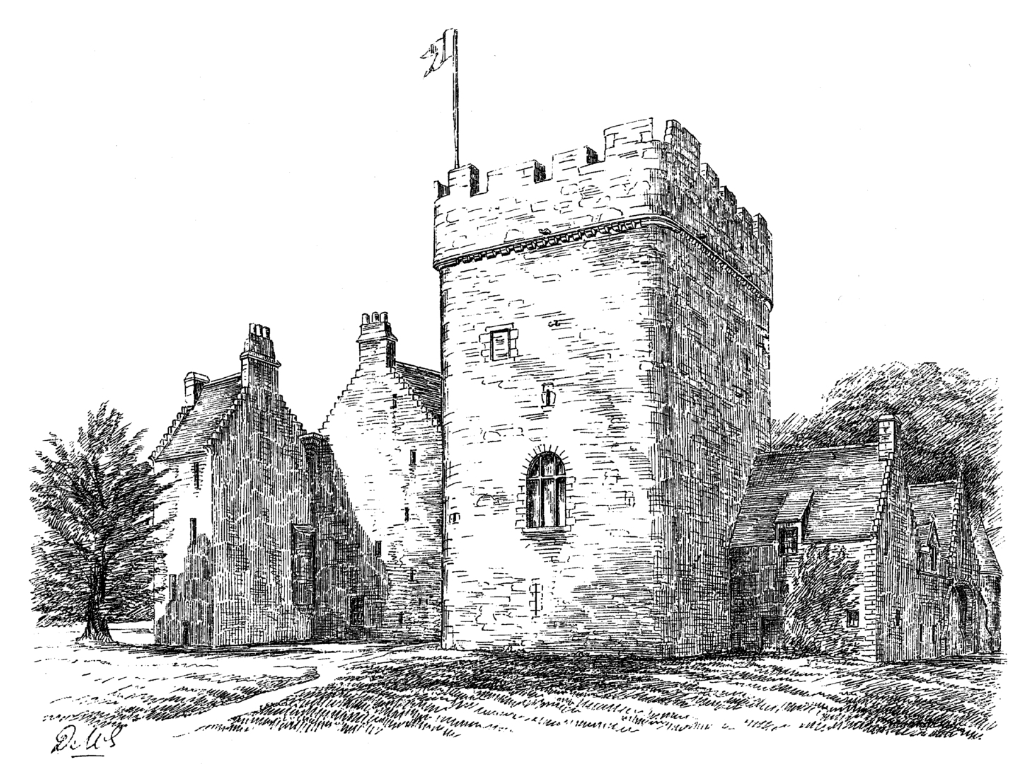 Drum was a property of the Crown and the tower may have been built by Alexander III. It was held by the Irvines from 1323, when the lands were given to them by Robert the Bruce after Sir William de Irwyn, or Irvine, whose seat was at Bonshaw, had been his standard bearer. The Irvines were much involved in the feuding between the Keiths and the Forbeses. The Irvines apparently burned down Hallforest Castle in revenge for the death of one of their family, and this came to battle at Keiths Muir, at which many of the Keiths were slain. 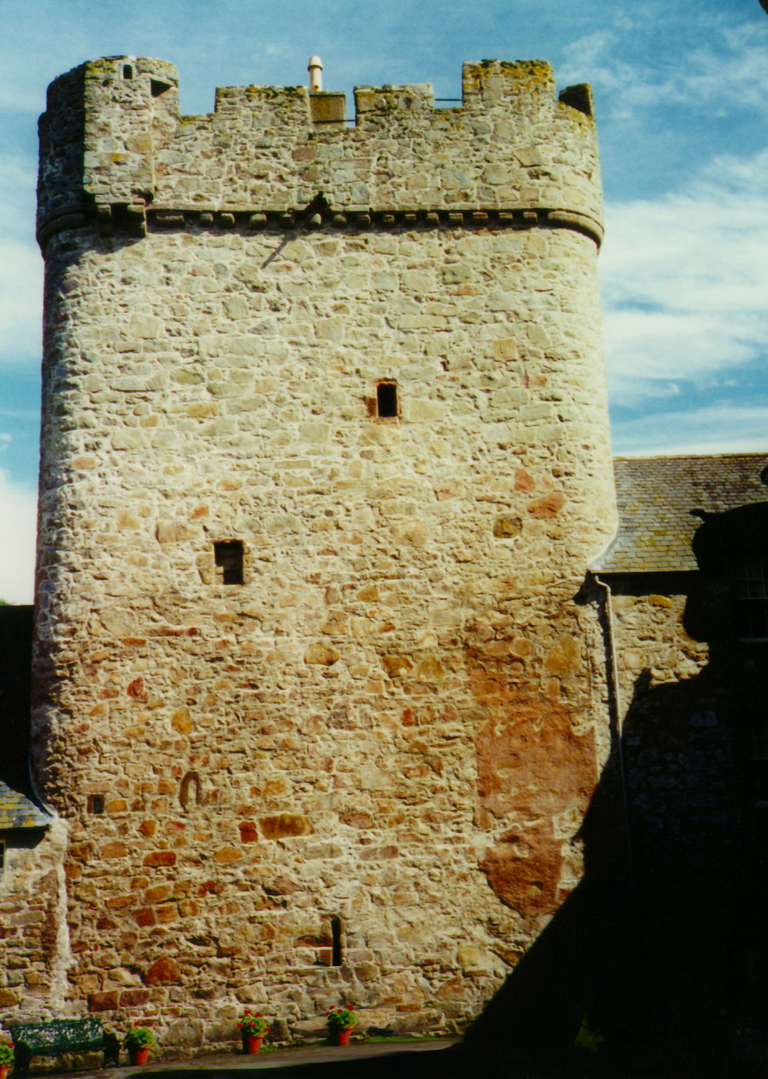 Sir Alexander Irvine, 3rd laird, was killed at the Battle of Harlaw in 1411, slain by and slaying MacLean of Duart ‘Hector of the Battles’, and his brother (who then changed his name to Alexander) married into the Keiths, so ending that feud. The eldest son of the 6th Laird, another Alexander, was slain at the Battle of Pinkie in 1547. Alexander, 10th laird, supported Charles I, and Drum was besieged and plundered by Argyll in 1644, and ransacked again in 1645 when the womenfolk were turned out of the castle. Alexander, 11th laird, caused a scandal when he married Margaret Coutts, a sixteen-year-old local shepherdess (and forty-seven years younger than him), after the death of his wife. They went on to have three daughters, and the events are featured in the old ballad ‘The Laird o’ Drum’.

The family were Jacobites, and fought in the 1715 and 1745 Jacobite Risings. Alexander, the 14th laid, another Alexander, died from wounds received at the Battle of Sheriffmuir in 1715; and Alexander, 17th of Drum, fought at Culloden, although he managed to escape both the aftermath of the battle and forfeiture, after hiding in a secret chamber at Drum and spending several years in exile in France.
The courtyard was remodelled by David Bryce in 1876. In 1975 the castle was given to The National Trust for Scotland.

Drum is said to be haunted, and unexplained manifestations are reputed to include unexplained women’s laughter in the stables and garden, a dresser being moved and a cold atmosphere in the Chintz bedroom, and the sighting of the apparition of a woman, along with unexplained heavy footsteps, said to be the bogle of Anne Forbes, wife of Alexander Forbes-Irvine, the 20th laird.