Dumfriesshire: About 2 miles north of St John’s Town of Dalry, on minor road west of B7000, short distance east of north Earlstoun Loch, at Earlstoun Castle. 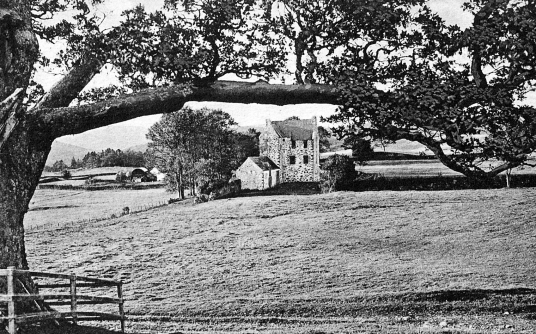 Earlstoun Castle is an altered 16th-century L-plan tower house, which probably incorporates earlier work. It consists of a main block of three storeys and a garret, and a stair-wing which rises a storey higher, formerly with corbiestepped gables. A round stair-turret is corbelled out in the re-entrant angle. The tower was later extended with two wings, and there has been an adjoining courtyard, little of which remains.
The entrance, in the re-entrant angle, leads to the foot of a wide turnpike stair and into the vaulted basement, which contained the kitchen. The first-floor hall has a fine fireplace, but has been subdivided. The upper floors were occupied by private chambers, and reached by the turret stair. There is a later kitchen in one of the additions.
‘Eryston’ is marked on Blaeu’s map of Kirkcudbright.
The property belonged to the Hepburn Earls of Bothwell, but passed to the Sinclairs in the mid 16th century, then the lands and barony were held by Francis Stewart, Earl of Bothwell, in 1581, although he was later forfeited.
In 1615 the property passed by marriage to the Gordons of Airds, and in 1641 Alexander Gordon of Earlstoun had a ratification which mentions the tower, fortalice and mill of Earlston. One of the family, William Gordon, was killed at the Battle of Bothwell Brig in 1679, and the castle was occupied by troops engaged in suppressing Covenanters. The family became baronets, and Sir Alexander Gordon, baronet and son of William, also a Covenanter, was imprisoned and was to be executed, but was released in 1689. The family got into debt, and by the middle of the 18th century the property had gone to the Newalls.
The Gordons have a 19th-century mausoleum in the burial ground at Borgue [NX 629483], commemorating Sir William Gordon, baronet of Earlstoun, who had taken part in the charge of the Light Brigade at Balaclava in 1854, although he lived to tell the tale and died in 1906. The Gordons of Earlstoun, baronets, now live in Australia.
The castle had become derelict, but is now in the care of the Vivat Trust and the outside has been renovated.