Dalkeith Palace is the magnificent mansion, including an old castle, of the Douglases and then the Scott Dukes of Buccleuch, set in beautiful landscaped policies and now a country park with lovely walks, cafe, restaurant and shop, near the town of Dalkeith in Midlothian in central Scotland. 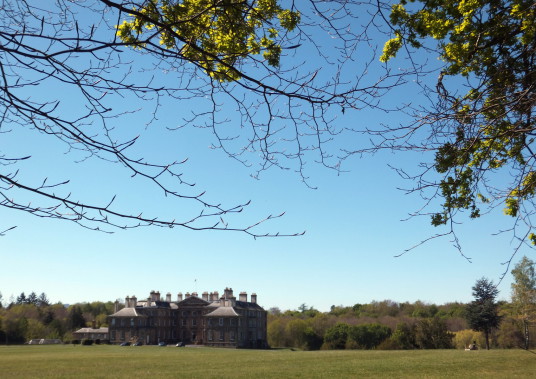 Lothians: About 0.5 miles north-west of Dalkeith, on minor road north of A6094, between the rivers North Esk and South Esk, at Dalkeith Palace and Dalkeith Country Park. 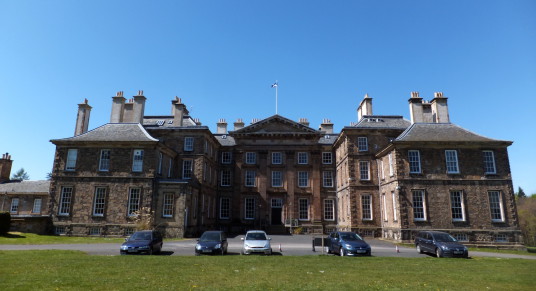 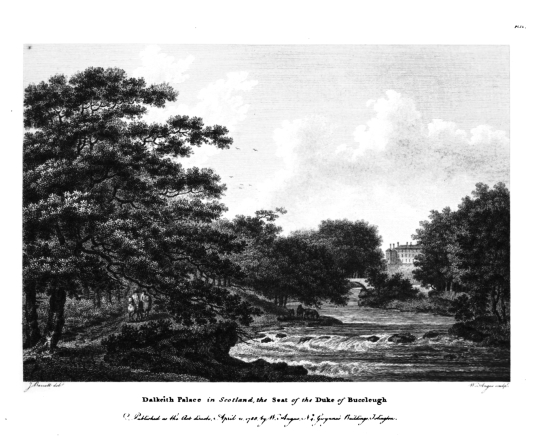 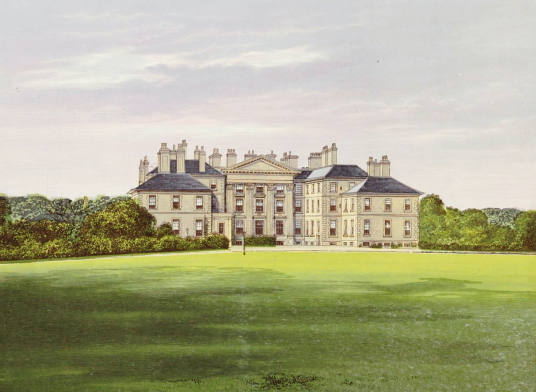 Standing in around 1,000 acres of sylvan woodland and parkland with the gorges of the Esk between the North and South Esk, Dalkeith Palace or House, an extensive 18th-century U-plan classical mansion, incorporates part of an old castle, possibly dating from as early as the 12th century. The old part has vaulted chambers and two turnpike stairs. 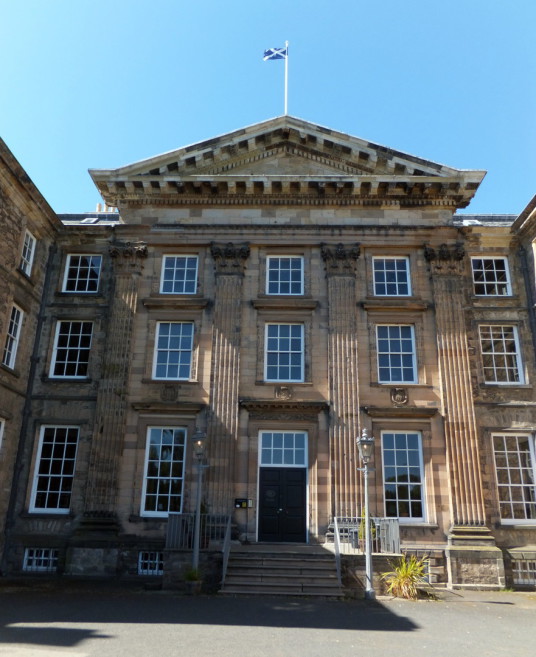 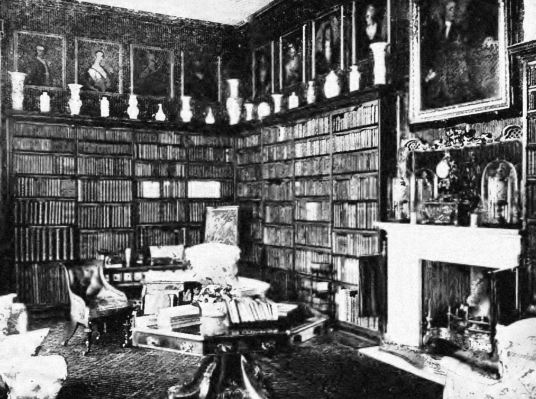 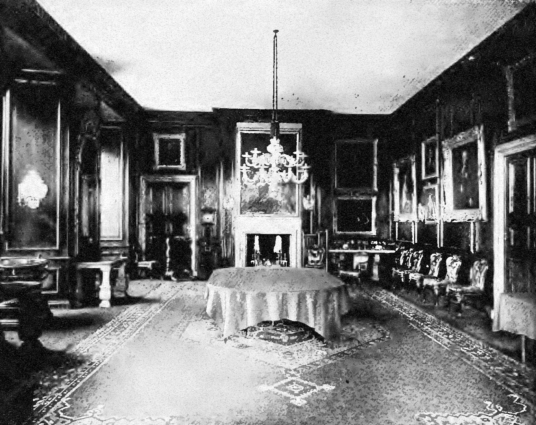 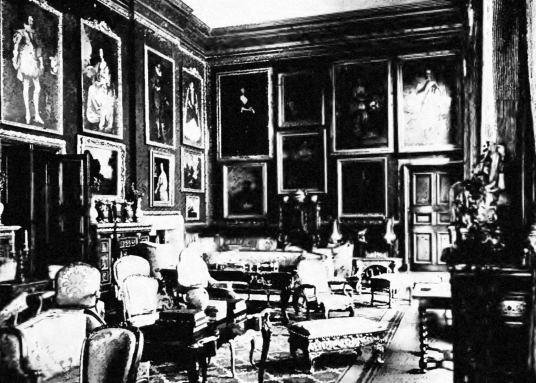 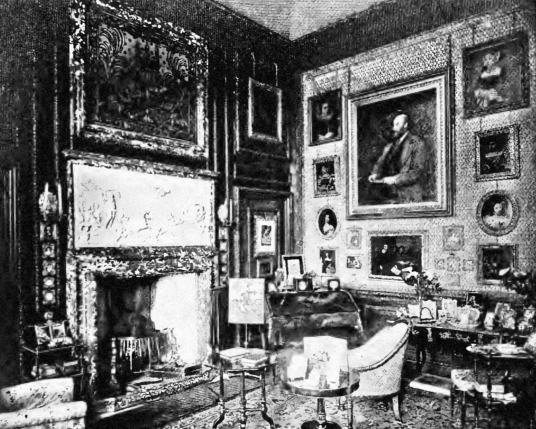 The mansion rises to three storeys in the main block with an a impressive classical facade with pilasters and a triangular pediment and lower advanced wings. The mansion has a grand marble main staircase and fine interiors, including carved fireplaces. 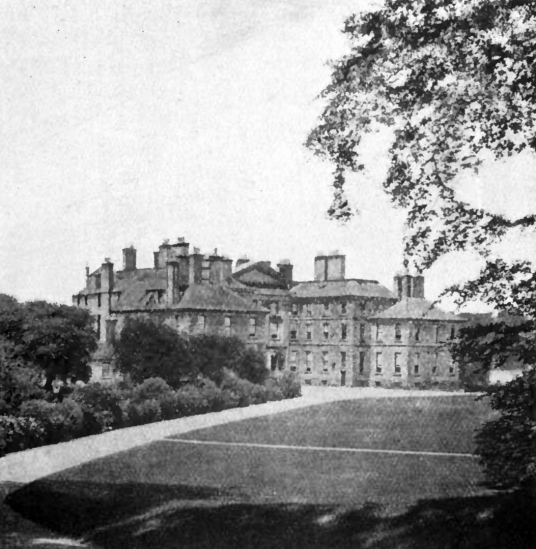 ‘Dalketh’ is prominently marked on Blaeu’s map of The Lothians by a large park, then on Adair’s map of Midlothian in large wooded and enclosed policies. The village is also depicted. 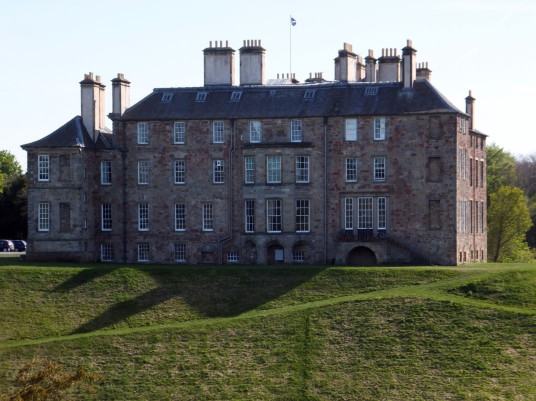 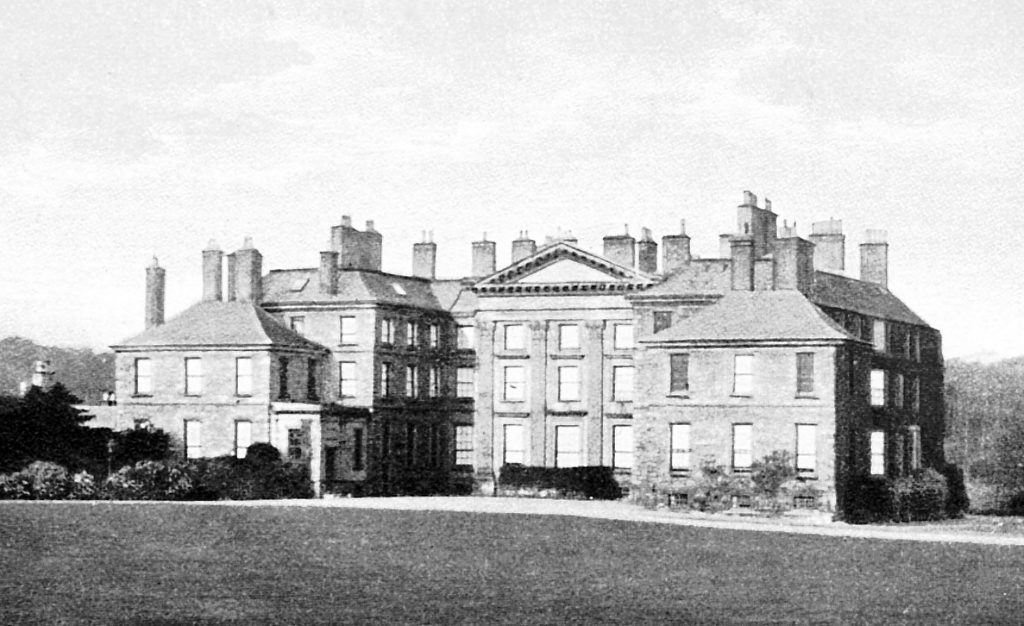 The landscaped policies, laid out by W S Gilpin, include the Montagu Bridge (see below), the 12-sided and elabroately carved Orangery designed by William Burn (which is to be restored), extensive woodland walks by the banks of the North and South Esk, and the large stables designed by William Adams in the 1740s and now used for Restoration Yard, a restaurant and shop. Some of the trees are more than 900 years old. 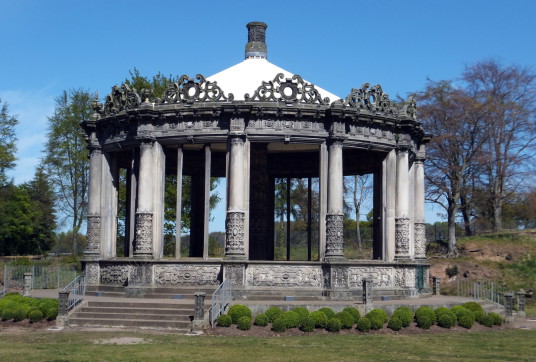 The property belonged to the Grahams from the 12th century, but passed by marriage to the Douglases about 1350. Dalkeith was sacked in 1452 by the brother of the murdered 6th Earl of Douglas, but the castle held out, and in 1458 James Douglas of Dalkeith was made Earl of Morton. James IV first met Margaret Tudor, his wife-to-be, here in 1503. Cardinal David Beaton was imprisoned at the castle in 1543. 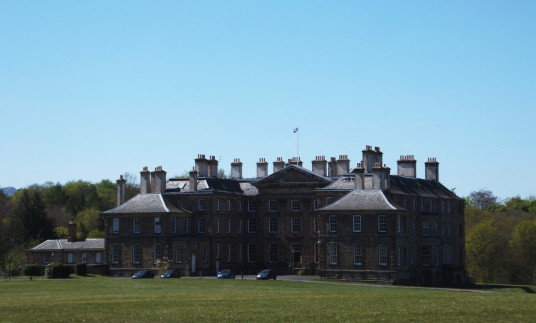 The castle was taken by the English after the Battle of Pinkie in 1547, and many Scots who had fled the battle were captured. James Douglas, 4th Earl of Morton – Chancellor for Mary, Queen of Scots, and later Regent for the young James VI – remodelled the castle, and built a magnificent palace in 1575 (he also owned Aberdour Castle in Fife). James VI visited in 1581, after Morton had been executed. William Douglas, 6th Earl of Morton, had a ratification of 1592 for the castle, palace, tower and fortalice of Dalkeith. Charles I was entertained here in 1633. 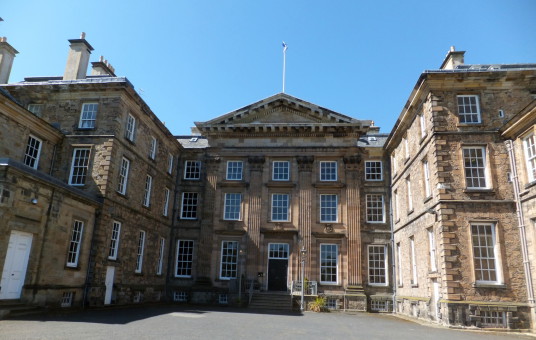 In 1642 the property was acquired by Francis Scott, 2nd Earl of Buccleuch. Anna, Duchess of Buccleuch in her own right, stayed here and had the house remodelled. Her husband, James, Earl of Monmouth, had been executed in 1685 for treason, after leading a rebellion against James VII. Bonnie Prince Charlie stayed at the house for two nights in 1745, as George IV in 1822 and Queen Victoria in 1842. 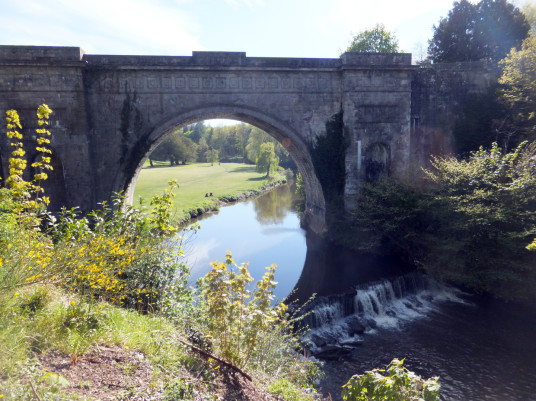 In the lovely and extensive grounds are the impressive Montagu Bridge, an impressive single-span structure designed by Robert Adam in 1792, commissioned by Henry, 3rd Duke of Buccleuch, to commemorate his marriage to Elizabeth Monagu, daughter and heiress of the Duke of Montagu. Henry incorporated both the Douglas and Montagu name into his own, and the family became Douglas Montagu Scott. The weir below the bridge is part of the landscape feature, reflecting the bridge above the weir, providing a cascade below it. 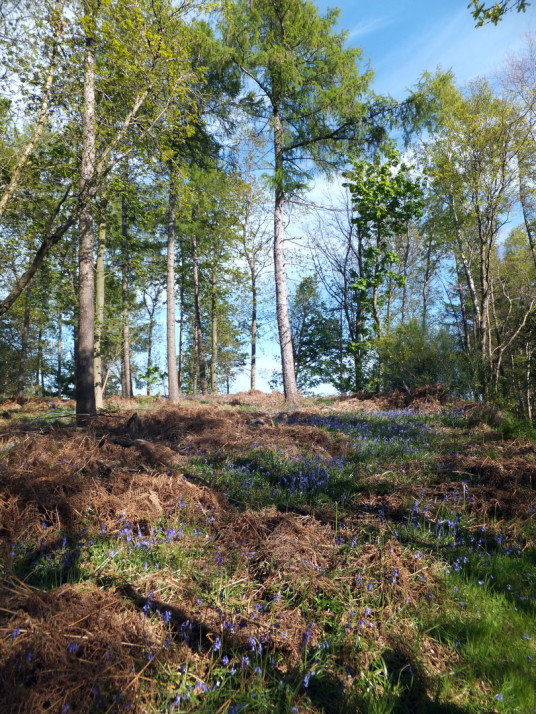 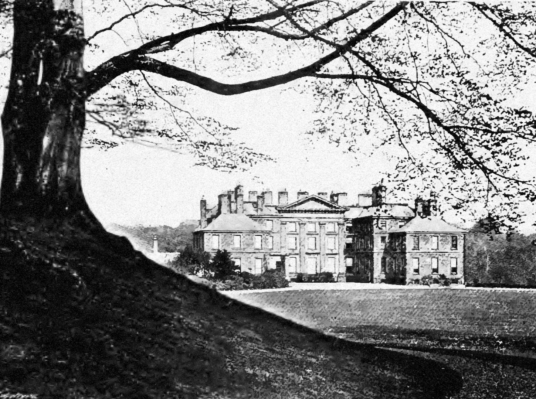 The family had stopped using the house by the time it occupied by the army during World War I , and during World War II the palace was used to house Polish troops. Since 1986 Dalkeith Palace has been used by students from the Wisconsin in the USA, and the country park was revamped from 2015 in a £7million investment. Ricard Montagu Douglas Scott is the 12th and current Duke of Buccleuch. The family also own Branxholme, Bowhill and Drumlanrig Castle in Scotland, and the magnifcient and grand Boughton House, in landscaped gardens and country park, in Northamptonshire in England. 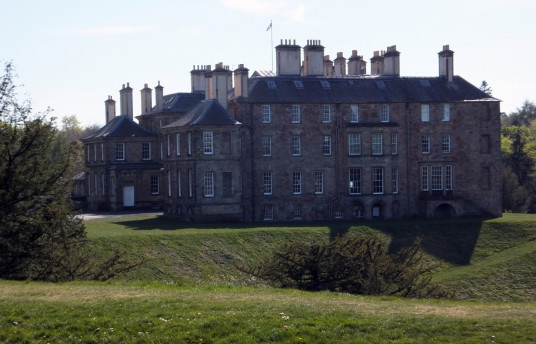 Dalkeith Palace is said to be haunted by the ghost of a woman, a ‘Green Lady’ which is said to have been witnessed in recent times. One story is that the ghost is the spirit of a girl around eight-years-old called Anna, who fell out of one of the upstairs windows, and the building is haunted by the wee girl’s spirit, as well as that of her nursemaid.