Hermitage Castle is a large, ruinous and brooding castle in a lonely and windswept spot, held by the Soulis family, the Douglases and then the Hepburns, near Newcastleon in the Borders of Scotland, near England. 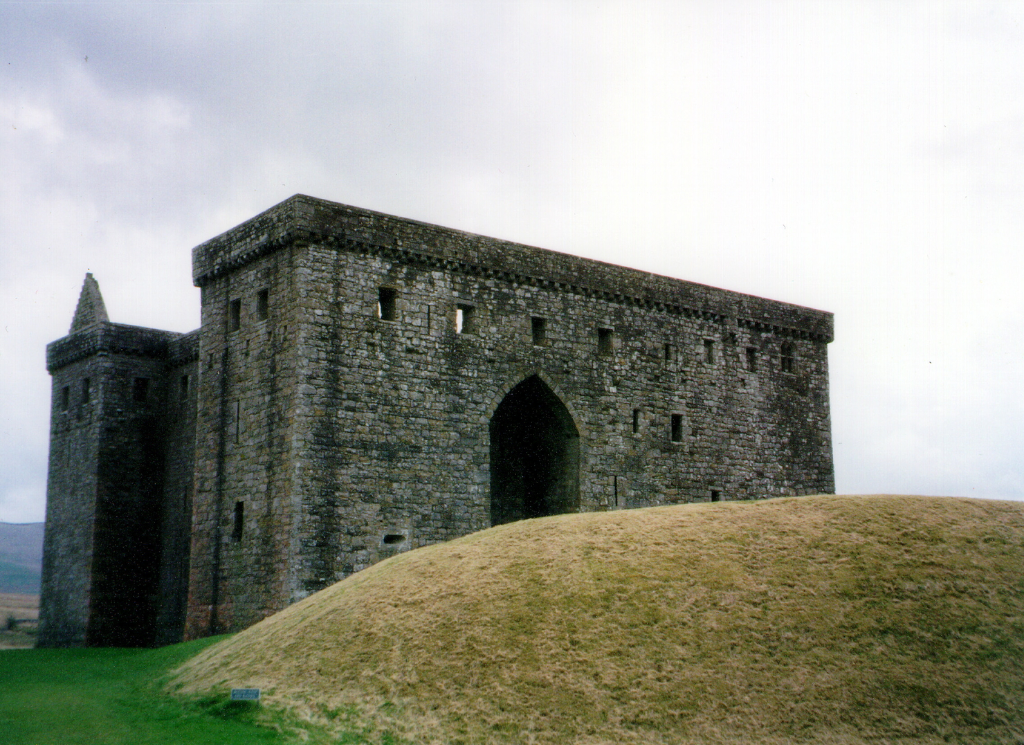 Borders: About 5 miles north of Newcastleton, on minor road west of B6399 at Hermitage, just north of Hermitage Water, at Hermitage Castle. 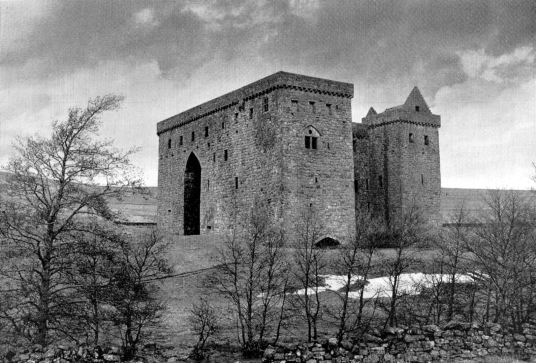 One of the most impressive and oppressive of Scottish fortresses and known as the ‘strength of Liddesdale', Hermitage Castle consists of a 13th-century courtyard and large 14th-century tower of four storeys, around which has been constructed a massive castle. The tower had small square towers added at three of the corners, and the entrance was at first-floor level and defended by two portcullises. In the 15th century a new rectangular wing was extended from the main tower. It lies in a bare and windswept location, not far from the border with England, and is surrounded by earthworks for artillery. 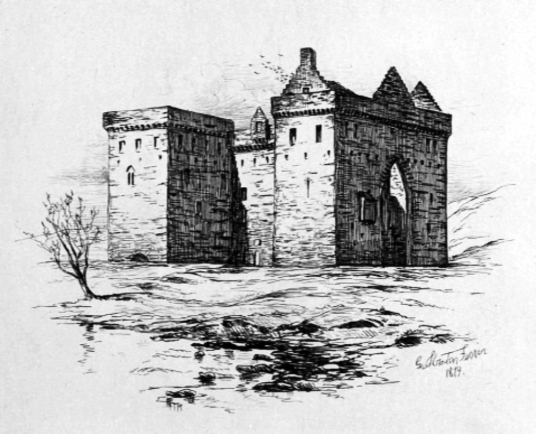 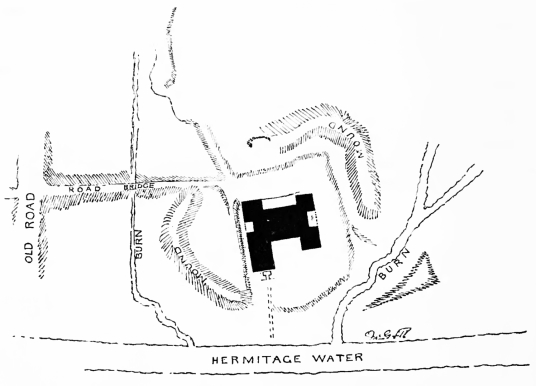 The walls are pierced by small windows and splayed gunloops. A timber gallery projected around the whole building, the holes to support the joists still visible. 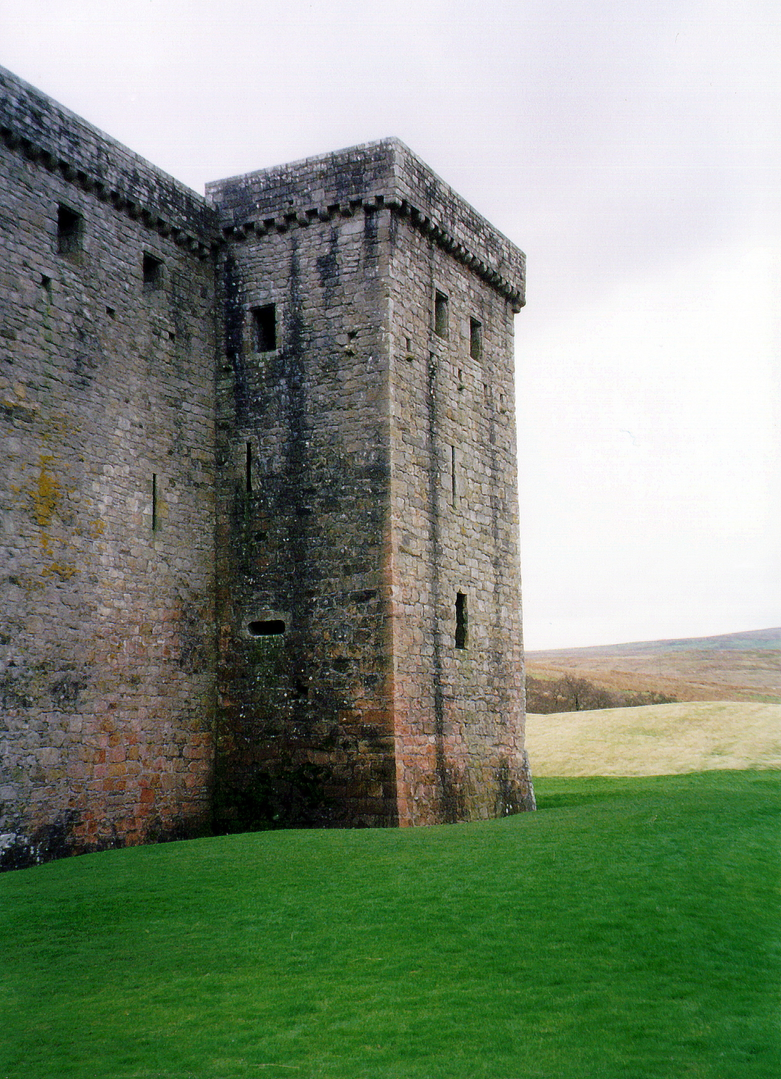 The entrance leads into the central courtyard, but the buildings within are very ruined. 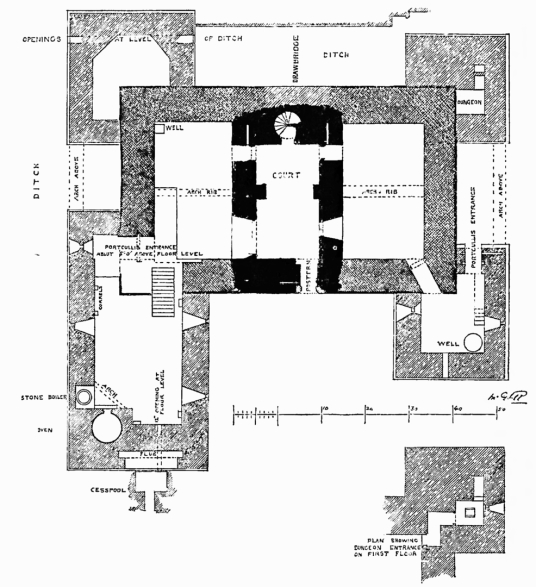 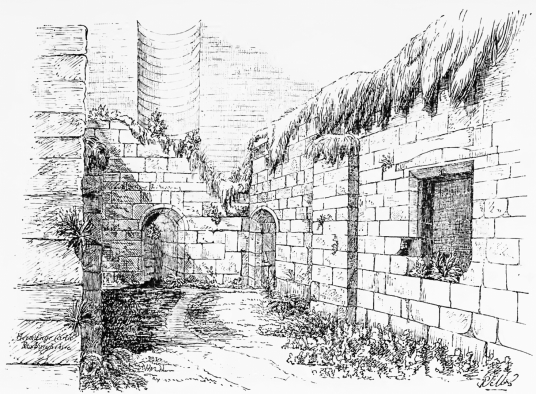 The property belonged to the Dacres, who had a stronghold here in the 13th century, but passed to the Soulis family, who strengthened the castle. One of the family (probably William or possibly Sir Richard, his father) was said to be a man of ill repute and to have practised witchcraft. Many local children were reputedly seized by Soulis and never seen again (and Fair May of Gorrenberry was also entangled), their corpses to be used in his diabolic conjurings. Soulis could not be killed by ordinary means. The local people, according to one story, eventually rebelled and Soulis was wrapped in lead and boiled in a cauldron at the nearby stone circle of Nine Stane Rig, although he may actually have been imprisoned in Dumbarton Castle for supporting the English. Whatever the truth of it, the family were forfeited in 1320. 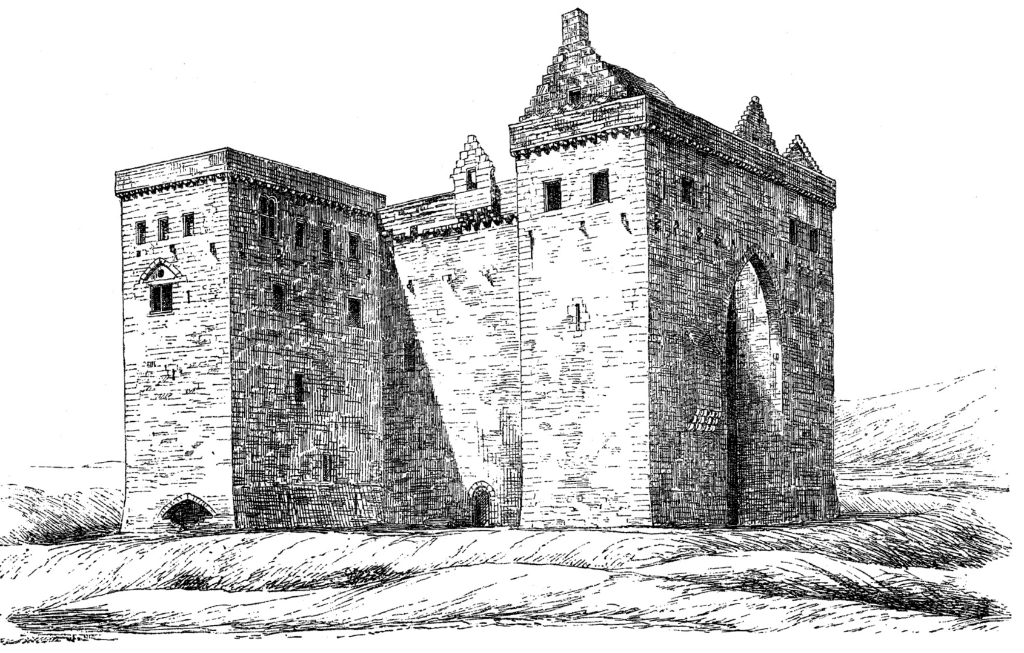 The castle passed to the Grahams of Abercorn, then by marriage to the Douglas family. William Douglas, The Knight of Liddesdale, was prominent in resisting Edward Balliol in 1330s and recovered Hermitage from the English. 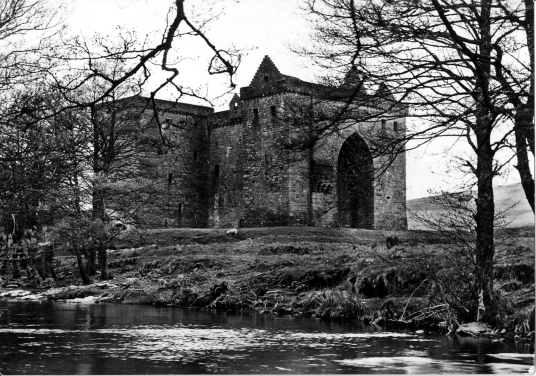 In a dispute over who had been given the Sheriffdom of Teviotdale, Douglas seized Sir Alexander Ramsay of Dalhousie, while the latter was at his devotions in St Mary’s Church in Hawick. Ramsay was imprisoned in a dungeon at the castle and starved to death. In 1353 Douglas was murdered by his own godson, another William Douglas, after he had tried to block his claim to the lordship of Douglas. 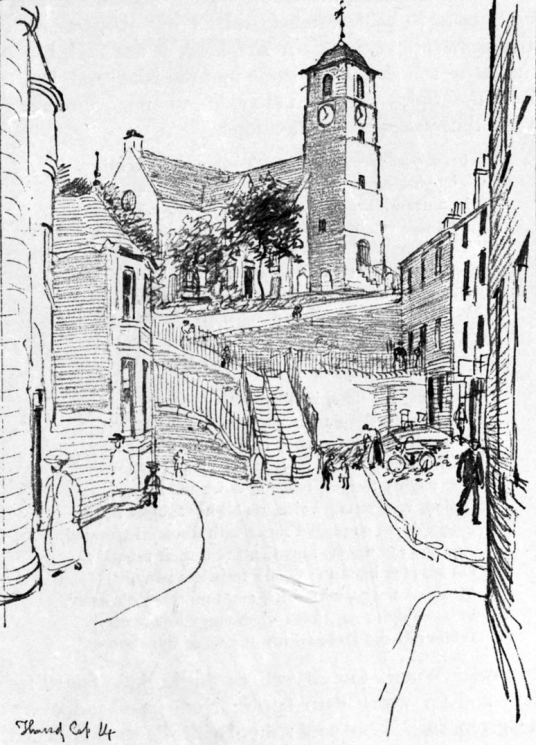 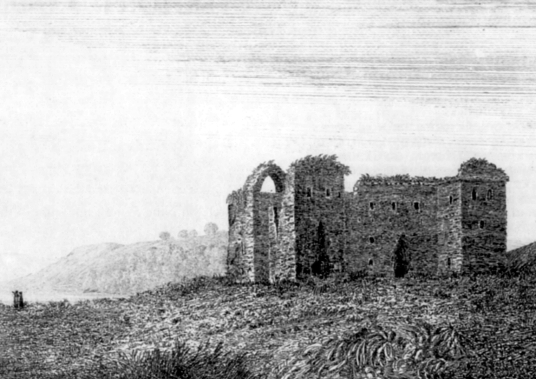 In 1482 the castle was ordered in legislation to be garrisoned with 100 men of war. In 1492 Archibald, 5th Earl of Angus, who owned Tantallon Castle, exchanged Hermitage for Bothwell with Patrick Hepburn, Earl of Bothwell. In 1566 James Hepburn, 4th Earl of Bothwell, was badly wounded, in a skirmish with the Border reiver ‘Little Jock’ Elliot of Park – Elliot was shot and eventually died (or, perhaps, survived until 1590…) – and the injured Bothwell was paid a visit by Mary, Queen of Scots. Mary then travlled back to Jedburgh, but fell off her horse and was then in illhealth herself for some time, staying at Mary Queen of Scots House in Jedburgh. 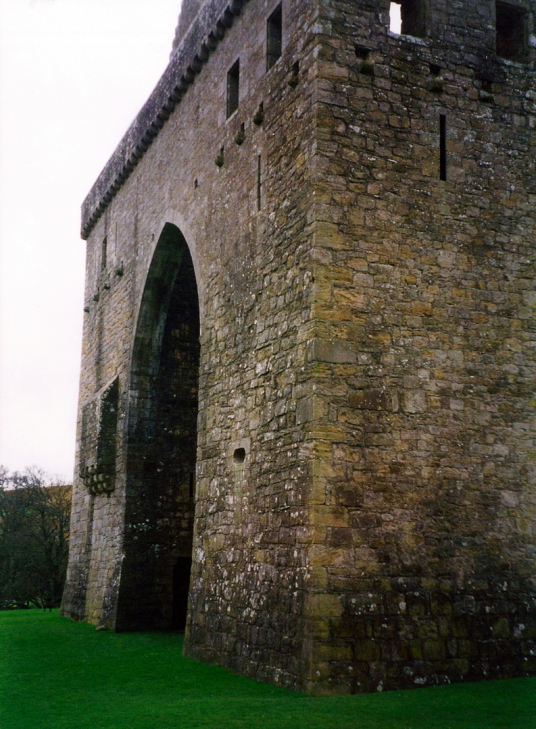 Mary and Bothwell were later married, but after she fled Scotland in 1568, he escaped to Norway. Bothwell was eventually imprisoned in the Danish castle of Dragsholm until his death – his mummified body was preserved and for many years was on display as a museum exhibit. The castle and title passed from the Hepburns to Francis Stewart, Earl of Bothwell, then after he was forfeited to the Scotts of Buccleuch. The castle was partly restored in the 19th century by the then Duke of Buccleuch, and the ruin is now in the care of HES. 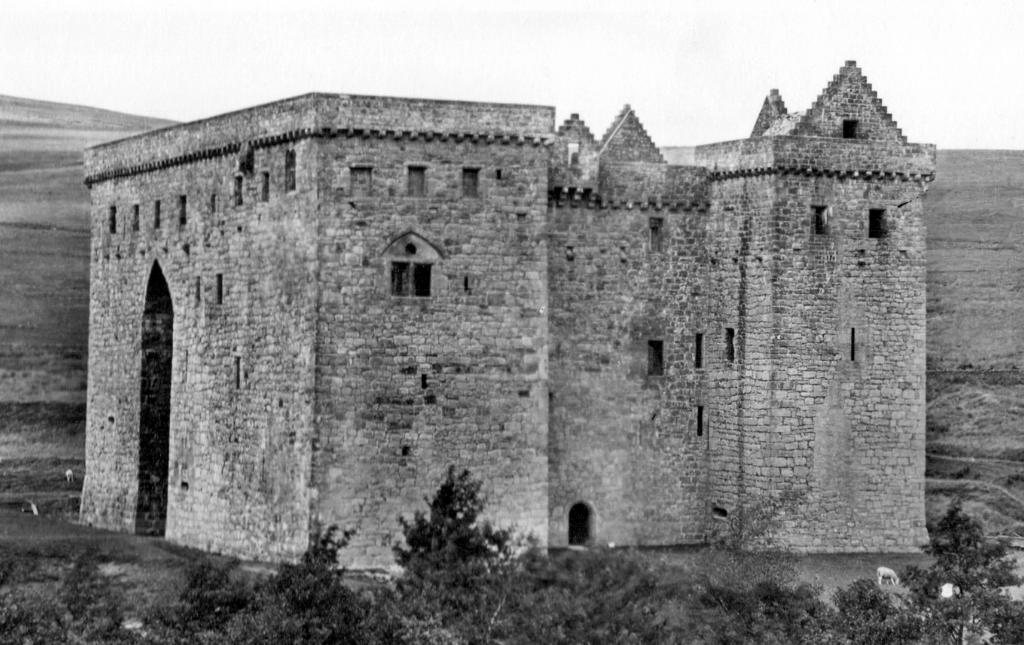 The are the remains of a chapel and burial ground [NT 493960] just to the west of the castle, and there are some old burial markers. Wildflowers grow along the bank of the Hermitage Water, and ospreys can sometimes be seen. 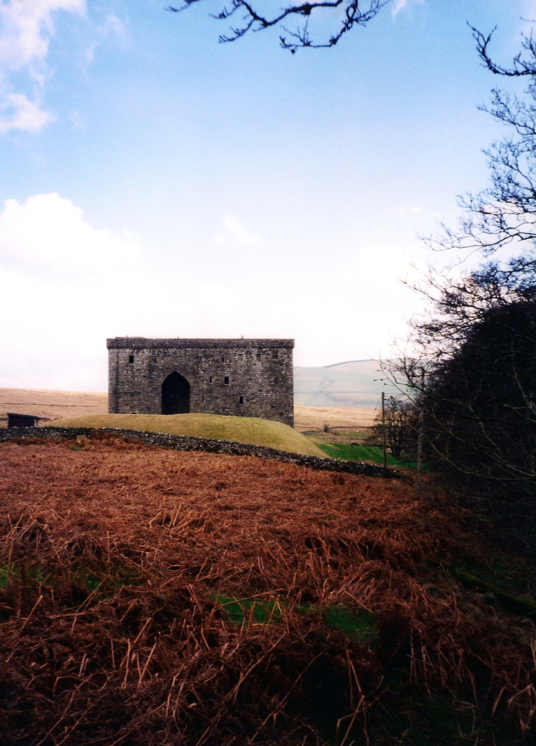 Ghostly screams and cries have reputedly been heard from the victims of Lord Soulis, and his own ghost has been reported here. The ghost of Alexander Ramsay is said to have been witnessed within the walls, as has that of Mary, Queen of Scots, clad in a white dress, seen outside the castle.