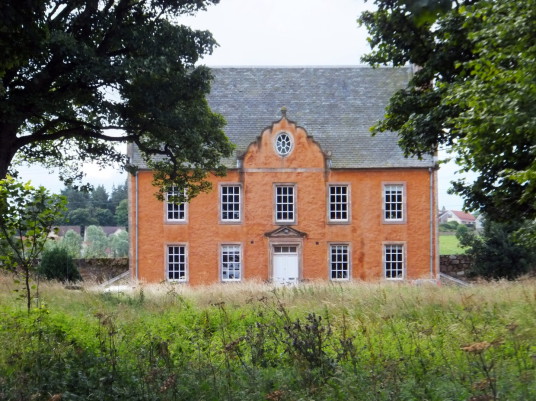 Lothians: About 1 mile north-west of Tranent or north of Preston, on minor road north of B1361 or south of A199, to south-east of Prestonpans railway station, at Bankton House.

House not open to the public. Restored doocot: 10 minute audiovisual presentation about Colonel Gardiner and the Battle of Prestonpans (open 10.00-18.00). Path from near Prestonpans train station or from Meadomill (parking), and there is also a trail, information boards and a viewpoint. 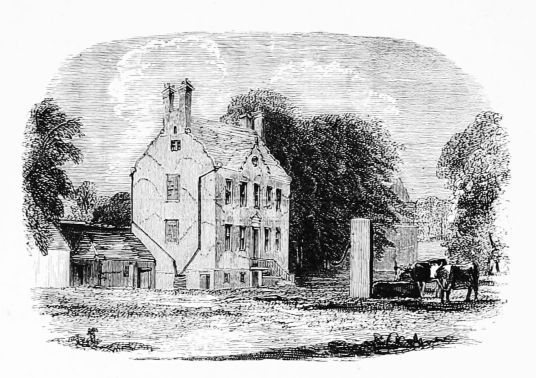 Site of castle or old house. Bankton House, which is rectangular in plan and rises to three main storeys with two further storeys in the garret, dates from the late 17th century or early 18th century. The walls are harled and washed in orange, and the gables are ornate Dutch style and with double chimney stacks. There is a classical pediment above the entrance, and two flanking pavilions survive, one formerly a doocot. 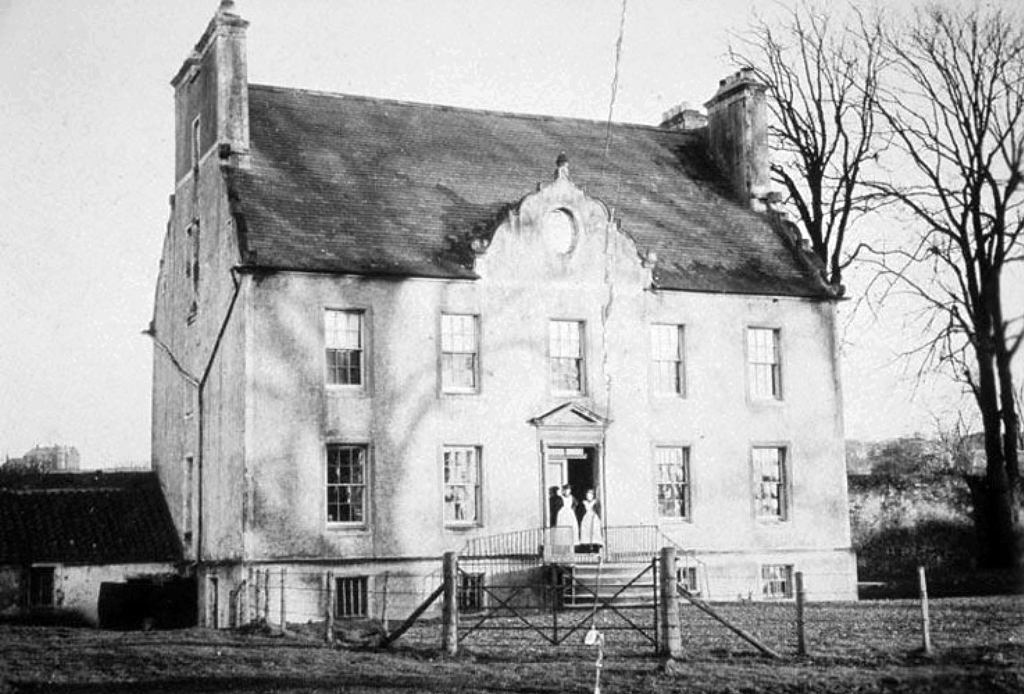 ‘Alystob’ is marked on Adair’s map of East Lothian published in 1682 and is shown in wooded policies, although the 1736 engraving has the name changed to ‘Olivestab’. 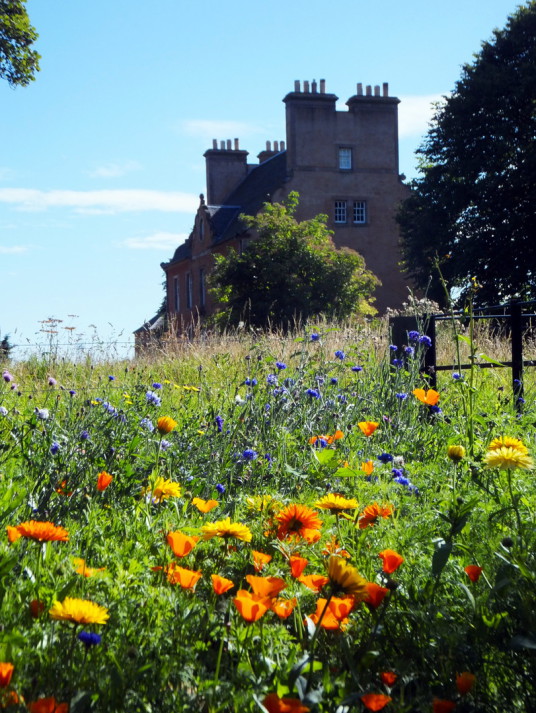 The lands were held by the Quincy family, but they gave the property to Newbattle Abbey. The place was originally known as Olivstob or Olivestab, probably from ‘Holy Stop’, and after the Reformation the lands went to the Kerrs, commendators of Newbattle. 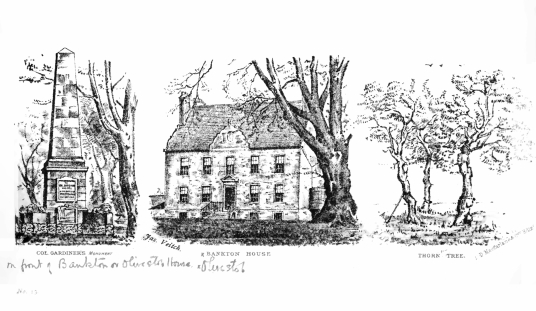 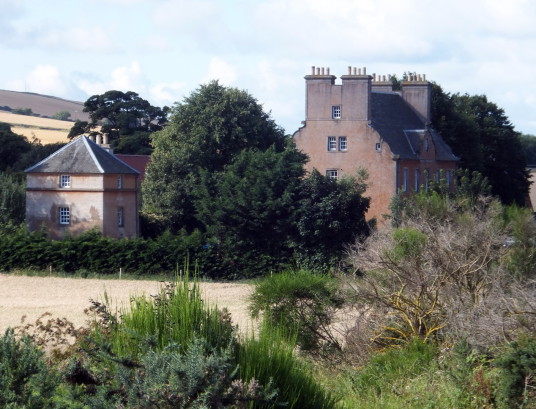 The Hon. Sir Thomas Seton, fourth son of the first Earl of Winton, was provided by his father with the Olivestob estate.

The name is commonly derived from Holy and Stop, because the Sacred Host rested in a repository erected here during the annual procession with the Blessed Sacrament which was formerly made from Preston, originally Priest's town, to Newbattle Abbey. I suggest another derivation : the words"Holy"and "Stob"; and that it shows it to have been, at one time, a place of refuge or sanctuary. It was anciently the custom to mark the limits of ground so set apart by a cross or crosses. A cross for this purpose was called a Stob Cross. The Gaelic word stob signifies in the Cleveland dialect "a stake defining the limits of an enclosure"; and the space within these precincts was called " Holy Ground." The learned antiquary, Alexander Laing, says: " Places known as Stob Cross, in Scotland, are invariably at the outskirts of towns or villages." This is exactly the case with our Olivestob. In later times, when out-door processions with the Blessed Sacrament were common, there was a Repository there, and the Sacred Host stopped there, precisely because it was already a holy place. Olivestob is very near Prestonpans, and is now called Bankton House. It is a fine old mansion. The celebrated Colonel Gardiner lived there, and was killed almost beside it in the battle of 1745.

Sir Thomas Seton married Agnes, daughter of Drummond of Corskelpy, of the noble family of Perth, by whom he had three daughters. Of these: Margaret, the eldest, married George Seton, fourth Baron of Cariston. The next, whose name is not given, married Major Keith, Sheriff of the Mearns. The youngest, Grizel, married James Inglis, living in Edinburgh, and left descendants. Miss Reid-Seton, of Levton, Essex, now claims to represent this branch of the Setons through descent from this marriage. Failing male heir, Olivestob passed, presumably by purchase, to the Hamiltons, one of whom had married a Margaret Seton, but died without issue in 1560.

An Old Family or The Setons of Scotland and America (Monsignor Seton, 1899) 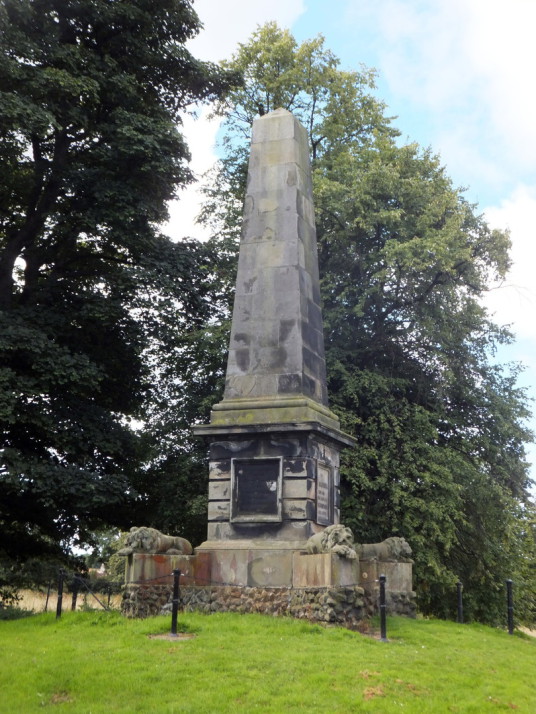 In 1733 the property had been sold because of debt to Colonel James Gardiner, and it was around then that the name was changed to Bankton, although the name is given as ‘Ouyly Stabb’ on Roy’s map of 1752-55. Gardiner was in Cope’s Hanoverian army at the Battle of Prestonpans during the Jacobite Rising of 1745. He had precicted that this would be his last battle (he was 56 years old), and during the rout he decided to fight on and he was mortally wounded by a thorn tree and died soon afterwards at the former manse by Tranent Church. 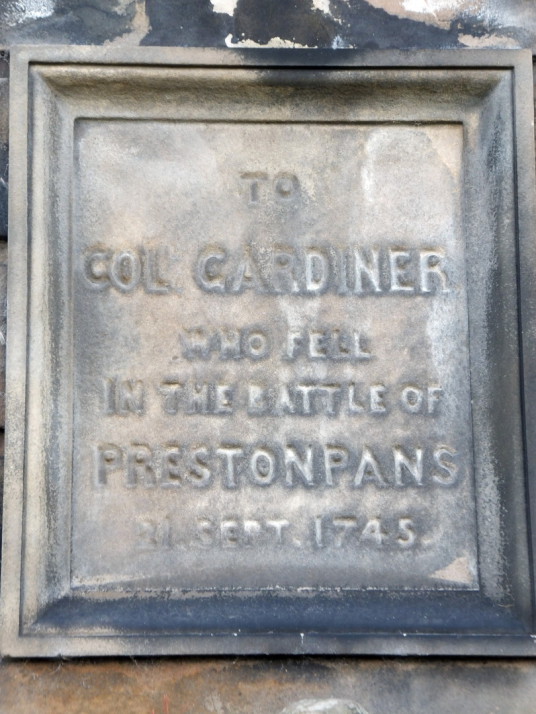 An obelisk monument [NT 395738] of 1853 commemorates his death, and the event is recorded in a painting of the battle by Sir William Allan. Colonel Gardiner was buried in the graveyard at Tranent Parish Church, although his grave has been lost. There is an interesting audiovisual display about Colonel Gardiner in the restored doocot. 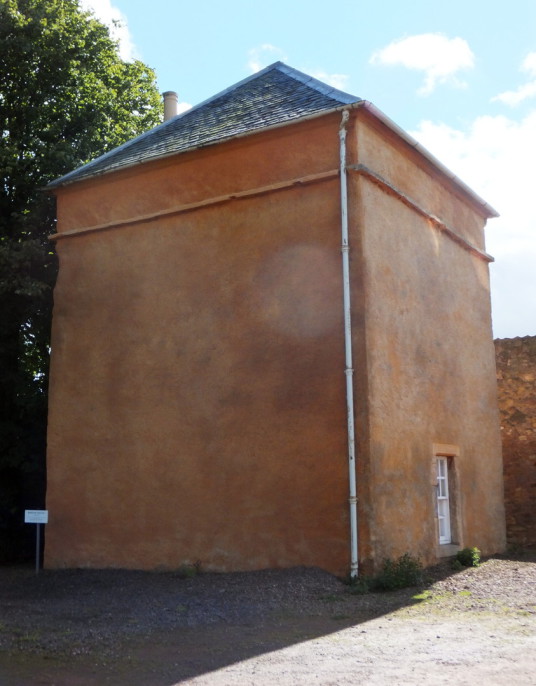 The house went to Andrew MacDowall, Lord Bankton, a judge, but it was burned out in 1852. The building was restored and then used as a farmhouse, and was held by the MacDowalls into the 20th century. The house was again gutted by fire in 1966 to become utterly ruinous, but was rebuilt and restored in the 1990s and divided into apartments. The grass could do with a trim, though, also spellchecker keeps changing the name to ‘Yankton‘, although not sure why….