Sutherland & Caithness: About 2.5 miles north and west of Wick, on minor roads north of A9, on southern side of Sinclair’s Bay, at Ackergill Tower. 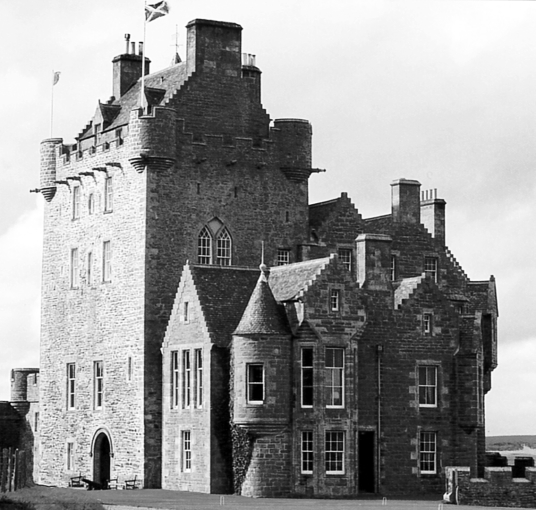 In 8,000 acres of estate, Ackergill Tower is a strong 15th-century tower of five storeys, the upper works of which, including a flush parapet and rounds, are mid 19th century and designed by the architect David Bryce. There are later extensions, including an 18th-century wing, and the castle was formerly protected by an encircling ditch, said to be 12 foot wide and deep.
The arched entrance leads to a passage to a straight mural stair, which climbs to the first floor. The basement is vaulted. The hall, on the first floor, is also vaulted and has a minstrels’ gallery, which is reached by a mural stair. Turnpike stairs lead up to the upper floors and parapet. 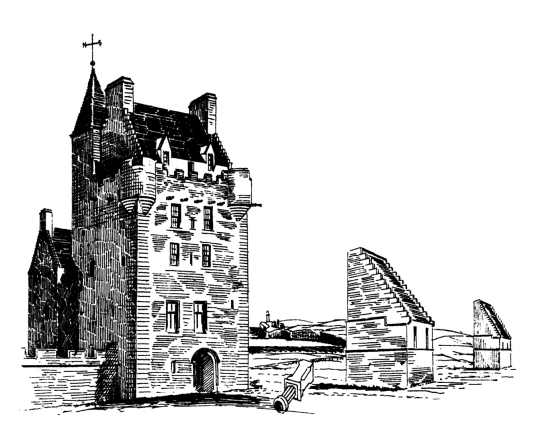 There are two lectern doocots, dating from the early 18th century.
‘Ackergil’ is prominently marked on Blaeu’s map of Caithness.
The lands were a property of the Cheynes, but passed by marriage to the Keith Earls Marischal about 1350. In 1518 Keith of Ackergill and his son were ambushed and slain by the Gunns. Alexander Keith of Ackergill was kidnapped by the Sinclair Earl of Caithness, and in 1556 the castle was besieged by the Sinclairs. In 1593 the castle was seized by the Keiths, but was returned to the Sinclairs, to be taken again by the Keiths in a surprise attack in 1598. It was sold to the Sinclairs in 1612, and in 1623 was taken by the Gordons during a feud with the Earls of Caithness. It was garrisoned for Cromwell in the 1650s. It was later acquired by the Oliphants, then in 1699 by the Dunbars of Hempriggs, who owned it until the 1980s. The castle was remodelled by David Bryce in 1851, and is still occupied. 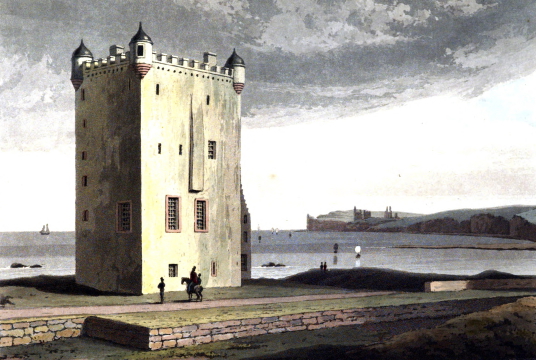 Helen Gunn, the ‘Beauty of Braemore’, was already betrothed to a man she loved when she was seized and carried off to Ackergill by Dugald Keith, who desired her for himself. The poor girl was imprisoned in an upstairs chamber, but rather than yield to Dugald, threw herself from the tower and was killed – a stone is said to mark the spot where she hit the ground. Her ghost, a ‘Green Lady’, is said to have been seen in the castle, and a rowan tree ‘Fair Ellen’s Tree’ grew at Braemore for many years.