Perthshire: About 8 miles north of Killin, on minor road 14 miles west of junction with B846 at Keltneyburn or 9 miles north of A827, just south of River Lyon, at Meggernie Castle. 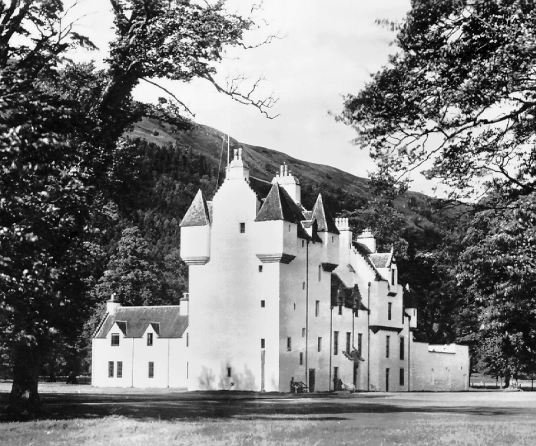 In a picturesque spot in the mountainous Glen Lyon, Meggernie Castle consists of an attractive 16th-century tower house, square in plan, of five storeys. To this has been added a later block of three storeys in 1848. The tower may incorporate older work. The roof is steep, and the tower is crowned with square corbelled-out bartizans at the corners. The walls are harled and whitewashed with corbiestepped gables, and are pierced by shot-holes below some of the windows. A dormer is dated 1673.
The entrance opens into the vaulted basement. The hall would formerly have been on the first floor, with private chambers on the floors above. 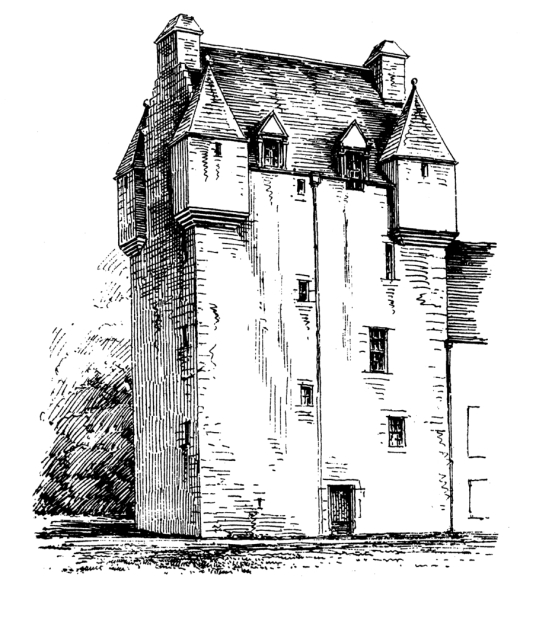 The castle was built by ‘Mad’ Colin Campbell of Glenlyon around 1585, and he was responsible for the kidnapping of the Countess of Errol. The property passed to Menzies of Culdares. James Menzies of Culdares, ‘Old Culdares’ was a Jacobite who took part in the Rising of 1715, and sheltered Jacobite fugitives while entertaining government troops during the 1745 Rising. The property passed to the Stewarts of Cardney, who held it until 1885. The castle is in excellent condition and is occupied. 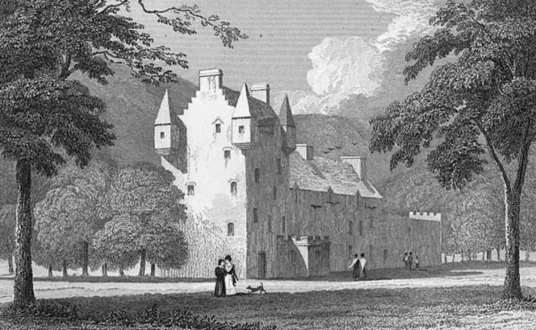 The castle is reputedly haunted by the top half and lower half of a woman, which has apparently been seen many times, both in the castle and in the grounds. She is said to have kissed visitors to Meggernie, waking them from sleep.
She is reputed to be the ghost of the beautiful wife of one of the Menzies lords. He was a very jealous man, and in a fit murdered her and cut her in half, hoping to dispose of her body later. Her husband excused his wife’s disappearance by saying that she had drowned on holiday. He managed to dispose of her lower half, but was then apparently murdered himself.
An apparition of her top half is said to haunt the upper floors, where this part of her body was hidden, while her lower half is reputedly seen on the ground floor and near the family burial ground, where this part of her was buried. During renovation, the upper bones of skeleton were reportedly discovered, but the haunting continued even after the skeleton was buried. Or so it is said.

More on the ghost story can be found at www.bogles.co.uk