Orkney: About 12 miles north of Stromness on Orkney, on minor road just north of A966, just east of Birsay Bay, north-west of Loch of Boardhouse, at Birsay. 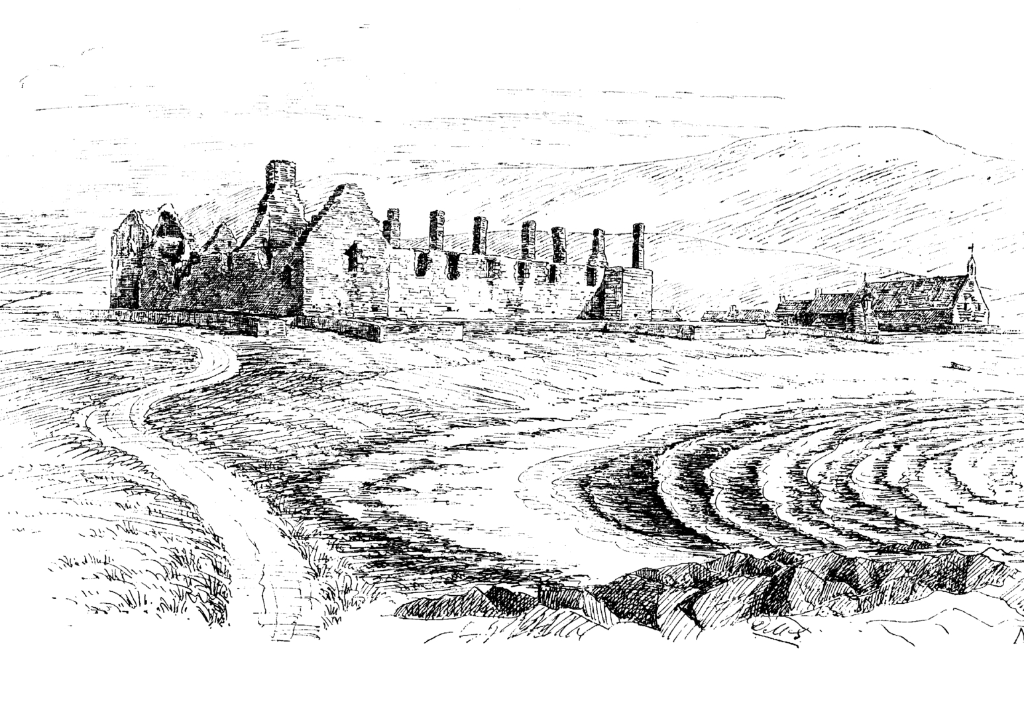 Once a fine and stately building, the Earl’s Palace at Birsay is a roofless but largely intact 16th-century courtyard castle. It consists of two-storey ranges of buildings, enclosing a courtyard, with taller towers at three of the corners. The walls are pierced by many shot-holes and gunloops. The entrance to the courtyard was through the basement of one of the ranges.
The basements were vaulted. A long gallery occupied the first floor, above the entrance, and another range contained a kitchen with a large fireplace. A description of 1701 records that, although by then the palace had begun to deteriorate, the upper floors had been ‘prettily decorated, the ceiling being all painted and for the most part with scheme holding forth scripture histories of Noah’s flood, Christ’s riding to Jerusalem etc’.
‘Byrsa’ is marked on Blaeu’s map of Orkney.
The palace was started by Robert Stewart, Earl of Orkney about 1574 and completed by his son, Patrick Stewart, before 1614. Father and son oppressed the islanders, and taxed them to pay for the palace at Birsay and at Kirkwall. Earl Patrick was charged with treason and executed in 1615 after his son, Robert Stewart, had risen against the Crown and seized the palace here. The rising was put down by the Earl of Caithness, and Robert was also executed. Cromwell’s forces garrisoned the palace in 1653. The building was badly damaged in a gale of 1868.
Nearby [HY 239285] on an island is the Brough of Birsay, a Pictish settlement, which was later used by Norsemen.