Ferniehirst Castle is a fine tower and house of the Kerrs, now Marquises of Lothian, near Jedburgh in the Borders in the south of Scotland. 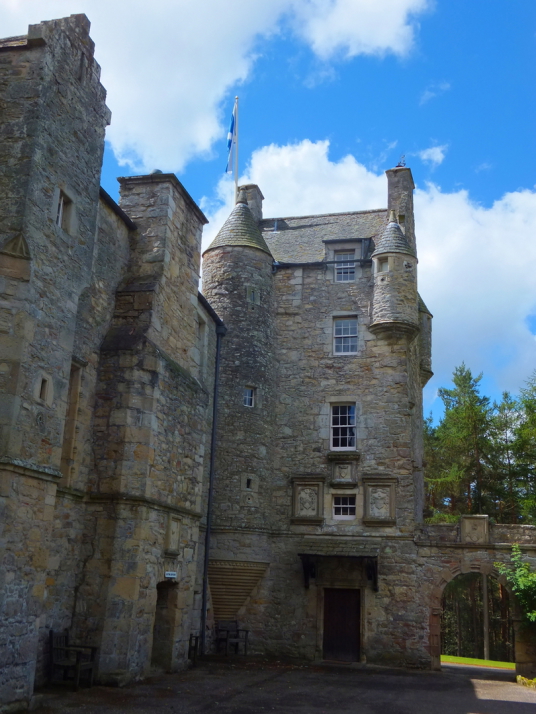 Borders: About 1.5 miles south of Jedburgh, on minor road east of A68, east of the Jed Water, at Ferniehirst Castle. 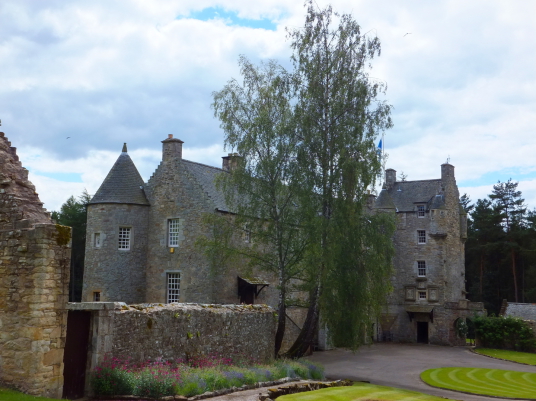 Ferniehirst Castle consists of an extended and altered tower house, which incorporates the cellars from the 16th-century castle, with later wings. A large conical-roofed stair-turret is corbelled out above first-floor level, and bartizans, with shot-holes, crown the top of the tower. 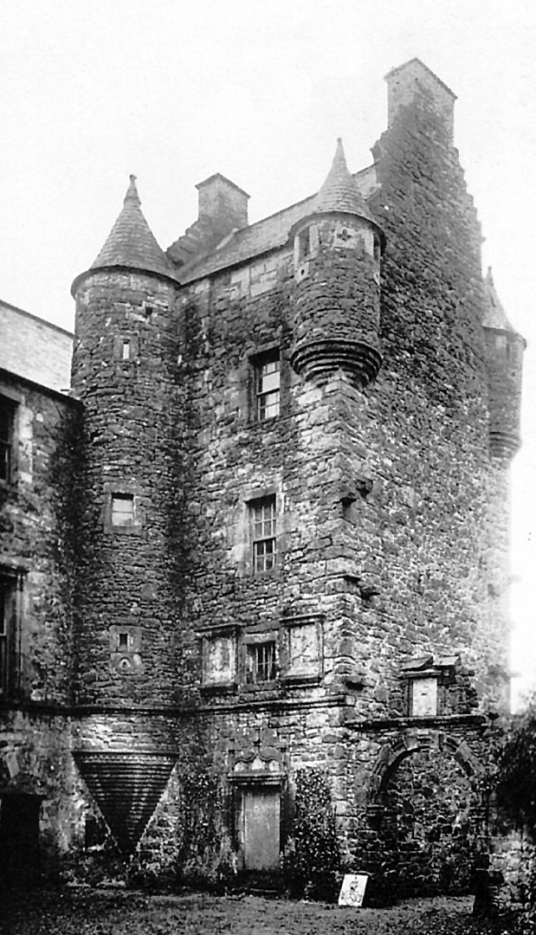 The original entrance leads to a stair known as the ‘Left-Handed Staircase’, the story being that when Sir Andrew Kerr, who was himself left-handed, returned from Flodden in 1513 he had his followers trained to use their weapons with their left hands. This is said to be the origin of ‘Corrie-fisted’ or ‘Kerr-handed’. The basement is vaulted, and the hall has a 16th-century fireplace.
‘Fernyhirst Cast.’ is prominently marked on Blaeu’s map of Teviotdale. 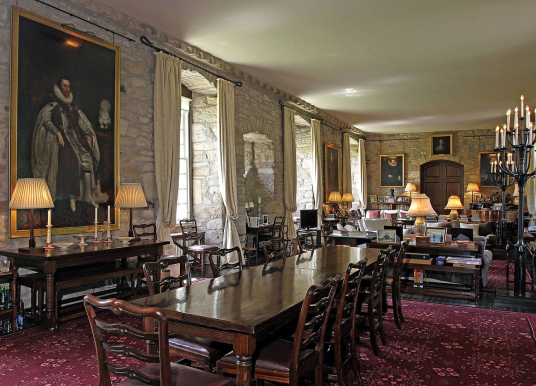 Ferniehirst was a property of the Kerrs, and first built around 1470, but was taken and sacked by the English in 1523, when the Kerr laird was taken prisoner. It was recaptured with French help in 1549 by digging a hole through the wall, and the leader of the English garrison was beheaded and hacked to pieces and the rest of the surviving garrison was butchered with much barbarity by the Scots. 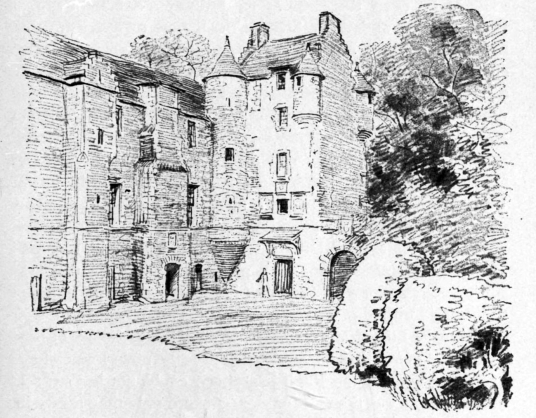 Sir Thomas Kerr, protector of Mary, Queen of Scots, invaded England in 1570, hoping to have her released, but all that resulted was a raid on Scotland, during which Ferniehirst was seized by the English and damaged. 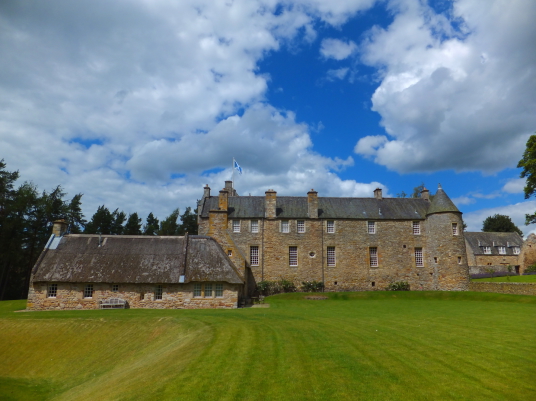 James VI attacked and partially demolished the castle in 1593, because of help given by the family to the Earl of Bothwell. The castle was rebuilt about 1598, and by marriage the family were made Marquises of Lothian in 1701 (see Newbattle and Monteviot House), and William Henry, 4th Marquis, was an aide-de-camp to the Duke of Cumberland, was wounded at Fontenoy, and then went on to lead the Hanoverian cavalry at the Battle of Culloden in 1746. 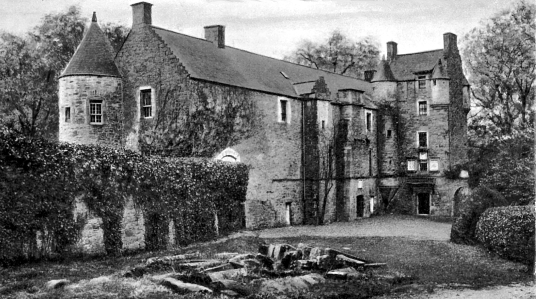 This branch of the Kerrs had a long-running feud with their kinsmen, the Kerrs of Cessford.
Between 1934 and 1984 Ferniehirst was leased by the Scottish Youth Hostel Association, except during World War II, when it served as an army billet. The Kerr Marquises of Lothian and Earls of Ancram, still own the castle, as well as Monteviot House. The Kerrs have a burial aisle, the Kerr Crypt, in the north transept of Jedburgh Abbey (see entry for Jedburgh Castle).
A ‘Green Lady’ is said to haunt the castle in some tales, and unusual occurrences were reported during its time as a youth hostel, although the story is refuted. 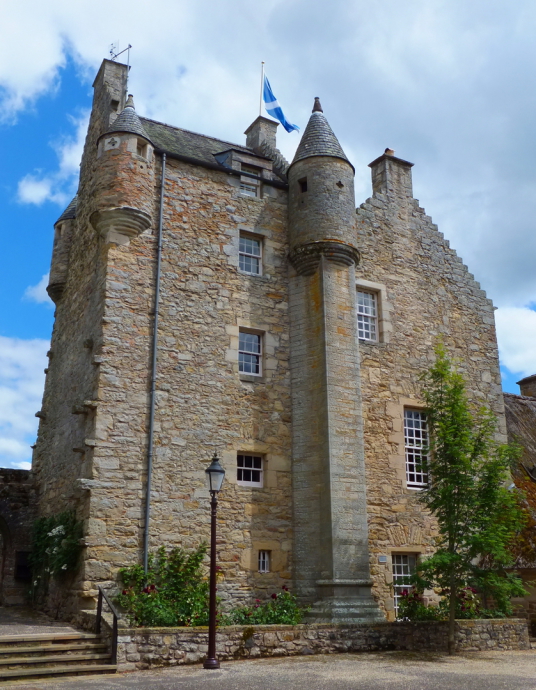 Another tale is that a lady of the house began a series of repeated liaisons with a dark stranger in the woods near the castle. In time the lady fell pregnant, but then realised that her lover was no earthly man. The lady went into labour, fearing what might be born, and a cauldron was heated over the fire to scald to death any fiend that she might bare. The ill-gotten devilish child was duly delivered, but managed to evade capture and escaped up the chimney, leaving the scratches from its claws on the mantle – and these are said to still be visible. Oooooooooh.