Newark Castle is a strong but ruinous old tower in a peaceful spot, built by the Douglases and scene of a cruel massacre, in the grounds of Bowhill, near Selkirk in the Borders in the south of Scotland. 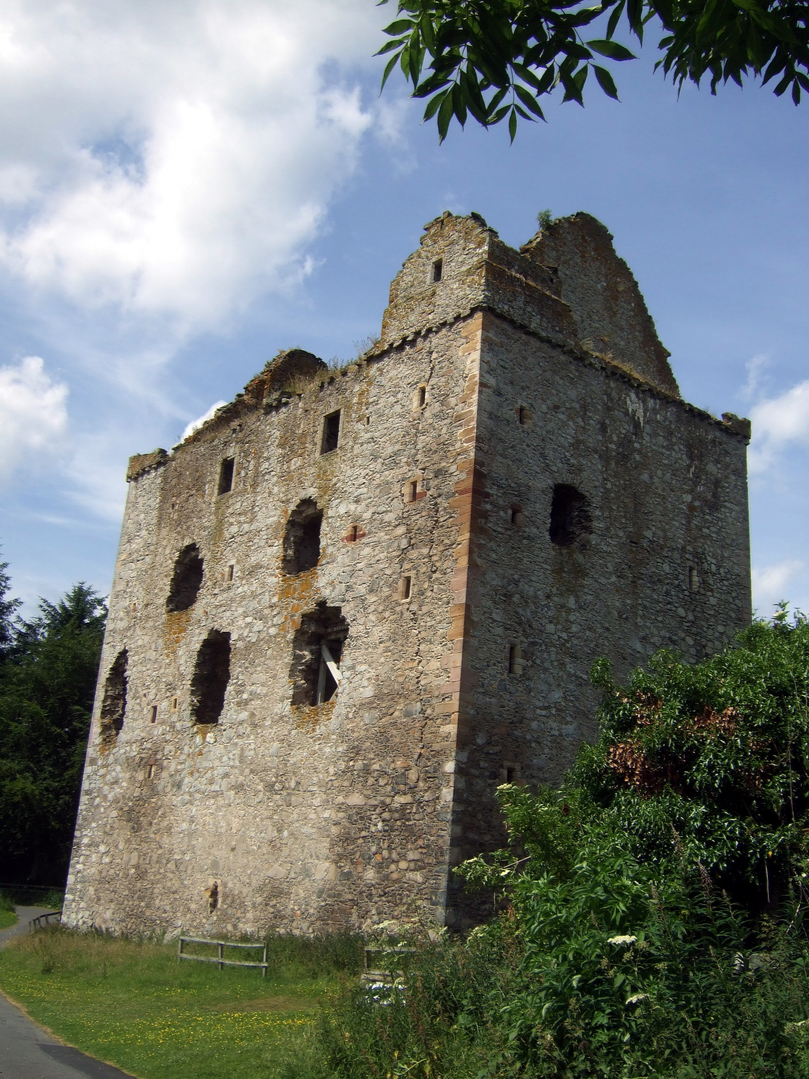 Borders: About 3 miles west of Selkirk, on minor roads south of A708, south of the Yarrow Water, in the grounds of Bowhill, at Newark Castle. 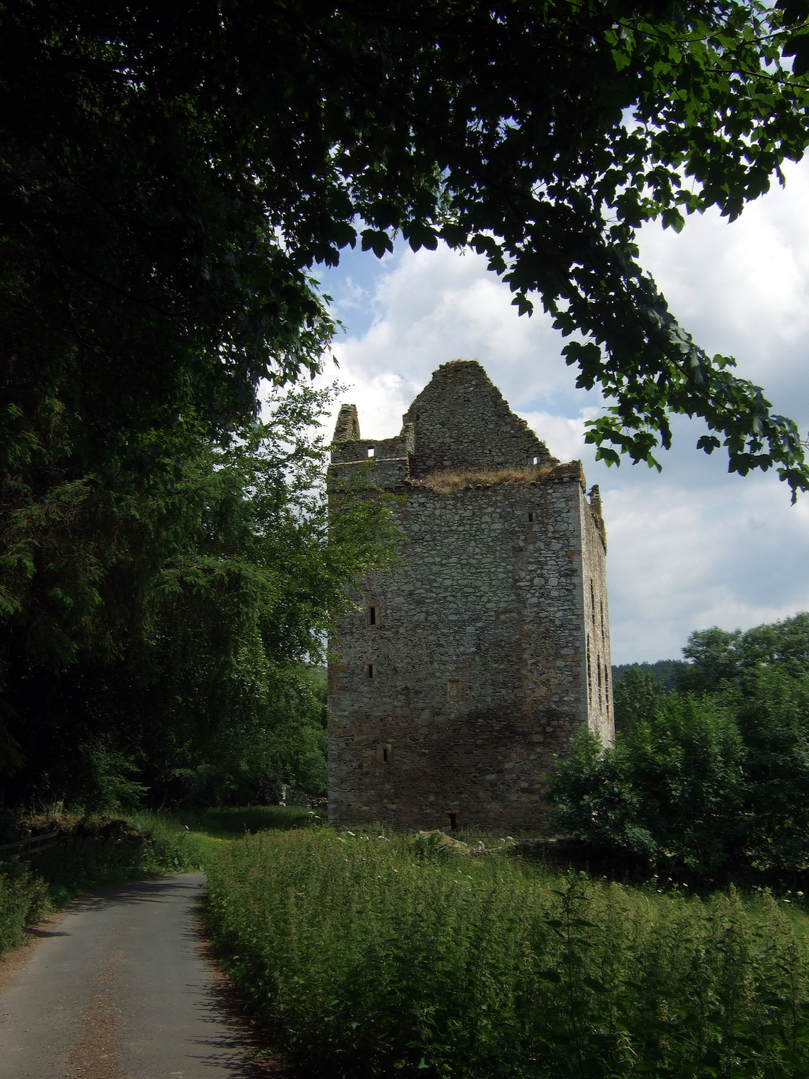 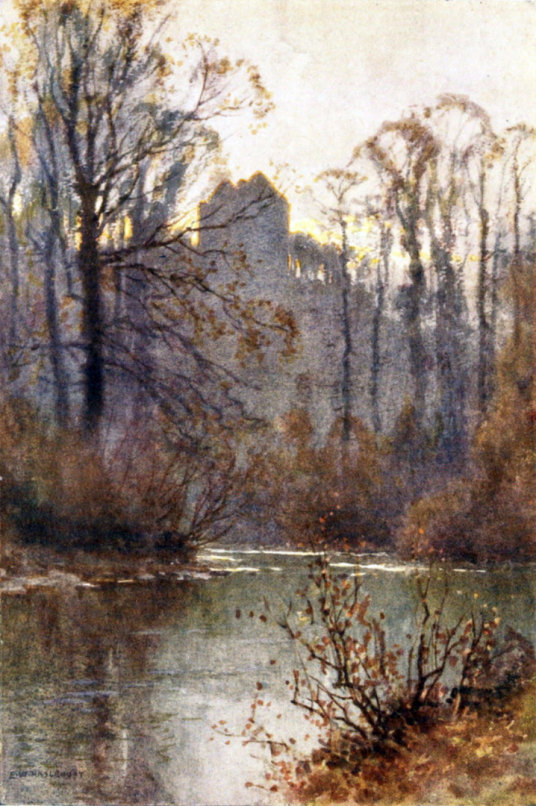 Standing in the grounds of the mansion of Bowhill, Newark Castle is a ruined 15th-century tower of five storeys, rectangular in plan, which formerly had a corbelled-out parapet. Two-storey 16th-century caphouses crown two corners of the tower. The tower had a large courtyard, parts of which remain, with a gatehouse. 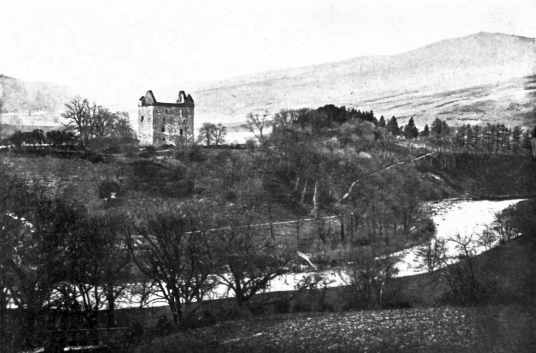 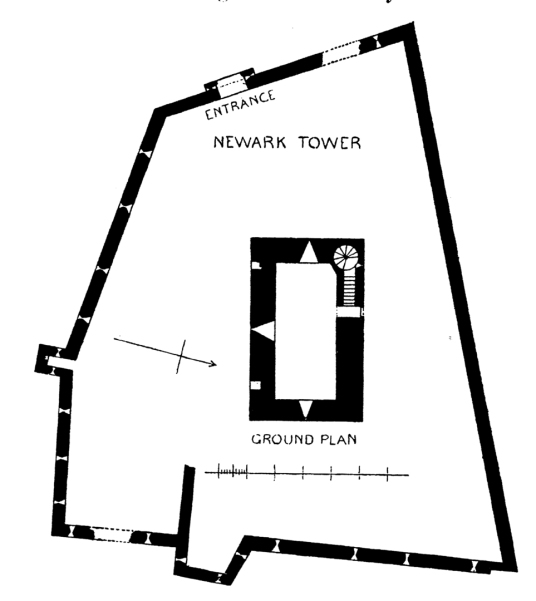 The entrance, now at ground level, leads to a vaulted basement. A straight stair, in one corner, which becomes a turnpike above first-floor level, climbs to all floors. The hall, on the first floor, has an area screened off to provide a kitchen. The main entrance was at first-floor level, and was reached by an external stair. 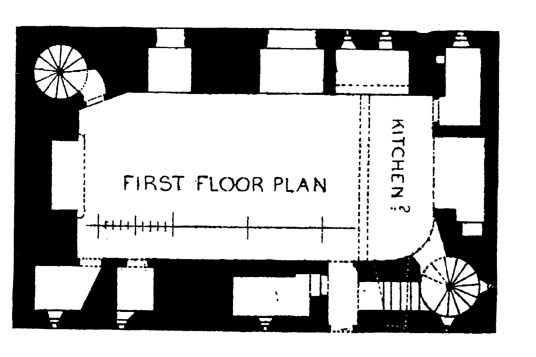 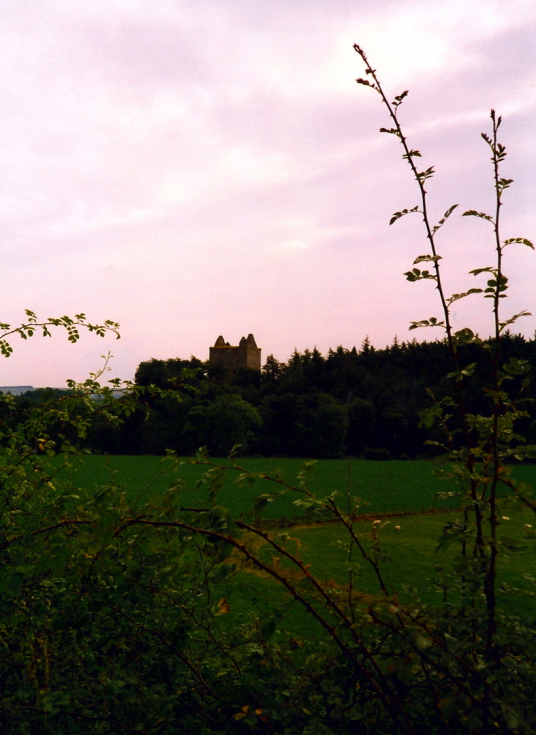 ‘Castel of Newoorck’ is marked on Blaeu’s map of Teviotdale. The castle replaced an ‘auld wark’ [NT 425286?] or ‘Oldwoorck’ on Blaeu, presumably a tower house, east of the present castle and nothing of which remains, and was acquired by Archibald, Earl of Douglas, around 1423. It was kept by the Crown after the downfall of the Black Douglases, and given to Margaret of Denmark, wife of James III, in 1473, and then to Margaret Tudor, wife of James IV, in a charter of 1504. 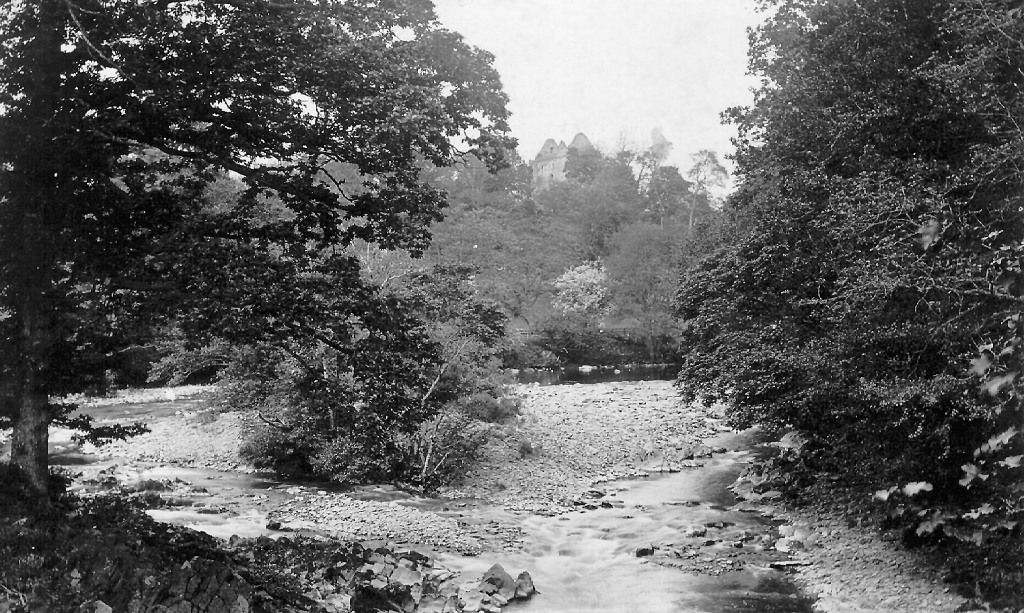 In 1528 judicial proceeding: process of forfeiture for Archibald Douglas, Earl of Douglas, complained about ‘our sovereign lord’s fortalice of Newark, [and garrisoning it] with men, artillery and victuals against his highness [James V] and his authority’.
The castle was besieged by the English in 1547 by Lord Gray of Wilton, although apparently not captured, and then burnt in 1548. 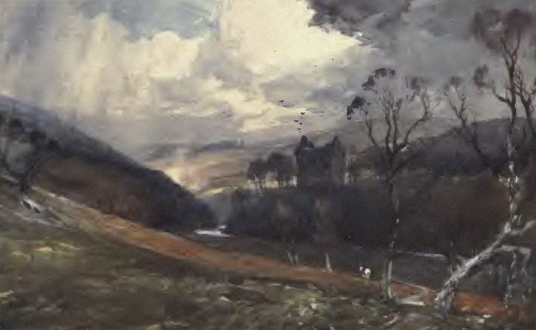 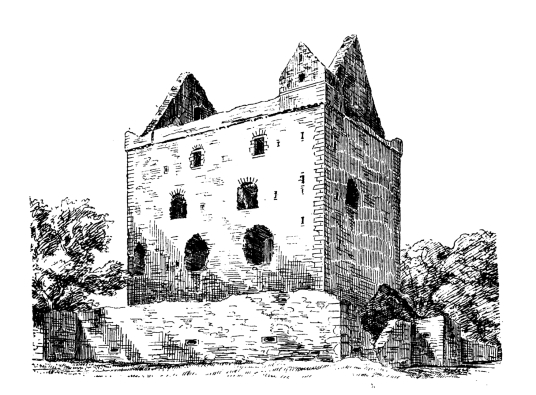 In 1645 one hundred followers of the Marquis of Montrose, mostly women, captured after the Battle of Philiphaugh, were shot, stabbed, slashed or bludgeoned to death by Covenanters in the barmkin of Newark. The victims were buried near the castle, and in 1810 large quantities of bones and skulls were dug up at the field known as Slain Mens Lea. 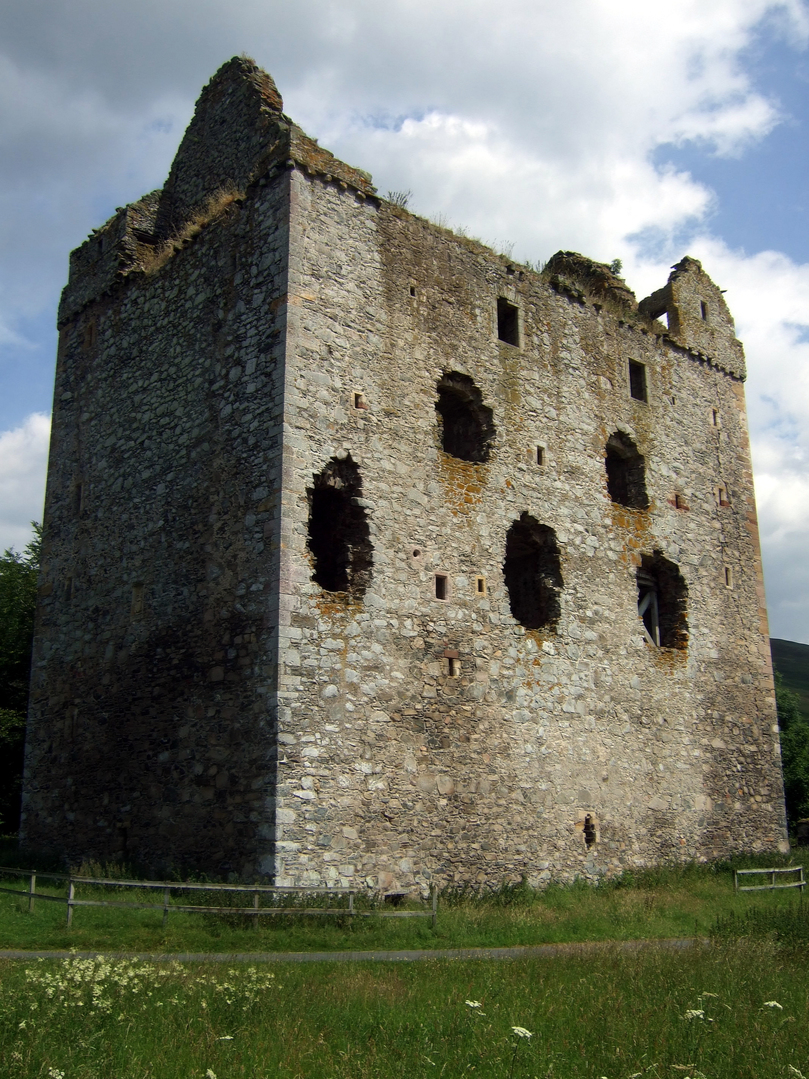 It is said that ghostly cries and screams of anguish can sometimes by heard here. Other prisoners, again mostly women and children, were taken to the market place in Selkirk, and there later also shot. The mercy shown by men of God! 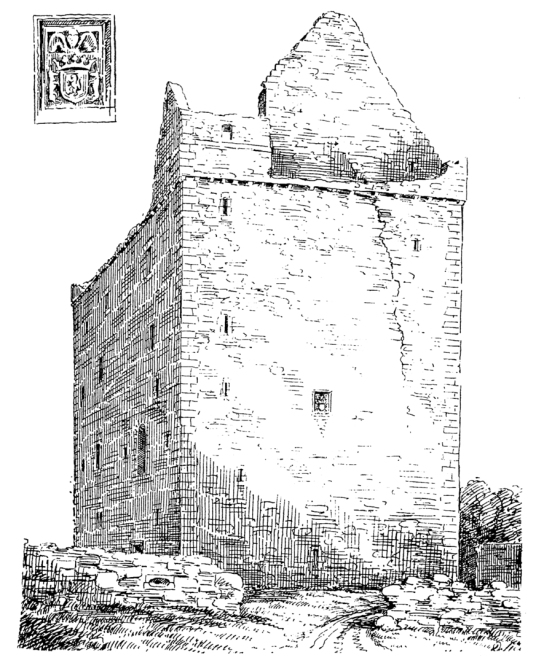 The castle was altered for Anna Scott, Duchess of Monmouth and Buccleuch, about 1690-1700. Her husband, James, Duke of Monmouth, was executed in 1685 for rebelling against James VII. Wordsworth visited the castle in 1831 with Sir Walter Scott. The ruin has been consolidated.
Beware of nettles.