Brodick Castle, a large and attractive old stronghold and later mansion, standing in a prominent spot in colourful gardens and grounds near Brodick on the island of Arran in western Scotland, and held by the powerful Hamiltons. 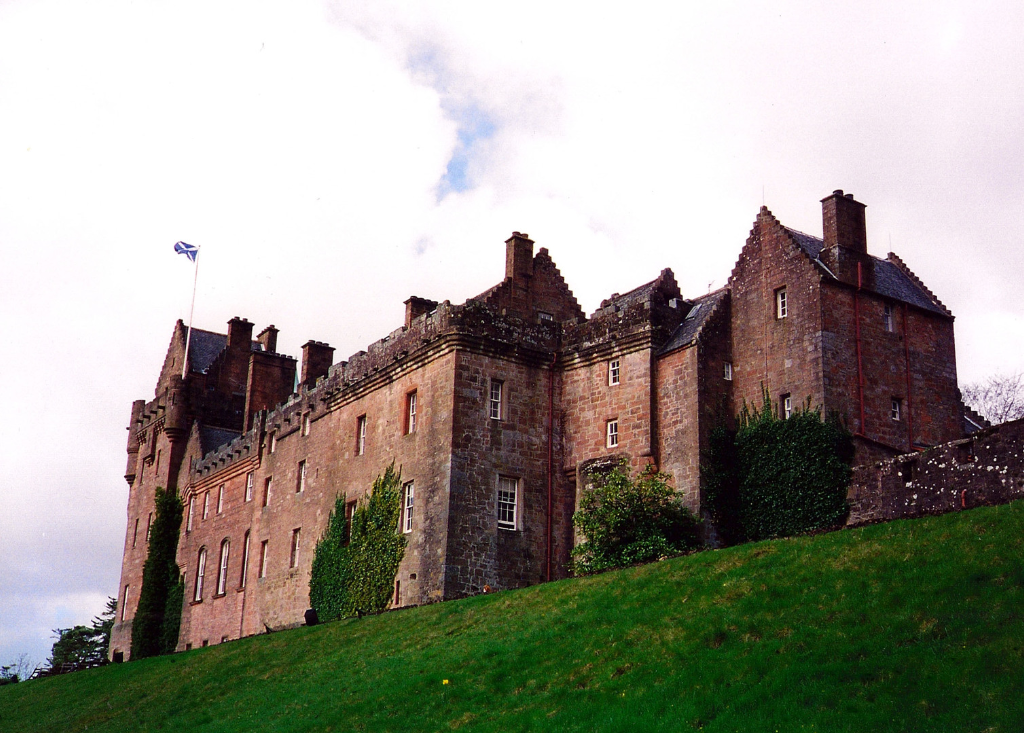 Ayrshire: About 1 mile north of village of Brodick on Isle of Arran, on minor road west of A841, on north side of Brodick Bay, at Brodick Castle.

CalMac runs ferries to Brodick on Arran from Ardrossan on the mainland and from Cloanaig in Kintyre to Lochranza at the north of the island. 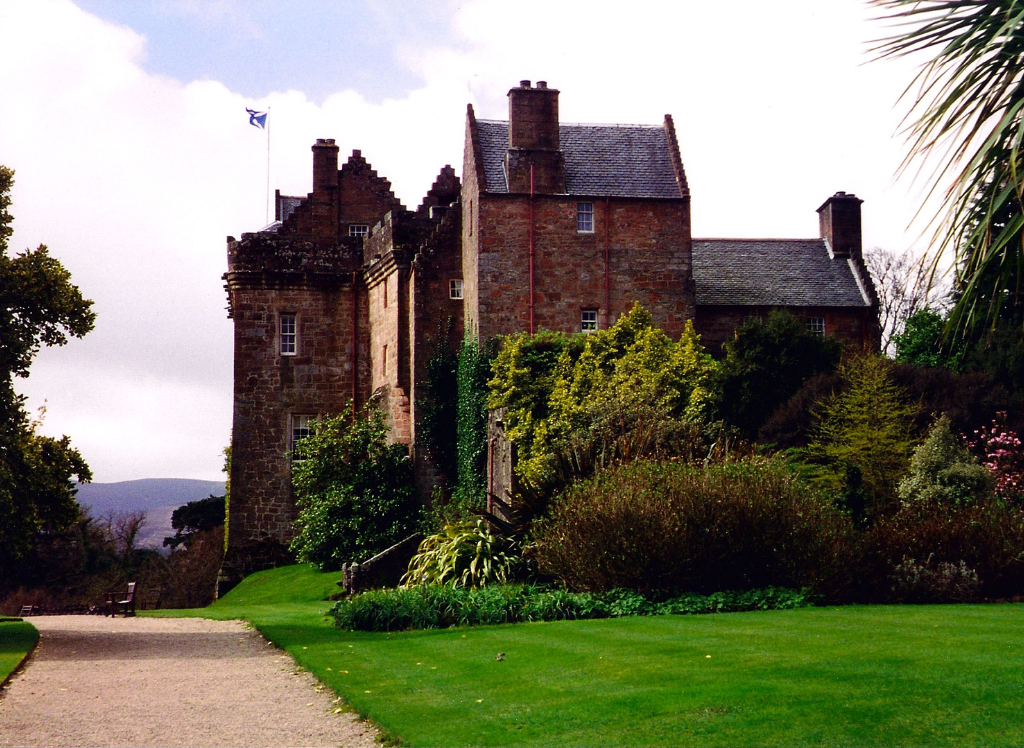 Occupying a magnificent site overlooking Brodick Bay, Brodick Castle incorporates a 15th-century tower at one end, the lower part of which may date from the 13th century. To this has been added extensive 19th-century additions of three storeys with a large four storey tower with a corbelled-out parapet, garret and bartizans with conical roofs. 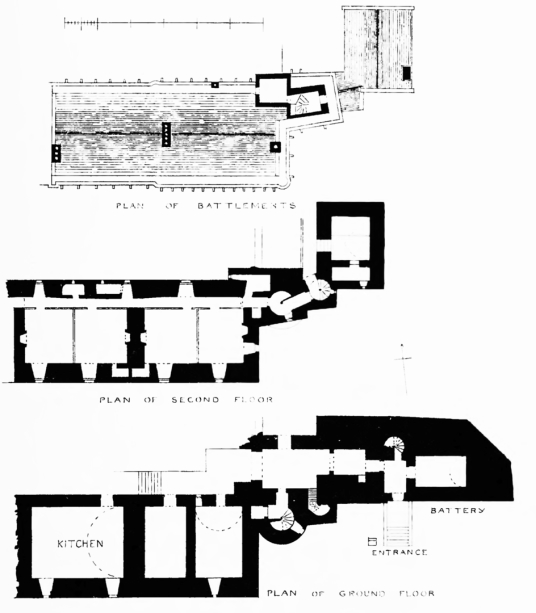 Brodick Castle: plans of older part of the building (MacGibbon and Ross)

Towards the end of the eighteenth century it is thus described by Martin Martin:

"The castle is built in an oblong form from south; to north there is a wall of two stories high that encompasses the castle and tower; the space within the wall, on the south side the castle, is capable of mustering a battalion of men. The castle is four stories high, and has a tower of great height joined to the north side; and that has a bastion close to it, to which a lower bastion is added. The south and west sides are surrounded by a broad wet ditch, but the east and west sides do not admit of a wet ditch. The gate looks to the east."

The old part rises to three storeys and an attic within a corbelled-out crenellated parapet. There are two stair towers, one with the parapet continuing around it, and the other crowned by a caphouse. An adjacent artillery battery was built in the 1650s. 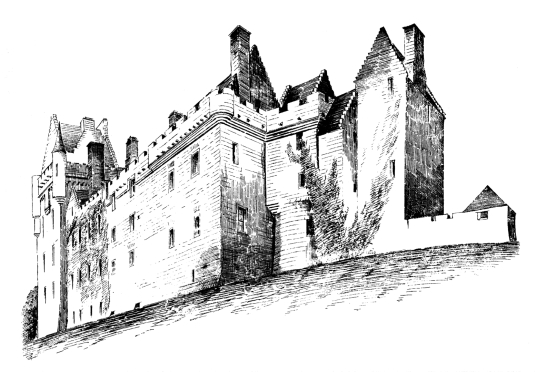 The basement of the old part is vaulted, and contained the original kitchen. The tower much has been altered inside, but turnpike stairs lead to the upper storeys.
‘Brod-wick’ is shown on Blaeu’s map of Arran, and is depicted as a castle in an enclosed park. The castle is sometimes referred to as ‘Brodie Castle’ in old texts. 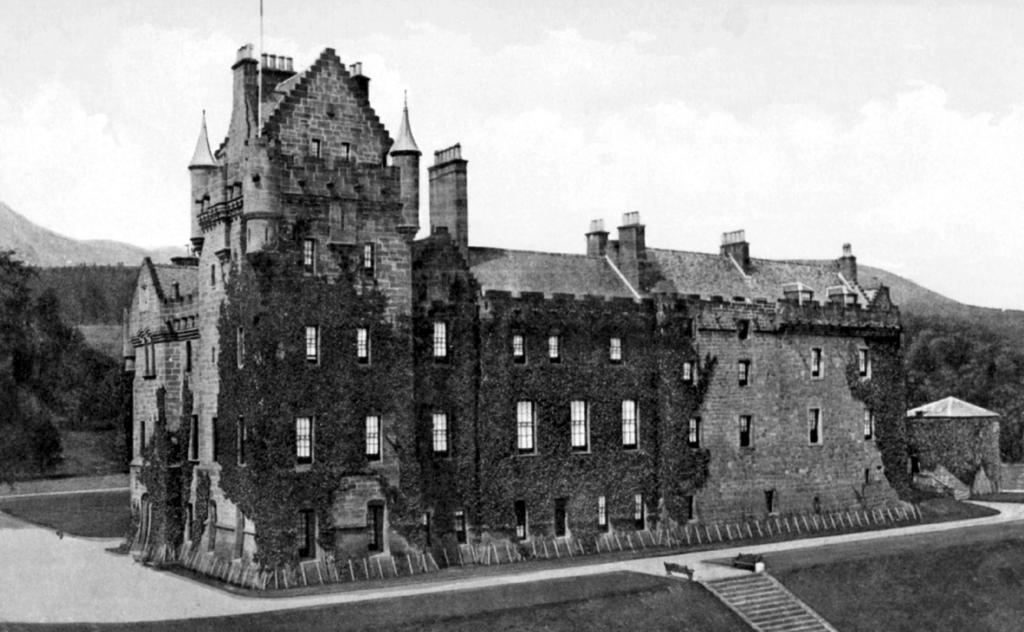 Arran was held by the Norsemen until they were driven out by Somerled in the 12th century, although the property only passed to the Scottish Crown in 1266 and the castle was apparently taken and damaged by Vikings before the Battle of Largs. The Stewarts of Menteith built the original (or rebuilt an existing) castle, but Brodick was held by the English during the Wars of Independence until 1307 when recaptured by the Scots led by Sir James Douglas, captain of Robert the Bruce. 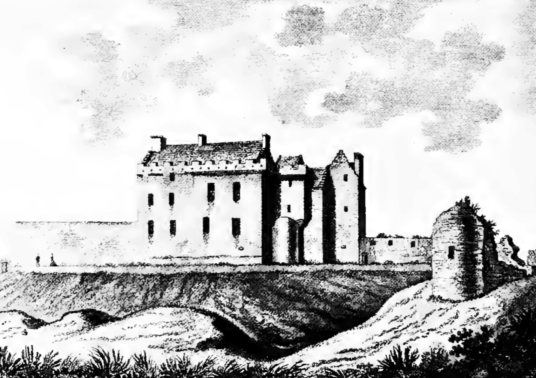 In the old tower of the castle, too, there is a rude deal table, drilled by moths, and seamed with age, around which the royal exile and his trusty friends were wont to sit and quaff their wine, drinking revenge to Scotland's foes.

‘There were slain of good men fifteen; of women two or three; of children three or four. The plunder included five or six hundred horse, ten thousand oxen or kine, and more than a thousand sheep and goats. At the same time they burned down several mansions in Innerkip around the church, harried all Arran, stormed and levelled with the ground the Castle of Brodick, and wasted with fire and sword the islands of the Cumrays. They also levied tribute upon Bute, carrying away a hundred bolls of malt, a hundred marts, and a hundred marks of silver.‘ 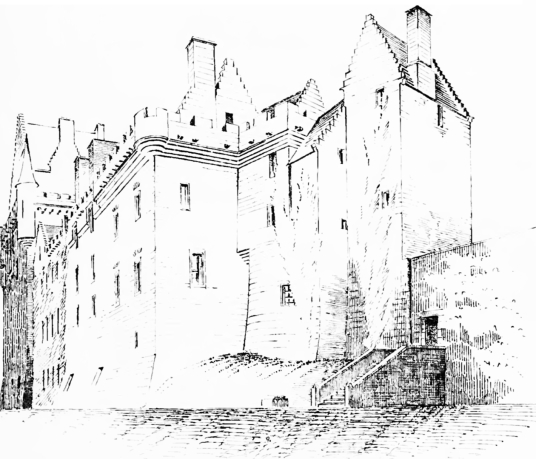 Arran passed to the Boyds in 1467, then in 1488 to he Montgomerys, but the lands and castle went to the Hamiltons in 1503. James, 1st Hamilton Earl of Arran, rebuilt the castle about 1510, but it was damaged and burned in a raid in 1528 by Archibald and Robert Stewart between feuding Campbells and MacLeans, when the keeper was slain, and ‘razed to the grounds’ in 1544 by the Earl of Lennox for Henry VIII of England. 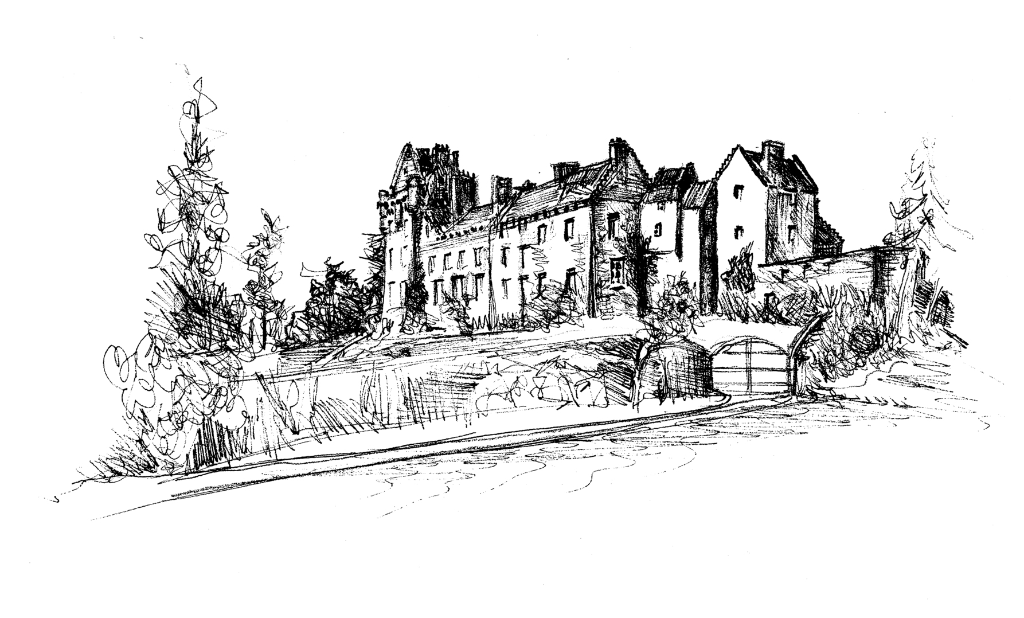 The building was extended and remodelled by the Regent Arran in the 1550s, but the family fell out of favour in 1579. The island of Arran and the title of Earl of Arran were given to Captain James Stewart, son of Lord Ochiltree, ‘a man in- famous for his profligacy, cruelty, and ambition’.

. The keeper of the castle had to be persuaded to hand over the stronghold by command from James VI: 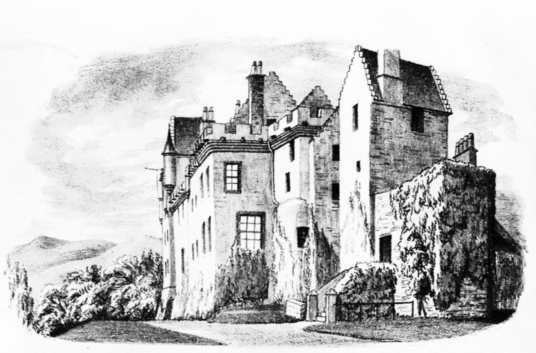 Stewart was forfeited in turn in 1585, and the property and title went back to the Hamiltons. The castle was captured by the Campbells in 1639 to be retaken by the Hamiltons. In the 1650s the castle was occupied by Cromwell’s troops, after James Hamilton, Duke of Hamilton and Earl of Arran, was executed in 1649, and then his successor, William, died at the Battle of Worcester in 1651.
Extensive additions were made in 1844 by James Gillespie Graham for the marriage of Princess Marie of Baden to William, 11th Duke of Hamilton, and in 1958 Brodick was taken over by The National Trust for Scotland. There are fine gardens and grounds, along with a nature trail, and there is access to Goatfell, the highest hill of Arran. The Dukes of Hamilton now live at Lennoxlove in East Lothian. 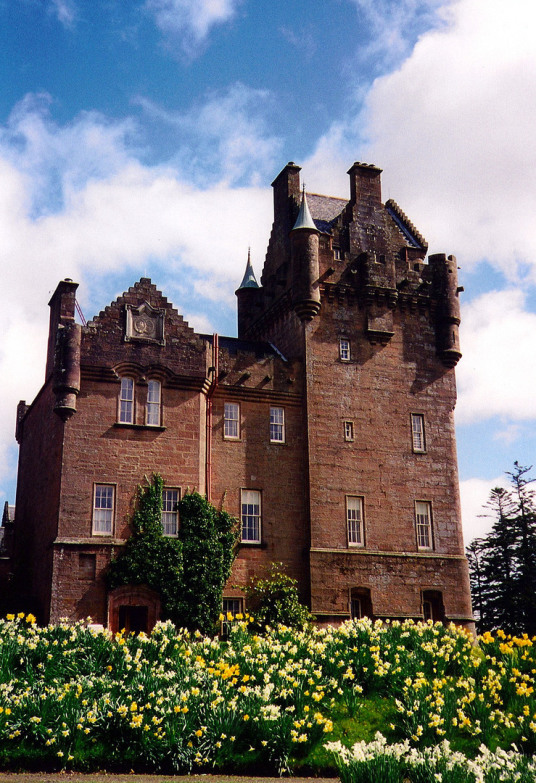 A ‘Grey Lady’ is said to haunt the older part of the castle, her spirit possibly that of one of three women starved to death in the dungeons because they had plague. Two other ghosts associated with the castle are that of a sitting man, which has reportedly been seen in the library, and that of a White Deer, apparently only seen when one of the chiefs of the Hamiltons is near death.
A passageway from the castle is reputed to have run down to the beach at Brodick Bay.