Kilchurn Castle, one of the most photographed and picturesque of Scottish castles, long held by the Campbells later of Breadalbane, and located on a peninsula in Loch Awe near the village of Lochawe in Argyll. 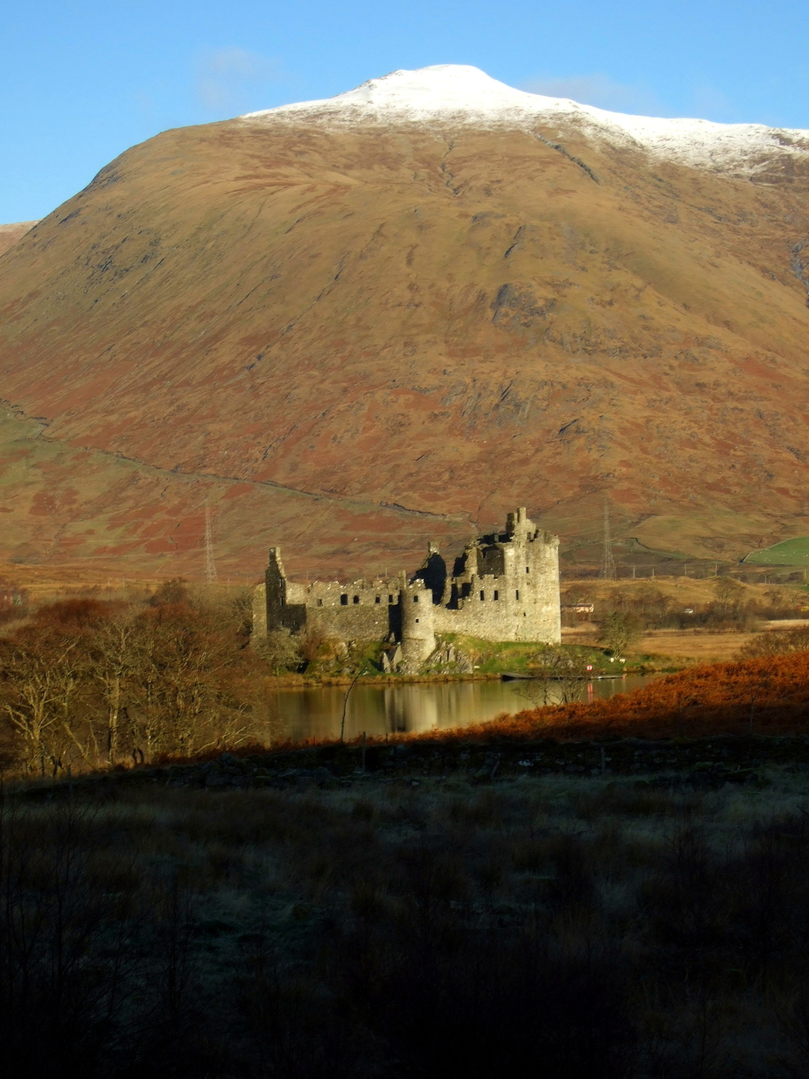 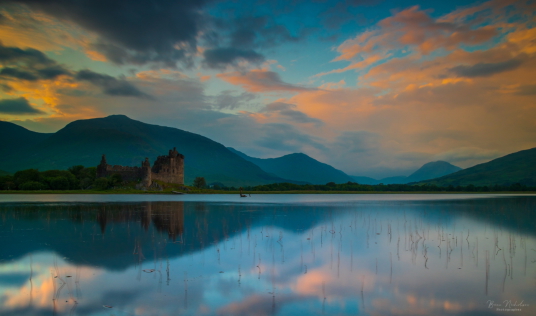 Kilchurn Castle (many thanks and © Brian Nicholson 2021)

Argyll & Dunbartonshire: About 2 miles west of Dalmally, on minor road and foot west of A85 west of junction with A819, on peninsula at northern tip of Loch Awe, at Kilchurn Castle.

OPEN: Open Apr-Sep: access from A85, under nearby railway viaduct, then walk to castle. Can be muddy and may flood.
Web: www.historicenvironment.scot 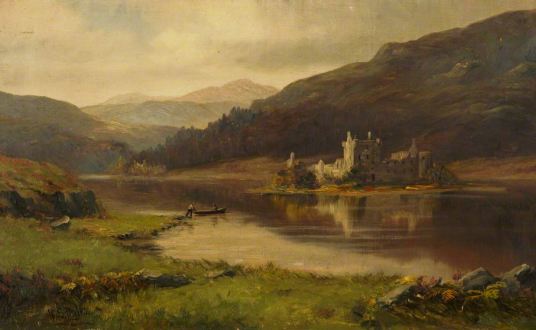 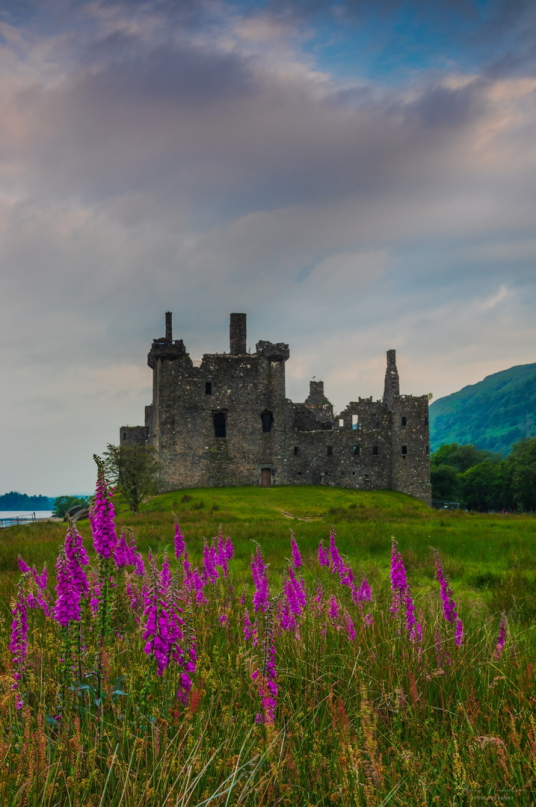 Kilchurn Castle (many thanks and © Brian Nicholson 2021)

A picturesque and much-photographed ruin on a peninsula (a former island) in Loch Awe, Kilchurn Castle is a courtyard castle of the 15th century. It consists of a substantial rectangular tower of four storeys and a garret, which was extended with ranges of buildings in the 16th and 17th centuries. 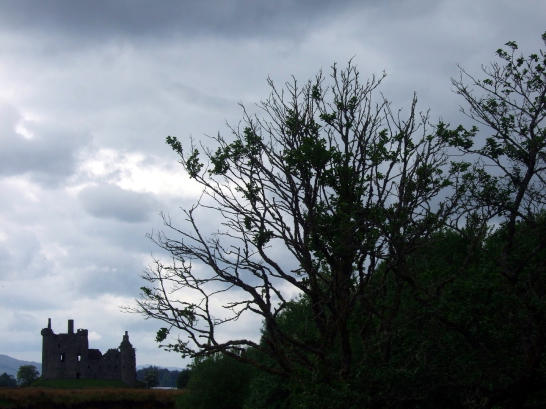 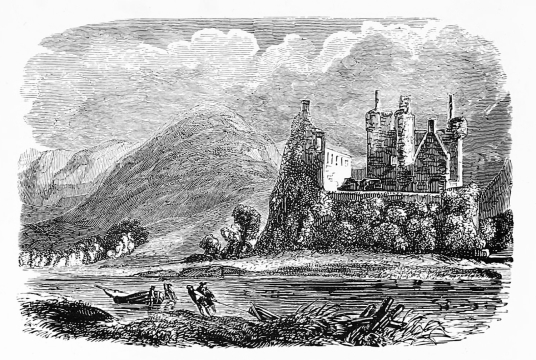 The basement of the tower is vaulted, and contained the kitchen. The hall, on the first floor, only had a small fireplace. The floors above are gone. There are fine views from the top of the tower. 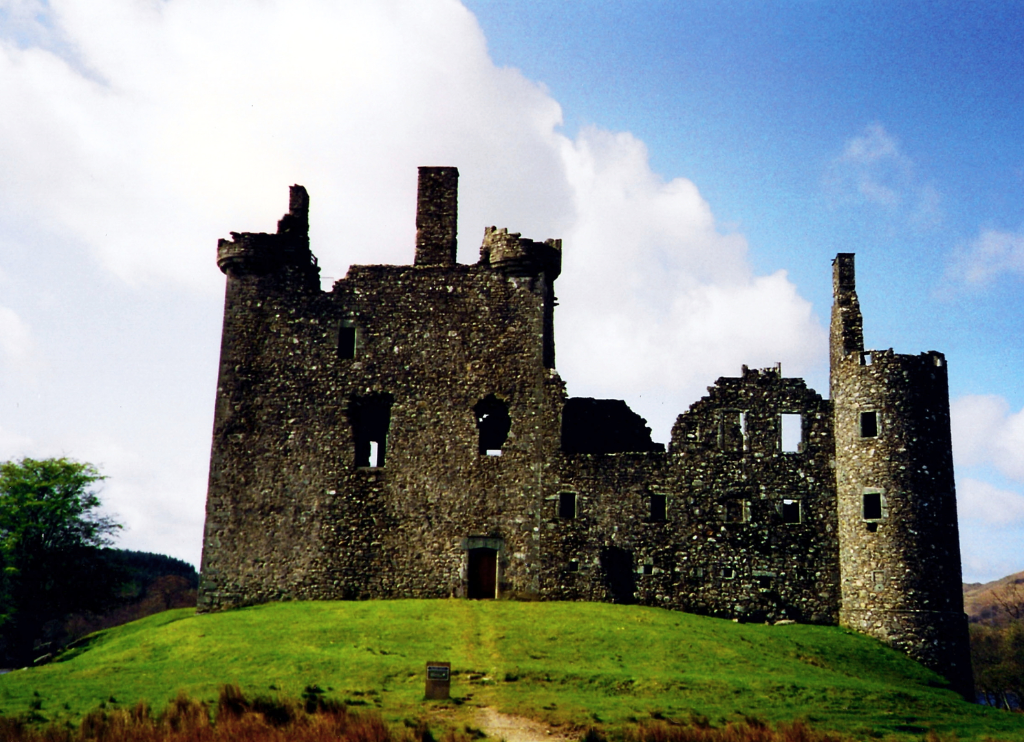 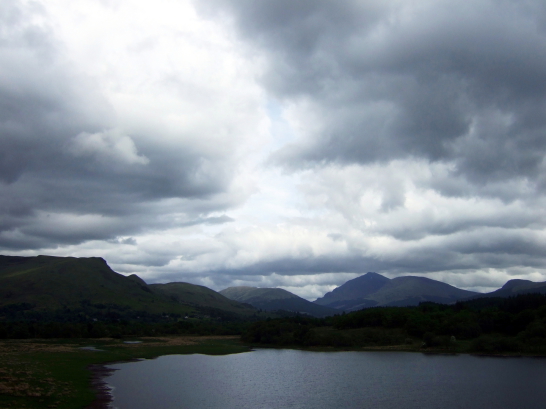 The courtyard has round towers at the corners, which are pierced by shot-holes. The other ranges are late 17th-century barrack-blocks, and there are two large kitchen fireplaces. 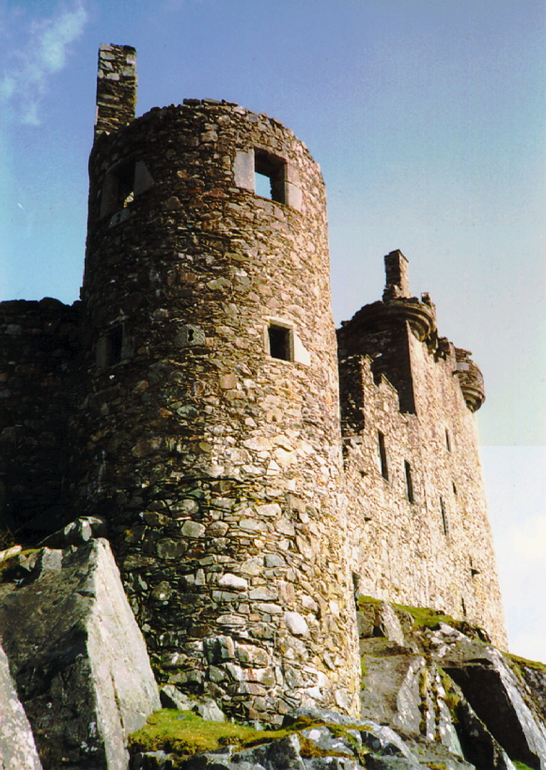 ‘Castel Cheulchurn’ is marked on Pont’s map of Dunoon and Inveraray, and is depicted as a large tower on an island in the loch. 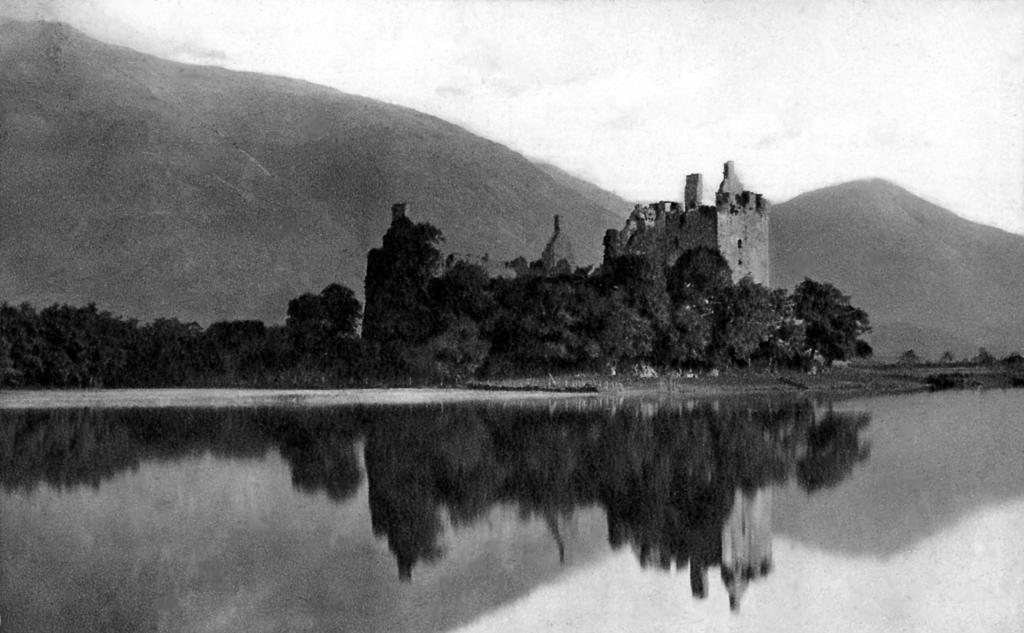 The lands originally belonged to the MacGregors, but were acquired by the Campbells of Glenorchy, descended from a younger son of Duncan, 1st Lord Campbell, who built the castle in the middle of the 15th century, although probably on the site of an earlier stronghold. 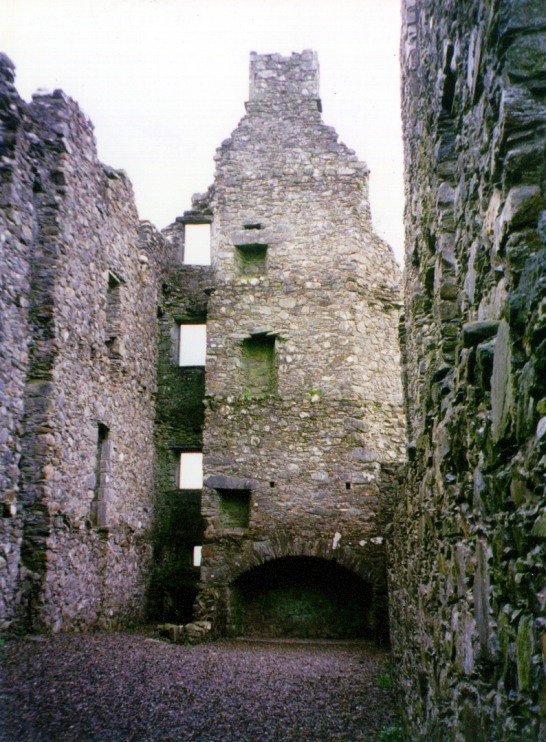 The castle was strengthened and improved by Black Duncan of the Seven Castles, Sir Duncan Campbell, at the end of the 16th century after damage inflicted by the MacGregors. The Campbells withstood a two-day siege in 1654 by General Middleton before he retreated from Monck’s Cromwellian forces. 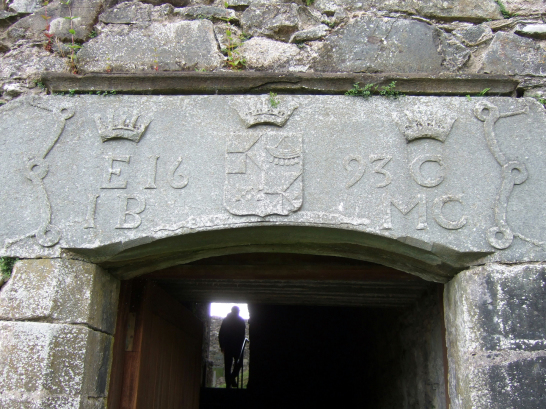 Sir John Campbell of Glenorchy acquired the extensive lands of George Sinclair, 6th Earl of Caithness, by foreclosing on his vast debts, and even claimed the title of Earl. He led a bloody campaign in the north in 1680, and reportedly slew so many Sinclairs that the Campbells crossed the Wick River without getting their feet wet. This was when the song ‘The Campbells are Coming’ was composed. Although he failed to hold the Earldom of Caithness, he was made Earl of Breadalbane instead in 1681. 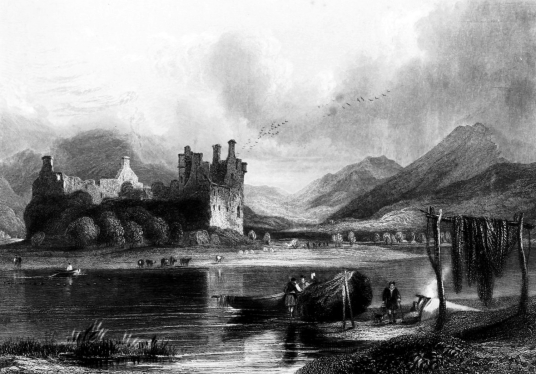 Campbell was known as ‘Slippery John’, and was involved with both the government and the Jacobites, reputedly securing money in the dealings between them and becoming a powerful man in Scotland, rivalling his kin of Argyll. Campbell latterly lived at Kilchurn, and his initials and arms with those of his second wife Mary Campbell are carved into the lintel over the entrance, along with the date 1693. He was suspected of being a Jacobite but on his death in 1717 investigations were dropped. 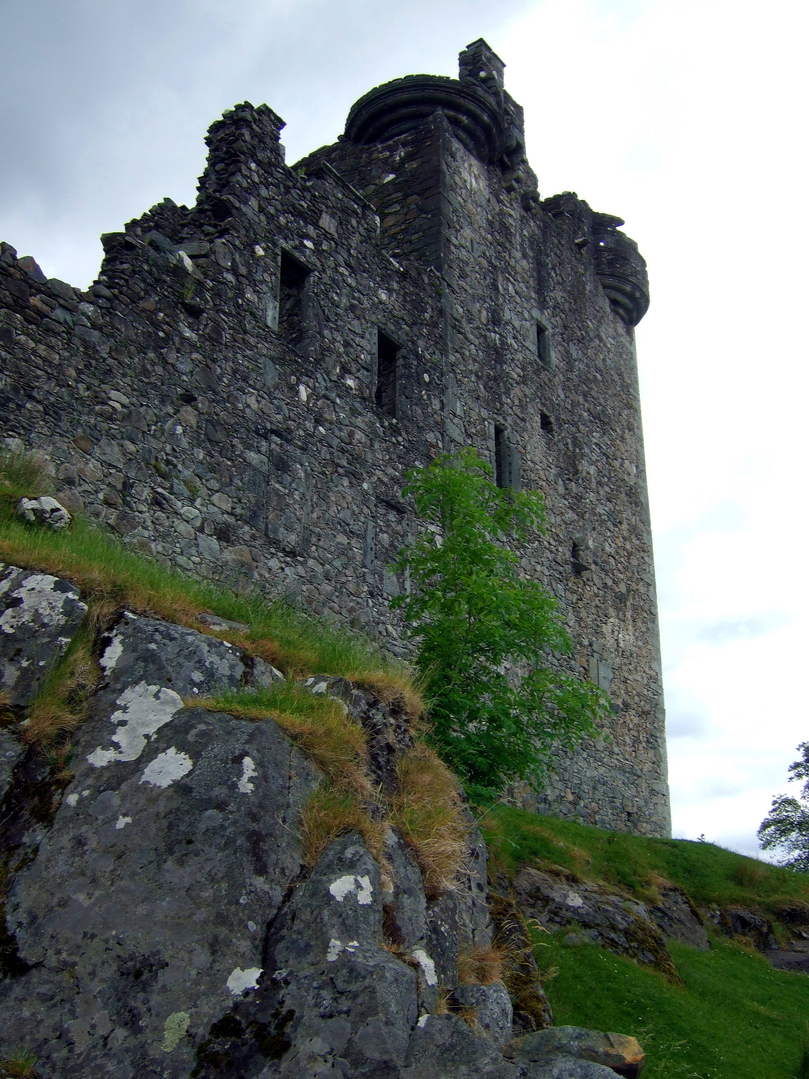 The castle was inhabited by the Campbells until the end of the 17th century or later, and by then their main stronghold was at Balloch, which is now called Taymouth. Kilchurn was converted into a barracks for 200 men and officers, and was garrisoned by Hanoverian troops in  1745. The building was unroofed by 1775. The castle was recently consolidated and repaired. 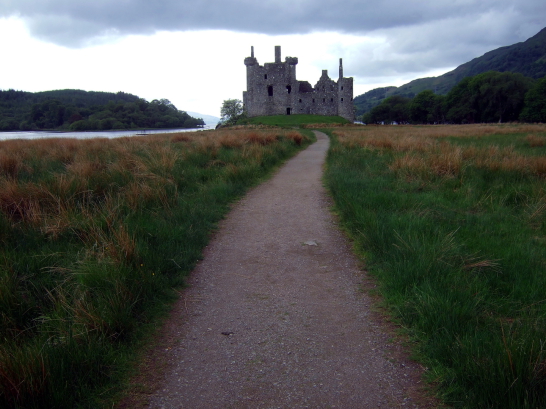 There is a story that the castle is haunted by a disembodied voice, and the story goes that a child was walled up in the upper part of the tower.
Could be the midgiest place in the world on a grey airless day in July.