Fife: About 2.5 miles north-east of Newburgh, on minor roads and foot north of the A913, near the south shore of the Firth of Tay, at Ballinbreich Castle. 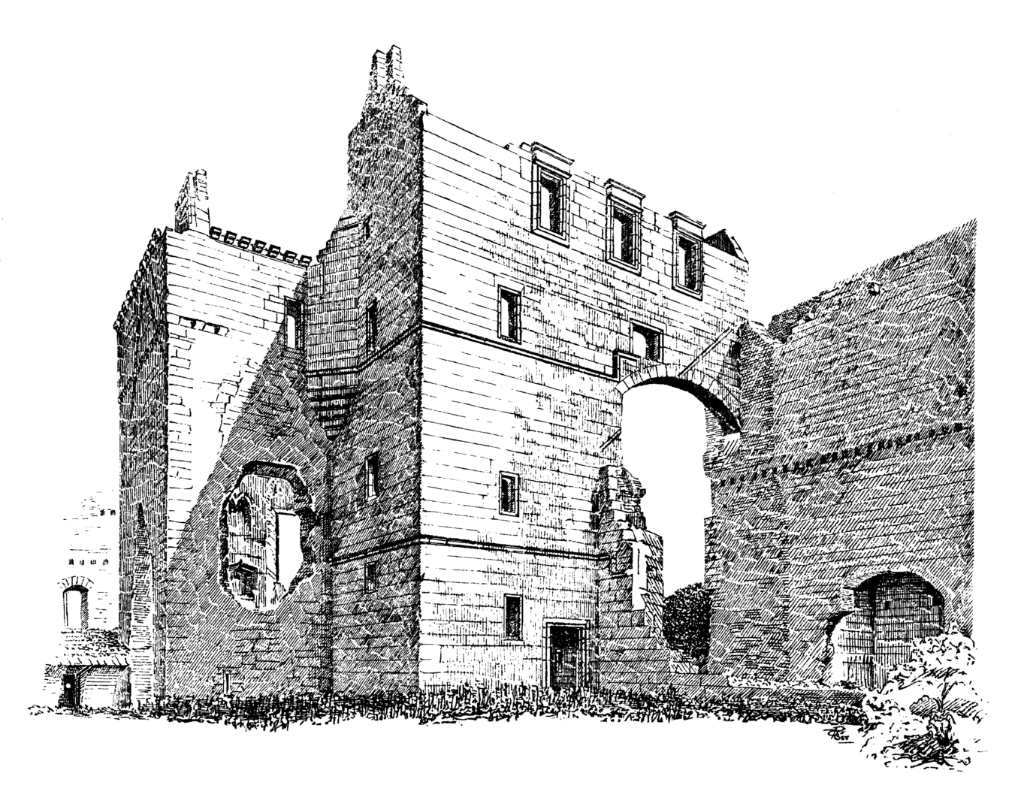 Still an impressive ruin, although overgrown and crumbling, Ballinbreich Castle (pronounced ‘Bambreich’) is a substantial 15th-century courtyard castle, which was altered and extended in the 16th century. It consists of an L-plan range of three storeys, with a stair-tower in the re-entrant angle. A curtain wall encloses a rectangular courtyard with further ranges of buildings and towers.
The original entrance has been engulfed by later work, and the new entrance is defended by a round tower with gunloops. The vaulted ground floor of the range contains the kitchen. A ruined chapel has a sedilia and piscina.
‘Bambreich’ is marked on Blaeu’s map of Fife.
The property was held by the Abernethys, but the Leslies acquired the property through marriage about 1312, and began to build the castle soon after, although it was rebuilt and extended in the 16th century. The family were made Earls of Rothes in 1457. William Leslie, 3rd Earl, was killed at the Battle of Flodden in 1513. George, 4th Earl, was one of the commissioners for the marriage of Mary to the Dauphin of France. He died in mysterious circumstances in 1558, along with the Earls of Cassillis and others, after becoming ill at Dieppe in France: it is thought that they were poisoned. Norman, his son and Master of Rothes, one of those responsible for the murder of Cardinal David Beaton in 1546, went on to fight in France and was killed after the Battle of Renti in 1554. The castle was visited by Mary, Queen of Scots, the following year. Andrew Leslie, 5th Earl of Rothes, fought for Mary Queen of Scots at Langside in 1568, and was buried at Flisk [NO 314225]. John, 7th Earl, was made Duke of Rothes in 1680, but the elevated title was extinct on his death, although the earldom continued through relations.
The property was sold to the Dundases of Kerse in the 19th century, who were made Earls of Zetland (Shetland) in 1838, then Marquises in 1873.