Inveraray Castle is a magnificent towered mansion with a splendid interior, long the seat of the influential Campbell Dukes of Argyl, located among colourful gardens and fine grounds in a beautiful spot by the sealoch Loch Fyne and near the attractive whitewashed village of Inveraray. 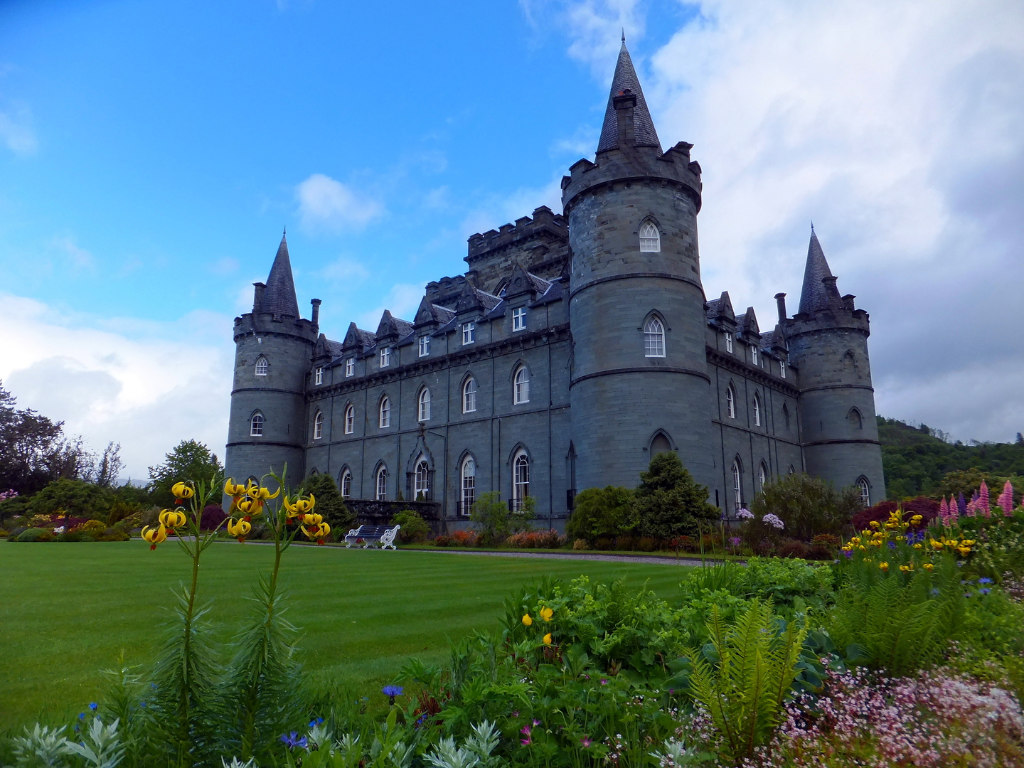 Argyll & Dunbartonshire: North of Inveraray, on minor roads west of A83, west of Loch Fyne near mouth of River Aray, at Inveraray Castle. 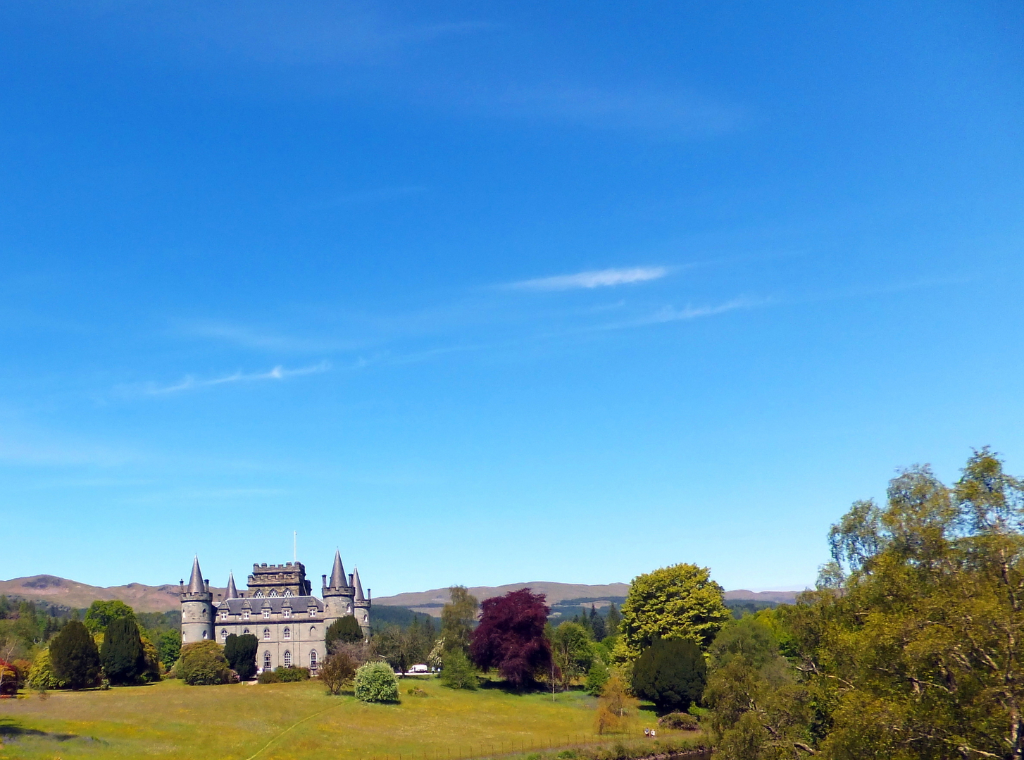 Set in colourful gardens and landscaped grounds by the banks of Loch Fyne, Inveraray Castle, a large, muscular and impressive edifice, was begun in 1746. The original building was a symmetrical classical mansion with towers and turrets, which was designed by Roger Morris and William Adam, then completed by Robert and John Adam. The castle suffered a fire in 1877, and was then restored with the addition of a third floor and the conical roofs on the corner towers. 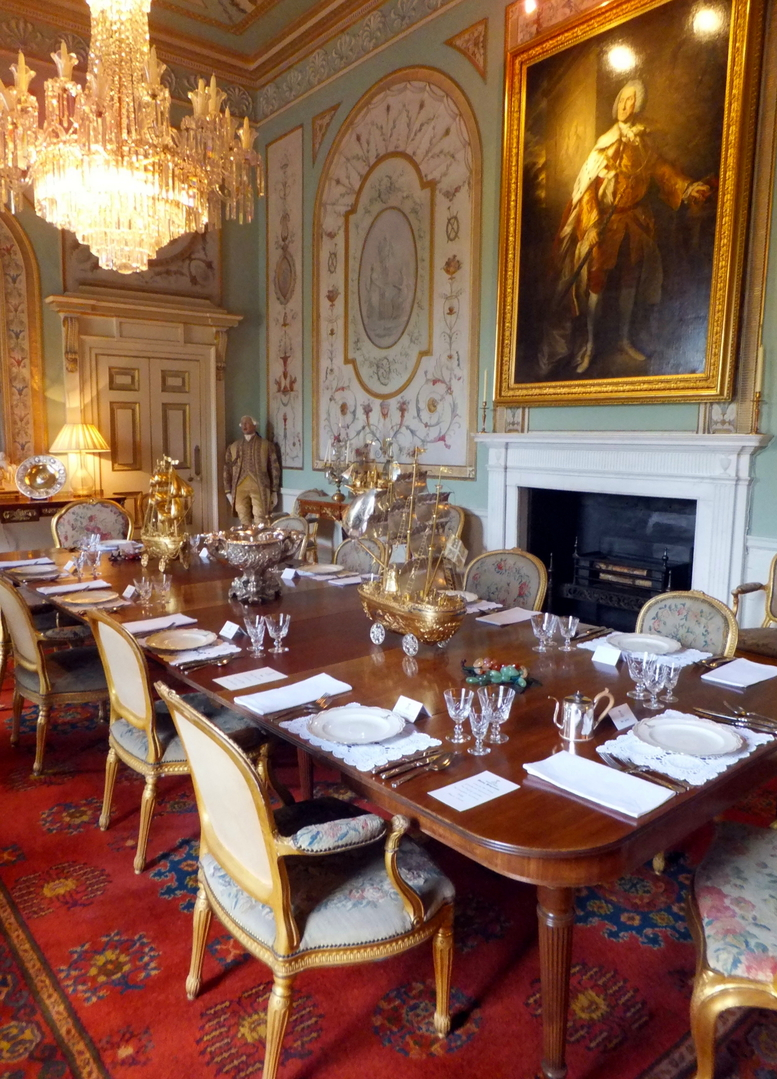 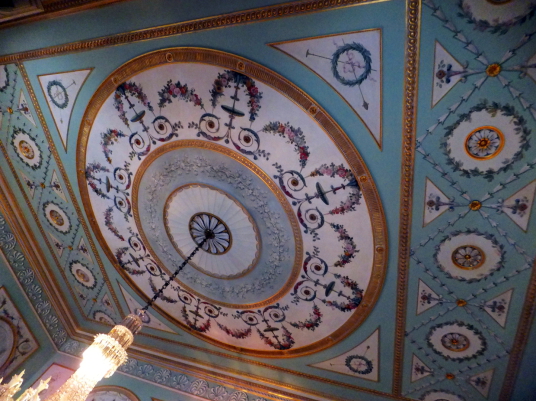 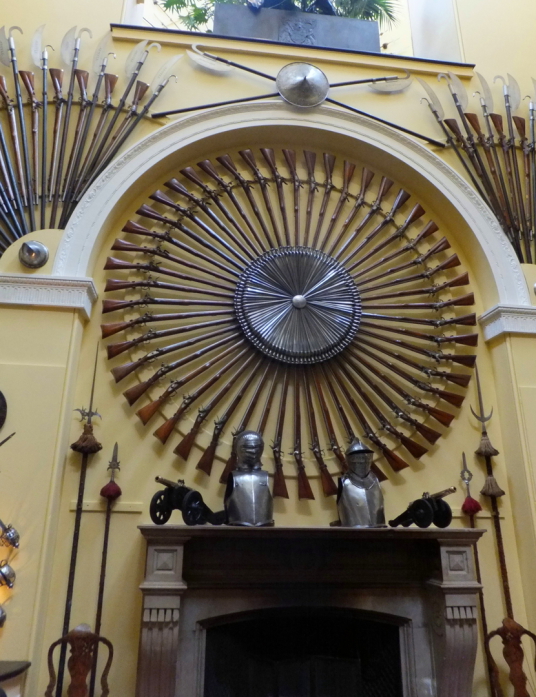 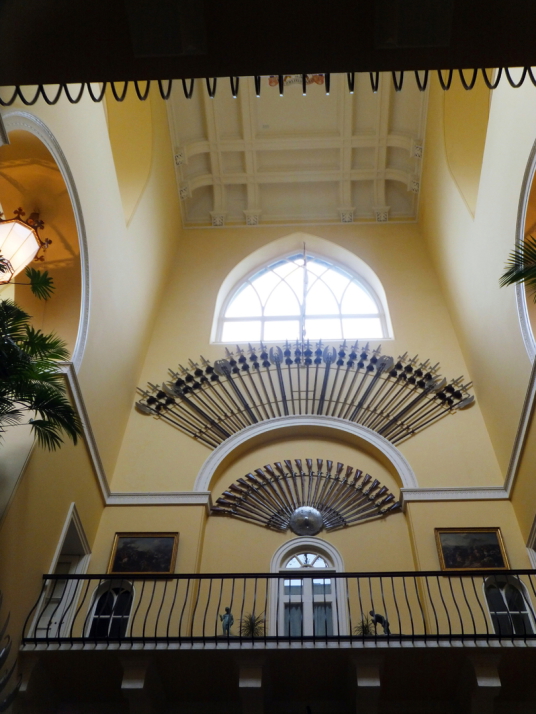 The castle houses many interesting and lavishly decorated rooms, with collections of tapestries and paintings, and superb displays of weapons. Rob Roy MacGregor’s sporran and dirk handle are on display. 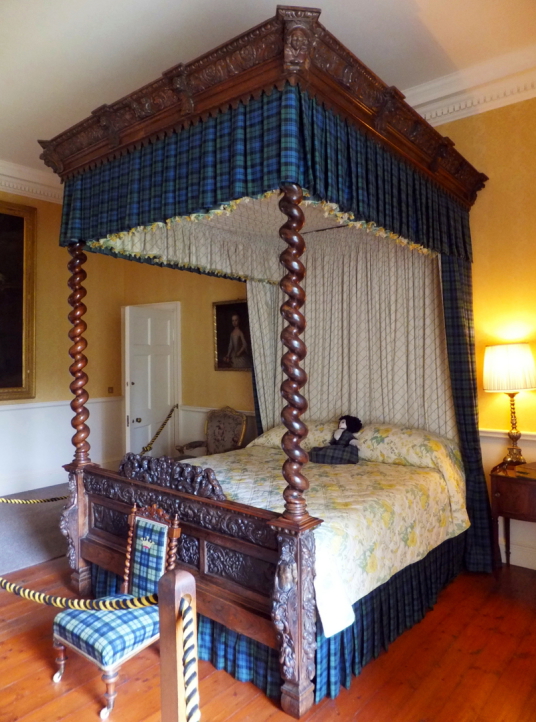 There was an old stronghold near the present castle, dating from the 15th century castle but nothing of which remains. It had a tower of four storeys and a garret, and bartizans with conical roofs. The castle is depicted on Pont’s map of Dunoon and Inveraray as ‘Inreyray’, and is shown as a large building with two tall towers in a courtyard. The old castle was demolished as part of Archibald, 3rd Duke of Argyll's, rebuilding of the new castle and moving of the old village to its present site. 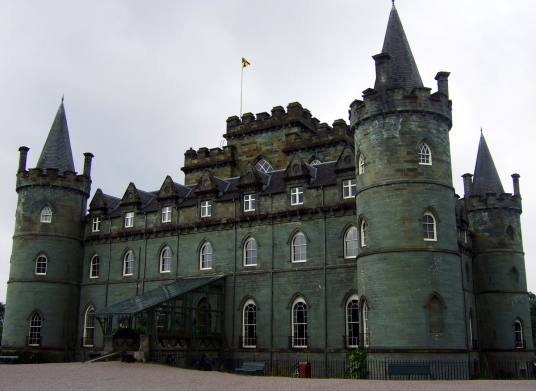 This was a property of the Campbell Earls of Argyll, and Colin Campbell, 1st Earl, was Lord High Chancellor of Scotland in 1483. Archibald, 2nd Earl, was slain at the Battle of Flodden in 1513, and the 4th Earl, another Archibald, was at the forefront of the Reformation. James V visited in 1533, as did Mary, Queen of Scots, in 1563. Archibald, 5th Earl, led Mary’s forces to defeat at the Battle of Langside in 1568, and was later Lord High Chancellor of Scotland. 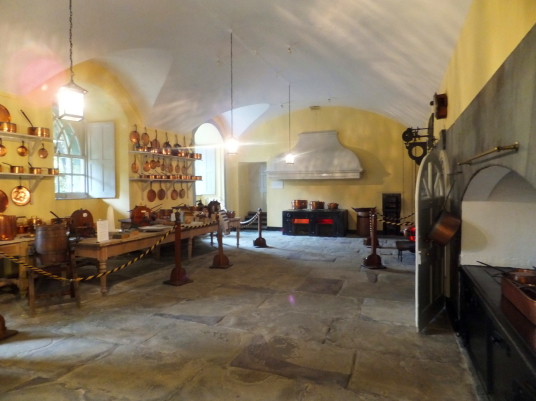 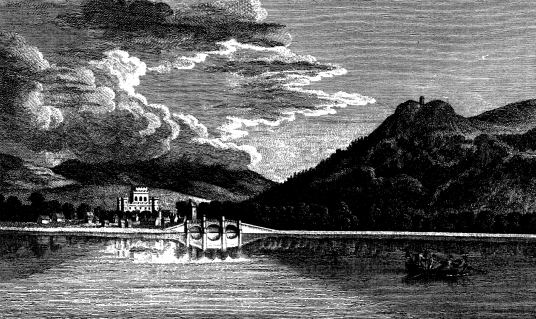 Archibald, 8th Earl, was made Marquis of Argyll in 1641. He led the forces that were defeated by the Marquis of Montrose at Inverlochy and Kilsyth in 1645, and the castle had been pillaged and burnt the previous year by Montrose. Montrose was defeated that year, but the Earl cooperated with the Cromwellian administration and was himself executed by beheading using the Maiden in 1661 after the Restoration of Charles II. The Campbells of Argyll also held the beautiful Castle Campbell near Dollar in Clackmannanshire and Argyll's Lodging, a magnificent furnished townhouse in the historic burgh of Stirling, as well as acquiring Cawdor Castle in the Highlands. 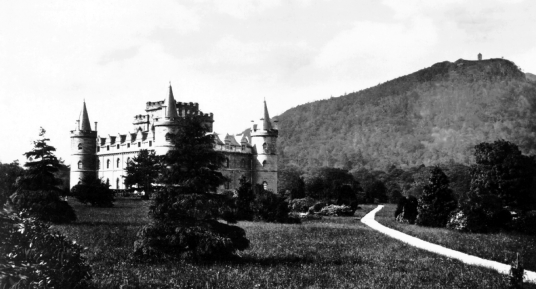 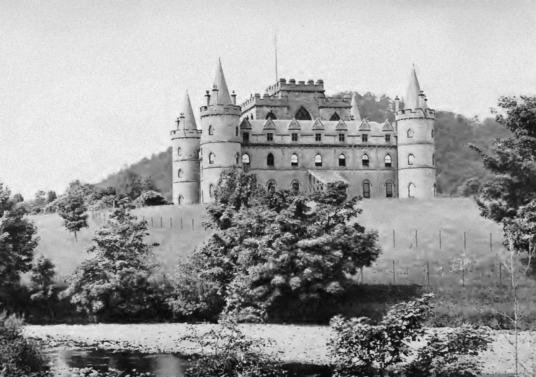 Archibald, 9th Earl, was found guilty of treason and then later led an invasion of Scotland in 1685 in support of the Duke of Monmouth, but this failed and Campbell was also beheaded. Archibald, 10th Earl, was made Duke of Argyll in 1701. John, 2nd Duke, led the Hanoverian forces at the Battle of Sheriffmuir in 1715, and the Campbells of Argyll continued to support the Hanoverian side. Dr Johnson and Boswell visited in 1773. 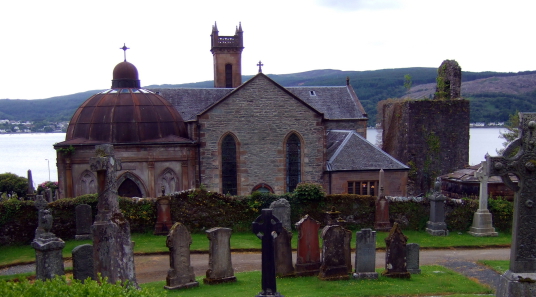 The Campbells of Argyll were buried from the 15th century until 1949 at Kilmun, where there is a metal domed mausoleum. 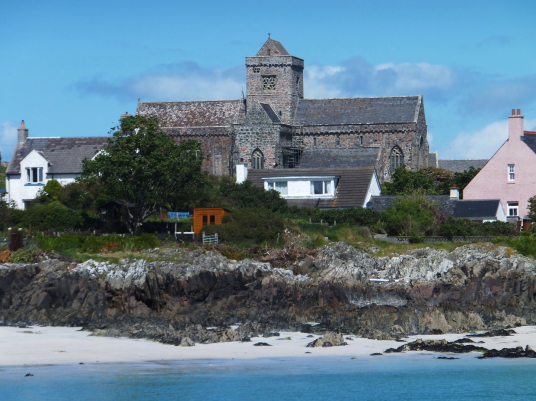 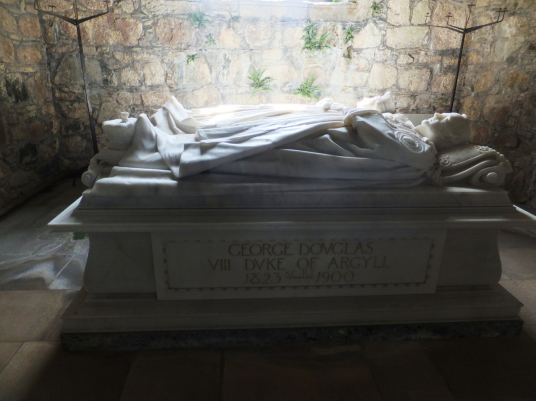 George, 8th Duke of Argyll, married Princess Louisa, daughter of Queen Victoria, helped repair Iona Abbey, and died in 1900. He and his wife were buried in the abbey church and have splendid marble effigies. 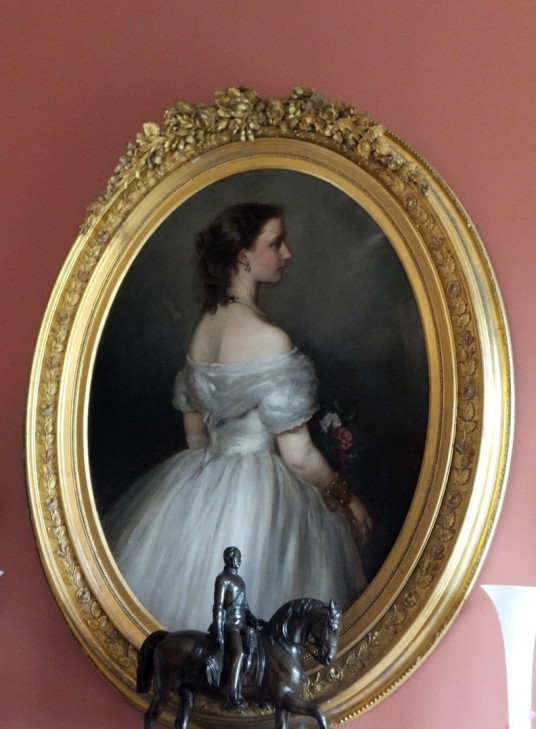 The present Duke is Torquhil Campbell, 13th Duke of Argyll, who is married to Eleanor Cadbury, from the former chocolate-making family. They have three children and the Duke was captain of Scotland's elephant polo team that the won the World Elephant Polo Championships in 2005. Not sure how many Scottish elephants there are… 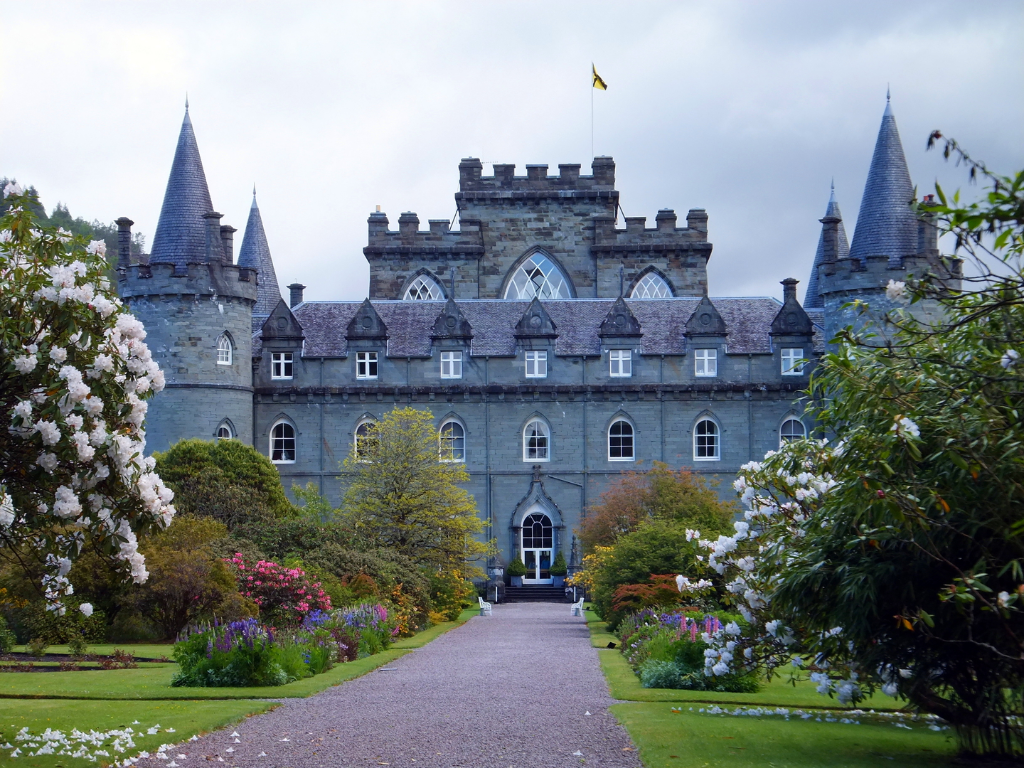 The castle is in a pretty spot near the mouth of the River Aray where it joins Loch Fyne, and there are 2 acres of formal gardens as well as wider policies including landscaped parkland.

The castle featured in the 2012 Christmas special for the ITV series Downton Abbey. 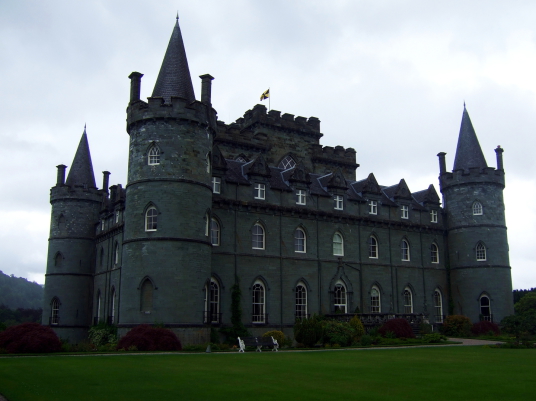 Several ghost stories are recorded in various places about Inveraray, although these are refuted. The old castle was said to be haunted by a ghostly harper, one of Montrose’s victims from the attack in 1644. Another manifestation is said to be a spectral birlinn, which is reputedly seen when one of the Campbell family is near death, seen in 1913 on the death of Archibald Campbell, as well as gatherings of ravens. 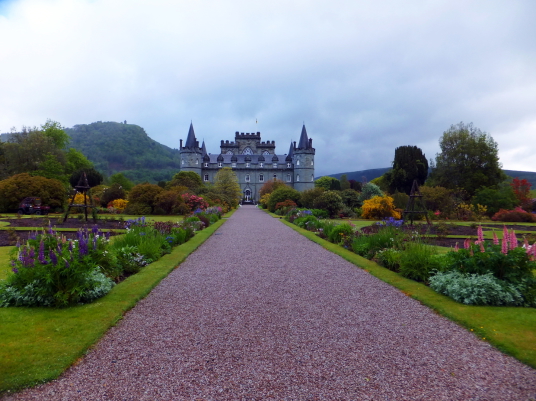 The apparitions of Redcoats, some of Cumberland’s men, are said to have been seen marching on the road through Glen Aray, not far from the castle. 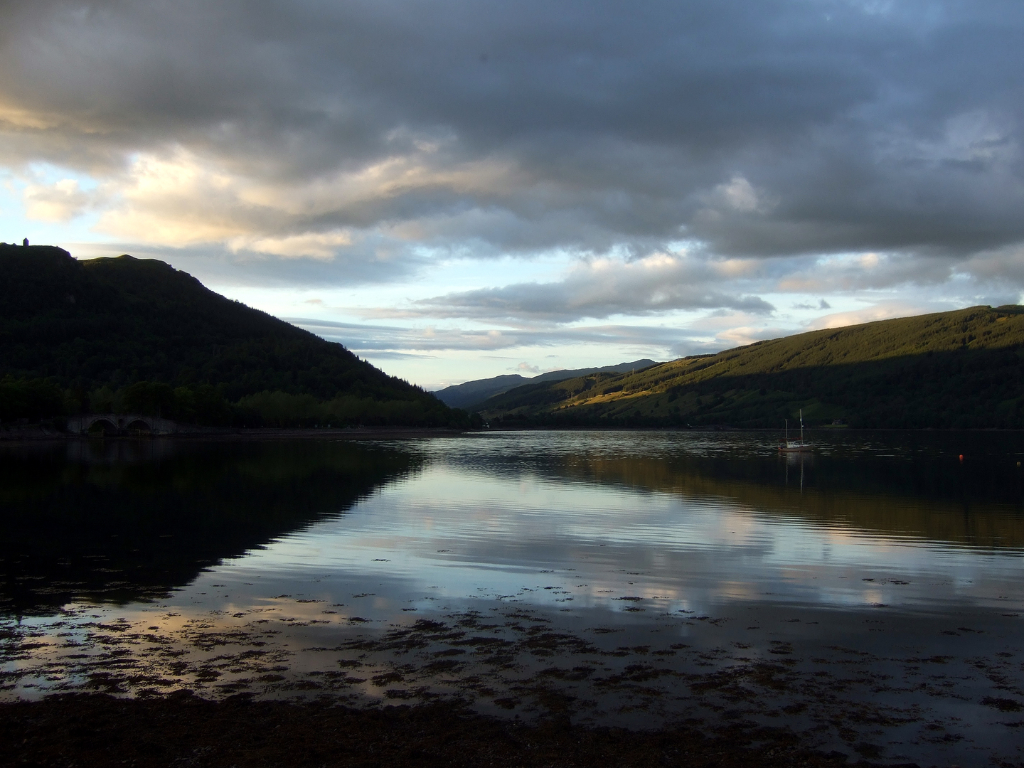 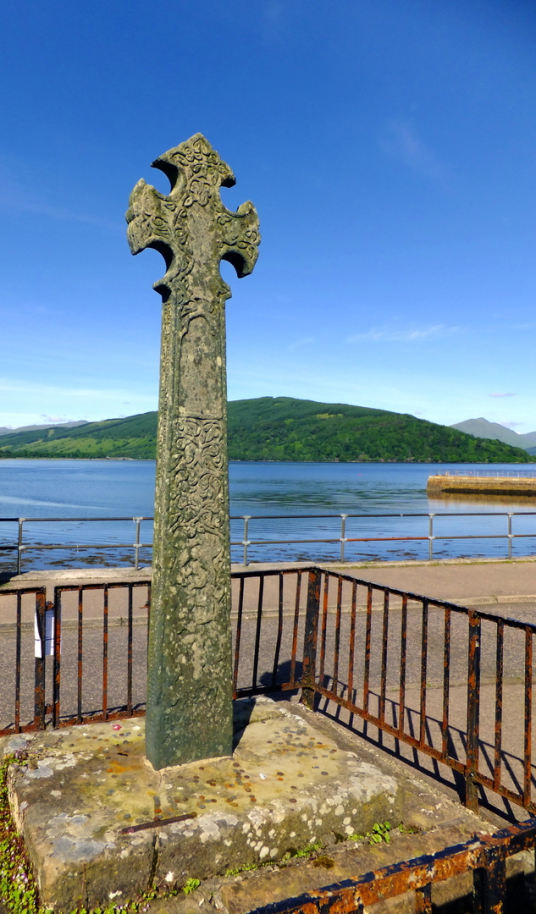 The burgh of Inveraray, with its white-washed buildings on the banks of Loch Fyne, dates from the 18th century, and was moved here from near the castle. The village has many attractions, including the old mercat cross [NN 097086], which dates from the 15th century and Inveraray Jail, an 18th-century courtroom and prison and now a fascinating tourist attraction (www.inverarayjail.co.uk). There is also the bell tower, shops, the George Hotel (www.thegeorgehotel.co.uk) in 18th-century buildings, and other places to stay at and to shop and  to eat.