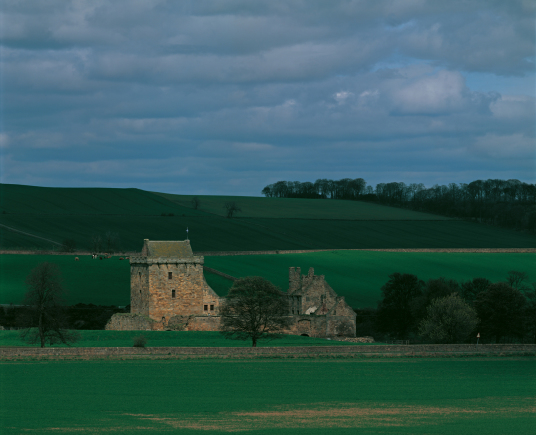 Balgonie Castle (Many thanks and © Tom Wolf www.tom-wolf.com)

Fife: About 3 miles east of Glenrothes, on minor road south of A911 from Milton of Balgonie, on the south bank of the River Leven. 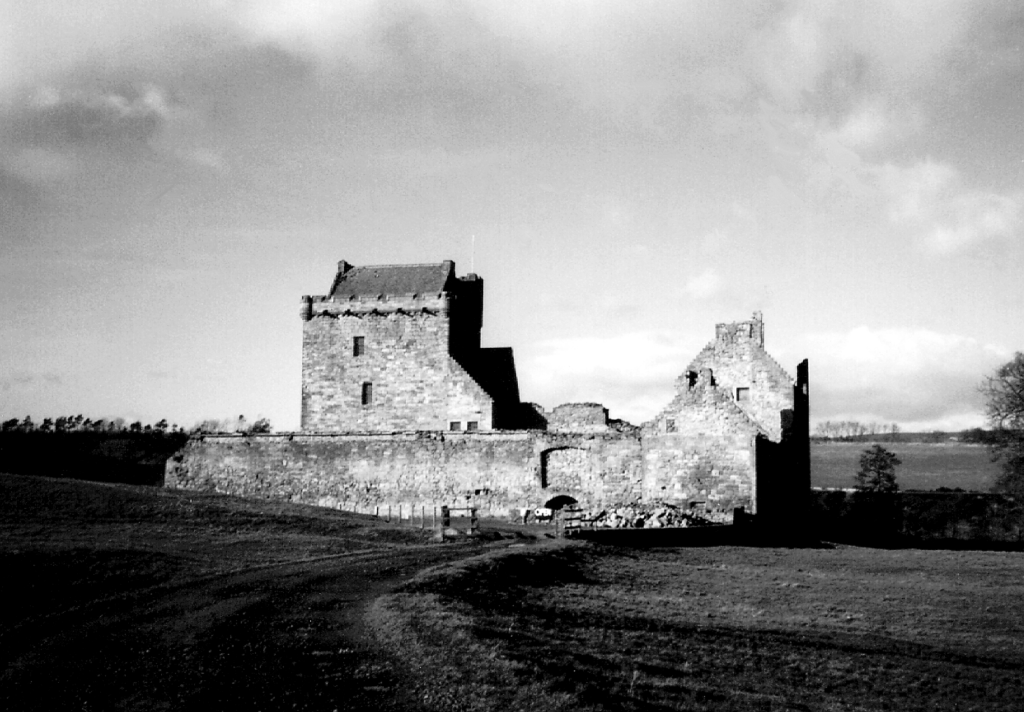 Balgonie Castle is a fine 13th- or 14th-century tower of five storeys and a garret within a crenellated parapet. The tower stands in a courtyard, which encloses ranges of buildings, some of them ruined, dating from the 14th to 18th centuries.
One range, mostly from 1496, incorporates a 14th-century tower and chapel. This block contains a hall, and was originally only connected to the keep by a bridge. A joining block, with a scale and platt stair, was added in 1666. 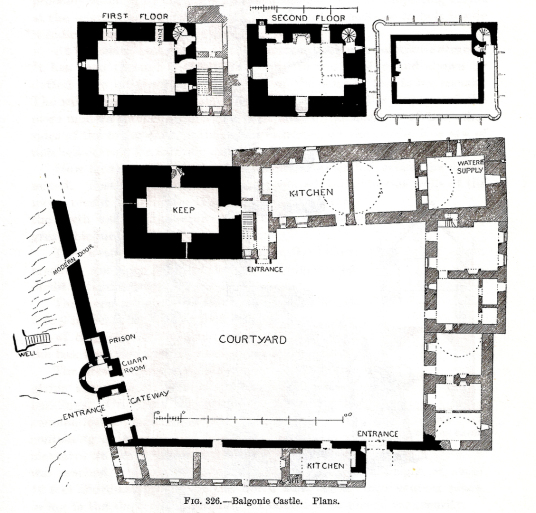 Another 15th- or 16th-century range was remodelled between 1635 and 1641, and again in 1702. The gatehouse, mostly from the 15th century, has two guardrooms and a prison with a privy.
The basement and first floor of the main tower are both vaulted, and originally had separate entrances. A turnpike stair climbs from the first floor to the parapets.
‘Balgowny’ is marked on Blaeu’s map of Fife, then ‘Balgonie’ on Adair”s map of the east part of Fife. 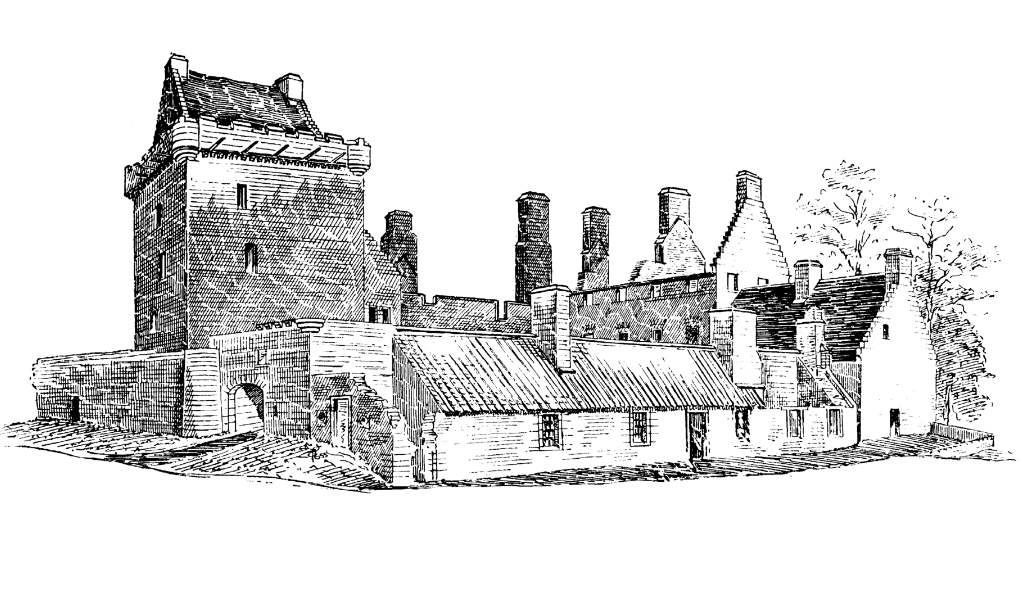 The castle was built by the Sibbalds, who held the property from before 1246, but passed by marriage to Sir Robert Lundie, later Lord High Treasurer, who extended the castle about 1496. James IV visited the castle in 1496, as did Mary, Queen of Scots, in 1565. It was sold in 1635 to Alexander Leslie, who fought for Gustavus Adolphus of Sweden during the 30 Years War and was made a Field Marshall. Leslie was captured at Alyth in Angus after the Battle of Dunbar in 1650, while on the losing side against Cromwell, and was imprisoned in the Tower of London, only the intervention of the Queen of Sweden saving his life. He died at Balgonie in 1661. Balgonie was captured and plundered by Rob Roy MacGregor and 200 clansmen in 1716. It was sold in 1824 to the Balfours of Whittinghame. The castle has undergone a long-running programme of restoration and is occupied. 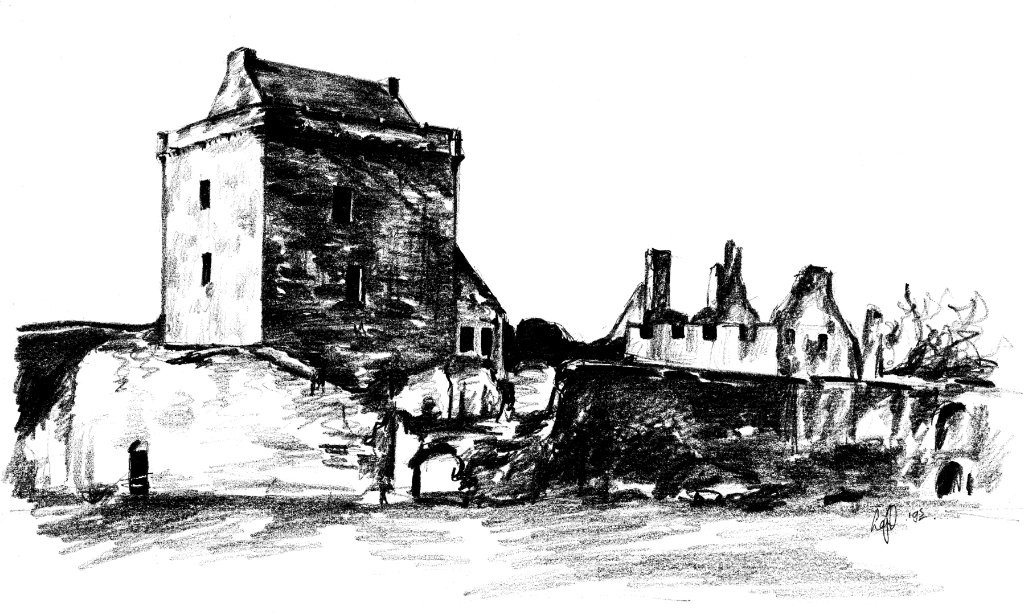 The castle was used as a location for the TV series Outlander, and the movie Fairy Flag.
Balgonie is believed to be haunted, and ghostly voices and apparitions have been witnessed in the Great Hall. A skeleton was found buried under the floor in 1912.
A ‘Green Lady’, Green Jeanie, thought to be the spirit of one of the Lundies, has been seen in recent times, and was recorded in 1842 as being a ‘well-known ghost’. Other ghosts include a 17th-century soldier, the sounds of a spectral dog, a hooded figure and a medieval apparition.