Ayrshire: About 5 miles north-west of Maybole, on minor roads west of A719, on shore of Firth of Clyde at village of Dunure, south of harbour, at Dunure Castle. 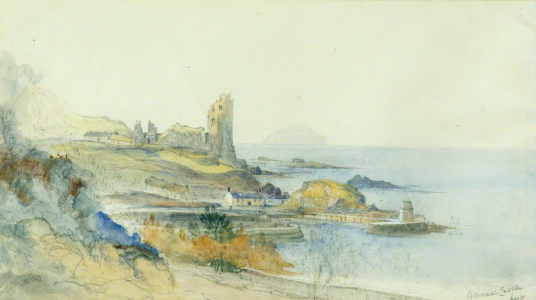 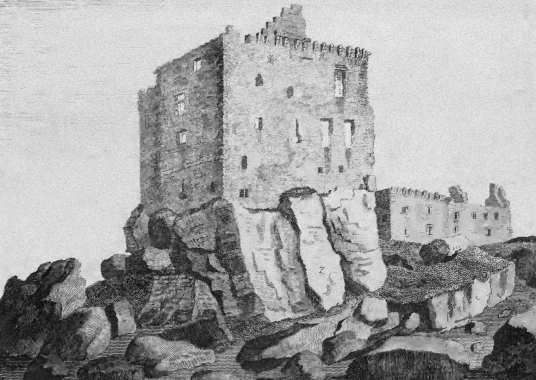 Once a strong fortress on the summit of a rocky promontory, Dunure Castle consists of a ruined 13th-century tower, which was later altered and extended, surrounded by a curtain wall. There is also a 15th-century block, at lower level, containing kitchens, a hall and private chambers. There is a well-preserved beehive doocot, dating from the 16th or 17th century. 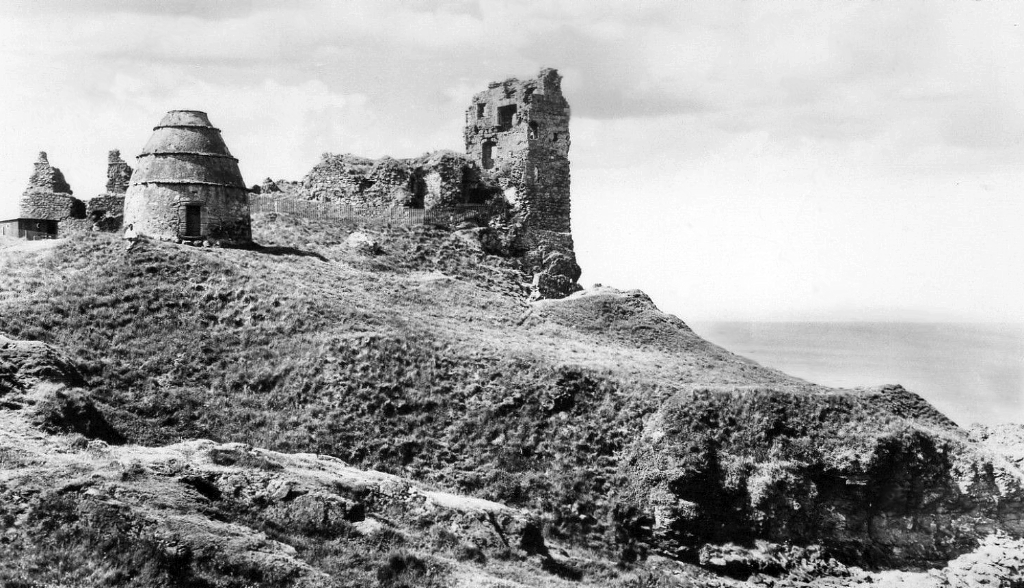 ‘Dun-ure Cast.’ is prominently marked on Blaeu’s map of Carrick, depicted as a tower and courtyard in a large enclosed and wooded park. 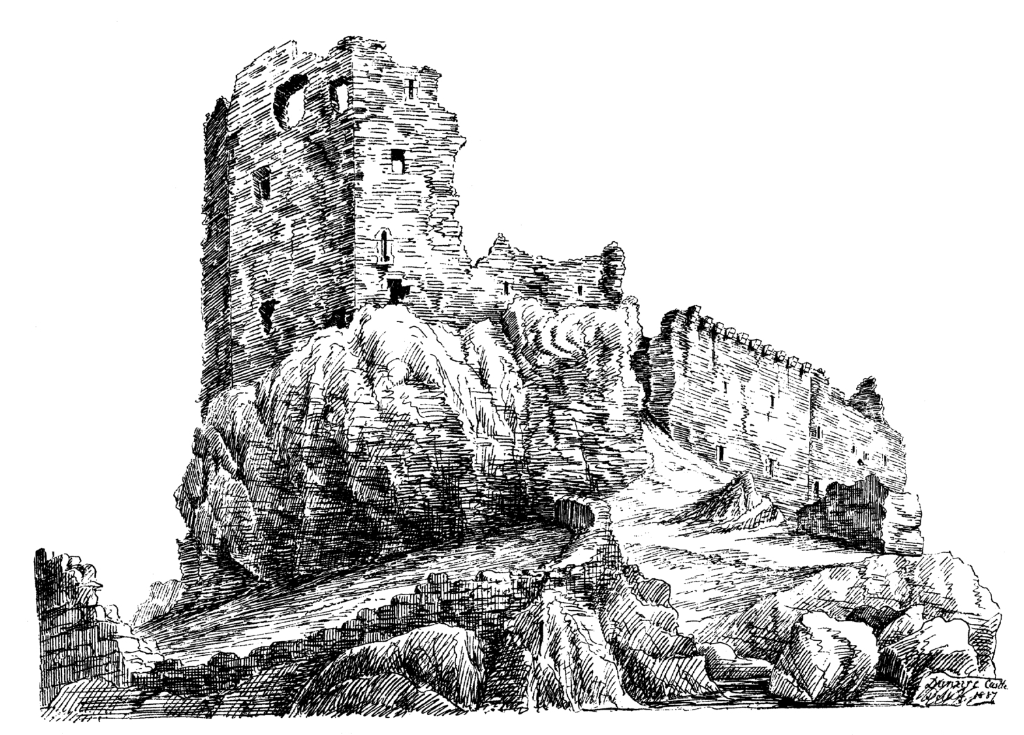 Dunure was a property of the Kennedys of Dunure, later Earls of Cassillis, from the 14th century. One of the family, James Kennedy, married Mary, daughter of Robert III, and another James was Bishop of St Andrews and founded St Salvator’s College. 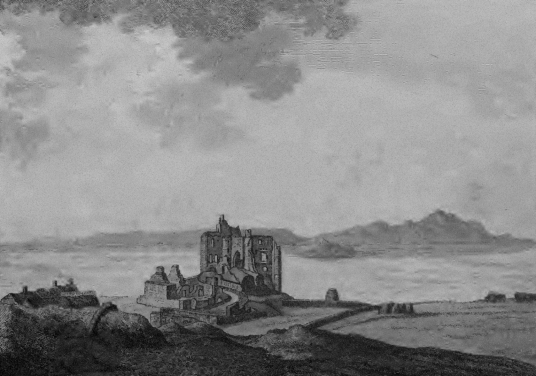 In 1570 Allan Stewart, commendator of Crossraguel Abbey, was roasted in sop here by Gilbert Kennedy, Earl of Cassillis, until he signed away the lands of the abbey (presumably because down the centuries the Kennedys had donated much land to the abbey). Thomas Kennedy of Bargany, an enemy of Cassillis and perhaps hoping the acquire the lands himself and hearing of the treatment of Stewart, stormed the castle and rescued the Commendator, apparently doing some damage to the buildings. Cassillis was instructed to pay Stewart a pension, although he kept the lands, and the events led to a feud with the Kennedys of Bargany, and then the Muirs of Auchendrane. 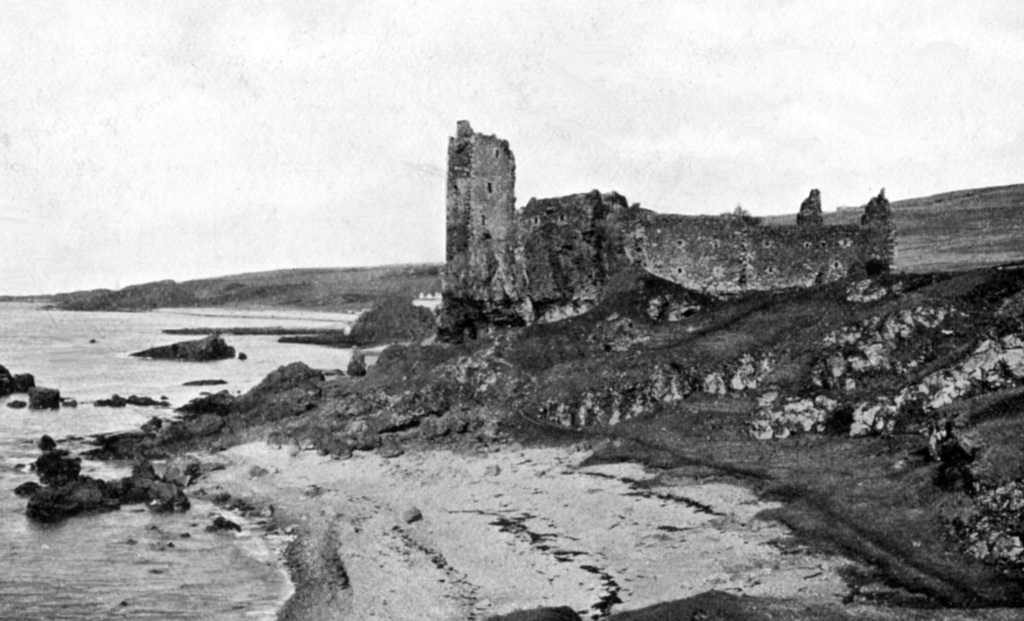 Dunure may have been torched and blown up sometime around the middle of the 17th century. By 1696 the castle was abandoned and ruined, and it appears to have been systematically dismantled.
The castle was recently excavated and consolidated.
Ghostly cries have reputedly been heard emanating from the chamber in which Stewart was roasted.