Perthshire: About 3 miles south and west of Crieff, 2 miles north-west of Muthill, on minor road west of A822, in Drummond Park, at Drummond Castle. 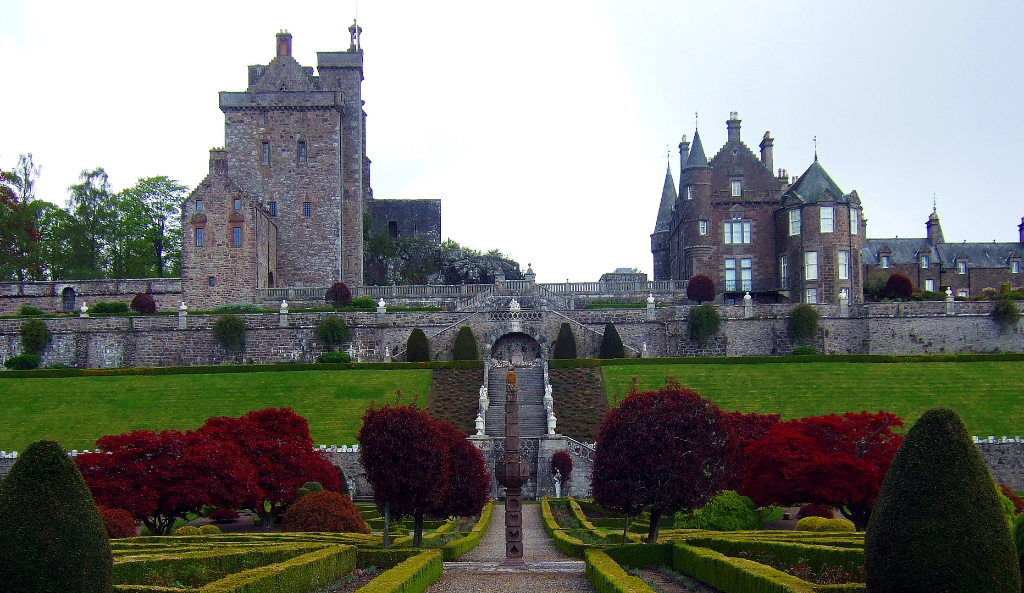 Built on a rocky outcrop, Drummond Castle consists of a 15th-century tower of five storeys and a garret. To this has been added a lower 17th-century extension, and a late 18th-century mansion, which was remodelled from the buildings near the tower. The old tower has a corbelled-out parapet, with open rounds, and a square stair-tower projects from one side. 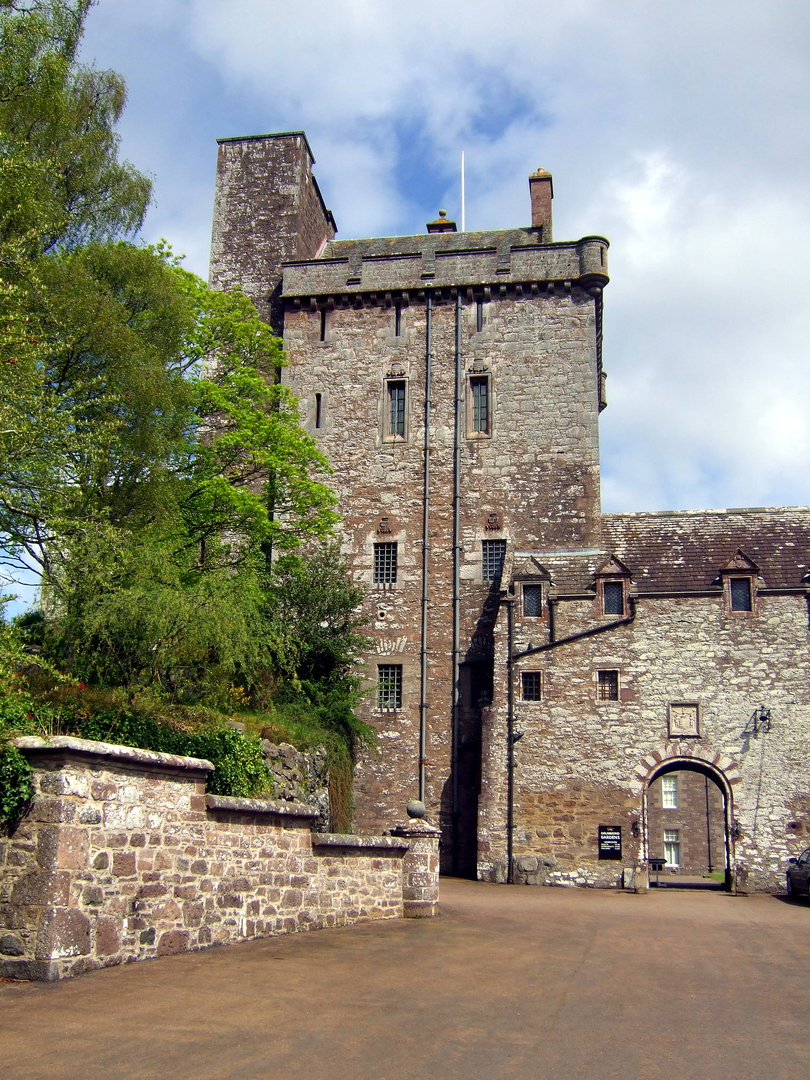 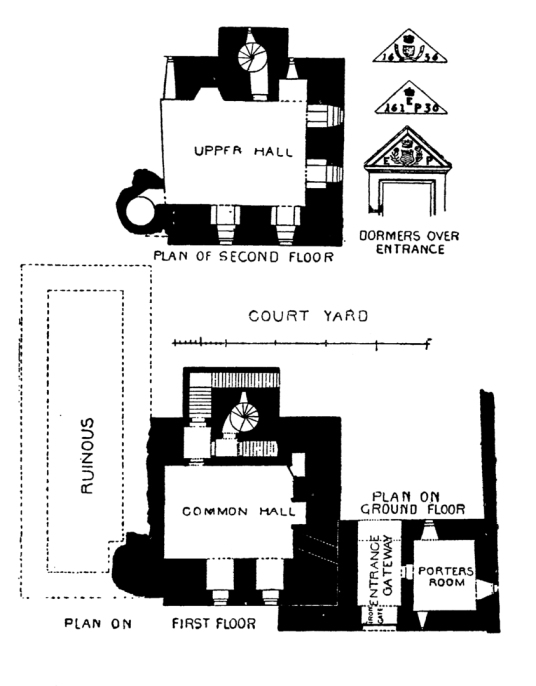 The entrance, at first floor level, is reached from the courtyard by an external stone stair. A lesser hall occupied the first floor, and the vaulted basement is reached by a narrow stair in the thickness of the wall. A turnpike stair, in the tower projecting from the keep, leads up to the main hall. The upper floors have been remodelled.
The extension comprises a rectangular gatehouse range of three storeys, through which a vaulted pend, with massive iron gates, enters the courtyard. Another range of buildings was demolished to foundations. 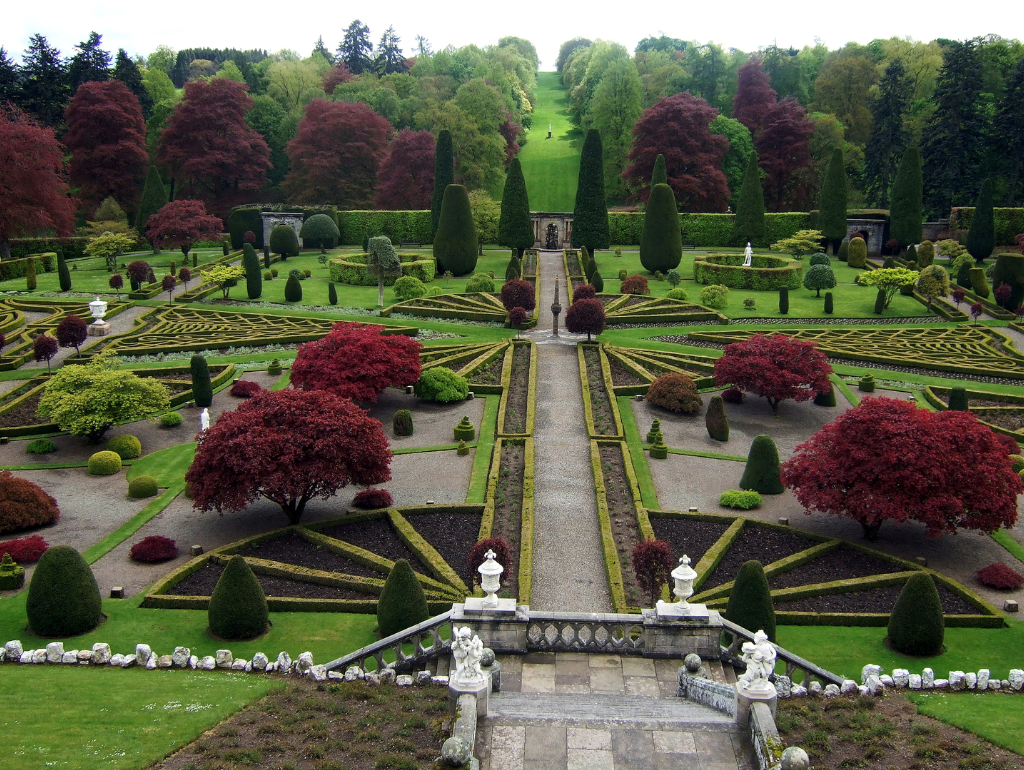 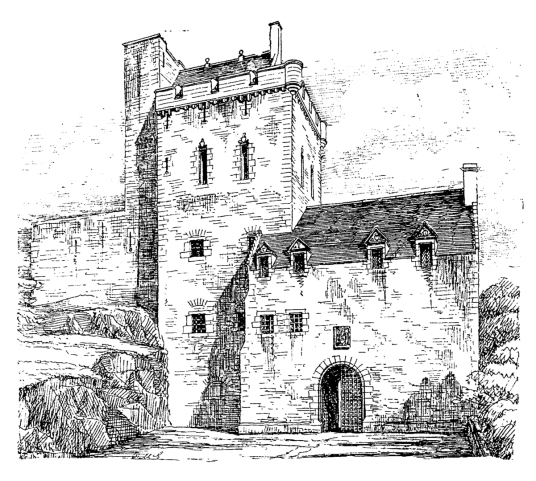 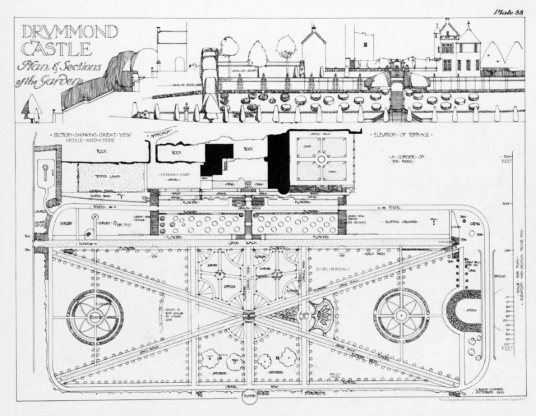 The magnificent gardens are laid out in the form of a Renaissance garden of the 17th century with parterres, formal terraces, statues, urns and fountains. The gardens were abandoned after the Jacobite Risings, but were restored early in the 19th century and then again in the 20th century.
‘Drummond Castle’ is marked on Pont’s map of South Strathearn, and is depicted as a large tower of five or more storeys with a lower wing. 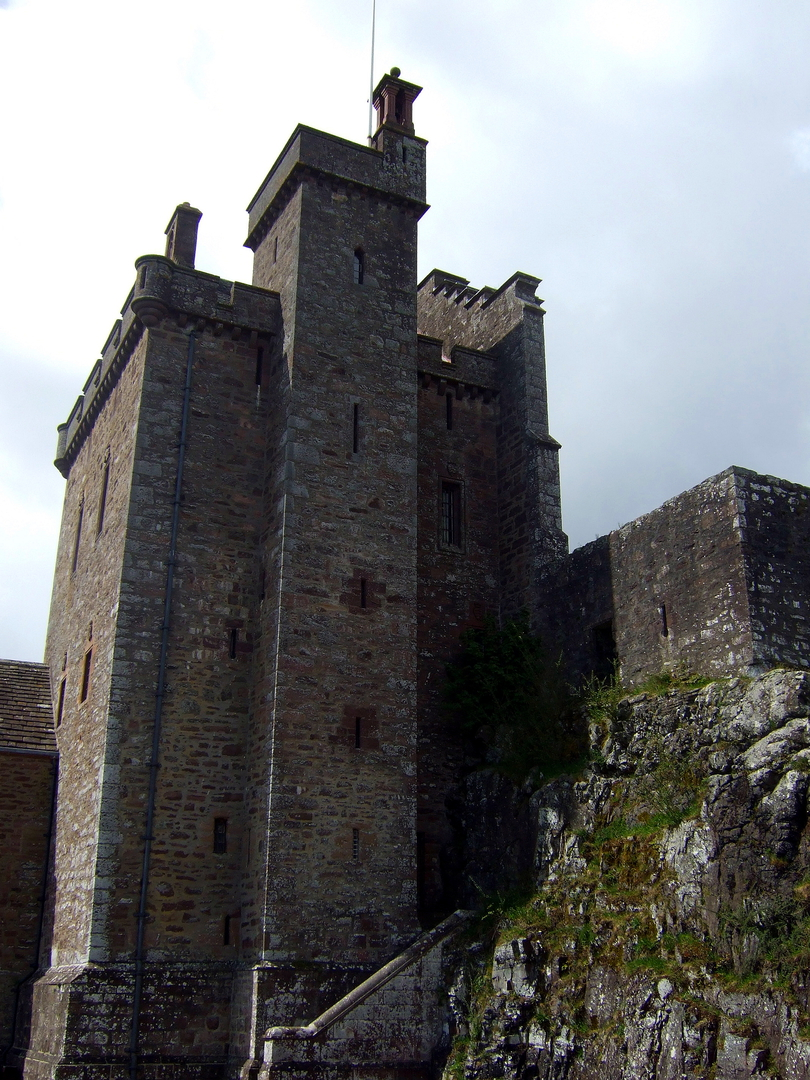 Sir Malcolm Drummond distinguished himself at the Battle of Bannockburn in 1314, and was given the lands here, originally known as Concraig – although the existing castle was not begun until the 15th century by John, 1st Lord Drummond. In 1490 William Drummond, second son of Lord Drummond, was executed after he torched Monzievaird Church [NN 850234], killing more than 150 Murrays, including women and children. 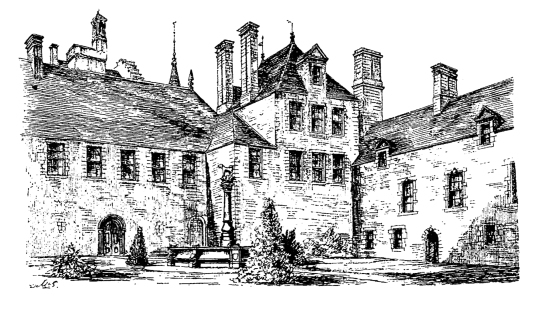 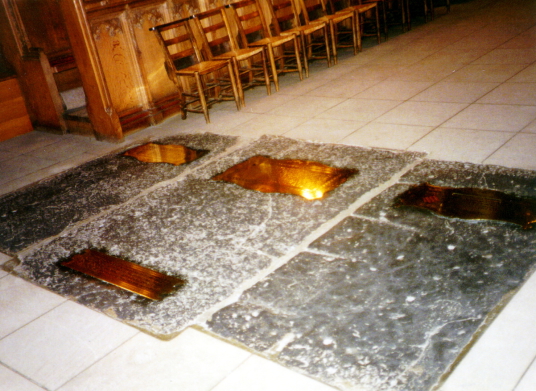 Margaret Drummond, daughter of the builder, was a lover of James IV,  and they had a daughter, also called Margaret. The story goes that the couple were secretly married, but some of the nobles, however, wanted James to marry Margaret Tudor, sister of Henry VIII, and form an alliance with England. To this end, and to ‘free’ James, Margaret, and two of her sisters Eupheme and Sibilya, were murdered at Drummond Castle in 1501 with poisoned sugared fruit, and are buried side by side in Dunblane Cathedral [NN 782014], where there is a memorial to them in the floor of the church. Doubt has been cast on the story, suggesting that this was just a case of simple food poisoning, but it actually sounds quite plausible.

Their daughter Margaret was given support by the king, and went on to marry into the Gordons of Huntly, and she and her husband were granted lands in 1510. Their son was George Gordon, 4th Earl of Huntly. 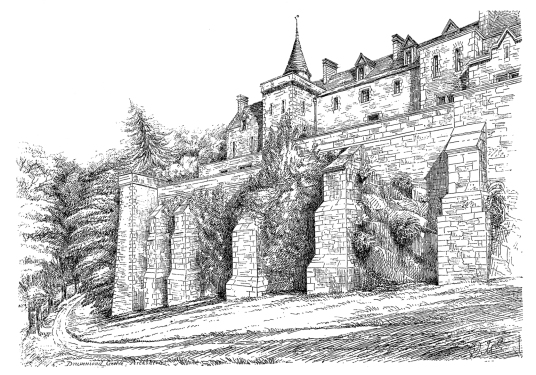 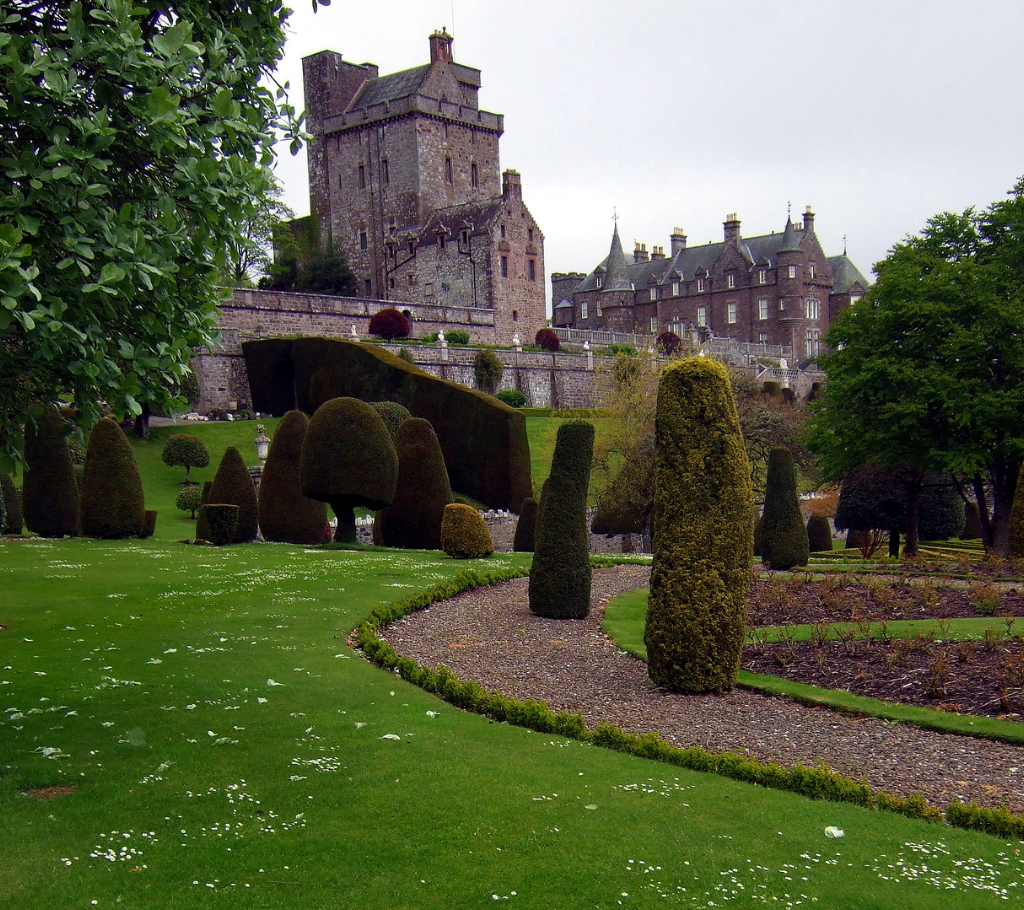 Mary, Queen of Scots, visited Drummond in 1566-7 with Bothwell. James Drummond, 4th Lord Drummond, was made Earl of Perth in 1605. The castle was badly damaged by Cromwell in the 1650s, then restored, to be slighted after having been occupied by Hanoverian troops during the Jacobite Rising of 1715. 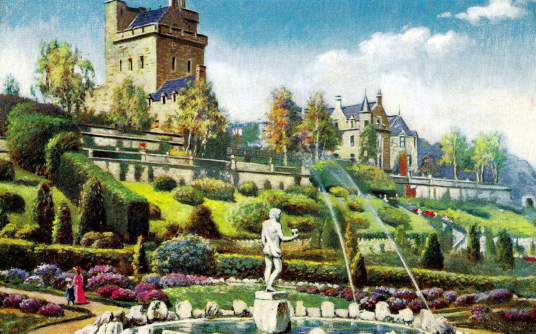 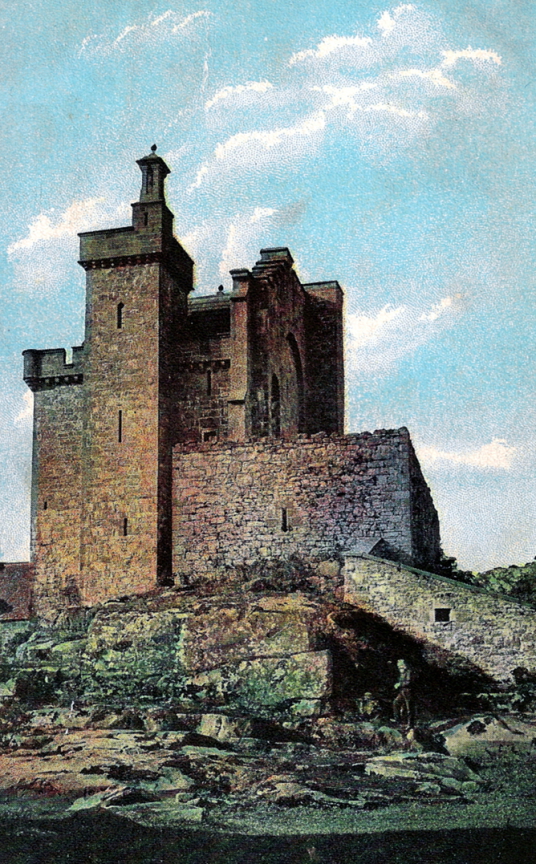 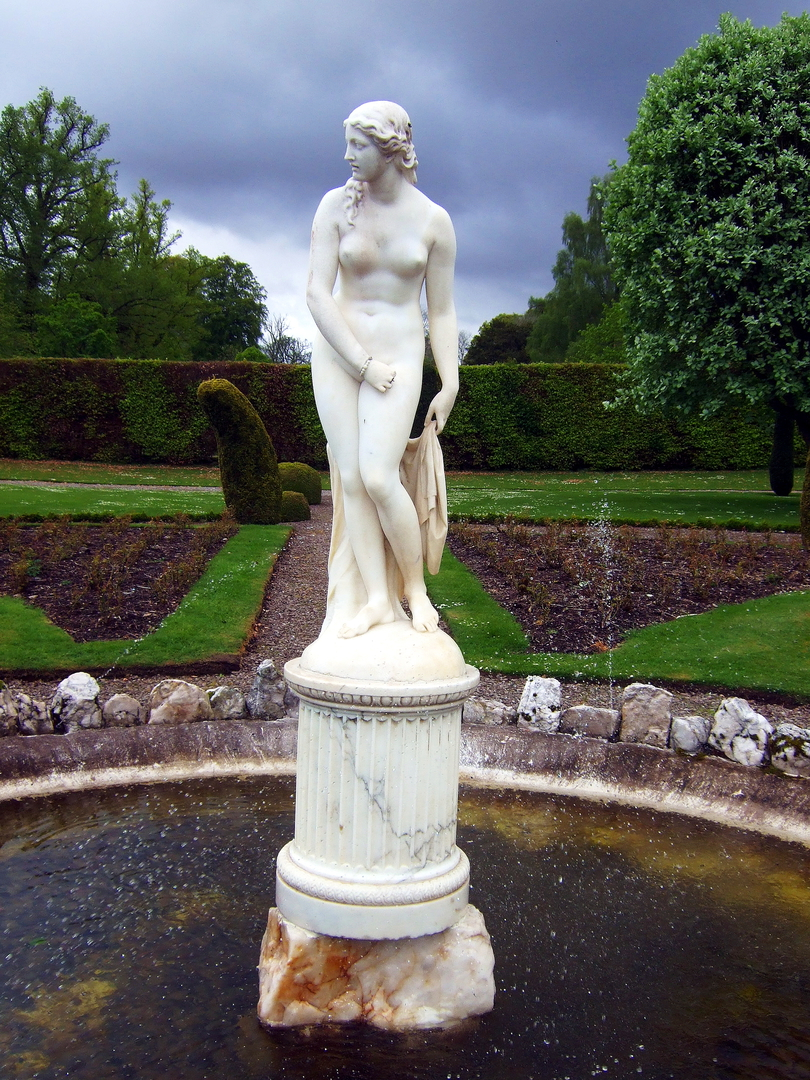 The castle passed by marriage to the Barons Willoughby de Eresby, created Earls of Ancaster in 1892 (the family name is Heathcote-Drummond-Willoughby). The castle was restored in 1822, when a turreted extension was added to the mansion, and Queen Victoria and Prince Albert visited in 1842. The castle and garden featured in the 1995 film of Rob Roy with Liam Neeson, and the gardens were used as the gardens of the Palace of Versailles in the second series of the TV show Outlander.