The ruinous but still magnificent courtyard palace of the monarchs of Scotland, set in a pretty spot on the banks of Linlithgow Loch in the historic burgh, and the birthplace of James V and Mary Queen of Scots. 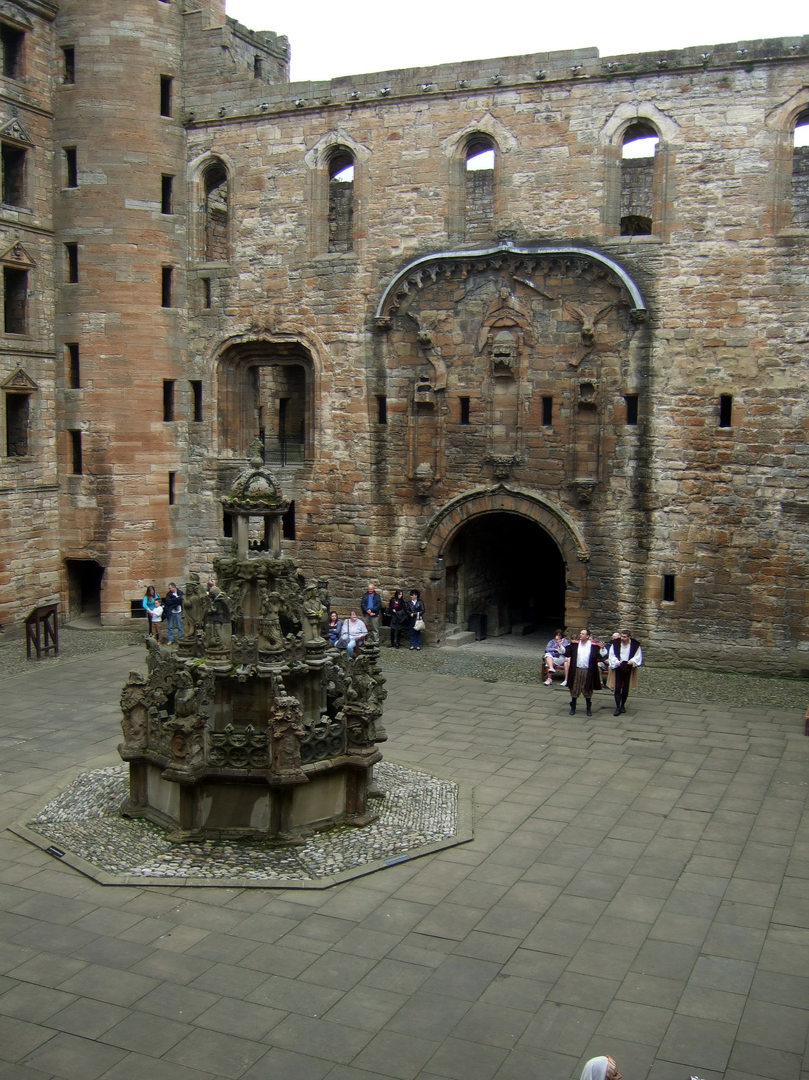 Lothians: In Linlithgow, on minor road north of A803, on the south shore of Linlithgow Loch, at Linlithgow Palace. 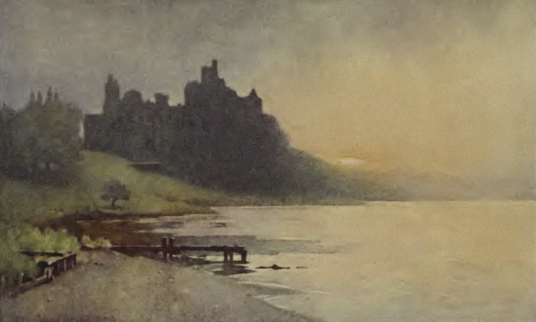 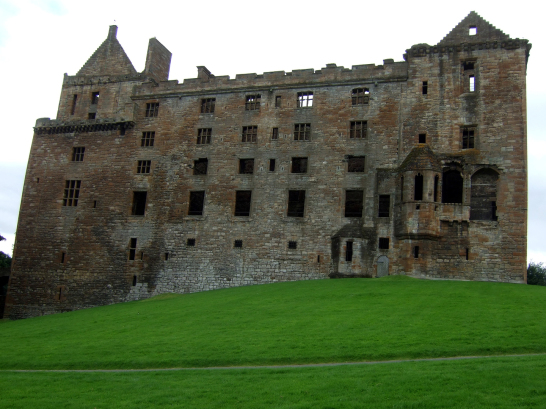 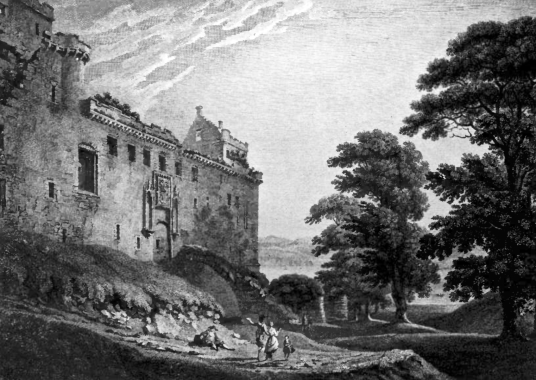 Once a splendid palace and still a spectacular ruin in a picturesque spot by the loch, Linlithgow Palace consists of ranges of buildings set around a rectangular courtyard, and may include 12th-century work. Stair-towers, within the courtyard, lead to all floors and to the battlements, which run all round. The hall has been a magnificent chamber with an unusual tripartite fireplace, as has been the chapel, and there are many other rooms in this stately building. 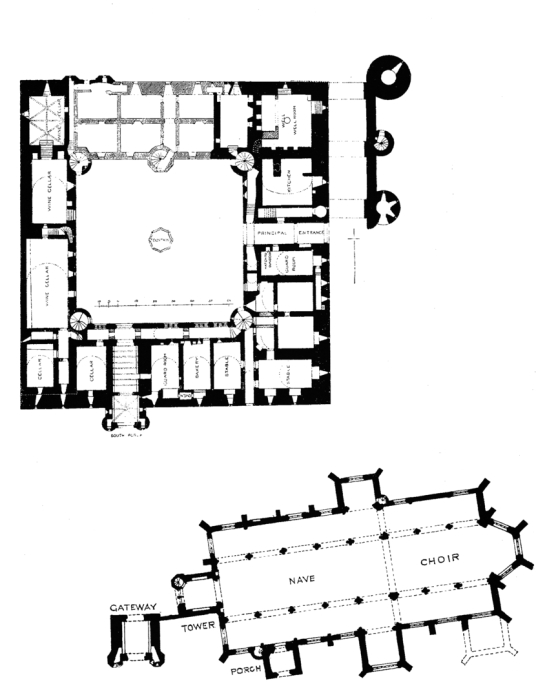 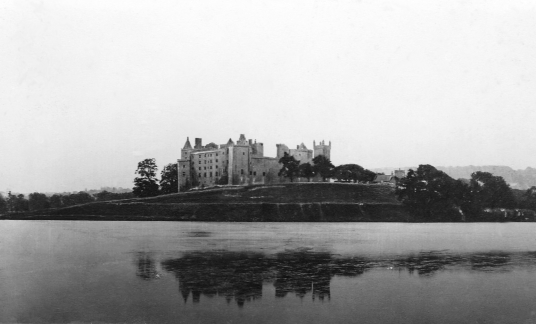 There is a fine carved fountain in the courtyard, dating from 1538, which has recently been restored to working order. 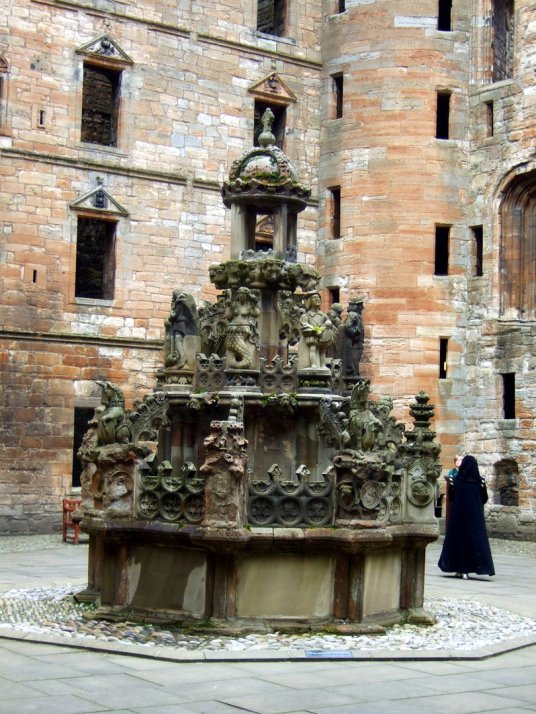 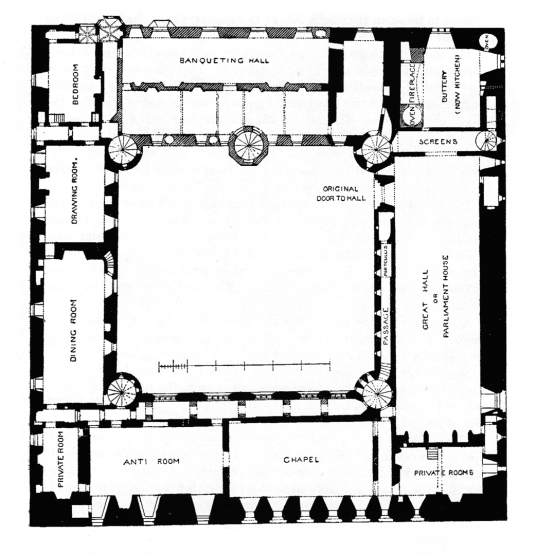 The main entrance was originally to the east and dates from the 15th century, but this moved to the south in the 16th century. The north range collapsed at the beginning of the 17th century and had to be rebuilt.
The small gatehouse, dating from the 16th century, defends the entrance to the palace and has gunports as well as painted panels for the orders of knighthood bestowed on James V: The Golden Fleece, St Michael, The Garter, and The Thistle. 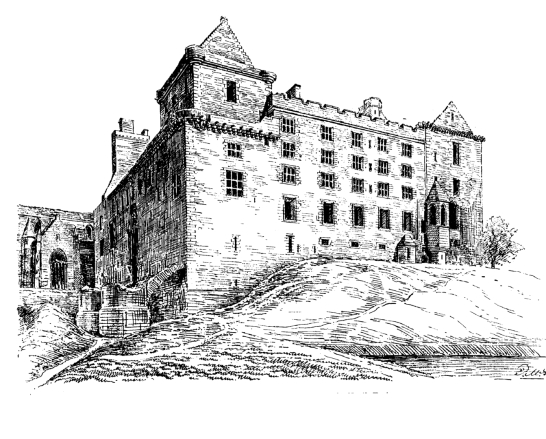 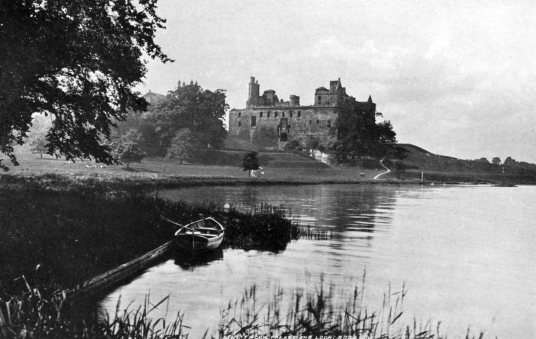 The palace and palace park are prominently marked on Blaeu’s map of The Lothians and Linlithgow to the north of ‘Linlithgo’. 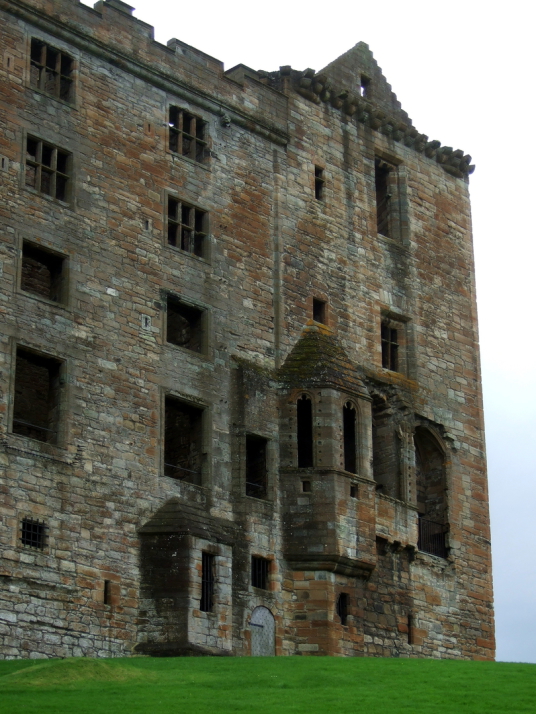 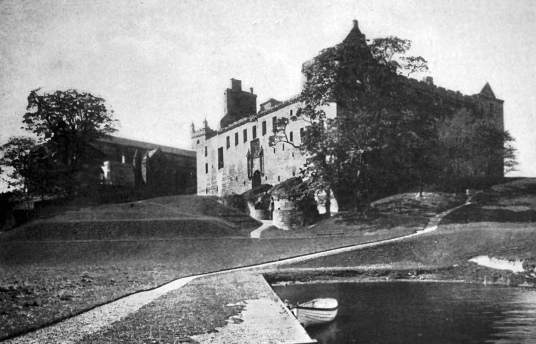 There was a 12th-century castle here, which was captured and strengthened by Edward I of England in 1301 during the Wars of Independence, then known as the Peel of Linlithgow. It was slighted, after being retaken by the Scots by driving a cart under the portcullis, and remained a ruin until about 1350. It was repaired by David II, then mostly rebuilt by James I at the beginning of the 15th century. It became a favourite residence of the kings of Scots, and the work continued under James III and James IV. James V was born here in 1512, then Mary, Queen of Scots, was in 1542 and she also visited in 1562. 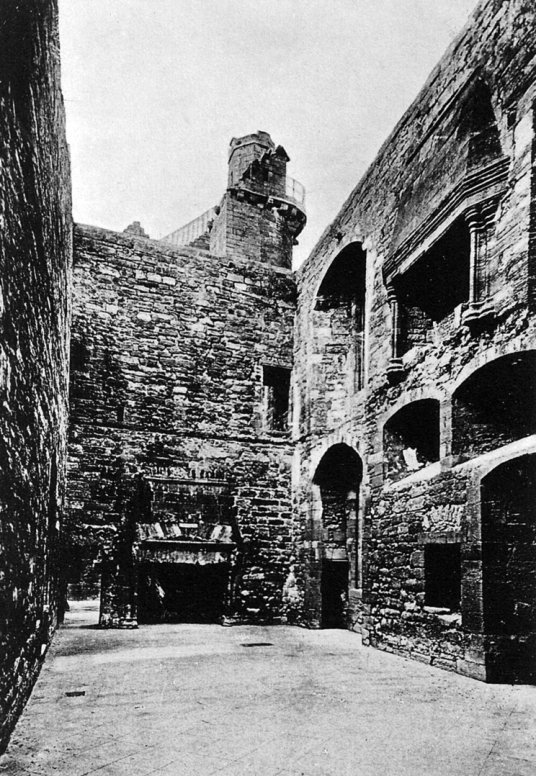 THE WORKS OF LINLITHGOW

Item, for 6 cartloads of stones, 4s. Item, delivered to the wrights, between 13 September and 2 October, 600 door nails at 15s per hundred, in total is 7s 6d. Item, 50 flooring nails, 50d. Item, taken from the smith, 4 hooks for the lodge door, 12 for the windows, 2 for the furniture, 2 for the kitchen window, and 10 pairs of bands to go with them and nails for the bands, which amounts to 3 stones of made work, in total is 16s 6d. Item, for a lock for James Carter, 2s. Item, accounted for Steven Balty, mason, from 13 October to 19 December, being 7 weeks, he talking 14s each week for himself and his apprentice and 7s for his servant, which is 21s each week, in total is £7 7s. Item, for a boat to pass up the water with 36 Estland boards to Linlithgow, 8s. Item, for the said boat to go for hides to Leith, 7s. Item, to Steven Balty for stuff bought by him for the wrights and masons, furnishing and all other necessaries in Linlithgow during the said time of 7 weeks, after his account made thereupon, by the king’s command, £15 15s. Item, to James Carver for 7 weeks immediately after Whitsun, he working at Linlithgow, at the king’s command, £12 16s 4d. 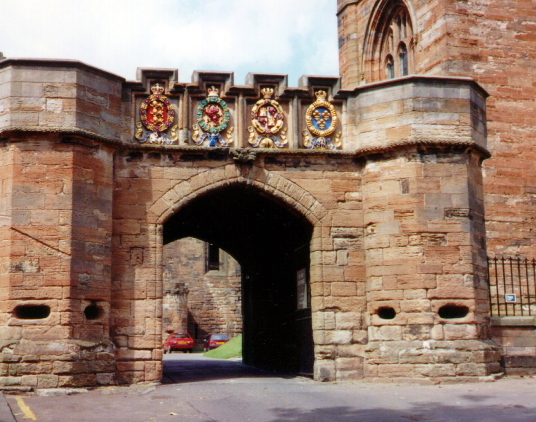 After the Union of the Crowns in 1603, the palace was left in charge of a keeper and the north range collapsed and was rebuilt for James VI. 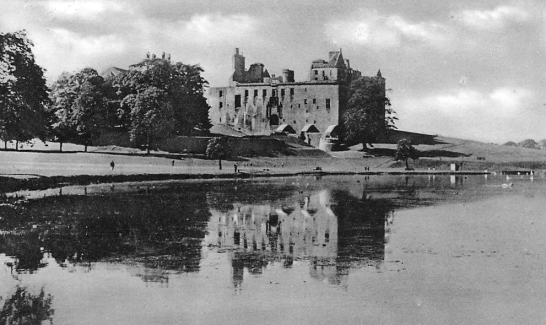 It was last used by a monarch, Charles I, in 1633, although his son, James, Duke of York, stayed here before succeeding to the throne as James VII in 1685. In the 1650s, Cromwell had garrisoned the palace. It was also visited by Queen Anne with her father in the 1680s, Bonnie Prince Charlie in 1745 and the Duke of Cumberland. 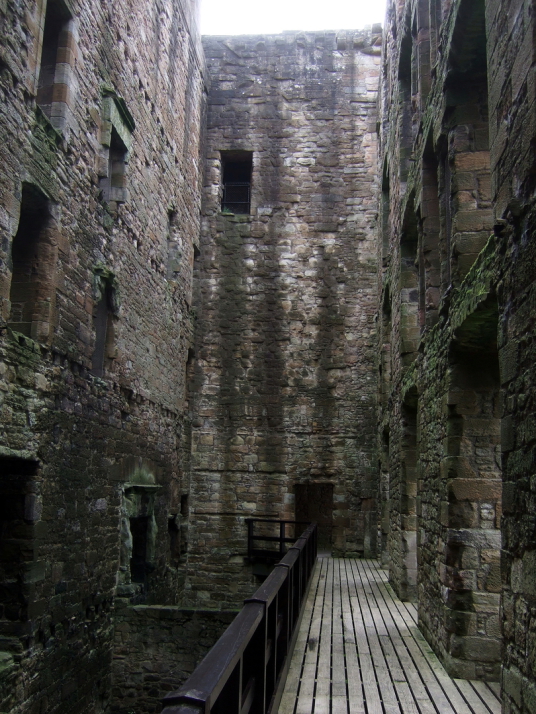 In 1746 General Hawley retreated here after being defeated by the Jacobites at the nearby Battle of Falkirk. The soldiers started fires to dry themselves, and the palace was accidentally set blaze. It was never restored.

The ruin was used as Wentworth Prison in the TV series Outlander, and is a location in the Netflix movie about Robert the Bruce, Outlaw King. 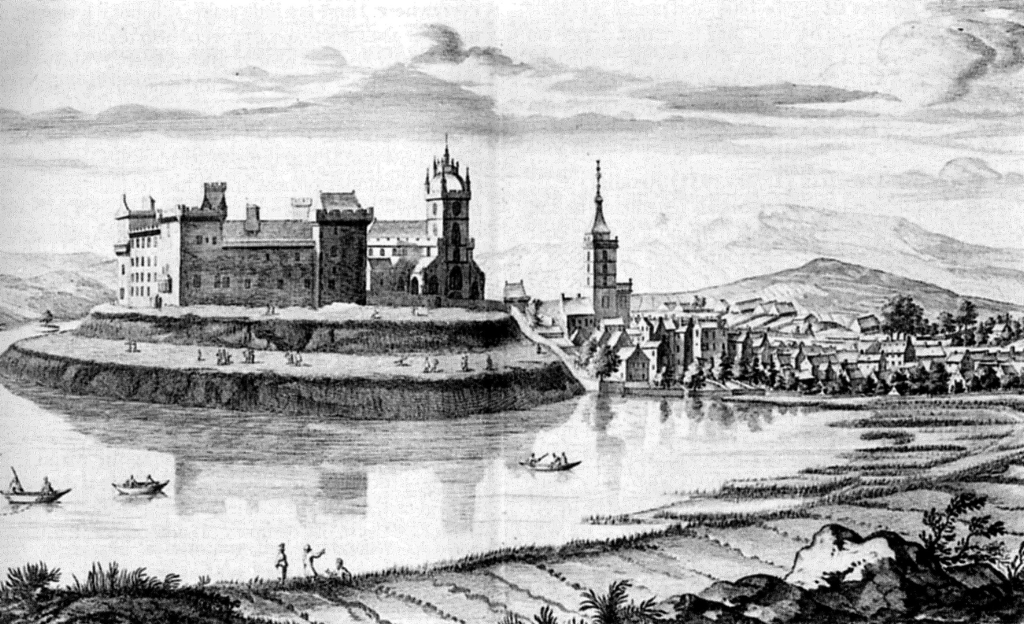 The palace is said to be haunted by a ‘Blue Lady’, who walks from the entrance of the palace to by the door of the nearby parish church of St Michael, said to be seen at around 9 o’clock in the morning in April or September. 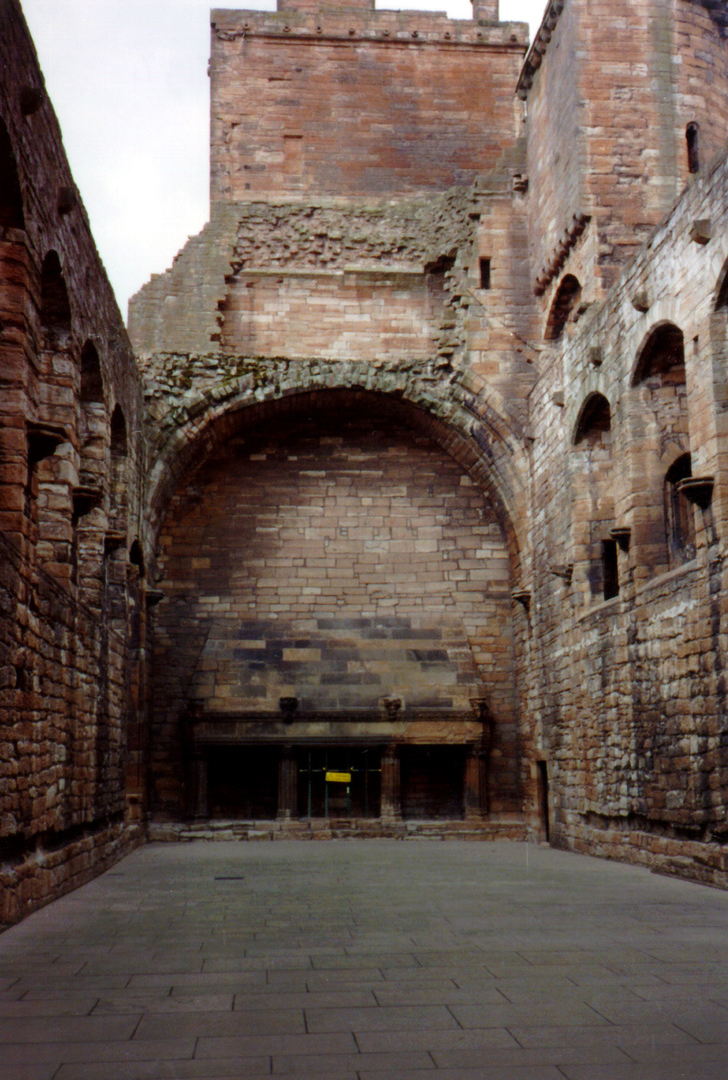 Queen Margaret’s bower, at the top of one of the stair-towers, is reputed to be haunted by the ghost of either Margaret Tudor, wife of James IV, or Mary of Guise, wife of James V, although – it has to be said – neither candidate seems very likely. The apparition is described as a ‘White Lady’ in one account, and to be accompanied by a smell of perfume. An apparition of Mary, Queen of Scots, is also reputed to have been seen praying in the chapel. 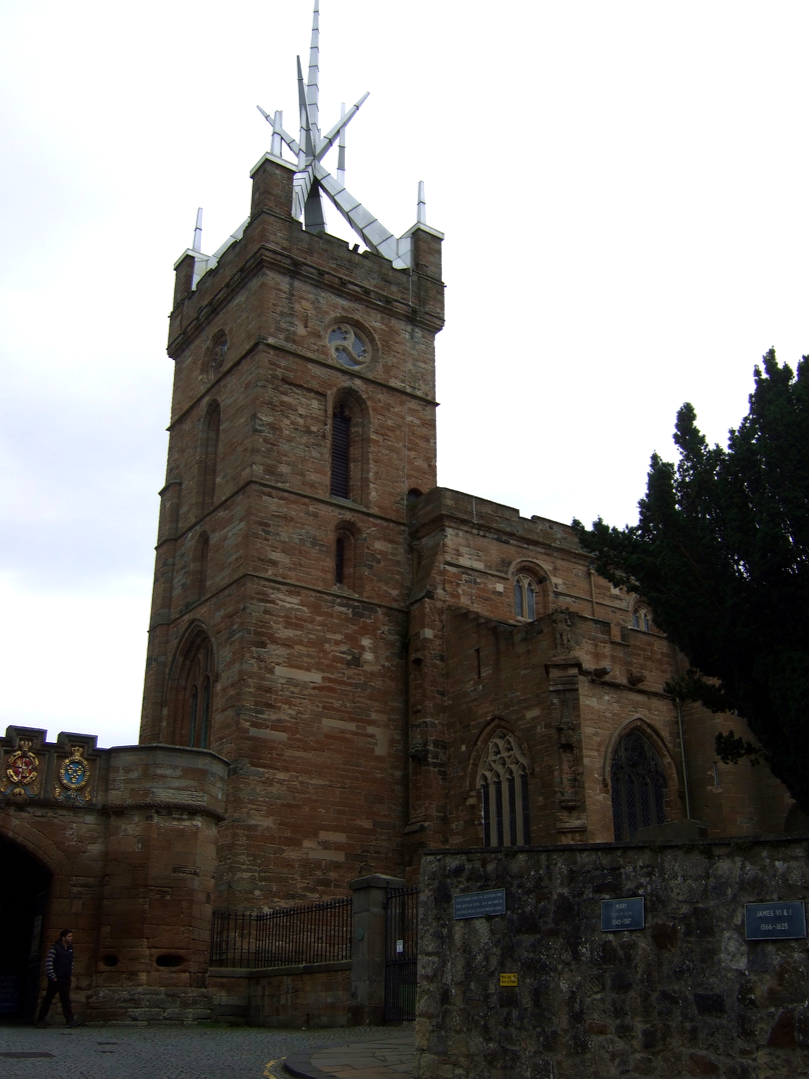 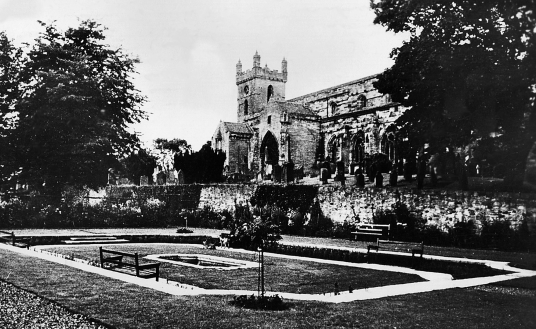 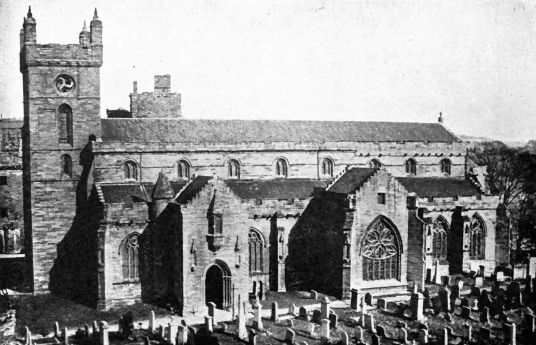 It was in the adjacent parish church of St Michael [NT 003773] that a blue-robed apparition is said to have warned James IV not to march into England – but the King ignored the warning, invaded England, and was killed at the disastrous Battle of Flodden in 1513. The church is a fine building.