Argyll & Dunbartonshire: About 5.5 miles south-west of Arinagour on island of Coll, on minor road south of B8070, north of Loch Breachacha, near modern Breachacha Castle.

View from exterior (privately owned). Ferry to Arinagour on Coll from Oban (CalMac). 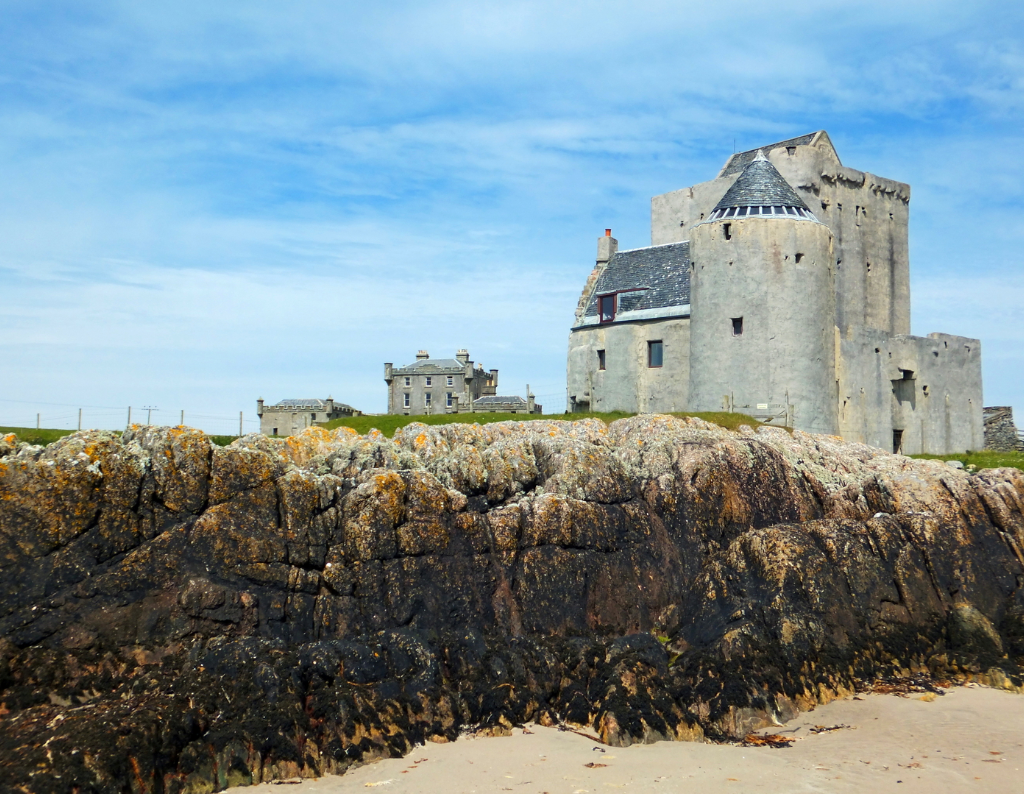 On the edge of the bay with a beautiful sandy beach, Breachacha Castle, built in the 14th century, consists of a square tower of four storeys and a gabled garret within a later parapet. It stands at one corner of a courtyard enclosed by a curtain wall, with a round tower at one corner and a range of buildings. A machicolation defends the entrance, and there is an artillery fortification. 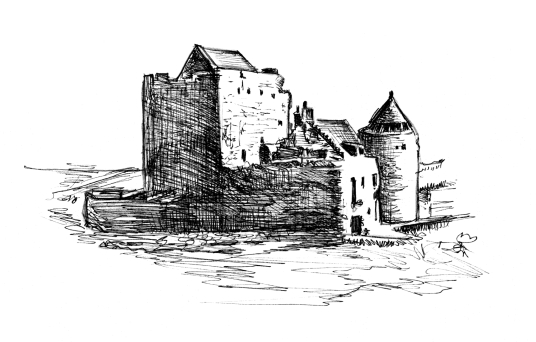 … earliest description … in an official document, written between 1577 and 1595: ‘The laird of Collow [Coll] hes ane castell callit Brekauche [Breachacha], quhilk is ane great strenth be reason of the situation their of verie neir to the sea, quhilk deferidis the half thairof, and hes three walls about the rest of the castell and their of biggit with lyme and stane, with sundrie gude devices for defending of the tower. Ane uther wall about that, within the quhilk schippis and boittis are drawin and salvit. And the third and the uttermost wall of tymber arid earth, within the quhilk the haill gudes of the cuntrie are keipit in tyme of troublis or weiris.’ 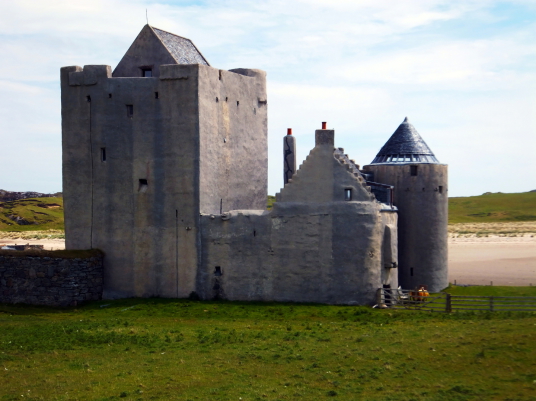 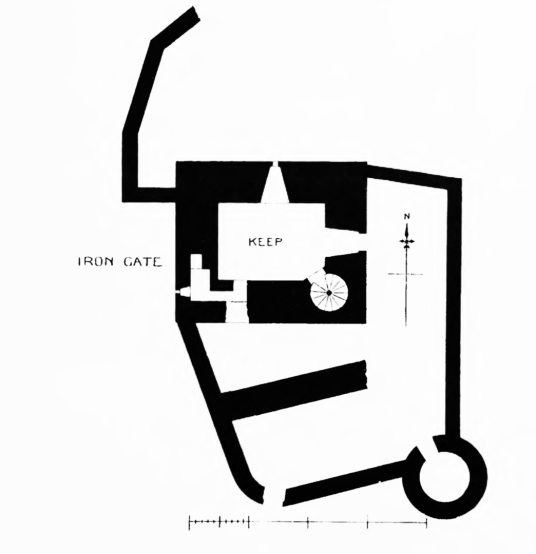 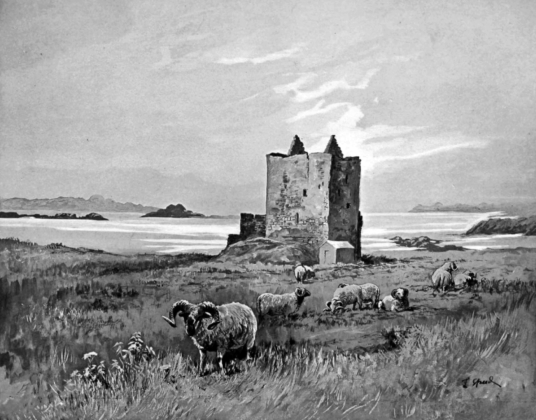 The hall, on the first floor of the tower, did not have a fireplace. A turnpike stair is topped by a caphouse. In the 17th century a three-storey block was added beside the round tower. The kitchen lay outside the walls. 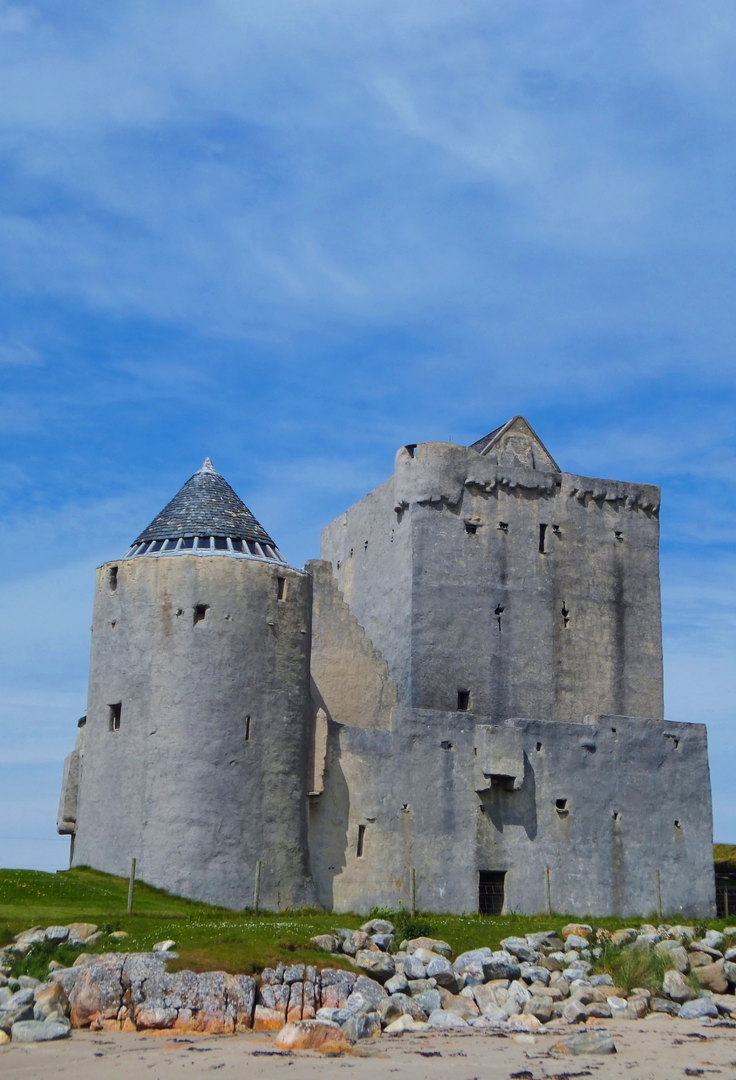 ‘Castel Brekachah’ is marked on Blaeu’s map of Mull.
Breachacha was given by Robert the Bruce to Angus Og MacDonald of the Isles, but changed hands between the MacDonalds, MacNeils and MacLeans. In 1431 it was seized by the MacLeans of Coll, but they feuded with the MacLeans of Duart, who captured the castle in 1578. 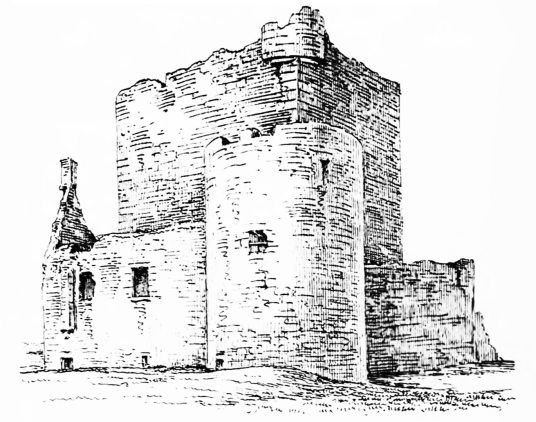 Lachlan MacLean of Coll was ‘was one of the many chiefs summoned, in 1615, to defend the islands against the inroads of Sir James MacDonald, then in rebellion. He appeared before the privy council in 1616, which bound him to exhibit annually one of his principal kinsmen; that he should reside at his castle of Breachacha, and that he should not keep more than one tun of wine.’ 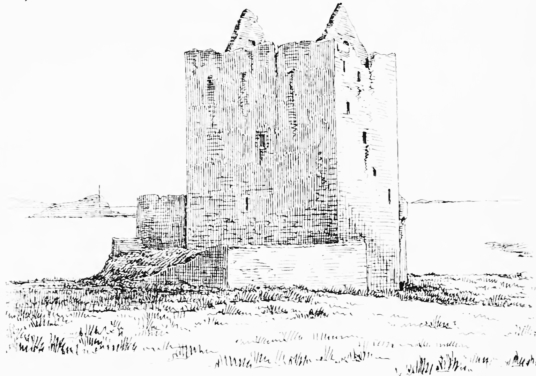 Donald MacLean of Coll garrisoned the castle against the Campbell Earl of Argyll in 1679 but surrendered and made peace with the Campbells. 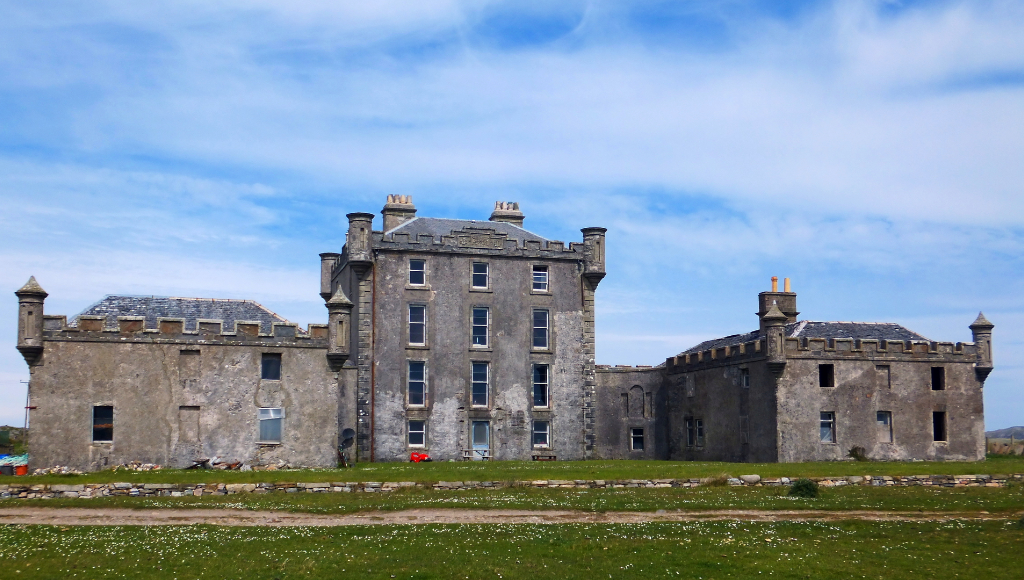 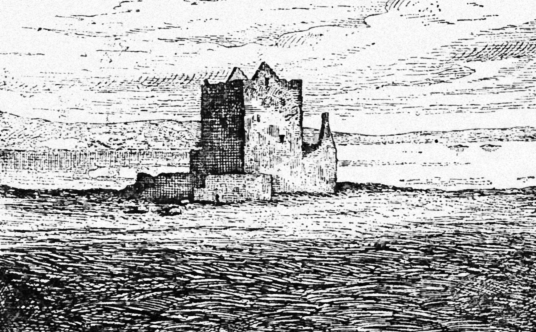 Dr Johnson and Boswell visited in 1773. ‘From Grissipol [Grishipoll] the party passed to Breachacha, where they were entertained in a pleasant new house, built by Lachlan, twelfth laird of Coll, and which was neatly furnished. The travellers early took a view of the castle, the vault in the second story then used for a prison. In one corner of this vault was a hole, then filled up, which had been used as a place of confinement for greater criminals. Near the castle was a hut in which dwelt a poor family, upon whom Johnson bestowed alms. Dr. Johnson speaks very highly of the government of the island, and is loud in his praise of the kindness of Coll to the eight hundred inhabitants.’ (from A History of the Clan MacLean, J.P. MacLean, 1889) 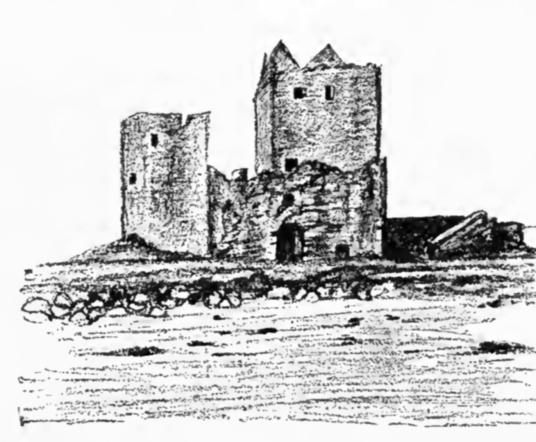 The property passed to the Stewarts of Glenbuchie in 1856, but the old castle was bought and restored by a descendant of the MacLeans in 1965. The tower has been re-roofed and the timber floors replaced, and the castle has been reoccupied and is in good condition. The newer castle is also occupied although the wings appear to be derelict and the whole edifice is in need of restoration. The new castle was on the market in 2016 for offers over £450,000. 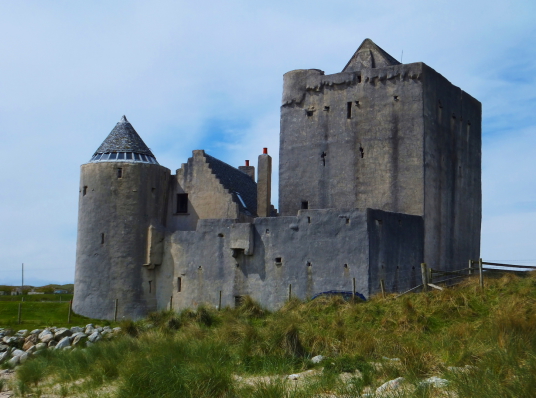 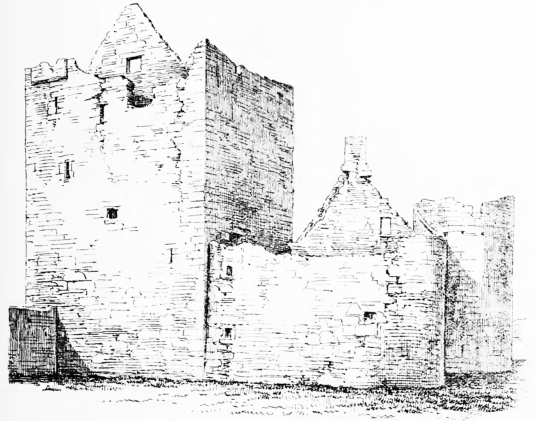 The old castle was said to have had a glasitig (that sounds in many way to resemble a gruagach). The glaistig was described in size ‘like a lump of a lassie’ and had white hair like a tuft of flax. She cleaned and ordered the castle, but also mistreated strangers and lead guests at the castle so that they became lost, although she left people she knew alone. 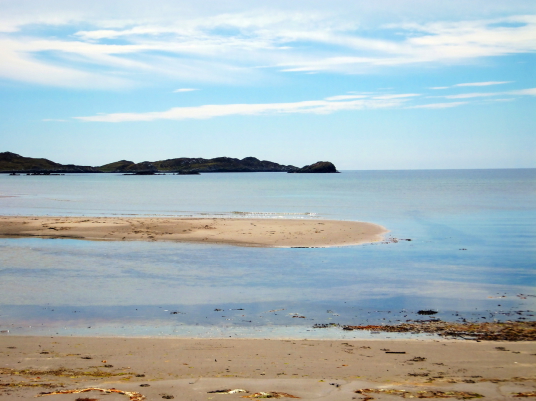