Lanarkshire & Glasgow: To east of Hamilton, on minor roads east of A72, Hamilton Low Parks, 300 yards south of Mausoleum.

Site of castle, which was almost entirely rebuilt at the beginning of the 18th century, and then again in 1822 to form a magnificent and massive classical mansion of two storeys over a raised basement. Two large wings running at right angles to the main block were of three storeys, and the main front had a grand entrance with an impressive columned porch. The whole building was demolished in 1927 because of mining subsidence, but the walls of the castle were found to be as much as 10 foot thick. Much of the furniture, paintings and porcelain from here are now on display at Lennoxlove. 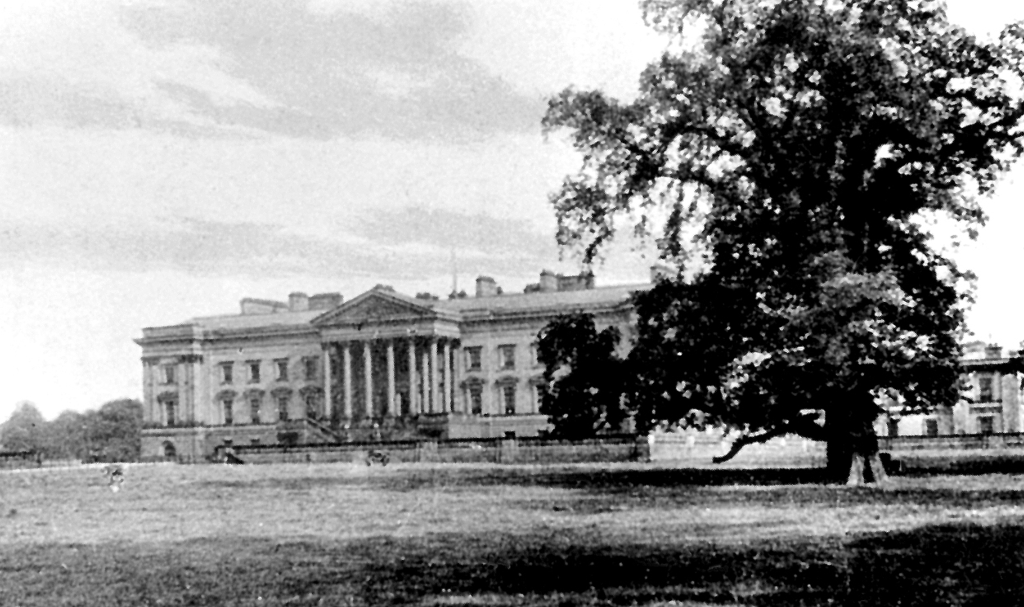 ‘Hamelton’ is very prominently marked on Pont’s map of Lanark, and is shown as a large building of three storeys with higher corner towers. The place is also on Blaeu.
The castle, first mentioned in 1455, was a property of the Hamiltons, and also known as The Orchard, who also had a stronghold at Cadzow. Mary, Queen of Scots, visited in the summer of 1563. The castle was burned down, probably by the forces of the Regent Morton in 1579, although by 1591 it had been repaired or rebuilt. The building was then developed down the centuries until little survived of the castle except foundations.
In 1695 William, 3rd Duke of Hamilton, had the architect James Smith build him what was to become one of the grandest mansions in the country. Further work took place for Alexander, 10th Duke, in the 19th century, most notably with a new facade for the north front by the architect David Hamilton. He used a William Adam design, and this was completed in 1842. The lands around the palace were purchased and cleared, creating a vast landscaped environment with a grand tree-lined avenue, leading from Chatelherault to the far end of the palace grounds.
During the setting out of Strathclyde Park, within which the palace grounds were incorporated, vaulted cellars were discovered. These were thought to belong to the original house. They were infilled with rubble.
Clustered around the palace site various other places from the old town are recorded. These include the Bishop’s Gate, tolbooth and the collegiate church. Other places of interest the massive and elaborate Dukes of Hamilton Mausoleum [NS 723563] and the Mote Hill [NS 727566]. The mausoleum was built by Alexander, 10th Duke of Hamilton, and is a magnificent building, some 120 foot high, with a prominent dome and oculus, begun in 1840 and finished five years after the Duke’s death. It has bronze doors and a fine interior. The 10th Duke and many of his ancestors were interred here, but when the building was found to have subsidence and was prone to flooding, his remains and the others were relocated to a cemetery.