Coxton Tower is a well-preserved and scenic old tower house of the Innes family, located near Elgin in Moray in northeast Scotland. 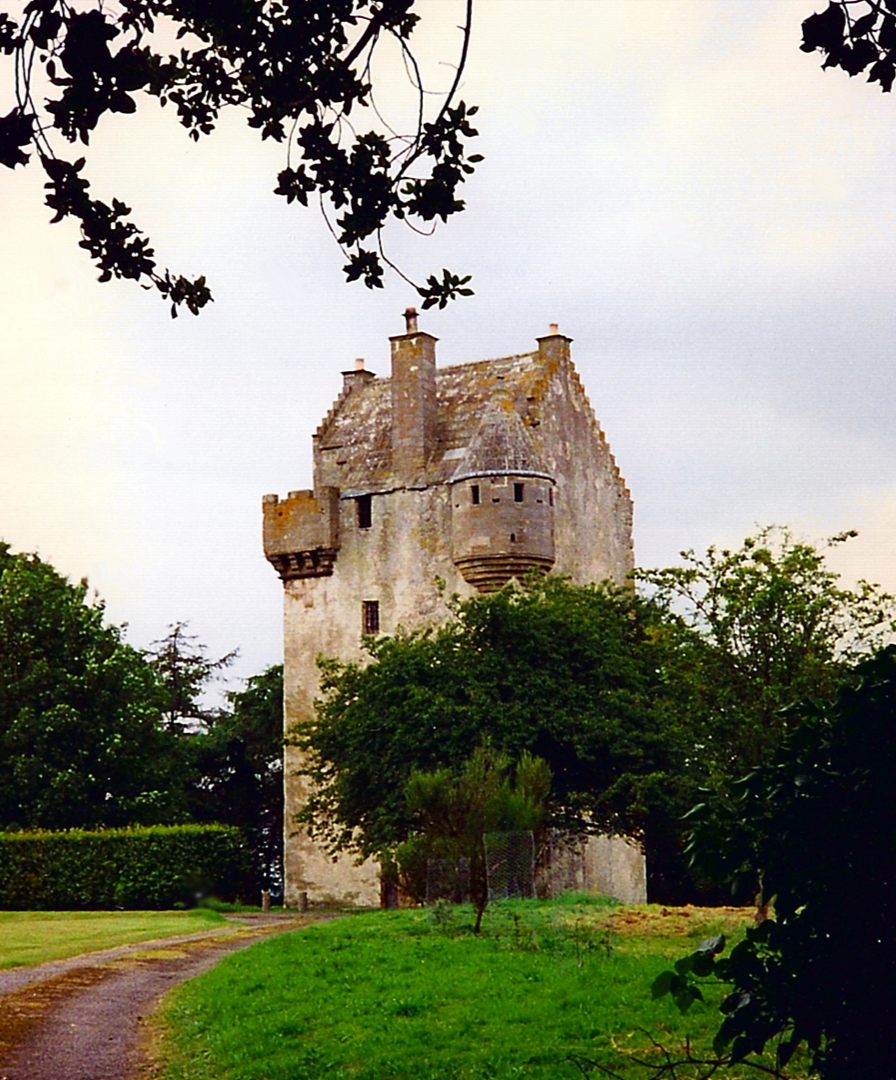 Moray: About 3 miles east and south of Elgin, just south of B9103 0.5 miles south of junction with A96, Coxtontower, at Coxton Tower.

Colour photo as captioned by (© and many thanks) Tom Wolf www.tom-wolf.com 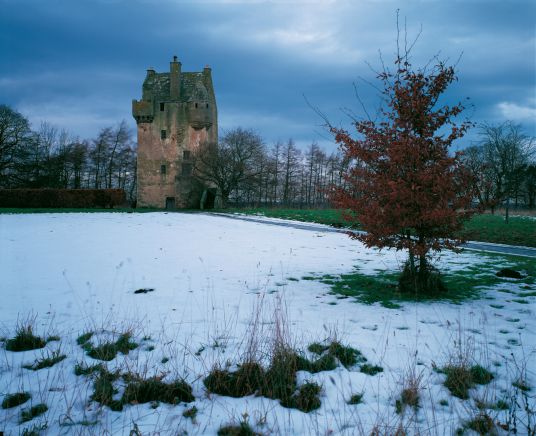 Set in wooded policies, Coxton Tower is a tower house, square in plan, of four storeys. It is roofed with stone slabs, and has corbiestepped gables, the pitch of the roof being steep. The bartizans are stone roofed, and there is a corbelled-out open round at one corner. The thick walls are pierced by small windows, some still with iron yetts, and many shot-holes. 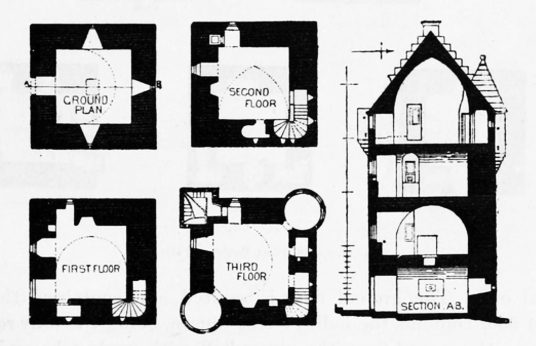 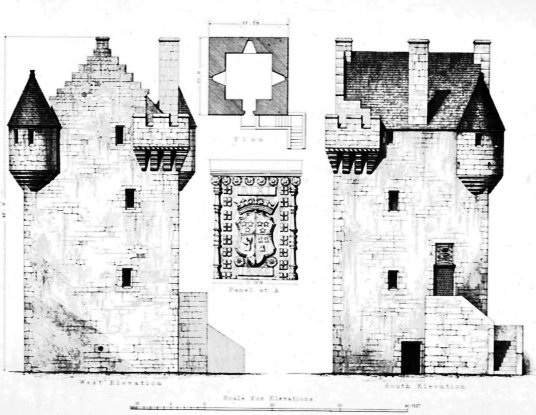 The tower is dated 1644 and is usually attributed to around 1612, although it is considerably older, dating from the 16th century or earlier. An armorial panel with 1644 has the initials RI (Robert Innes of Invermarkie) and AI for Alexander Innes (who held the tower) with IR and KG, his two wives, Janet Reid and Kate Gordon. 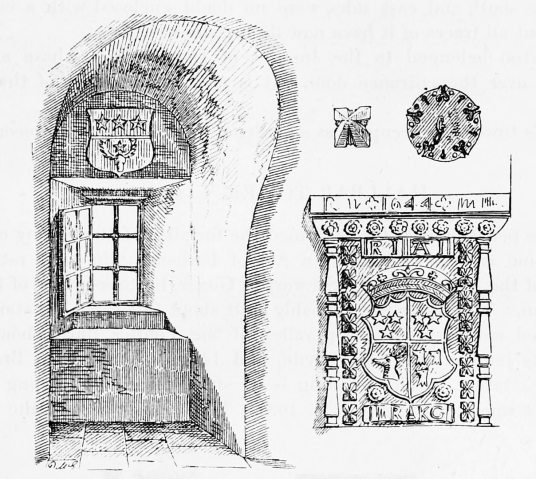 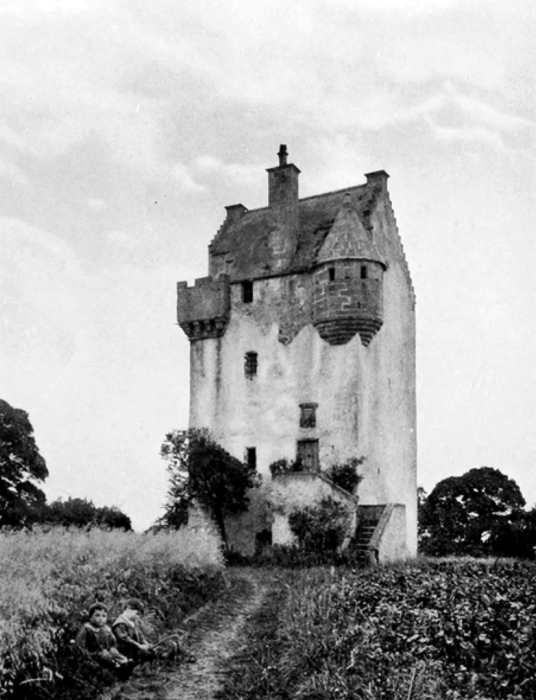 The place is marked on Pont map of Moray as ‘Cokstou’, where it is depicted as a tower of four storeys in a courtyard. 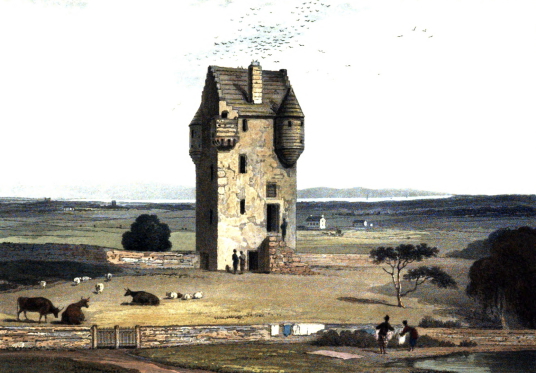 All the floors are vaulted, including the top storey to carry the heavy stone roof, making the tower effectively fire proof. Although there is now an entrance to the basement, this was probably inserted later: the original entrance was at first-floor level, and is now reached by an external stone stair of about 1846. This leads to the hall, and to the stair in one corner. The hall has a panel with the arms of Sir Alexander Innes and Mary Mackenzie of Coul, dating to 1647 or later. The tower had a courtyard. 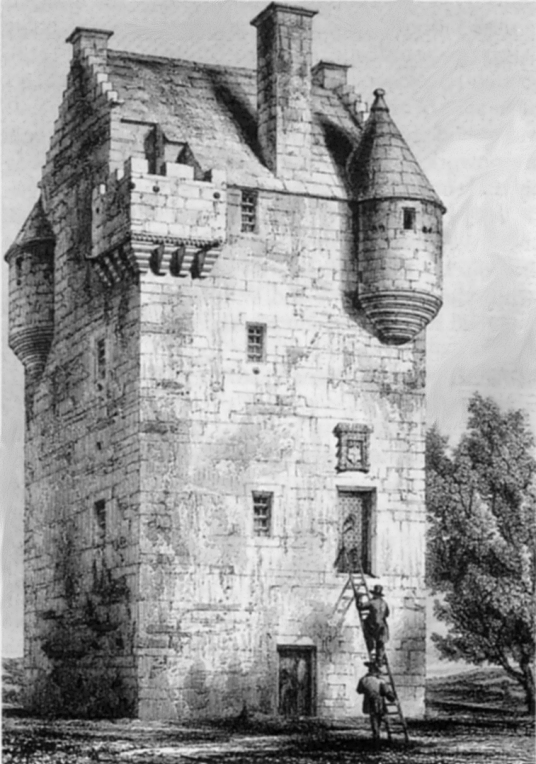 This was a property of the Inneses of Invermarkie from 1523, and the tower was apparently torched in 1584 during a family dispute. Sir Alexander Innes of Coxton was made a baronet of Nova Scotia in 1685-6. 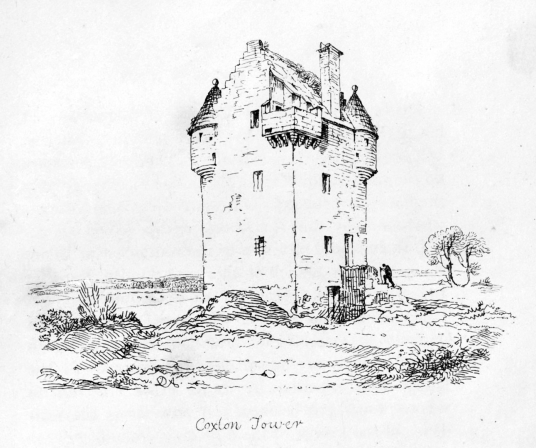 The Inneses of Coxton were Jacobites and fought on the side of Bonnie Dundee, then supported the 1715 and 1745 Risings. The property was sold to the Duff Earl of Fife, who built a new house nearby. The tower is roofed, and in excellent condition.

The family of Innes of Coxton, baronets, flourishes, but now live in Middlesex. 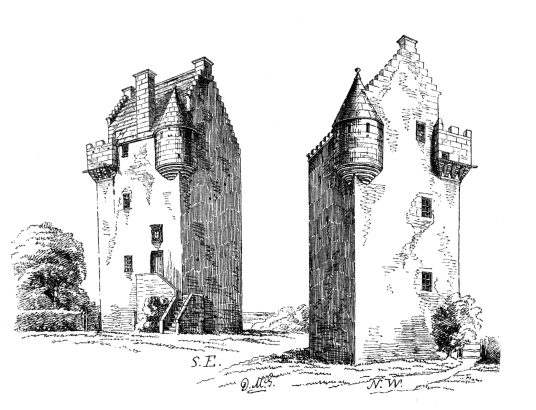 The family had a walled burial enclosure at Lhanbryde [NJ 272613], and there is a grave slab of 1612 commemorating Sir Alexander Innes of Coxton. There is also a mural tomb with the stone effigy of a knight, and two panels, which are dated 1580 and 1612.