Ayrshire: About 1.5 miles north of Irvine, on minor roads north of B7080, south of Lugton Water, near Eglinton Park visitor centre, at Eglinton Castle. 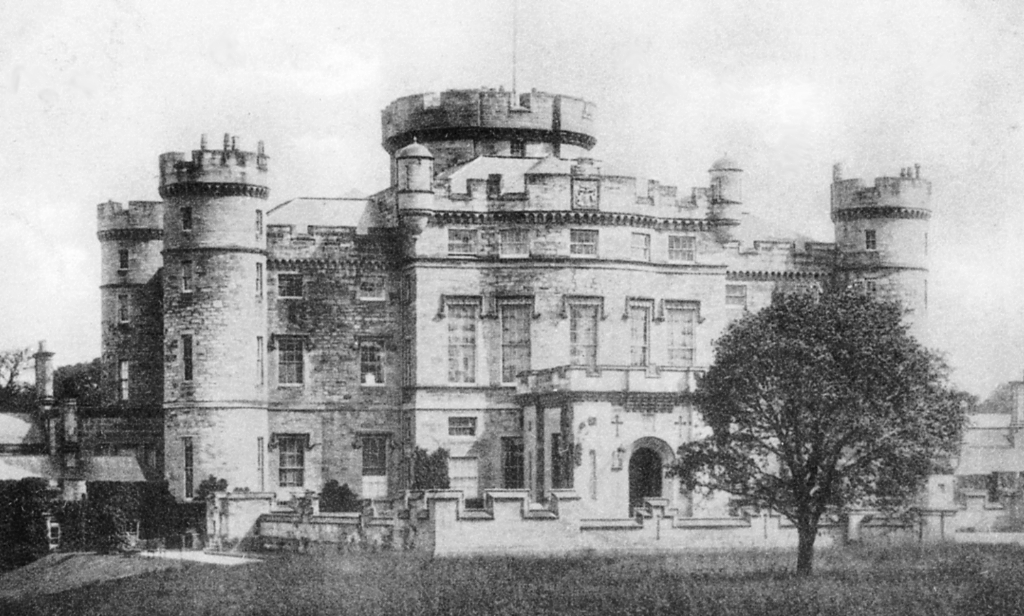 Standing in a public park, Eglinton Castle, a huge but very ruined 18th-century and later castellated mansion, was built on the site of a 16th-century stronghold. The place is very prominently marked on Blaeu’s map of Cunningham, shown as a huge tower in wooded and enclosed policies and marked in capitals as ‘Eglintoun’. 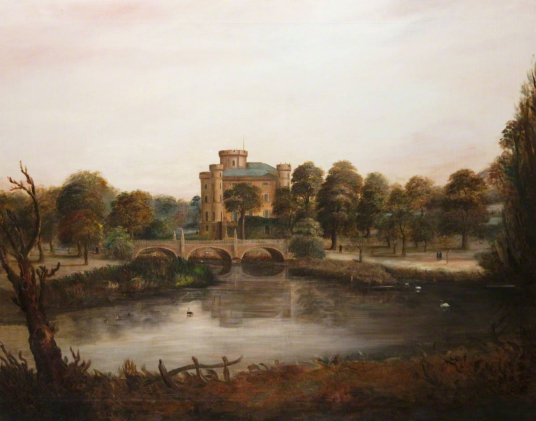 The property passed by marriage, along with Ardrossan, from the Eglintons to the Montgomery family in the 14th century, and Hugh Montgomery was made Earl of Eglinton in 1508. The family long feuded with the Cunningham Earls of Glencairn (Maxwelton). The castle here was burnt in 1528 by the Cunninghams in retaliation for the sacking of Kerelaw Castle. Hugh, 2nd Earl, supported Mary, Queen of Scots, and fought on her side at the Battle of Langside in 1568. He survived the battle but was imprisoned in Doune Castle, although he was later released. 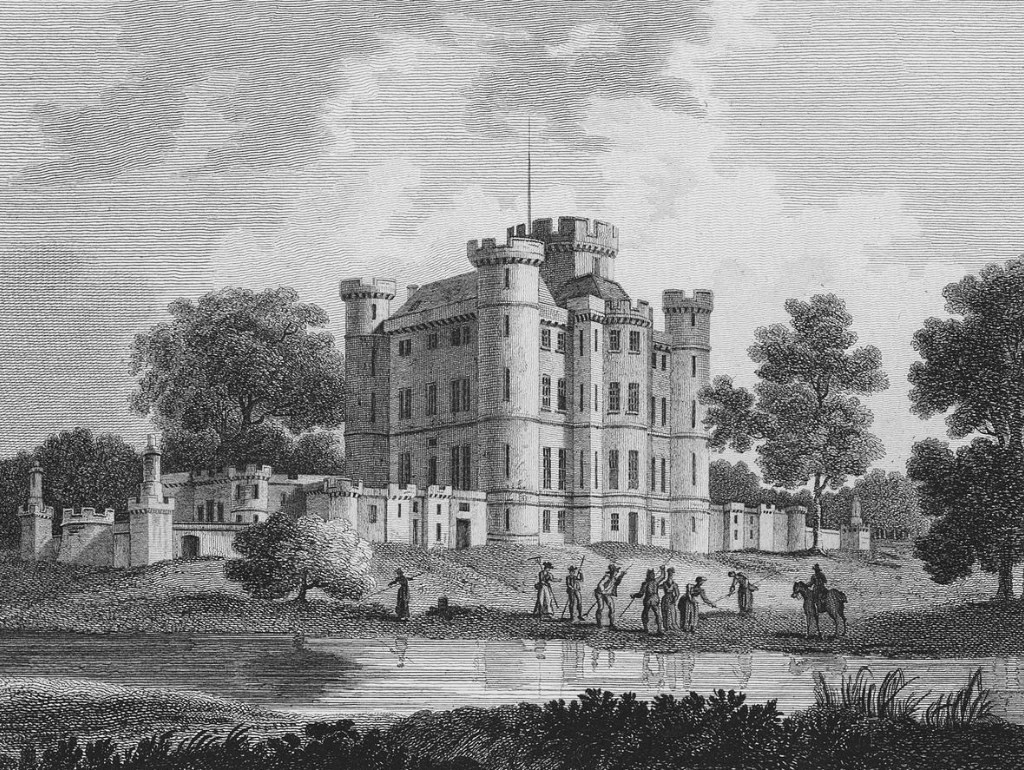 Hugh, 4th Earl, was murdered near the bridge of Annick in 1586 by the Cunninghams of Clonbeith and of Robertland, and others of that family (also see Lainshaw Castle). The Montgomerys killed every Cunningham they could find, and cut John Cunningham of Clonbeith to pieces. Alexander, 6th Earl, was imprisoned for supporting Charles II in 1659, but the family backed the government in the Jacobite Risings. 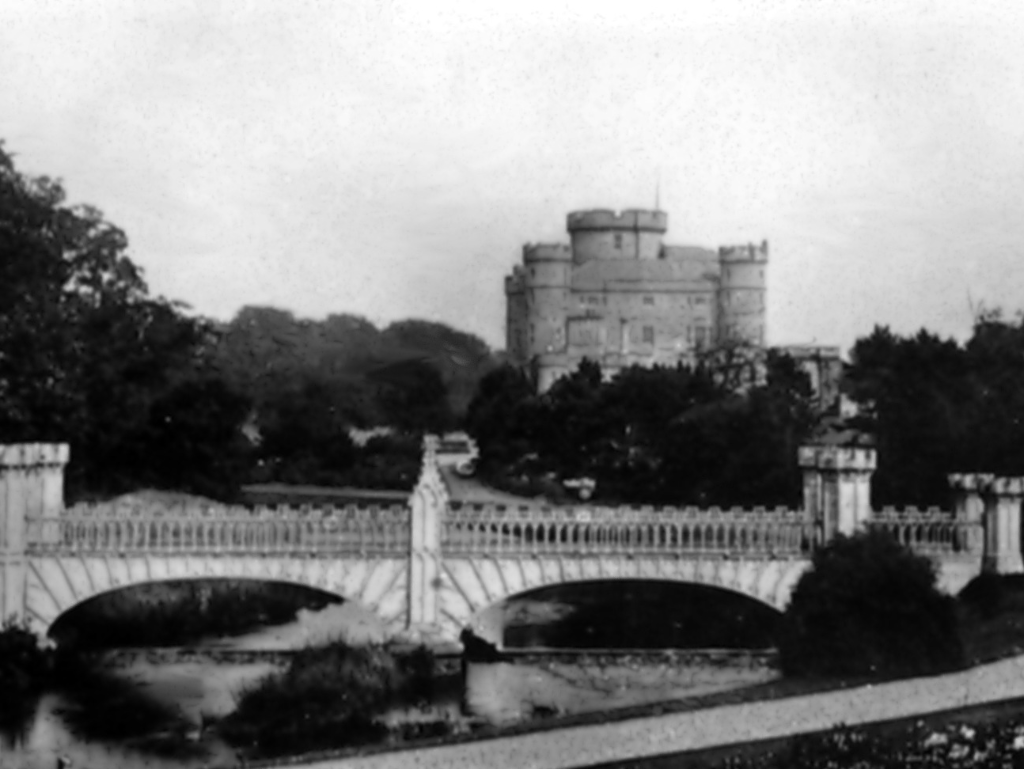 The castle was replaced by a large mansion in 1802, and it was at the new castle that the Eglinton Tournament was held in 1839, a medieval tournament, attracting thousands of visitors.

Colour drawings from, An account of the tournament at Eglinton by Gordon W. Aikman, 1839 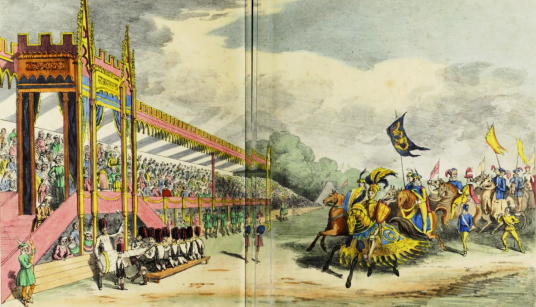 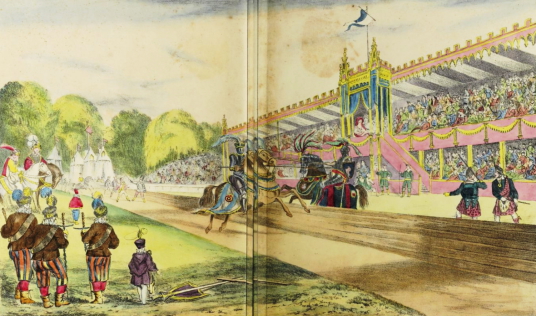 Eglinton Castle: Knights tilting in the view of the grandstand, Eglinton Tournament 1839 (Aikman, 1839) 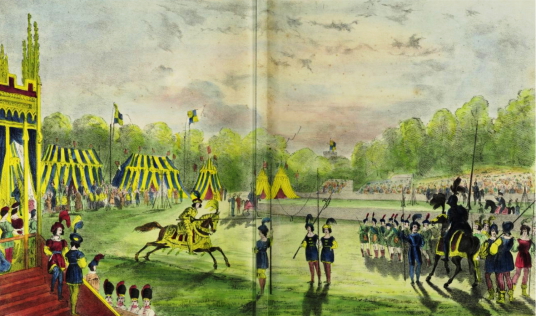 Eglinton Castle: The lord of the tournament tilting at the ring, Eglinton Tournament 1839 (Aikman, 1839)

However, the house was abandoned when the family ran out of money building the harbour at Ardrossan. The house was unroofed in 1925 to be used for target practice, was blown up in the 1950s, and the shell of the house was partly demolished in 1973. All that survives is a single corner tower and some low walls. The family are now represented by the Montgomerie Earls of Eglinton and Winton, and they now live near Cargill in Perthshire. There is information about the Montgomerys in the visitor centre.
There is a story of an underground tunnel leading away from the castle.
There are also  tales that the ruins of the castle are haunted, although some paranormal investigators were more spooked by local yoots than bogles.