Argyll & Dunbartonshire: About 1 mile north-west of Oban, on minor road and foot north of A85 in Oban, on headland just east of sea, at Dunollie Castle. 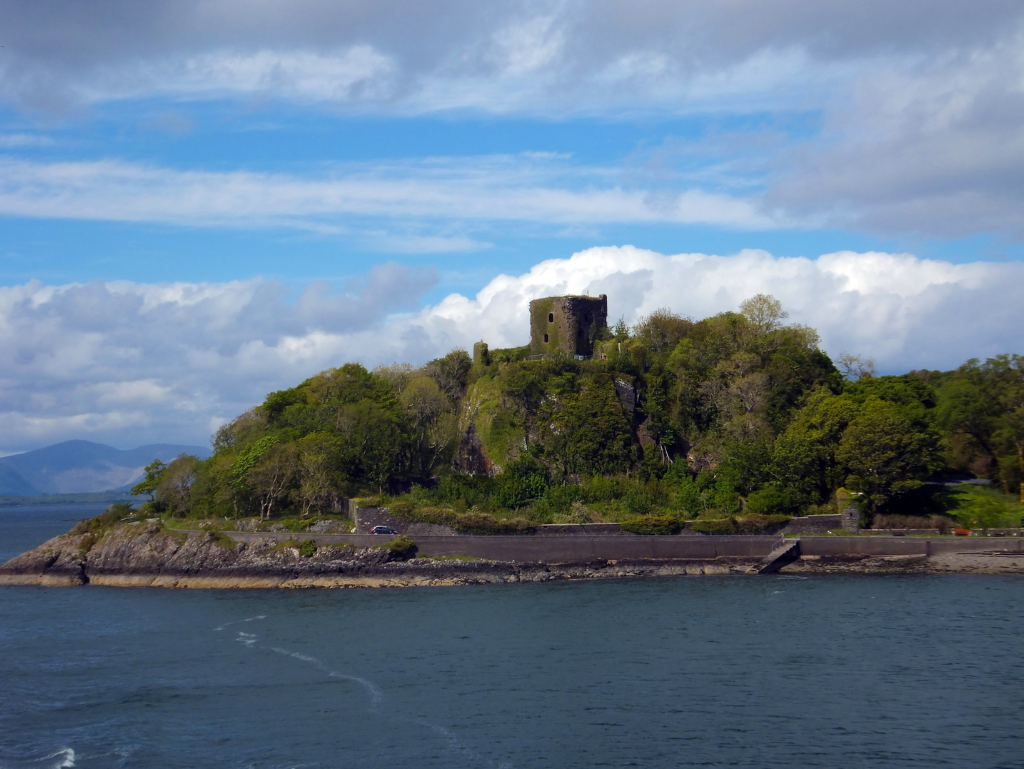 Standing on a rocky ridge overlooking the sea, Dunollie Castle consists of a 13th-century castle of enclosure and a 15th-century tower of four storeys. Ranges of buildings once stood in the courtyard, but these are mostly ruined and overgrown. 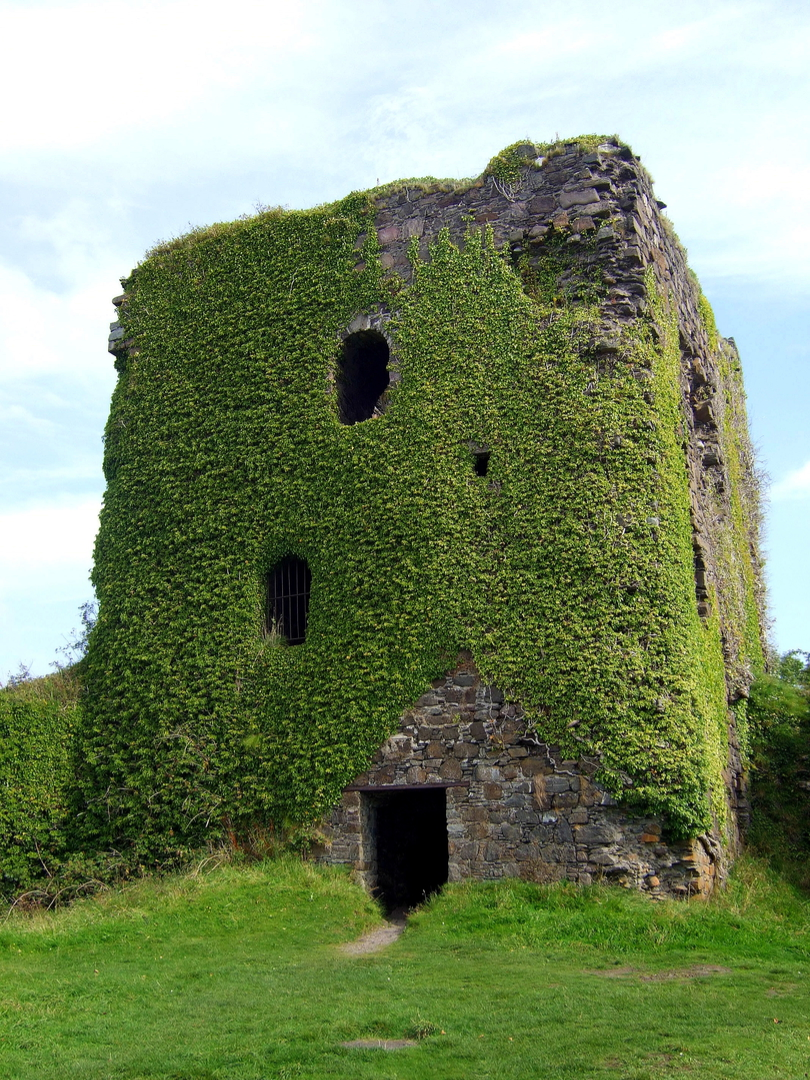 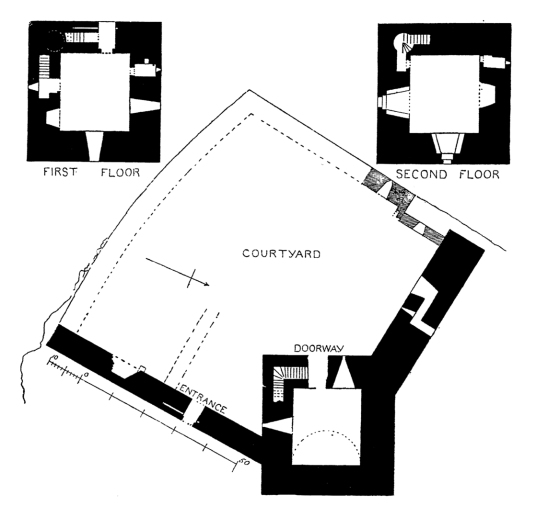 The tower had a vaulted basement. There was a lesser hall on the first floor, and a main hall on the second floor, reached by two straight stairs. A turnpike stair led to the upper chambers. 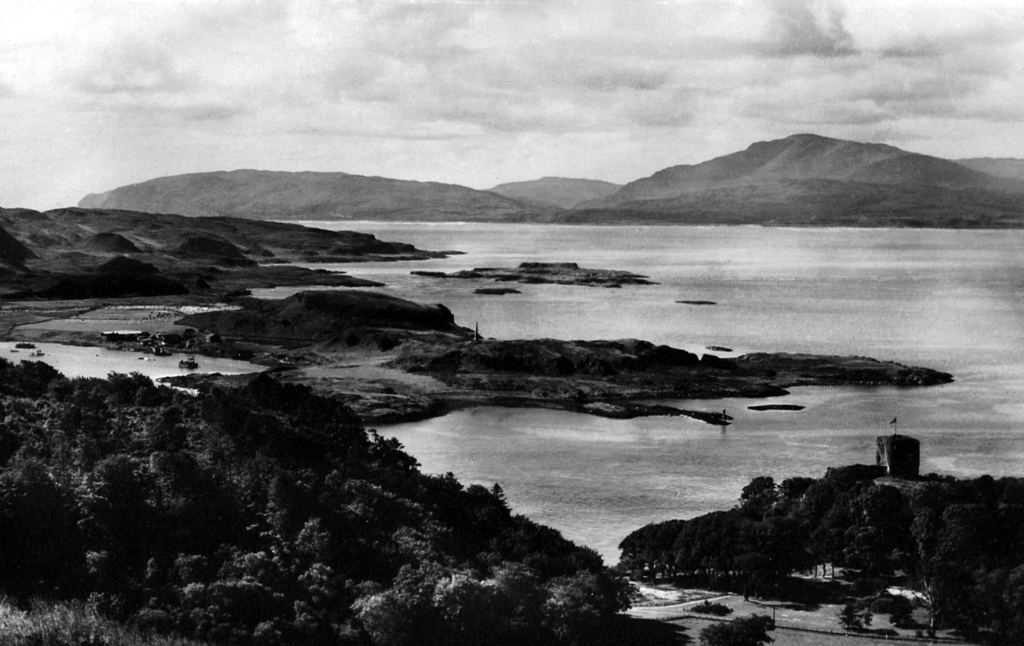 Dunollie Castle and Kerrera across to Mull (old postcard)

The place is marked as ‘Dounoldy’ on Blaeu’s map of Lorn and is depicted as a tower on a hill. 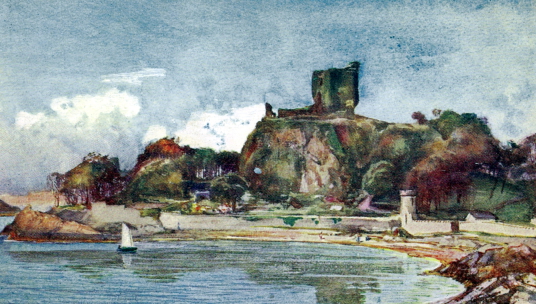 In 698 Dunollie, then a fortress of the kings of Dalriada, was captured and destroyed. The present castle was built by the MacDougalls of Lorn in the 13th century, direct descendants of Somerled, and one of the most powerful families in Scotland at that time. 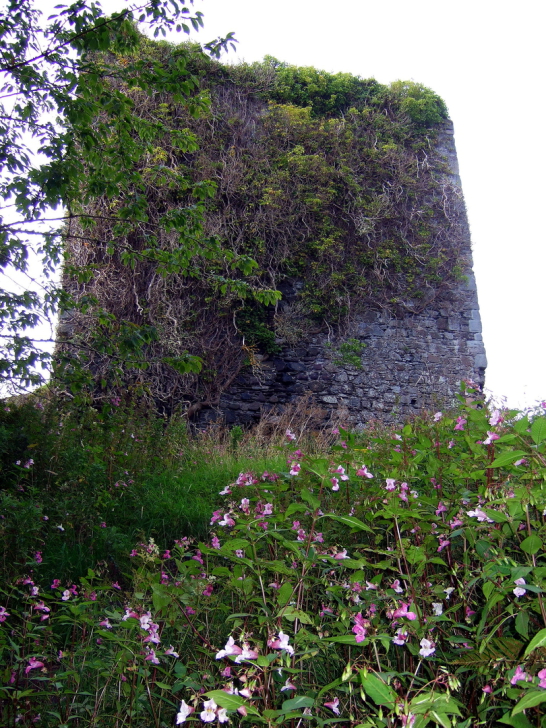 The MacDougalls were bitter enemies of Robert the Bruce. A MacDougall force defeated Bruce at Dalry in 1306, nearly killing him and wrenching a brooch from his cloak. This brooch become known as the Brooch of Lorn and was kept at the castle, then at Gylen Castle on Kerrera [NM 805265]. Bruce returned and ravaged MacDougall lands in 1309 after defeating them at the Pass of Brander, siezing their stronghold at Dunstaffnage. 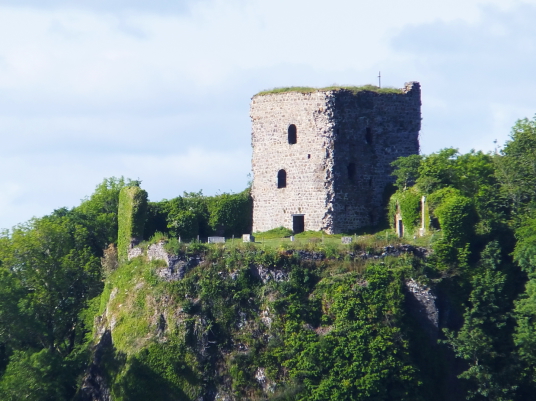 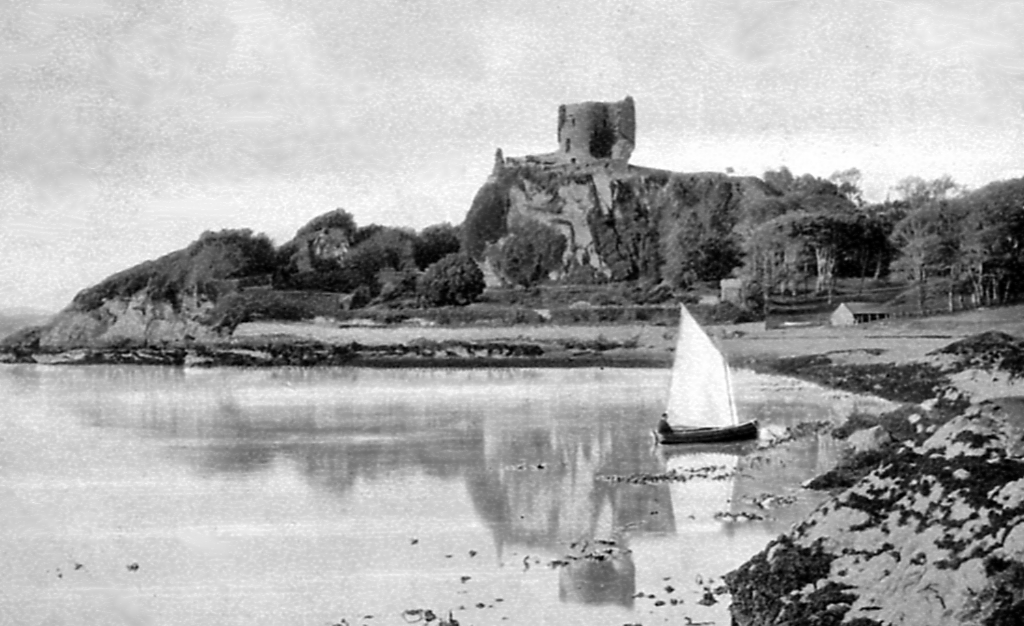 In 1644 the castle was attacked by Archibald Campbell, Marquis of Argyll, and in 1647 the castle was besieged by General David Leslie and an army of Covenanters, and was sacked and burnt. It was attacked again in 1715 when the MacDougalls were fighting for the Stewarts during the Jacobite Rising. John MacDougall of Dunollie was captured and was to be transported, but he was later pardoned. The lands were forfeited, but were restored by 1745. 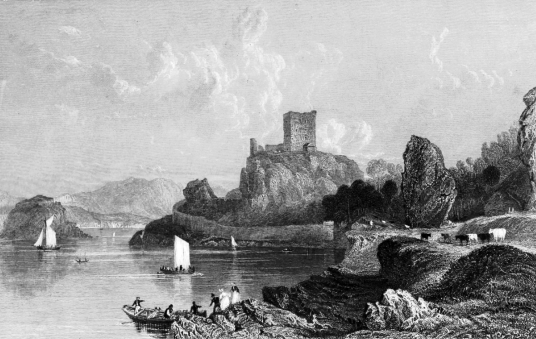 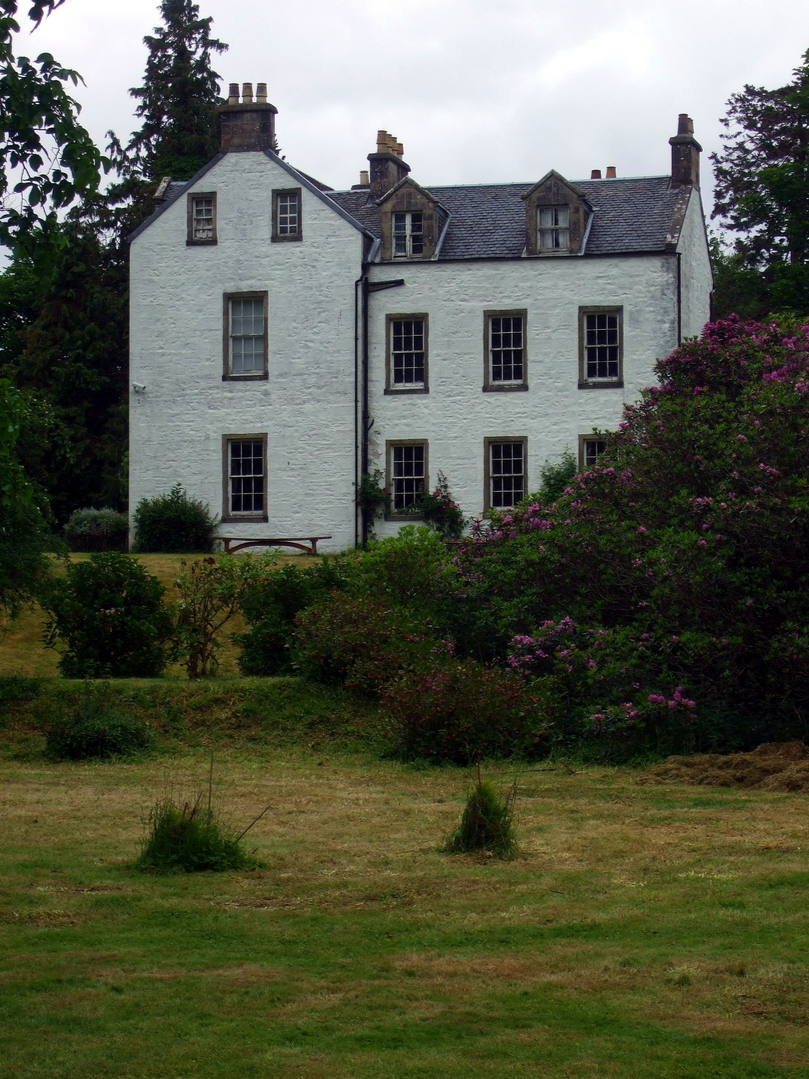 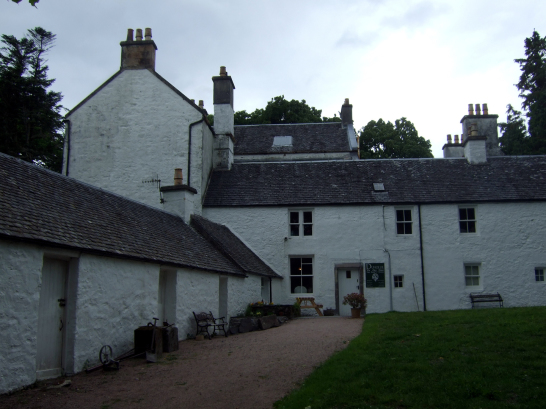 The MacDougalls built nearby Dunollie House [NM 853315] in 1746 or earlier, although there was already a house here dating from about 1600, and the old stronghold was abandoned. The newer house was remodelled and extended in 1835, and there is a museum in some of the older parts. The castle is still owned by the MacDougalls, and is being consolidated and repaired.
There are stories of a phantom piper or Highlander haunting the ruins. 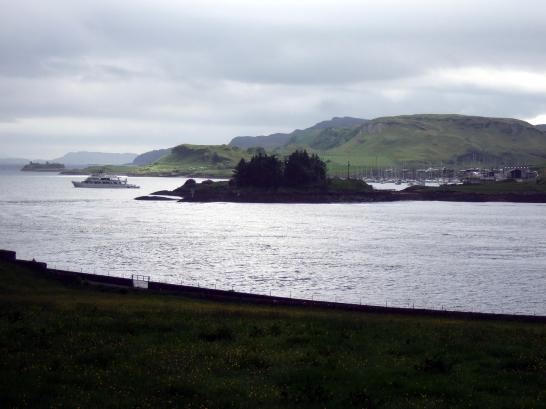