Borders: About 3 miles south of Greenlaw, on minor road west of B6364 at Hume, at Hume Castle.

OPEN: Open at all reasonable times. 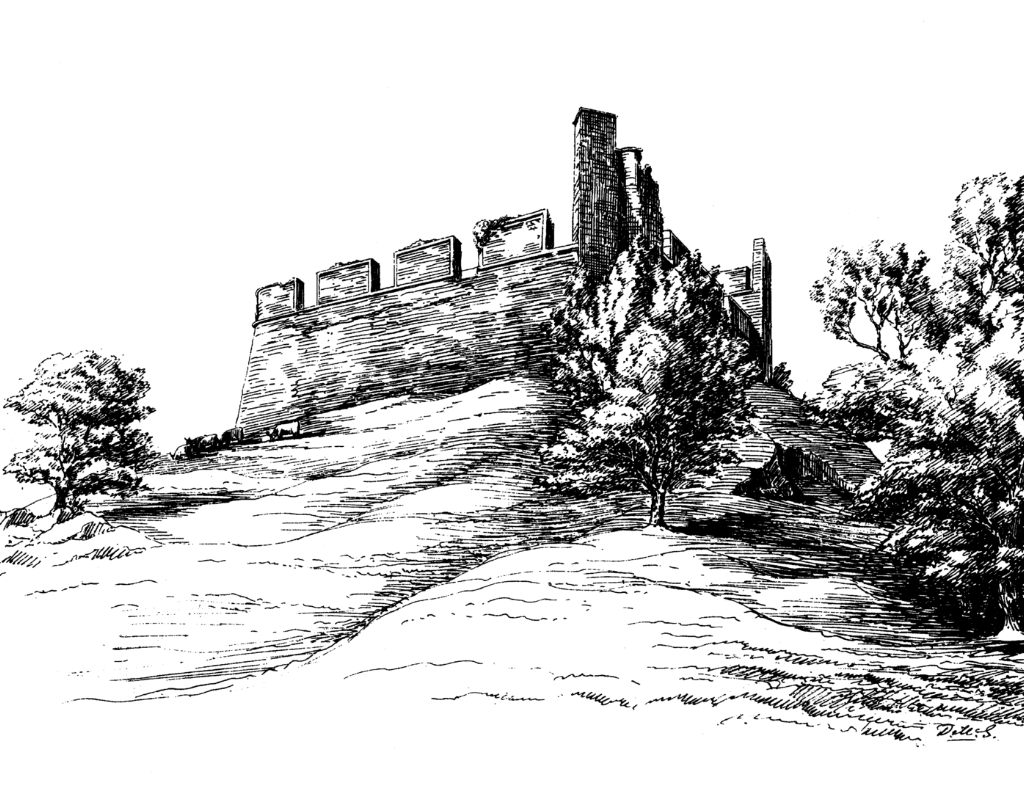 Standing on a commanding position with fine views over the Tweed valley, Hume Castle was first built in the 12th or 13th centuries, and was an important stronghold of the Home family. It was considered impregnable before the advent of gunpowder. ‘Hoome Cast’ is prominently marked as a castle on a hill on Blaeu’s map of Berwickshire. The lands were held by the Cospatrick Earls of Dunbar, and then passed by marriage to the Homes in the 13th century, and James II visited in 1460. In 1482 the castle was ordered in legislation to be garrisoned with 60 men of war.

The family were made Lords Home in 1473, and Alexander, 3rd Lord Home, led the vanguard at Flodden in 1513, although he escaped the battle with his life. The Regent Albany seized Hume two years later, ravaged the lands, and had Alexander, and his brother, executed for treason in 1516.

The village at Hume was burnt ‘to the gates of the castle’ by the English in 1544. George, 4th Lord, was killed before the Battle of Pinkie in 1547, and, after the defeat of the Scots, the English occupied the Homes’ lands, although only after overcoming stiff resistance at Hume Castle by the widow of the 4th Lord. Alexander, 5th Lord, took back their properties, slaughtering the English garrison to a man.
The castle was visited by Mary, Queen of Scots, in 1566, but the Homes fought against her at the Battle of Langside in 1568. The following year the stronghold was again besieged by the English, with artillery, and within 12 hours had surrendered. In 1573 Alexander was arrested and convicted of treason by James VI, but he died after a period of captivity.

Alexander, 6th Lord Home, was a favourite of James VI, and in 1605 was made Earl of Home. James, 3rd Earl, was a supporter of the Stewarts, but in 1650 the castle was surrendered to Colonel Fenwick, one of Cromwell’s commanders, and demolished. The family moved to The Hirsel, and the castle was not rebuilt.
The property passed to the Home Earls of Marchmont in the 18th century, and the castle, which by now was almost ‘level with the ground’, was rebuilt as a crude folly in 1794, incorporating the foundations of the old castle.
The verse:
‘I, Willie Wastle,
Stand firm in my castle;
And a’ the dog o’ your toon
Will no pull Willie Wastle doon.’
is believed to be from the siege of Hume in 1650, and was apparently sent in defiance by the keeper of the castle to Colonel Fenwick. Fenwick must have laughed.